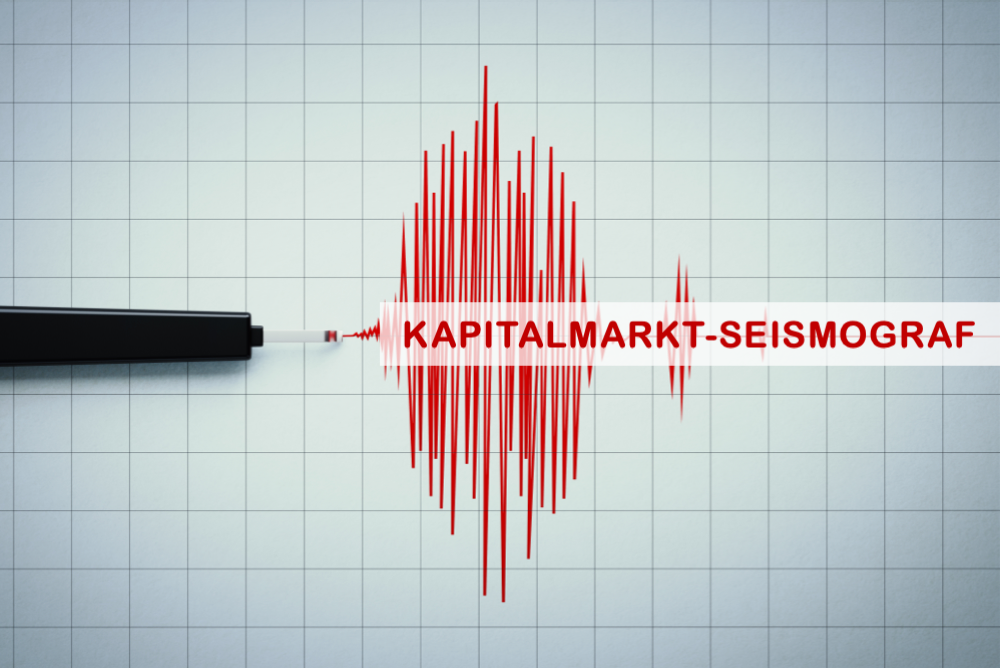 Disappointments over slow vaccine deliveries and, above all, fears of hedge fund bankruptcies had put pressure on the stock markets at the end of last week. As announced, Oliver Schlick, who as managing director of Secaro GmbH distils investment recommendations from the calculations of the capital market seismograph, analysed how the individual variables of the seismograph reacted to this. The question was: Should the turbulence of the last few days be taken seriously or not? 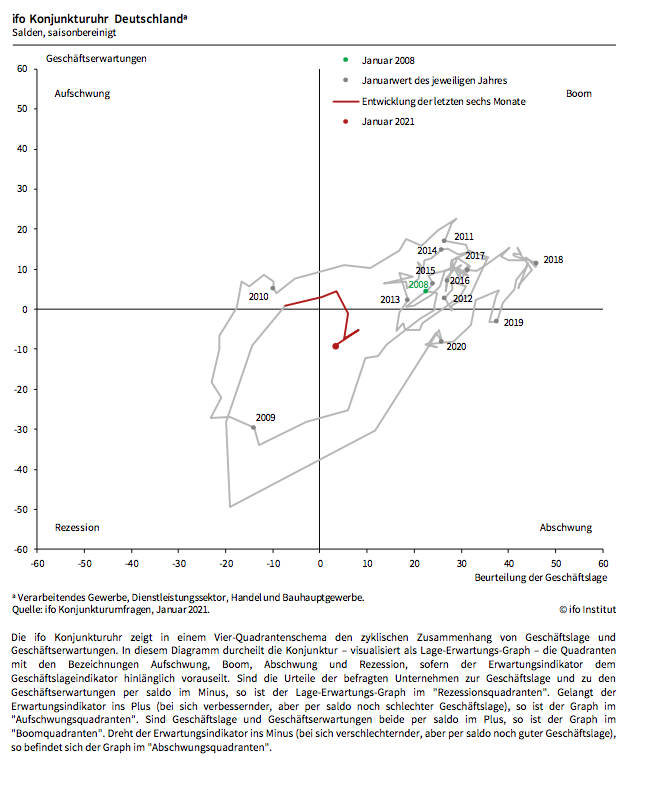 According to the ifo Business Cycle Clock, the German economy is moving back towards recession territory (Chart 1 below). The ifo Business Climate fell again in January, and business expectations in industry also declined again after a recovery in December. As a result, the ifo economic traffic light jumped back to "red" (chart 2). However, in view of the renewed loosening of the economy, this comes as no surprise.

For the private-wealth stock market indicator, this is not (yet) a disaster. Only a threefold decline would be tantamount to a sell signal.

What is important is that no one would have expected a sustained negative trend at the moment. In the past two weeks, we have attended a large number of online conferences in which banks presented their annual outlook for 2021. We will present a summary in the coming days. To start with, the consensus has rarely seemed as clear to us as it has this year. All strategists are firmly assuming an economic boom from the second quarter of 2021, or at the latest from the second half of 2021. The case for this is compelling: vaccinations dispel the covid spectre. Since there has been an extreme amount of saving in recent months, this money is rushing into consumption as soon as the infection situation eases. Fiscal support remains huge and continues to push growth. Last but not least, the investment motor will then also start up.

The problem: since all market participants seem to be assuming this positive picture, even slight doubts about it are causing the need for corrections in the capital markets. The massive fluctuations of the past few days underscore this emphatically.

As you know, the seismograph regularly estimates the probability of three market states in the coming month. Green" means that a calm market with a positive trend is expected. Investors can invest with peace of mind. "Yellow" indicates a turbulent market with a positive expectation - investing is fine, but be prepared for volatile times. And "Red" signals a turbulent market with negative expectation. The advice then is not to invest. 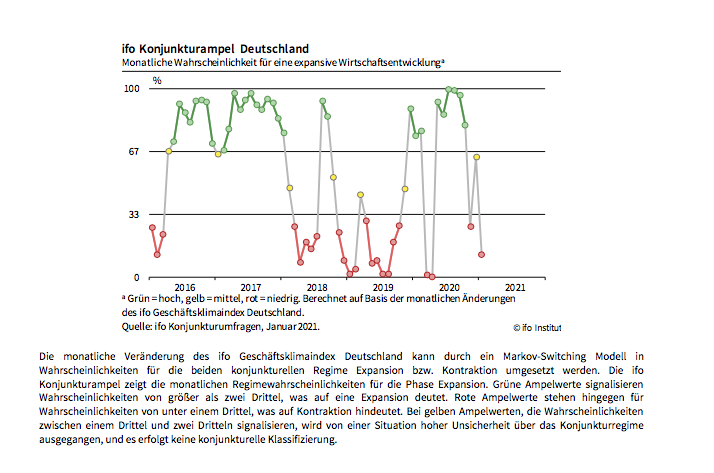 Since the end of April 2020, the probability of a positively turbulent market (yellow) has clearly dominated events. The approach had derived a clear recommendation to overweight equities from this and has maintained this offensive positioning ever since. By the beginning of this week, the green probability for calm, rising markets had risen again above 30 percent at the expense of "yellow". The probability of negative turbulence was insignificantly low. "The model's recommendation is therefore currently: significantly overweight," informs Oliver Schlick, who, as managing director of Secaro GmbH, is responsible for linking probabilities to investment recommendations.

It will now be interesting to see how the seismograph reacts to the current market fluctuations. We expect to report on this on Tuesday.

Since the Ifo economic indicator is not yet negative, but the valuation in the equity markets is now very ambitious, the corridor of the equity allocation advised by the private-wealth stock market indicator continues to be between 60 and 90 percent of the capital allocated to equity investments. Because the seismograph suggests that overweighting is advisable, the private-wealth stock market indicator continues to set the equity allocation at 80 percent.

We pointed out here a month ago that the only thing standing in the way of an even higher equity allocation at present is the valuation of the markets. We estimate that the fair value of the DAX is around 12500 points. According to this estimate, the DAX is only moderately overvalued, but the smaller stock segments (MDAX, SDAX) are clearly overvalued. In this constellation, the model provides for a maximum equity quota of 90 percent of the capital earmarked for equity investments.

For you as an investor, the following is important: The calculation of the fair value of the DAX is based on data material since 1954 and assumes, among other things, a medium-term return of growth rates in corporate earnings and interest rates to their long-term averages.

Under this premise, changes in interest rates hardly play a role in the calculation of the fair value. The reason is that while interest rates are low in times of low growth, so are growth rates in the economy and for companies on average. In times of high growth, interest rates rise, but at the same time profits grow faster. So the relationship between the rate of earnings growth and interest rates remains about the same, and little changes in the long-term fair value of the stock market.

What if this assumption no longer holds in the future?

Today, central banks have largely overridden market forces in the interest rate arena. In view of the high level of government debt worldwide, which will continue to rise in the future, many experts believe that the "zero interest rate era" will have to continue for a very long time - and largely irrespective of the economy and the rate of price increases (please read the coverage of the Lerbach Round in the current issue).

That would be a completely new regime. For then there would be the possibility that, over the next decade, while corporate profits resume rising at average rates, policy rates would still remain near zero.

In this case, the relationship between the two factors would change and equity investments would have to be completely revalued. If, for example, it were assumed that the "zero interest rate era" would continue for another ten years and earnings would nevertheless rise in line with the trend of recent years, the fair value of the DAX in our model would increase by 30 to 40 percent. The leading German index would then be significantly undervalued, the smaller indices only moderately overvalued.

We know, of course, that the most expensive proposition in the capital market is: this time everything is different. That is why we are reluctant to calibrate the private-wealth stock market indicator solely to this new regime. However, we note that this interest-free new world seems to be becoming increasingly entrenched in the minds of market participants. We will therefore present you with two stock market indicator allocation proposals for different regimes starting this month. 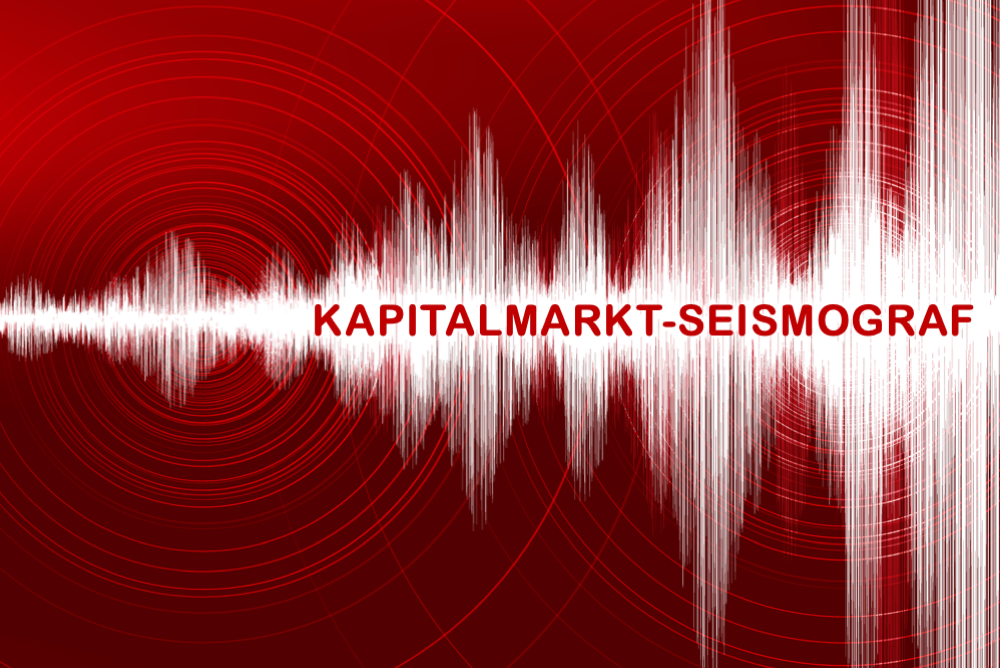 For more than two years now, we have been regularly informing you about developments on the capital market seismograph. Our aim is to help you better assess opportunities and risks on the stock market. At the same time, we use it to derive short-term changes in the equity ratio in the private wealth stock market indicator.

The editors of private wealth have collected 15 questions and presented them to the Lerbach Competence Group - a network of private bankers, family officers and asset managers.

The questions about the next German Chancellor, Italy's debt problem, Europe's future, the German labour market, autonomous cars and the Olympics were answered in past issues of this forecast series, as were the questions about the price development of oil, gold, Bitcoin and the exchange rate of the euro in relation to the US dollar?

In conclusion, the professionals share their assessments of the US election and BREXIT.

13 What final outcome do you expect for the BREXIT at the end of 2020 (probability)?

14 Who will be US President?

67% of the participants of the Lerbach competence circle believe in an election victory for Joe Biden. Only 33% see Donald Trump in front.

15 Who will win the elections for the US Congress?

The Congressional elections- House of Representatives and Senate.

The majorities there are important because on them depends how many of his plans the new/old US president can implement without problems.

All participants of the Lerbach Competence Circle believe that the Democrats will be able to defend their majority in the House of Representatives.

48 percent expect that the Democrats will also achieve a majority in the Senate. That would be a perfect "blue wave" and Joe Biden could rule through. However, the narrow majority - 52 percent - assumes that the Senate will remain in the hands of the Republicans. That would limit a President Biden's options.

The editors of private wealth have collected 15 questions and presented them to the Lerbach Competence Group - a network of private bankers, family officers and asset managers.

The questions about the next German Chancellor, Italy's debt problem, Europe's future, the German labour market, autonomous cars and the Olympics were answered in past issues of this forecast series, as were the questions about the price development of oil, gold, Bitcoin and the exchange rate of the euro in relation to the US dollar?

Today the professionals take a look at the German and the American stock market.

Opinionleader Christian Klein 166
With its rules on taxonomy, the EU will initiate…

How to earn it Cornelia Knust 211
Expansion. The Thannhuber family of entrepreneurs…

How to earn it Klaus Meitinger 172
Innovation. The only effective climate protection…