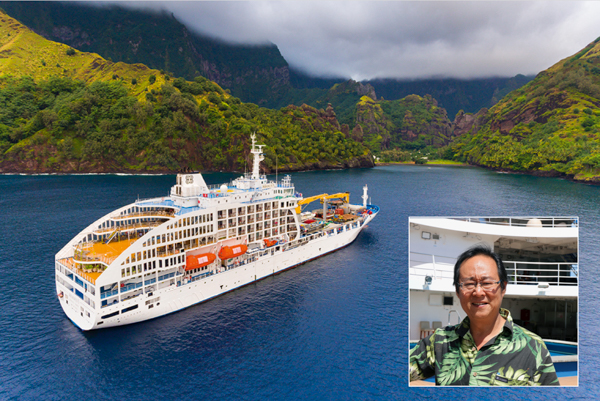 Entrepreneurship. The Wong family in Papeete, Tahiti, has developed a very special business model out of necessity. Their Compagnie Polynésienne de Transport Maritime combines passenger and cargo shipping, heading for two unusual destinations in the South Pacific: the remote Marquesas Islands, where painter Paul Gauguin is buried. And the island of Pitcairn, where the mutineers of the "Bounty" once hid and where their descendants still live today. 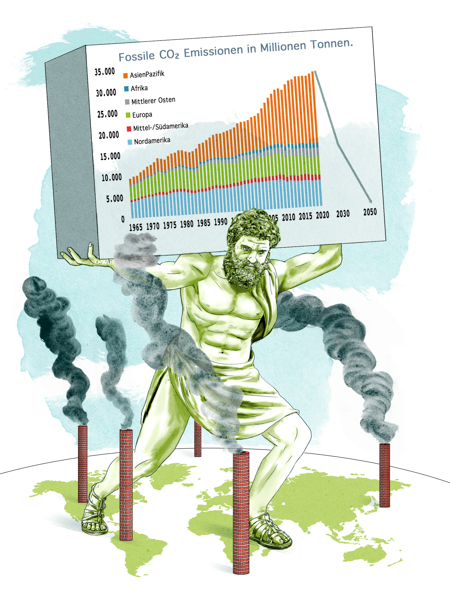 In the chart above, only CO2 emissions from the fossil fuels coal, oil and gas are listed. If other sources such as cement production or cattle breeding were also taken into account, they would be around ten percent higher. Source: BP

Stop climate change. Climate change is a global problem - and can therefore only be solved internationally. Strategies that rely on national solo efforts, on renunciation and bans will not work. What is needed are entrepreneurial initiatives and innovative processes that make it possible all over the world to remove CO2 from the atmosphere or convert it into other raw materials.

Written by Klaus Meitinger on 25 November 2019.

in a few weeks, the new decade will begin. The last decade has been shaped by the disappearance of interest rates, the outstanding performance of the US equity market and the recognition that the world has a real problem with climate change. This is the starting point for strategic thinking on the 2020s.

Thinking ahead, global warming will remain the greatest socio-political challenge. We see a halfway realistic hope in the "self-defeating prophecy". If the lung doctor says to the chain smoker: "You will die at the age of 50", this could shake the smoker to such an extent that he radically stops smoking - and turns 70. Only in this way will there perhaps still be a chance to refute the terrible and correct forecast of a climate crisis. However, the price of CO 2 would now have to be drastically increased very quickly. Only then will it be possible to economically implement the technological solutions that already exist today on a global scale (please read page 32ff).

For investors, the end of the interest rate is the most important new date. Our panel of experts - the Lerbach Round Table - is convinced that this will not change in the next decade. Now that bonds and real estate already reflect this in prices, the last candidate for a complete revaluation is the broad equity market. However, fears of recession and earnings slumps currently stand in the way of this (page 42 ff). This can lead to turbulence again. These would then be opportunities to buy. It is also interesting to note that in the past, the best markets of one decade in the next were usually no longer in the lead. If that remains the case, the coming decade could not belong to Wall Street, but to emerging markets and frontier markets (pages 48 and 88).

Our publishing house will also reposition itself in the future. Starting next year, we will present new ideas, strategies and stories from the network on our homepage (www.private-wealth.de) two to three times a week, thus massively expanding our online reporting. However, the following still applies: private wealth is a curated platform. The content must have real relevance for entrepreneurs and investors. This is of course free of charge for you as a subscriber. We would be very pleased if you accompany us on this way and visit our homepage regularly.

Now it's all about the whole thing.

Friday after Friday, pupils and students from all over the world, inspired by the Swede Greta Thunberg, will take to the streets to fight for a future in which global warming will be limited to two degrees, better still to 1.5 degrees.

Unlike many "political professionals", the young generation has understood exactly what needs to be done. It is about drastically less consumption and a fair global burden sharing. Above all, we must ensure that 98 percent of fossil fuel reserves remain in the soil. Otherwise it won't help if we save here in Europe (page 114 of the print edition). The industrial nations will have to pay just as much for this as for the preservation of the CO2 sink in the rainforest. How this should work in a world that is focused on growth and increasingly nationalistic in its thinking is still a mystery to us. Can we really do this?

Especially when we are in despair, the stories of entrepreneurs who owe their success to sustainable innovations are encouraging (page 114). We were particularly electrified by the great progress made in nuclear fusion. This is a real hope for infinite, environmentally friendly energy (page 94). It is frustrating, however, that the world has not bundled all its research capacities to help this technology achieve its breakthrough.

What can you do yourself? Capital must put pressure. Ask your investment advisor to invest your money only sustainably and with a view to climate change (page 52 of the print edition). As philanthropists, make sure that your efforts trigger a domino effect (page 80 of the print edition). And when you enjoy your hard-earned prosperity, you compensate for any larger CO2 footprint that may have been created on Atmosfair or other platforms.

But above all: Vote only for politicians - no matter which party - who are committed to a genuine, worldwide solution to the climate problem and do not hide behind the negative consequences of such a policy for the economy. And support the young generation. Anyone who pretends there's an easy, painless way out doesn't deserve your voice. We need true leadership - to intensify our efforts, to say goodbye to wishful thinking, to end the tendency to postpone and deny the unpleasant truths. It's about much more than just protecting our portfolios from the impact of climate change. It's about our children, our species. It's a whole thing.

Written by Klaus Meitinger on 11 December 2018.

Der Bär rages under the radar.

There is only one topic in the financial community at the moment: Has the global upswing in stock prices that has lasted since 2009 come to an end and will we have to adjust to falling prices, a bear market, in the future? However, this discussion always relates to the major indices. Wer takes a closer look, it recognizes that the bear has already struck in large parts of the market long ago. The share prices of dozens of well-known companies are 40 to 60 percent below their highs at ersten Halbjahr. Among them are many that belong to the crème de la crème of German industry - Bayer, Covestro, Siltronic, Osram, Schaeffler, Wacker Chemie and many, many more. Anglo-Saxons speak in this case of a Stealth Bear Market - a bear, which rages under dem Radar of those, which are interested only in the broad market.

This is what we feared at the beginning of the year.

while everyone's worried about the Atlantic, disaster threatens our own front door. It's about the euro. When Germany agreed to monetary union, the rules were clearly defined. No Member State is liable for the liabilities of the other. The central bank is prohibited from directly acquiring government bonds. And they all commit themselves to respecting deficit limits.