The bill is coming. 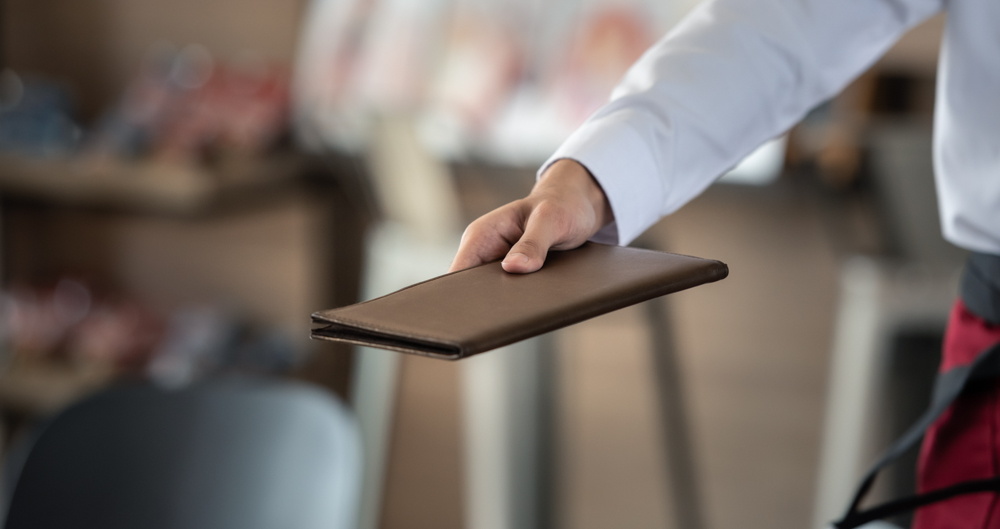 Monetary policy. In recent years, the printing press has become the tool of choice to combat economic crises. Central banks bought bonds with "freshly printed money" to stabilize the banking system in the 2008 financial crisis and cushion the impact of the current pandemic. Meanwhile, the balance sheets of the FED and the ECB have grown to nearly double-digit trillions. Who is footing the bill?

Whenever disaster threatens, the cavalry comes. In the economy, the central banks have been doing this job for years. "And even if the rescue policy of recent years has been subject to repeated criticism, the successes to date speak for themselves: despite severe turbulence, the economy has been able to return to a growth path each time and make up for the losses in prosperity," explains Carolin Schulze Palstring, Head of Capital Market Analysis at Metzler Private Banking.

Nevertheless, a sense of unease remains. The idea of money being created out of thin air to solve all (financial) problems seems too good to be true. Long-lasting crises would become a thing of the past, and no one would have to bear the cost. "Questions inevitably arise," Schulze Palstring makes clear: "What is the price for this 'modern' way of dealing with crises? And who will have to pay it in the end?"

To get to the bottom of possible answers to these questions, it is first worth taking a closer look at the past two years. In order to limit the spread of the coronavirus, the emergency brake was pulled several times economically. Never before have governments around the world simultaneously imposed a forced pause on their own economies. Economic processes were thrown out of gear, people lost their jobs, supply chains are still disrupted, and the price structure is severely distorted. As a result, the global economy contracted by more than three percent year-on-year in 2020 - a negative record in post-war history.

Equally record-breaking, however, is the speed with which the losses in prosperity were recovered. In the People's Republic of China, they were recovered just one quarter after the outbreak of the pandemic, in the spring of 2020. The United States had to contend with lockdowns for longer, but thanks to an early vaccination campaign was able to significantly reduce Corona case numbers from January 2021. U.S. GDP then reached pre-crisis levels about a year after the outbreak of the pandemic, in the second quarter of 2021. And Europe is expected to be ready by early 2022.

So, compared to the sluggish pace of economic activity after the 2008 financial crisis, the post-Corona economic recovery happened at a rapid pace. "In our view, the recovery is likely to continue in the coming year. Although temporary setbacks - depending on further pandemic events - cannot be ruled out, they are unlikely to be as severe as the initial economic slump in 2020," predicts Schulze Palstring, "so the acute phase of the economic crisis is over - even if the virus is still affecting large parts of social life."

We have the courageous intervention of central banks and governments to thank for the rapid economic recovery. For this broke a vicious cycle of falling demand, less production, rising unemployment and further falling demand. Governments fully or partially compensated for revenue shortfalls in the private sector and avoided mass unemployment. Central banks, through their increased bond-buying programmes, ensured that financing costs fell to new lows despite debt growth.

One thing is certain, however: the bailouts have come at a price. The national debt ratio in the industrialized countries shot up by more than 20 percentage points within a year. As a result, many observers worry that the debt burden may eventually become unsustainable for many countries.

"Granted: High debt can become very dangerous," Schulze Palstring analyzes, "but under the current circumstances it is not an acute problem." Insolvency, he says, is when the debtor is no longer able to meet his due payment obligations. "Paradoxically, however, the pressure to repay has not increased much after the Corona crisis - despite the increase in debt," the expert explains. This is because a large part of the issued government debt disappears into the balance sheets of central banks. 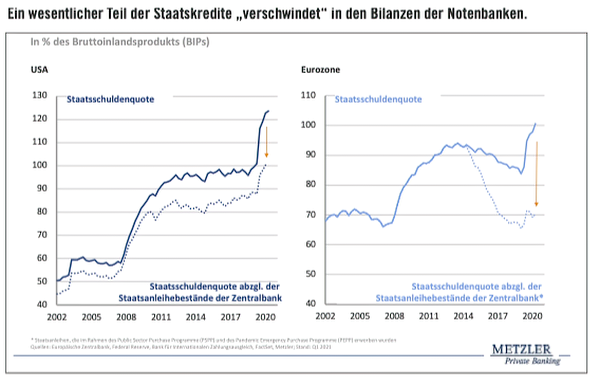 The question of repayment is also not acute for these debt instruments, since the central banks are reinvesting maturing holdings for the time being. Moreover, the monetary authorities are creating so much additional demand for bonds with their large-scale purchases that the market interest rate is being kept artificially low. "Under these circumstances, we assess the acute risk of a debt crisis - at least in the industrialised countries - as low," Carolin Schulze Palstring sums up.

Nevertheless, high government debt can have serious consequences in the medium to long term: Central banks are trapped in their loose monetary policy, the scope for fiscal countermeasures in future crises has narrowed, and today's society is living at the expense of future generations.

So how might debt be reduced in perspective? The intuitive answer is to spend less money than is collected. In terms of the national budget, this would involve either harsh austerity in the form of spending cuts or an increase in revenue via tax increases.

"Both paths are enforceable in a democracy, but they cost votes," Schulze Palstring reflects. Apart from that, governments run the risk of stalling the economy and thus making the situation even worse should they overdo it with budget consolidation.

A look at history shows that there is another way. Over the past 150 years, many countries have run up large debts. Some managed to reduce their debt ratios again. Others, the debt expanders, failed (chart below). The intriguing question in this context is: How did the two groups differ? 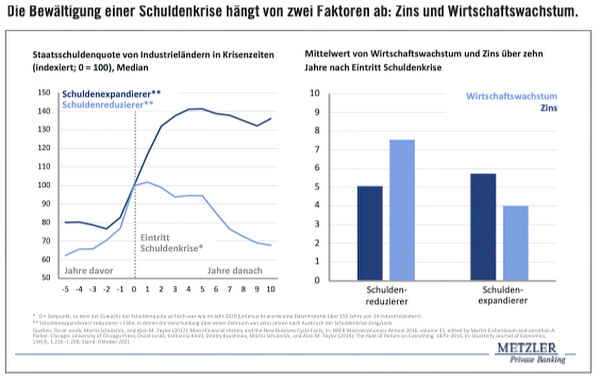 "The key factor was the macroeconomic environment," Schulze Palstring analyzes. In the cases where the debt ratio had fallen again, interest rates (financing costs) were lower than economic growth. As a result, debt rose less rapidly than gross domestic product (GDP) in subsequent years. The public debt ratio - debt to GDP - was lowered, and countries were able to comfortably "grow out" of debt.

In the group of debt-expanders, on the other hand, the interest rate was much higher than economic growth, further exacerbating the debt situation. "So it is important to keep growth high and interest rates low if it is to work to avert debt crises," Carolin Schulze Palstring concludes. What are the chances today?

"Growth prospects currently depend heavily on political decisions," explains the strategist. So far, the economic upswing has been largely bought by government debt. It is now important that the economy can stand on its own two feet again and grow on its own. Generous state aid increases the risk that insolvencies will be postponed and over-indebted companies will tie up resources for unproductive purposes.

Political leaders must therefore not miss the moment to pull back. "Crisis management based on the watering-can principle is no longer necessary at present," Schulze Palstring is convinced: "Now is the time to focus attention on investment in order to permanently increase the growth potential of the national economy." The new infrastructure package in the US and the European reconstruction fund can provide important impetus in this regard. If the private credit and investment cycle were then to pick up, much would be gained.

But even if real growth rates then remain lower than hoped, the opportunity for debt relief is not lost. For nominal economic growth includes not only the quantity of goods produced, but also the prices at which these goods are sold - and here the inflation trend is decisive.

Currently, the US and Europe are experiencing a surge in inflation. However, economic experts largely agree that the exceptionally high inflation rates will only be temporary. As soon as the pandemic situation eases, according to the majority opinion, the aforementioned special effects should also lose their effect and inflation will return to moderate levels.

"Nevertheless, we are unlikely to return to the inflation levels of the past decade. Rather, inflation rates are expected to reach or even exceed the two percent mark on a sustained basis," Schulze Palstring suspects. This is due to high money supply growth (see chart below), massive government budget deficits and a likely shortage of labour. "In addition, long-term trends such as demographics and globalization are reaching a turning point or at least taking a pause. They are putting less downward pressure on prices than before." 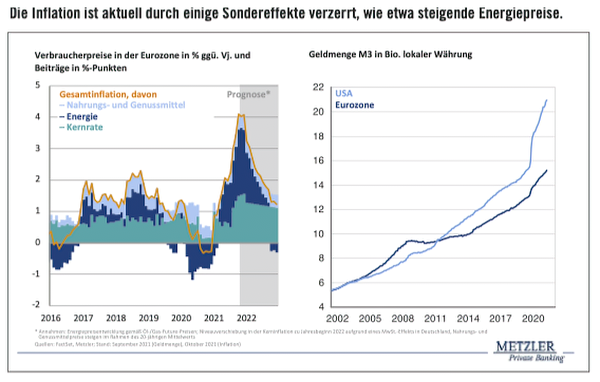 Debtors are the main beneficiaries of higher inflation rates. Since debt is a nominal quantity, less has to be repaid each year - in purchasing power terms. So successive inflation would be good news for public finances, as it would allow the mountain of debt to be paid off without anyone having to be explicitly asked to pay.

"The bill is then paid by savers, however, who are gradually expropriated through negative real interest rates - nominal interest rates below the rate of inflation," Schulze Palstring points out. An example shows the devastating effects: A supposedly safe investment in a ten-year German federal bond worth 100,000 euros leads at the current interest rate level at the end of the term to a real asset loss of over 18,000 euros - assuming that the market participants are right with their inflation expectations of about two percent per annum. However, the strategy of financial repression only works as long as inflation does not get out of control. Although debt would then lose value more quickly, in return central banks would be forced to raise interest rates quickly and sharply. "That would be impossible to do without risking a systemic crisis," explains Schulze Palstring, "the states are more dependent than ever on low interest rates.And investors in the stock and real estate markets would be sensitive to interest rate changes."

Fortunately, the expert says, uncontrolled price rises are not yet foreseeable today. "But we still expect real interest rates to remain negative for many years to come. The key question for investors is therefore how to preserve assets in this environment."

Her answer is clear: "There will be no money to be made with nominal values for the foreseeable future. On the contrary, there is often even the threat of a certain loss. In this environment, it is advisable to keep an overweight in substance assets, for example in shares."

Even in the event of a systemic crisis caused by inflation - which is extremely unlikely from today's perspective - private investors would be better off with substantial assets. "After all, equities securitize a share of the productive assets of an economy. Nominal assets, on the other hand, are just a pure money promise that can also be repaid in devalued purchasing power," explains Carolin Schulze Palstring and concludes: "Not for nothing is it said that inflation is a way of halving a banknote without hurting the paper."

How to earn it Silke Lauenstein 43
"The best is yet to come," said Wolfgang Trier a…

How to earn it Gerd Hübner 75
Expansion strategy. Arne Weber and his wife Fan…