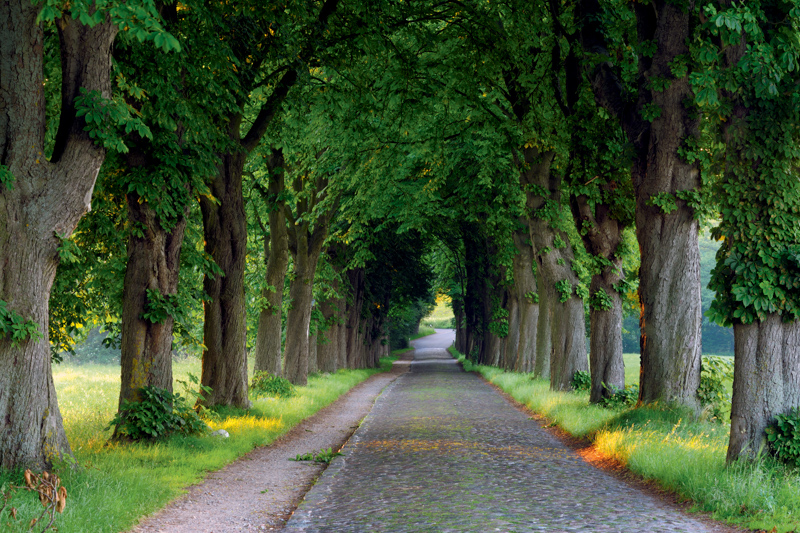 Stock market strategy. The dynamism of the global economy has slowed noticeably. Drohen will there be a slump in company profits and share prices in the future? Carolin Schulze Palstring, Head of Capital Market Analysis Metzler Private Banking, explores the situation.

On average, people spend 374 days of their lives waiting. He's waiting for the train, the cash register or a website to load. Usually his patience pays off. Not so in Samuel Beckett's play "Waiting for Godot": Sitting on a country road, the everyday life of two vagrants consists solely of waiting for someone named Godot. They don't even know the person - they don't even know if they exist.

Waiting for Godot is in vain in the end. He never appears.

"On the capital markets, many investors have been waiting for quite some time for the next major crisis, the next recession, the next price slump - before investing. Until a few months ago, this wait-and-see was quite expensive given the good global economy and steadily rising share prices. But now more and more investors ask me - is the cycle over?"

So is the crisis coming in 2019? "In order to give a well-founded answer, we need to take a close look at politics, the economy and the debt and financial cycle. We took a very close look at this," explains Carolin Schulze Palstring, Head of Capital Market Analysis at Metzler Private Banking.

A major reason for the current uncertainty among investors is the political factor. "The fact that political uncertainty was higher than ever until recently is clearly due to Donald Trump's America First campaign." In terms of trade policy, the US President no longer distinguishes between traditional allies and other third countries. Neighbouring countries such as Canada and Mexico were affected by customs duties or customs threats, as were China, Japan and now the European Union. "That's irritating - after all, the successes of globalization are at stake."

Increasing nationalism is also making itself felt in Europe. The Brexit Theater is a never-ending story. But also movements like the Lega in Italy, the Rassemblement National (formerly Front National) in France or the AfD in Germany stand for a critical attitude towards the European Union. "The populists are likely to win a hefty number of votes in the European elections in May, further polarising the political climate in the international community", meint Schulze Palstring concludes, "An improvement in these political risks is hardly to be expected for the time being".

Will this have a lasting negative impact on the outlook for the economy? "In fact, the economy has already cooled noticeably. The central question that many investors ask themselves at this point is: is a recession coming, or is it not?

The OECD's Composite Leading Indicator (chart below) - an early indicator for the global economy - provides a good indication of the economic outlook. If the values are below the 100-point mark, this means that the economy is currently growing more slowly than in the trend of recent years. Conversely, values above 100 points signal above-average growth. 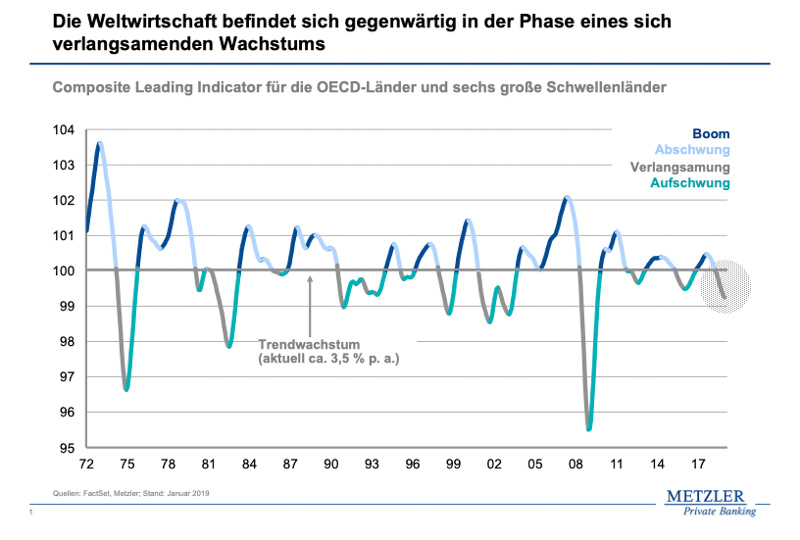 The indicator is constructed in such a way that it allows conclusions to be drawn about the respective phase in the economic cycle. The upswing is followed by a boom, then by a downturn and then by a phase of slowdown, which can also be a recession. From there, a new cycle begins. "The indicator is currently in a phase of slowing down, a so-called 'global slowdown'," explains the expert. "This sounds more dramatic than it is, however, because a slowdown in the economy is quite normal in any economic cycle. These phases are not always accompanied by sustained economic damage."

For example, just three years ago there was a similar damper. However, the economic slowdown at the time did not end the long-term upward trend of the economy or the stock market. How's it gonna end this time?

"Real crises in the past were mostly the result of massive imbalances in the overall economy", erläutert Schulze Palstring. These include above all real estate price excesses in combination with over-indebtedness in the private sector. Often the process was similar: In the course of financial upswings, market participants tend to take high risks. If share prices or real estate prices climb, this invites you to take on more and more debt - especially as long as interest rates are low. If these rise again, the bubbles burst and become a catalyst for economic collapse.

"In order to be able to classify this, we have determined the so-called financial cycle - on the basis of studies by the Bank for International Settlements. The financial cycle encompasses the long-term fluctuations of three variables that have often been at the root of financial crises: the real volume of private sector credit, real house prices and the ratio of private credit to economic performance. In the past, the financial cycle almost always peaked shortly before the economic collapse."

Where are we today? "In the U.S. and the Euro-Zone, the curve is upward, but there are no signs of a bubble forming at this point. It can only be deduced that the adjustments to the excesses surrounding the financial crisis have been completed and that the dynamics of real estate prices and credit growth are picking up again. This means that both economies are still a good way off the next peak in the financial cycle. Neither the eurozone nor the USA currently have the typical conditions for a severe financial crisis" (chart below). In order to avoid a new bubble formation in the future, according to the expert, central banks as well as politicians should take countermeasures. 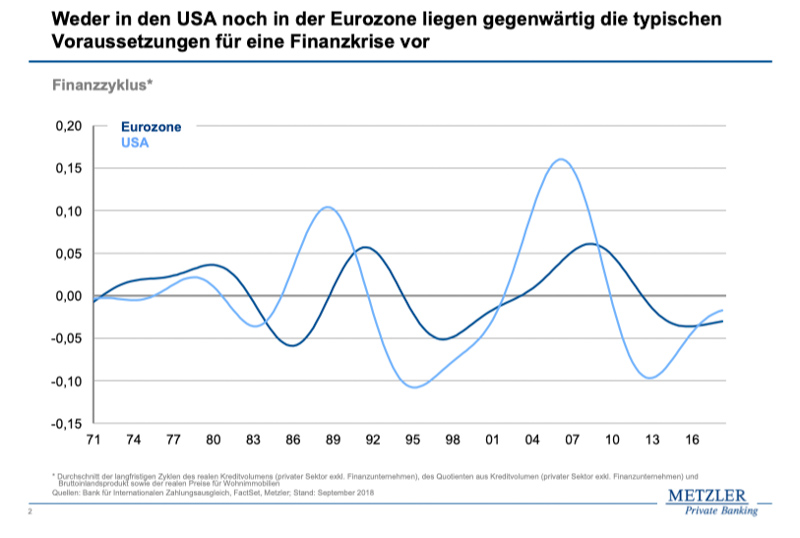 "Curiously, however, exactly the opposite is happening: the US Federal Reserve has de facto declared the phase of interest rate hikes over, the European Central Bank (ECB) has cancelled the interest rate turnaround for the time being. This is good news for the stock market in the short term. In the longer term, however, this may give rise to significant risks."

It remains to be hoped that monetary policy will not fall into the same trap as it did in 1987 and 2001, when the central banks relaxed the financing conditions out of consideration for the financial markets and thus encouraged the formation of a bubble. Finally, a few years later, this led to much more serious crises. "So even today, postponed is not canceled."

In her previous analysis of financial cycles, however, the expert did not take China into account. "Unfortunately, no comparable financial cycle can be determined for China due to a lack of data history of sufficient quality. But because the Middle Kingdom now accounts for around 15 percent of global economic output, it cannot be ignored."

Individual components, such as the indebtedness of the private sector, allow at least a revealing look at the status quo. 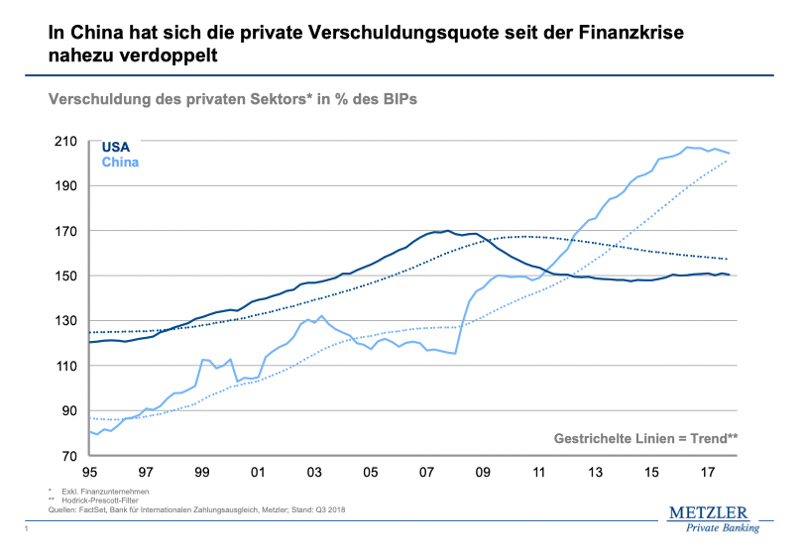 "While debt ratios in the USA have been noticeably reduced since the bursting of the credit bubble in 2008, they have risen sharply in China. This is mainly due to the fact that the government in Beijing always opened the credit gates as soon as the Chinese economy fell into difficult waters. At currently 204 percent of GDP, the private sector's debt ratio has almost doubled compared to 2008 - a clear warning signal."

Could the Middle Kingdom trigger the financial crisis 2.0? "China undoubtedly has a debt problem," says Schulze Palstring. Nevertheless, in many respects the situation is not comparable with the dramatic situation in the USA in 2008. Chinese companies, for example, are predominantly indebted domestically, and the sale of credit risks in the form of securitisations is less common in China than in the western world.

"The transfer risks to other countries are therefore likely to be much lower in the event of a crisis. In addition, the Chinese central government, with its planned-economy structures, has much more leeway to intervene. Through the state-owned banks, it can control the savings of the population, direct the granting of loans and restrict the movement of capital at any time," explains Schulze Palstring. "Against this background, it can be assumed that the Chinese debt bubble will not burst in the short term. The government may prefer a controlled reduction of debt."

First attempts in this direction have already been observed. China's government has recognized that the credit-financed growth model is gradually reaching its limits, and in 2018 began to gradually reduce debt. In view of this, it is not surprising that the Chinese economy lost considerable momentum last year. The well-known escalation in the Sino-American trade conflict, which the government had presumably not expected at the beginning of the year, provided additional headwind.

"As in 2016, fears are now circulating that China could experience a sharp slump in growth. We do not share this fear." Following the usual pattern of action, Beijing has already put together an economic stimulus package and loosened monetary policy. Specifically, new infrastructure expenditure was announced, taxes were reduced and additional liquidity was injected into the banking system via lower minimum reserve ratios. The government also "encouraged" state banks to lend more to the private sector. "All these stimuli should help stabilize the economy with a delay."

There are currently many indications that economic activity in China is accelerating again after a temporary period of weakness. European companies that export a lot to China should also benefit from this. "The chances are therefore good that the economy in Europe will also stabilise or even pick up slightly in the further course of the year," concludes Carolin Schulze Palstring.

In the United States, on the other hand, economic growth is likely to slow down in the future, mainly because the positive effects of the tax reform are gradually coming to an end. Leading indicators are already signaling that the US economy is losing momentum this year. "This prompted the Fed to pause further interest rate hikes for the time being. However, it can only afford such a wait-and-see attitude as long as the inflation risks do not increase," erläutert Schulze Palstring continues, "Against this backdrop, a moderate slowdown in economic growth in the United States is almost good news for investors.

The capital market expert concluded: "The global economy has clouded over noticeably and the risks to future development have increased. Nevertheless, there is no reason to believe that the slowdown in growth will inevitably lead to a severe crisis. Even in a somewhat weaker growth environment, the earnings of many companies can ultimately continue to rise."

Investors, she advises, should therefore not be afraid of economic fluctuations. "The world economy is an imbalance system that is stabilized by the chronic flight forward - from one instability to the next', quotes Schulze Palstring the philosopher Peter Sloterdijk and concludes: "2019 allen Unkenrufen zum Trotz should be a good stock year. ®

Editorials Klaus Meitinger 59
Dear readers,at private wealth, it is our goal to…

Editorials Hanns J. Neubert und Ludger Wess 125
In the chart above, only CO2 emissions from the…

Editorials Klaus Meitinger 176
Dear Readers, in a few weeks, the new decade will…