Florian Dillinger remembers this call well. In the middle of the financial crisis of 2008, a businessman from the network came forward. He had pledged two million euros to a venture capital fund and already paid in one million. When the capital call for the second million comes, he cannot afford it. He is desperately looking for someone to assume this obligation. But in times of crisis, capital is scarce and the willingness to take risks is low.

Only Florian Dillinger agrees. He pays 10000 euros for the contract and makes the contribution of over one million. "De facto I have taken over the entire commitment for 51 percent, i.e. at a discount of 49 percent. Retrospectively, this was one of the best deals I've ever done. And it inspired me to take a closer look at the secondary endowment policy market."

Through his public limited company Matador - Dillinger is CEO and Chairman of the Board of Directors and holds almost 40 percent of the shares - he had already invested in various facets of private equity for three years. "I always found this interesting, because private equity investors usually create real added value. They want to initiate a positive development in the respective company - on the cost side, by expanding and expanding the business model or by expansion or acquisitions. Only if they succeed in doing so will they earn money."

Dillinger explains how this can work using the example of the Munich clothing company Schustermann und Borenstein - after all a multi-million turnover company. About five years ago, the owners took a private equity investor on board for the first time. The investor's cash injection will enable him to invest in a logistics centre, further locations and IT infrastructure. After three years, the share is sold to a second PE fund. This fund supports the internationalisation of the e-commerce division BestSecret.com, which has existed since 2007, as well as Big Data and personalisation. "PE investors are not the evil locusts they are often portrayed as. It is always about making existing businesses more profitable. Today, Schustermann and Borenstein are worth much more than they were five years ago," explains Daniel Schustermann.

Because this has often worked similarly well in the past, the investment results of most private equity houses also look convincing. "In the last ten years the yields across all market segments have averaged just under twelve percent," informs Detlef Mackewicz, an investment consultant from Munich specializing in private equity who also supports Matador in the analysis.

As the name "private equity" suggests, this form of financing provides equity capital to companies that are usually not yet listed on a stock exchange. "In other words, the real economy is supplied with growth capital," explains Mackewicz.

Participating in this idea is interesting for private investors. This is another reason why 2017 was the industry's most successful year to date, collecting 453 billion dollars.

But an investment also holds challenges. "First of all, the value drivers are geared to a medium- to long-term horizon. The typical term of the funds is therefore ten years with an option to extend it by one to two years," Mackewicz explains, adding: "Scientific studies show that an investor only receives back his paid-in capital after an average of seven years. That's a long road that can take many things astray."

After all, private equity can take place in very different situations and company phases - with completely different demands on managers' skills. In the venture capital business, innovations and markets have to be assessed that are still at the beginning of their development. In the buyout business, on the other hand, the focus is on restructuring potential and opportunities to increase efficiency in established companies or spin-offs from large companies.

Not every management team succeeds in this equally well. The differences in investment performance between individual providers are correspondingly large. "Since 1990, the funds have generated annual returns of more than 30 percent on invested capital in the best quarter. The worst were minus five percent", Detlef Mackewicz informs and concludes: "There is hardly another asset class where the discrepancy between funds is so great. The key to success is therefore to succeed in separating the good from the bad."

But that's not so easy. "With classic private equity, investors can only take a close look at the performance of management teams from the past. They have no insight into the investments themselves. Ultimately, they only invest in an empty shell that is later filled by the manager," explains Dillinger, adding: "It is precisely these two weak points - a lack of transparency and long maturities - that can be avoided when investing in the secondary endowment policy market for private equity investments.

The secondary investments sub-market basically comprises the purchases and sales of private equity fund units that have already been subscribed. "The large advantage lies in the fact that the Secondary buyer can judge the existing Portfolio with a documented history at the entrance time much better, than this was possible for the primary fund at the time of its entrance , describes Dillinger: ?Because now comprehensive Research is possible. The companies are largely known, their development can be analysed and included in the purchase decision. As a result, secondary investments also have a better risk profile than primary transactions".

Because only positions that have existed for several years are acquired, the investment process can also be accelerated. "Investors can expect dividends earlier. The return of the capital invested is often already after three to five years."

There are two reasons why the return is at least as high as on the primary market. Firstly, the costs are lower because the fund has a shorter remaining term and the management fees of the first few years have already been paid by the original investor who is now selling his shares. "The so-called J-curve effect is completely or partially eliminated," explains Dillinger.

Secondly - and even more importantly - the transaction often involves significant discounts to the assumed enterprise value. "The initiative comes from the seller, who wants to sell his share." Dillinger has observed that five different motives usually play a role here.

Firstly, there are of course economic reasons. "These are emergency sales when the obligations entered into, i.e. the capital calls, cannot be serviced." Sometimes, however, even investors without necessity reduce the number of funds in the portfolio for strategic and tactical reasons. "In this way, they want to reduce the intensity of support and the communication effort.

Others sell because they want to change their investment focus. "For example, some investors are currently divesting their holdings in mega buyout funds in order to turn to funds that invest in smaller and medium-sized companies.

Some investors are also withdrawing from the asset class for regulatory reasons. "Banks, for example, have to reduce balance sheet risks, sell insurance to comply with Solvency II rules." And last but not least, tax reasons make some sales necessary. "Inheritance tax issues are the classic for family offices," explains Dillinger.

According to the expert, secondary transactions should also be viewed positively in macroeconomic terms because they provide liquidity to the entire private equity market. "Many investors would not make capital available to the economy via private equity if this path did not exist". The fact that last year a new record volume of 59 billion dollars was also achieved in secondary transactions is therefore "very, very positive".

However, the massive discounts of the past are no longer realized today. "The biggest discounts naturally result from emergency sales. After ten years of bull market, however, these have become rare. If the focus is on other sales motives, only single-digit percentage discounts can be negotiated," explains Detlef Mackewicz.

Isn't today not such a good time to invest in Secondary Private Equity? "On the contrary," Detlef Mackewicz makes clear: "We all don't know the future. But if there were a slump in the markets and an increase in discounts, it would be too late for an investment. It will take some time before a new secondary fund is launched. It is crucial to invest regularly - as Matador does. Then investors can be sure that, if the worst comes to the worst, some of their funds will be ready to make the big bargains."  ®

In view of the minimum investment amounts of several million euros, secondary private equity is generally only an investment field for institutional investors. "I simply couldn't see why most other investors should be denied this attractive segment. That's why we founded Matador," says Florian Dillinger, President of the Board of Directors and CEO of Matador Partners Group AG.

The share of the holding company is listed in Bern and Frankfurt (ISIN: CH0042797206). A secondary private equity portfolio that is broadly diversified according to industries, regions and economic cycles is available to all interested parties without a minimum investment restriction. "Now anyone can add a pinch of private equity to their portfolio. We are currently invested in 16 different secondary private equity funds and thus indirectly in more than 500 companies".

In terms of diversification alone, according to Dillinger, this is a sensible step. Advantages compared to funds are the liquidity associated with the stock exchange listing and the attractive dividend yield of four percent. "Ongoing distributions are important to us. Every investor should regularly see how good our investments are. In the first half of the current fiscal year, the net asset value of the company already rose by 6.8 percent."

In order to continue to grow, Matador will carry out regular capital increases. When selecting investments, Dillinger follows a simple but successful principle: "We participate in promising secondary private equity vehicles from various sectors and regions, with a focus on the USA and Europe, after completing the J curve (chart, page 75). In this way, we promptly receive returns from our investments, which we pass on to our shareholders in the form of dividends. And we analyze them very carefully: diversification and risk minimization are clearly in the foreground, along with high double-digit return opportunities. After all, I myself have a stake of almost 40 percent in Matador."

How investors avoid the J-curve effect.

Anyone who invests in a private equity fund must first accept high start-up costs. After all, the management has to be paid while it searches for the first interesting investments. In times like these, when a lot of capital is pushing into the PE sector, it can take a long time for the first returns from successful sales to exceed the cumulative start-up costs and for investors to reach the profit zone. This development is known as the J-curve effect. By investing in secondary market shares, this effect can be avoided or at least significantly reduced. "Ideally, the first companies are already ready for sale. Then the investor makes profit from the first day on , describes Florian Dillinger. 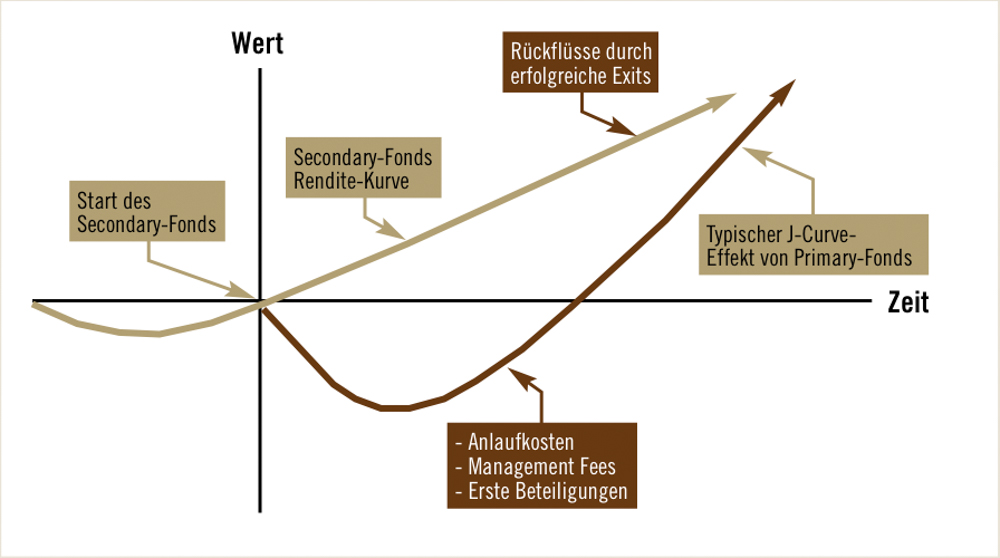