First ray of hope in the economic indicator. 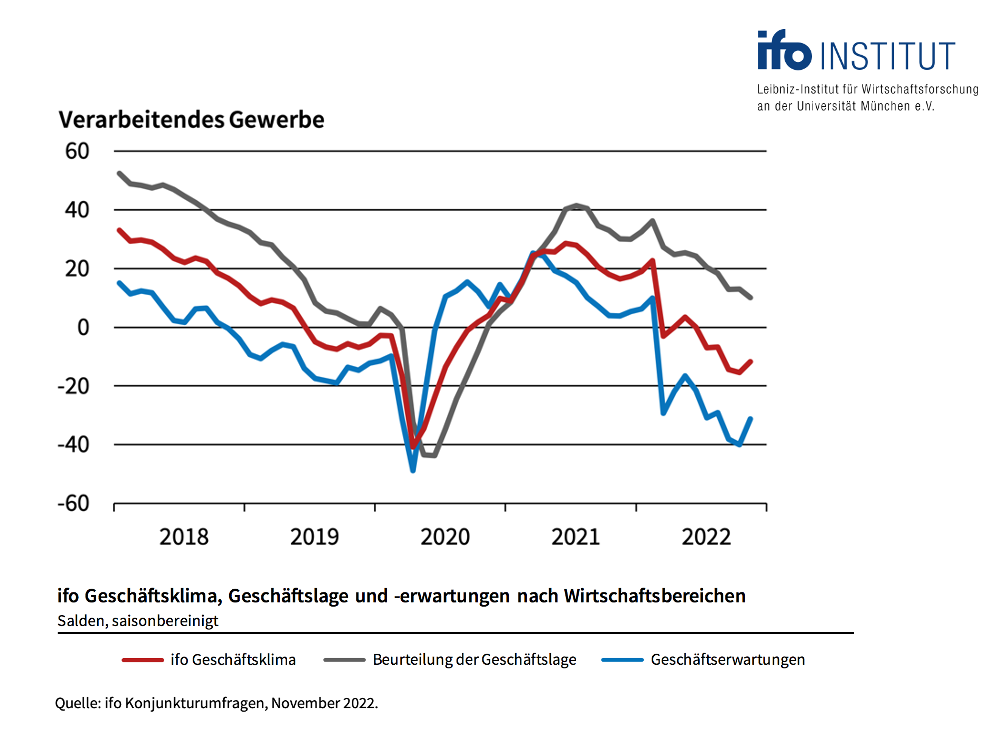 In November, companies in industry as a whole became somewhat more optimistic again. Although the current business situation has deteriorated, this was to be expected in view of the negative business expectations for the next six months in the past ifo surveys.

On the positive side, business expectations for the next six months in November are now less pessimistic. In this part of the survey, respondents have to indicate whether they expect the business situation to become more favourable, remain the same or become less favourable over the next six months. The balance value is the difference in percentages between the more favourable and less favourable answers. It improved from minus 40.0 to minus 31.1, which is still a very poor value and shows: The German industrial economy is not out of the woods yet. A recession in the winter months and in spring is still the most likely forecast. But at least the latest ifo data give reason to hope that it will not be quite as deep as the majority of observers have expected so far.

A start has been made. If business expectations in industry continue to rise in the next two months, this would mean a turnaround in economic activity. The business cycle component in the private-wealth stock market indicator would then switch from "red" to "green" at the end of January.

However, this is not yet the case. The strategic corridor of the stock market indicator therefore currently remains at an equity quota of between 45 and 75 percent of the individually planned equity share.

Many readers have asked in recent weeks whether this is not too offensive in view of the obvious risks. A month ago we therefore pointed out that an even stronger reduction of the equity quota was also risky. First, the valuation of the DAX is below its long-term fair value. This is fundamentally favourable. And secondly, in an environment of maximum uncertainty, positive surprises can also occur at any time. In this case, we explained, prices would immediately rise significantly.

The fall in the inflation rate in the US, which raised hopes of an end to interest rate hikes by the US Federal Reserve in the first quarter of 2023, and the massive government support measures in Europe were such positive surprises. The subsequent positive reaction on the stock markets underlined that it is sensible for equity investors not to be positioned too defensively even in difficult times.

Within the corridor of 45 to 75 percent suggested by the stock market indicator, the results of the capital market seismograph decide on the exact positioning. The latter has been very cautious for quite some time. The probability of turbulent negative markets is dominant and advises further caution. For this reason, the specific share quota suggested by the stock market indicator is currently 50 percent of the individually planned share quota.

Half of the capital available for shares is therefore still parked in cash and is waiting to be re-entered. Even before a possible turnaround in the economic component, an improvement in the seismograph indicator could justify this. We are watching its development very closely and will keep you informed.