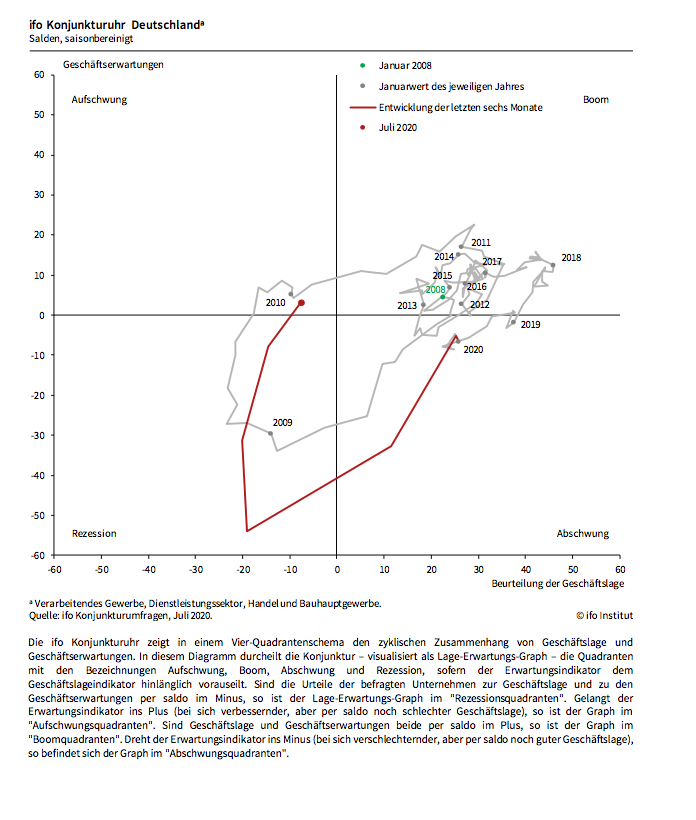 There's never been anything like this before. In just five months, Germany's economy has gone from near-boom to near-boom as a result of the downturn and recession and back into the upswing quadrant of the ifo business cycle clock (chart below). A cycle in fast motion. According to the diction of the Munich-based economic researchers, the recession has thus ended and a new upswing has been established.

This has consequences for the positioning of the private wealth stock market indicator.

As outlined in early April, the model uses zwei Indikatoren. Firstly, share purchases are interesting when the overall market is favourably valued. And they are risky when the market is highly valued. Second, equity investments are promising if the economy and thus corporate earnings are expected to improve. And they are less lucrative if the economy and earnings are expected to deteriorate.

The answer to the second question - how is the economy developing? - is provided by the monthly survey on the business climate conducted by the Munich-based ifo Institute. If business expectations in industry rose three times in a row after a previous downturn, the ifo Institute sees this as the beginning of a new long-term trend. This is exactly what has happened now. So the economic component of the stock market indicator is now giving the green light for equity investments again.

However, the valuation is not as favourable as it used to be at the beginning of an upswing. The glut of money from the central banks and the lack of alternatives in view of the prospect of zero interest rates for decades have ensured that the DAX is now trading above its fair value. This is derived by the editors from economic data and roughly reflects the expected long-term path of the stock market. Currently, this fair value is between 11000 and 12000 DAX points.

We use the results of the capital market seismograph for a more precise, short-term equity positioning within this range. Using a complex mathematical model that incorporates both economic variables and direct market indicators, the seismograph estimates the probability of three market conditions in the coming month. Here, "green" means that a calm market with a positive trend is expected. Investors can invest with peace of mind. "Yellow" indicates a turbulent market with positive expectations - investing is okay, but hedging is indicated. And "red" indicates a turbulent market with negative expectations. The advice is then: Do not invest.

The seismograph has been signalling an improvement in the situation on the stock markets since the beginning of April. Until then, the "red" probability had dominated, but since then "yellow" has gradually taken over. Since the end of April, the probability of a positively turbulent market (yellow) has clearly dominated events. "The probability for negative turbulence is now at the level of the pre-Corona period. This still justifies a clear overweighting of equities," explains Oliver Schlick, who regularly calculates the seismograph data.

The recommended equity weighting of the private wealth stock market indicator has been in the corridor between 30 and 70 percent for some time. Since the capital market seismograph is dominated by the probability of a positively turbulent market, 60 percent of the capital earmarked for equity investments should be invested since mid-April.

In recent weeks, we have pointed out that an increase in the corridor at the end of July would be advisable if business expectations continue to improve.

This is now the case. The recommended equity weighting of the private wealth stock market indicator is now in the corridor between 60 and 90 percent. Since the capital market seismograph continues to recommend an overweighting, but at the same time the valuation situation must be taken into account, 80 percent of the capital earmarked for equity investments should currently be invested.