The price of CO2 will rise - investors will benefit. 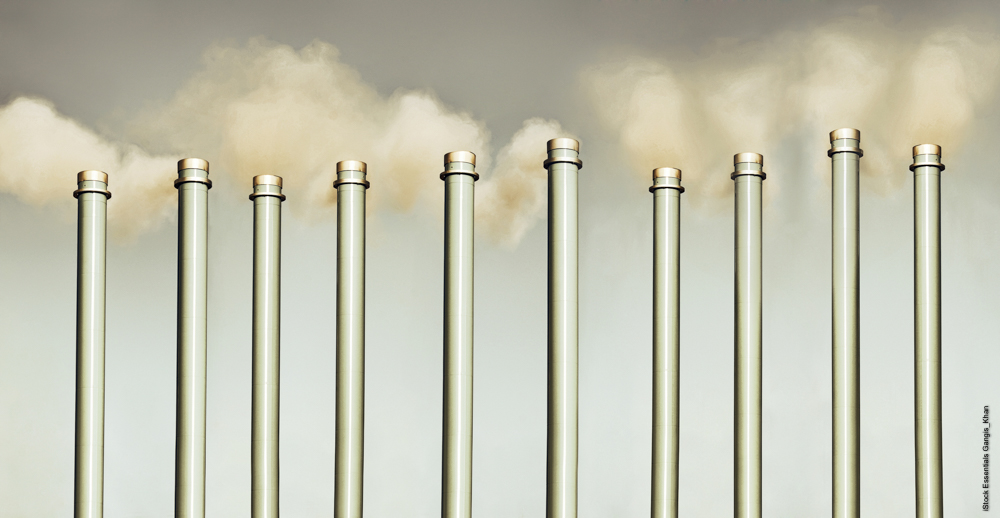 How much is nature worth? This question was asked by private wealth in the 01/19 issue, when analyst Lawson Steele of Berenberg Bank predicted that demand for pollution rights would significantly exceed supply in the future. And that therefore the price for a CO2 certificate would have to rise sharply. In recent months, however, the price of CO2 has fallen. This could be an opportunity for investors.

It is good news that the expansion of alternative energies is progressing. According to the analysis 'The European Power Sector in 2019' by Agora Energiewende and Sandbag, the share of renewable energy production in the electricity mix in the European Union (EU) rose last year by 1.8 percentage points to 34.6 percent. As a result, carbon dioxide emissions from the electricity sector fell - by 120 million tonnes according to initial estimates.

Less carbon dioxide emissions also means that industry needs fewer CO2 certificates. Since the EU emissions trading scheme is based on the fact that the companies covered have to buy one certificate for every tonne of CO2 emitted and there is only a limited number of new certificates per year, the drop in emissions is not good news for investors invested in CO2 certificates.

In addition, the brexite makes you insecure. Now that Britain has left the EU, there are fears that British companies will throw their rights onto the market. No wonder that the price for a CO2 certificate recently fell from 25.60 euros to just under 23 euros.

However, Berenberg analyst Lawson Steele considers it unlikely that such low prices will be permanent or that they will fall even further in the long term. On the contrary: More than ever, he is convinced that the price of CO2 will rise massively. And this statement, he said when asked, was not changed by the current CO2 savings of the EU electricity sector. Nevertheless there will be a massive deficit of certificates in the future.

Steele's most important argument: at a price of around 23 euros, there is little incentive for industrial companies to switch from coal to the lower-emission gas. In fact, he estimated that only about 29 percent of the potential for switching would be used in this price structure. But if there is no massive switch from coal to gas, the EU's emission reduction targets will not be met and the market for certificates will be in deficit. The demand massively exceeds the supply of certificates. This year alone, according to Steele, the industry will need additional certificates for the emission of 80 million tonnes if prices remain unchanged. In the next three years, he expects this deficit to rise to around 650 million tonnes. By 2030 it would be as much as 1,477 million tonnes.

This imbalance, according to Steele, will ultimately be resolved by higher prices for CO2 certificates. At some point, companies would eventually have to buy pollution rights to compensate for their higher emissions. If they fail to do so, a penalty of 108 euros per tonne emitted will be imposed for each missing certificate. In addition, the polluters must still purchase this non-existent certificate in the following year. This is likely to exert further upward pressure on prices.

If the price of CO2 certificates rises, the incentive to switch from coal to gas also increases. This again reduces the demand for pollution rights. If supply remains the same, a new equilibrium is achieved at significantly higher prices

Steele has outlined the path to this goal in his current study "Carbon: unshaken believe".

Only at a price of well over 35 euros per certificate is the financial incentive for a switch from coal to gas large enough, according to his calculations, to avoid the above-mentioned deficit this year. For 2021, where Steele is forecasting a deficit of 219 million certificates even if the potential for switching to gas is fully exploited, the analyst then expects an average price of around 65 euros. The CO2 price should remain in this range in 2022. Of course, all this only applies if industry can actually achieve CO2 savings in the meantime, in line with the goals of EU climate policy. If this does not happen, quotations far beyond the 65 euros are conceivable.

A short-term trigger for a price increase could, for example, be that the fear of sales of certificates from Great Britain is decreasing. After all, the British withdrawal from the EU emissions market would only affect net emissions rights amounting to 55 million tonnes of CO2. These, according to Steele, are likely to flow into the market only slowly and well distributed. If market participants realise that this will not create additional downward pressure on prices, this alone could lead to a price recovery.

One aspect that is not yet included in the prices is a possible change in the European Union's emission targets. Steele admits that this development has a probability of at least 50 percent. So far, emissions of climate gases were to be reduced by 40 percent by 2030 compared to 1990. In view of the climate debate, this reduction target could now be increased to 50 to 55 percent. This would probably be accompanied by a greater reduction in the free allocation of pollution rights by 15 percent instead of ten percent next year. CO2 certificates would become correspondingly scarcer - and more expensive.

How to invest in CO2 certificates

If Lawson Steele is right, the price for a CO2 pollution right is likely to rise significantly from the current level of just under 23 euros. Investors can benefit from this in a number of ways:

The closer this strike price is to the current price of the emission right, the greater the leverage of the paper and the riskier the investment. In order not to be knocked out by even brief movements in the CO2 price, it is advisable to choose papers with the largest possible gap.

More information on this topic can be found at www.private-wealth.de (issue 04/17, The environment is becoming more valuable; issue 01/2019, Hot phase).