Europe and the Causa Italia. 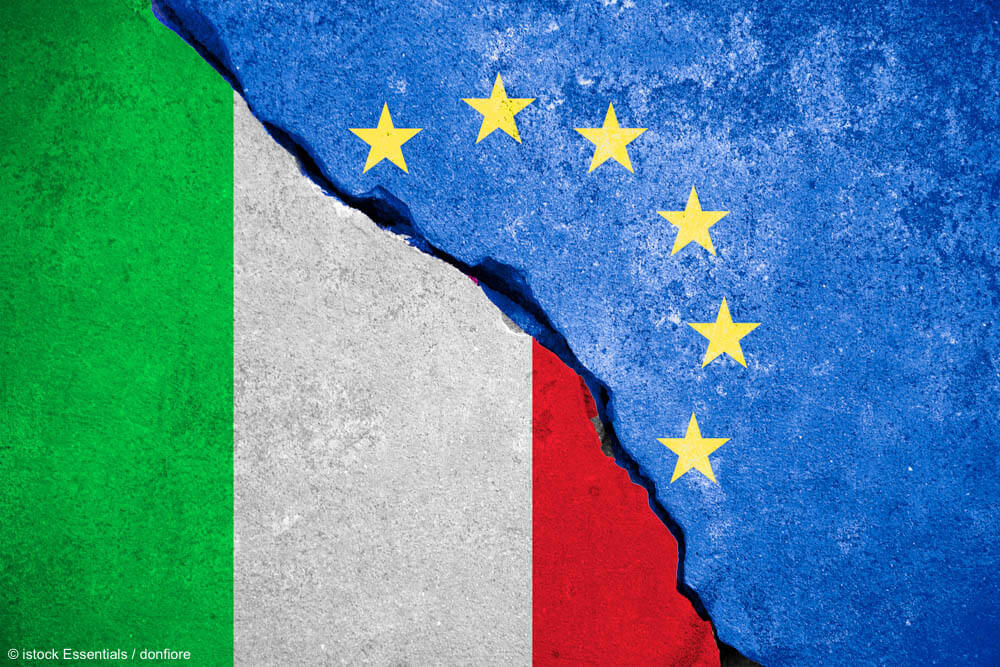 "The time of ultra-expansive monetary policy is going on worldwide at zu Ende", states Timo Schwietering, Head of Capital Market Analysis at Metzler Private Banking: "Investors are well advised to analyse early on what a return to in Richtung means normality".

In fact, the US central bank has begun to cautiously reduce the stock of bonds in its balance sheet. Further increases in key interest rates have been announced there. The Bank of Canada recently hiked interest rates. In November, the Bank of England raised the key interest rate for the first time in ten years. And even in the euro zone a turnaround in monetary policy can be observed. Die The European Central Bank (ECB) announced that it will halve the volume of its monthly bond purchases.

The yields on long-dated bonds in many industrialised countries have so far hardly responded to these developments. However, it is probably only a matter of time before corresponding changes are also seen there.

In the euro area such a movement should become more visible slowly than in other regions, as the exit speed of the ECB is slow. "Nevertheless, investors should ask themselves today what a potential rise in interest rates means," says Schwietering. "This is particularly important in view of an economy that is already for some the new problem child of the euro zone: Italy.

It's no secret: there are plenty of structural problems in Italy. The state is highly indebted, the banks groan under a particularly high number of non-performing loans, the labour market is regarded as encrusted, the judiciary is sluggish, and in terms of corruption, the situation in Italy is similar to that in the African island state of São Tomé or Cuba.

The large number of problems is having a noticeable impact on the economy. In fact, the Italian economy is even worse off today than it was at the turn of the millennium: The third largest country in the euro zone has suffered losses in prosperity of around two percent since the introduction of the common currency. Even crisis-ridden Greece has fared somewhat better in this respect.

Of course, such a bad development does not remain hidden from the population. "It is therefore not surprising that the euro is not particularly popular in Italy," explains the expert. When asked whether the common currency is perceived as a good thing for the home country, only 41 percent of the Italians surveyed answered "yes" according to a survey by the EU Commission. In all other euro countries, with the exception of Cyprus, approval rates are higher.

"This combination of a relatively dissatisfied population and a large number of structural problems does not exactly give cause for optimism with regard to Italy's growth prospects and signals an urgent need for political action". However, despite the currently favourable starting position with decent global economic growth and supportive monetary policy, it is still a long time before any sweeping reforms are implemented.

According to Schwietering, one of the main reasons for the reform standstill is likely to be the traditionally high level of political instability. Since the end of the Second World War there have been 65 different government constellations in Italy. In a period of 72 years, the government changed every 1.1 years. The next parliamentary elections in Italy will take place in spring 2018. "The ballot could then certainly lead to political upheavals in the boot state. For similar to France, there are populist parties here too that want to take advantage of the mood in the country and repeatedly strike a critical note of the euro."

This applies first and foremost to the "MoVimento 5 Stelle" (M5S) movement of comedian Beppe Grillo, which is now running a neck-and-neck race with the social democratic governing party "Partito Democratico" in the election polls.

"However, whoever wins the final election will then be dependent on an ally." The 5-star movement seems not to be able to form a coalition - so far at least it has categorically rejected cooperation with the "establishment". A theoretically possible alliance partner would be the regionalist Lega Nord, which shares with M5S above all the critical attitude towards the European Union.

On many other issues, however, both parties have opposing positions, which makes it more than questionable at this stage whether these overlaps could be sufficient as a basis for coalition. In addition, the 5-star movement has already struck a much more moderate tone in its rhetoric towards the European Union in recent weeks and months. "Last but not least, such an alliance would presumably depend on a third coalition partner - the Fratelli d'Italia (FdI), for example - to achieve an absolute majority.

Other conceivable coalitions seem similarly scarce, for example between the current governing party Partito Democratico, Berlusconi's Forza Italia and the leftist MDP. Given this unclear majority situation, the outcome of the elections in Italy is currently highly uncertain.

However, it is clearly foreseeable that it will be difficult for most of the possible alliance constellations to achieve more than 50 percent of the votes. "Thus the future government will have probably hardly the necessary parliamentary penetration strength, in order to bring large changes on the way , meint Schwietering.

Italy is thus leaving a favourable window of opportunity for structural reforms unused. In recent years the country, like many other euro states, has benefited massively from the European Central Bank's ultra-loose monetary policy. The average interest rate on Italy's outstanding national debt has fallen from around 4.2 per cent in 2012 to 2.9 per cent this year.

In this environment, most euro countries were able to reduce public debt relative to economic output or prevent a further increase. "The situation is quite different in Italy, where government debt has risen further in recent years - despite or precisely because of the fall in interest rates," criticises the investment strategist. Meanwhile, the debt burden amounts to more than 130 percent of the gross domestic product. "As long as interest rates continue to fall or at least remain low, the high level of debt appears to be sustainable for the Italian budget. But what will happen if interest rates gradually rise again?" 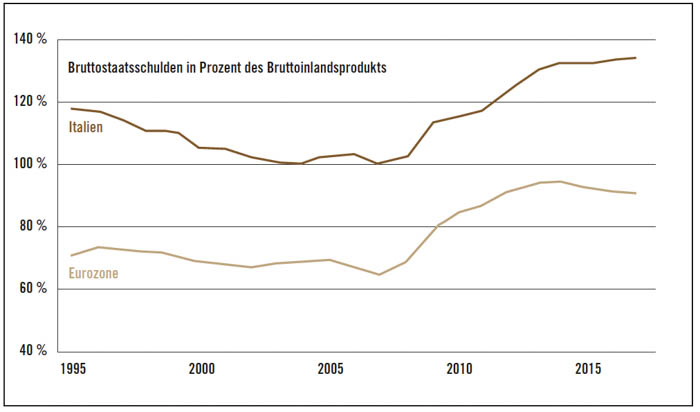 During the sovereign debt crisis, interest expenditure by some eurozone countries temporarily exceeded ten percent of their respective government revenues - in Greece, Ireland, Portugal and Italy, for example. As a result, a massive flight of capital set in, and the sustainability of public finances in the "peripheral countries" was increasingly questioned. "An interest burden of more than ten percent of government revenues was therefore obviously no longer considered sustainable by many market participants", erklärt Timo Schwietering.

Fortunately, since the peak of the crisis in 2012, the ratio of interest expenses to income has fallen again in all euro countries. Even in Italy, the interest expenditure ratio currently stands at "only" 8.3 percent. "However, it can be calculated that the average interest rate on Italy's total outstanding public debt would only have to rise by 60 basis points from its level of 2.9 percent to reach the 'critical mark' of 10 percent of public revenues," Schwietering explains. 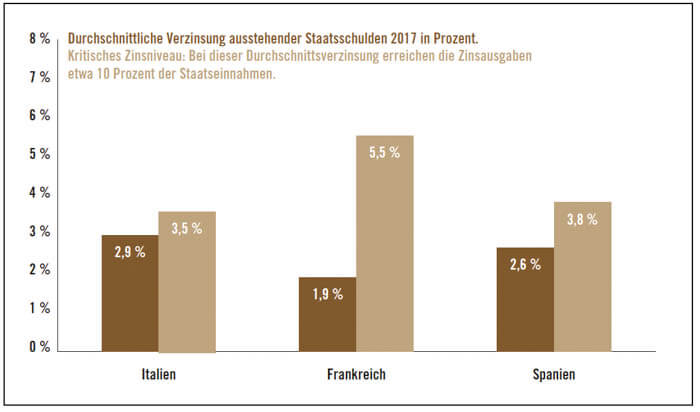 Other countries, such as France and Spain, can cope with significantly higher interest rate increases of 360 and 120 basis points respectively. It should be noted, however, that this rise in interest rates does not refer to the yield level currently observed on the bond market, but to the average interest rate of all bonds, which still includes many high-interest old issues. Since the current yield level in all countries is below this average interest rate, the situation is not quite as risky as it may seem at first glance.

Nevertheless, Italy would do well to make good use of the time remaining and to introduce growth-enhancing reforms. "If nothing is done, the numerous structural problems of the Italian economy should, at the latest in the next major recession, lead to further potential conflict within the international community," Timo Schwietering is convinced and concludes: "Sooner or later the fate of the European monetary community could be decided at the Causa Italia.