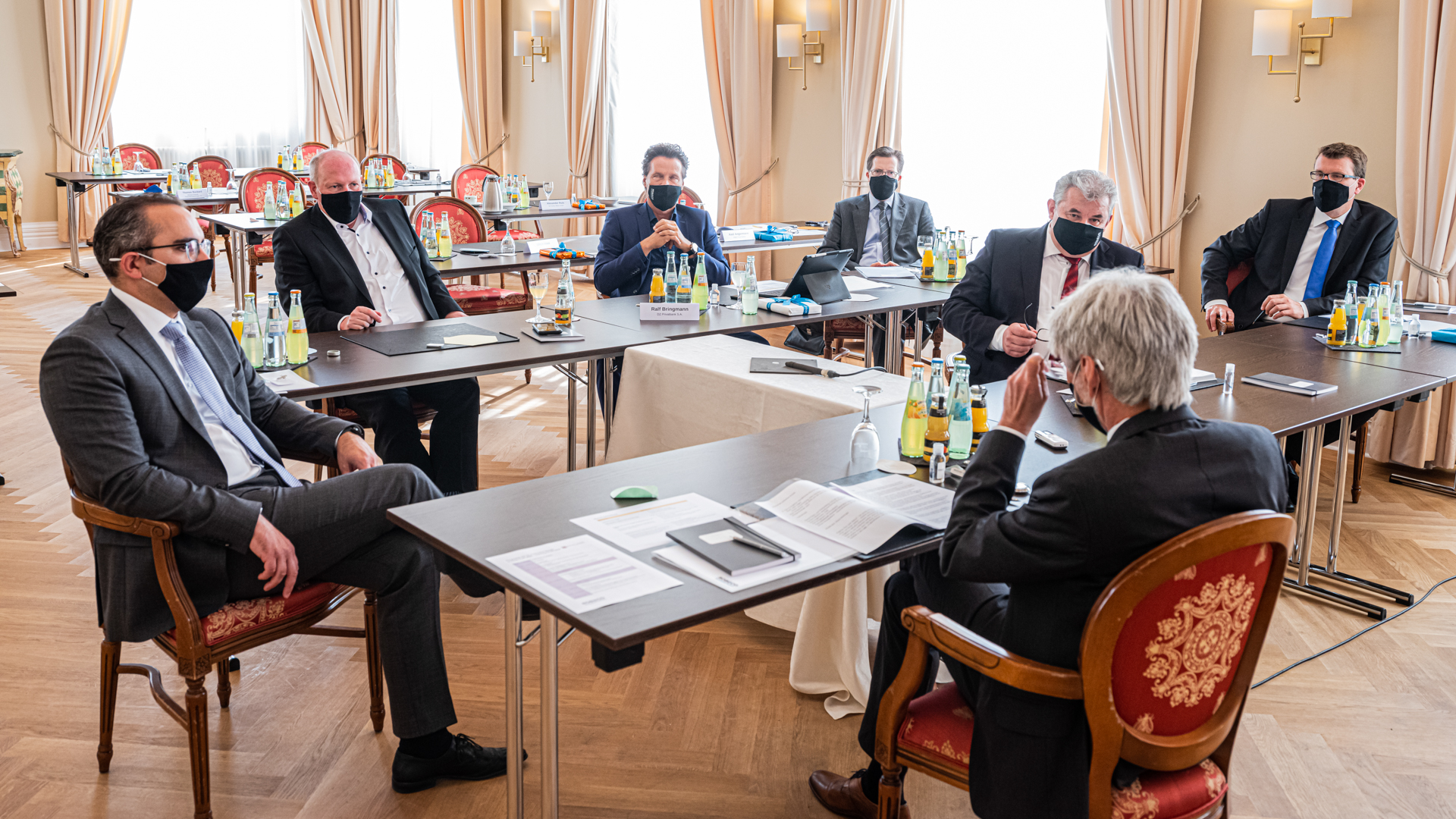 Economic policy. Fiscal and monetary policy are increasingly converging. Is this a curse? Or a blessing? And what does it mean for the future of the economy, the prospects for growth and the outlook in the various asset classes?

In the social sciences there is the concept of path dependency. It roughly describes the typical course of processes. In the beginning the future is open, there are many possible branches. Alternatives are available at countless intersections. A small influence can have great effects and change the direction of the process.

At some point, however, there comes the point where the path seems to be fixed. A change of direction is now hardly possible, deliberate turning is extremely complex and expensive. That is why we stick to this path, even if it turns out later that an alternative would have been superior. Path-dependent processes, the scientists say, are not self-correcting, but rather solidify.

"This is exactly what is happening at present in the interaction between monetary and fiscal policy," nods Ralf Bringmann, DZ Privatbank, "the central banks have always been considered independent. Since the financial crisis of 2008, however, monetary and fiscal policy have become increasingly intertwined. "In the meantime, the independence of monetary policy can be confidently questioned. For today all industrialized countries are dependent on their central banks buying up a large part of the bonds they issue", verdeutlicht Carsten Mumm, Donner &  Reuschel. "In the spring, for example, the ECB bought bonds for 1.35 trillion euros," informs Johann Roßgoderer, MFI Asset Management, "it is no coincidence that this was almost exactly the same amount that the individual countries took up on the market. The central bank thus prevented this gigantic volume from leading to massively rising yields. Denn higher interest rates the countries can no longer afford."

A little digression. In After the Second World War, the national debt of the developed countries in relation to the national product had reached its highest point so far at just under 125 percent. Then, thanks to the tailwind hoher Wachstumsraten beim Wiederaufbau a 30-year debt relief phase began. Die Ratio fell to 25 percent. Seitdem it rises again. Zunächst to 75 percent. Then to 100 percent when the economy had to be supported with state money during the financial crisis. And now - due to the rescue measures in the context of the Covid pandemic - even to more than 125 percent. That is a new record level. Aktuell the industrialized countries are more heavily indebted than at the end of Zweiten Weltkriegs.

"And the demands on national budgets will continue to rise", ist Timo Steinbusch, Deutsche Apotheker- und Ärztebank, überzeugt. "The Corona aid measures will swallow up further billions in the nächsten Monaten. Added to this is the challenge of restructuring the economy in Richtung Digitalisierung and climate neutrality. And in a few years' time, the old-age provision systems will run into difficulties due to demographics", Daniel Oyen, VPC Family Office, enumerates, "all this will cost a lot of money".

"We are already living in a crazy new world," shakes Axel Angermann, FERI, the head, "the more debt we run up, the clearer it is that interest rates must not be allowed to rise at all. Und the only ones who can ensure this are the central banks."

In the meantime, the inevitably close connection between monetary and fiscal policy has even been officially anchored in the "Modern Monetary Theory", which is being seriously discussed by parts of the Democratic Left in America. "The core of this theory is that the central banks transfer to the states everything they need to service their expenditures," explains Mumm and concludes:  "Neither the FED nor the ECB will be able to get out of bond purchases in the foreseeable future." "And that's not all," Bringmann predicts: "In Japan, the world's most heavily indebted industrialized country, the central bank has been officially controlling the yield curve for some time now and is completely suspending the bond market. This could be the blueprint for the US and Europe."

In fact, it would be the ultimate solution to all economic problems. Nobody would have to worry more about how viel Schulden can afford ein Land. Und the state would have a tool in its hands to stimulate demand and thus growth at will.

Welcome to paradise. "Or in hell", überlegt Johann Roßgoderer, "a fiscal policy without budget restrictions can also become incendiary. A politician who wants to be re-elected will never be able to turn down wishes that are put to him in such a world." Is that a curse? Is it a blessing?

"First of all, the answer depends on what happens to the capital", analysiert Ralf Bringmann, "there has actually been a long lack of investment to initiate the urgently needed change processes. That would be good debt." "On the other hand, it would be bad if the money were to flow into consumption", ergänzt Timo Steinbusch.

Currently, the professionals see quite positive approaches in this respect: "In the USA, trillions will now flow into the infrastructure. And in our country too, the economic billions include items that would have been unthinkable a year ago - for example, 50 billion for hydrogen technology. In this way, structural change can be pushed forward and new growth dynamics generated," Angermann hopes.

"The EU's 750 billion programme is also going in the right direction," adds Mumm, "Growth alone cannot be the goal. The focus must be on qualitative improvements, on the more efficient use of resources and the reduction of negative environmental impacts. In other words, compatible, or in other words, sustainable: "good" growth.

"The optimistic scenario would then look like this," Oyen outlines: "Productivity is accelerating due to digitization. New fields of growth are opening up. We are getting an economic boost. And it helps to pay off the debt in relation to the rapidly increasing national product.

Experts think it is conceivable. But is it likely? "It can only work as long as the inflation rate remains under control", sagt Mumm. "Otherwise the central banks would have to decide at some point - let inflation run and thus ruin the economy, or raise interest rates and risk a financial crisis - neither of which are very promising prospects," Roßgoderer makes clear.

Mit Blick to the year 2021, this is not yet an issue. "In the current economic crisis there is no room for wage and price increases", sagt Steinbusch. In the longer term, however, this could change. "90 years ago, in the Golden Twenties, there was also a great relief in society after the World War and the surviving of the Spanish flu. People celebrated and consumed. I could well imagine that when Corona is defeated in a year or two, this will happen again," says Oyen.

"In addition to the catch-up effects on consumption and investment, fiscal policy will remain expansionary for a long time to come. If globalisation slows down and there is a lack of capacity, this could well lead to a rise in inflation in certain areas of the economy," stimmt Angermann zu.

"As long as this remains in the range between two and four percent, it wouldn't be bad at all," says Bringmann, "nominal growth will then be higher, debt relief will work even better. The majority of economists also see no reason why the inflation rate should rise more strongly. Digitalization and demographics - an aging population spends less - argue against it.

Obviously, monetary policy makers are already preparing for this scenario. "The US Federal Reserve has just changed its rules of the game", erklärt Mumm, "it now only wants to achieve its inflation target of two percent on average. De facto, it could allow three percent inflation over the next five years to make up for the shortfall of the last few years. "This simply reflects the needs. If a central bank does not want to jeopardize its own system by increasing interest rates, it needs room for maneuver," says Roßgoderer. "I am sure that the ECB will soon take a similar step and make its 2003 strategy more flexible", ergänzt Bringmann.

The world of the future, as the experts see it, is characterised by greater tolerance for more debt and higher inflation rates. And because the central banks will not allow higher interest rates, they are likely to remain extremely low for a very long time. Is this a curse for investors? Or a blessing?

"It depends. For all those who own nominal values - cash, Anleihen, Lebensversicherungen - it is clearly a curse. Because the real interest rates - i.e. the interest rate minus the inflation rate - will remain negative or even more negative. And the financial repression, the loss of purchasing power of nominal values, will intensify", erklärt Timo Steinbusch.

"For owners of tangible assets - especially shares - it could prove to be a blessing on the other hand, once we have the Corona pandemic under control," Axel Angermann continues. Liquidity remains abundant, fiscal policy is fanning a flash in the pan in the short term, and corporate earnings are rising. In the zero interest rate era, future profits become more valuable and share valuations increase. When more and more private investors and insurers now realize this, they change their investment policy. And their demand will continue to drive prices. "These are classic conditions for a phase of massive exaggerations," Roßgoderer states, "but it will be accompanied by extreme price fluctuations. Because groups of investors come to the market who actually do not want to accept the share risk. It will be exciting."

At some point, however, the bill will come due. "Because not everyone owns material assets, the gap between rich and poor is even wider," muses Carsten Mumm. "That is why the state will then take corrective action. Should there be massive tax increases, this would of course be negative in perspective", macht Oyen clear.

But he sees the greatest risk in the fact that everyone is once again mistaken about inflation. "After the financial crisis, everyone thought that prices would have to rise in view of the expansive monetary policy. That was wrong," Oyen recalls, "but if monetary policy now directly finances an ever-increasing volume of government spending, that's a different game. Meine The concern is that at some point we will no longer be talking about the feel-good scenario of two to four percent."

Then the question of dem Vertrauen would actually come up in our monetary system. "The last time paper money was thrown on the market in a similar way was in 18th century France. The consequence was the disruption of the currency," Roßgoderer recalls.

It need not happen again. "But if it did, material assets would not provide perfect protection. Sie would probably lose much less than nominal values," Steinbusch points out. "Being broadly based in this area is then the only sensible solution," concludes Oyen.

It is important for investors to start on this path now. The (in)sacred alliance between monetary and fiscal policy has been forged, the path set for a long period of extremely low interest rates and negative real interest rates. "So it is clear where the journey is headed in the long run. We recommend using every correction to further increase the share of tangible assets im Vermögen," concludes Axel Angermann. ®

How to invest it Gerd Hübner 168
Blockchain. The digital representation of…

How to invest it Threadneedle Management Luxembourg S.A. 169
Small Caps. Shares of smaller companies, they…

How to earn it Mariella Bauer 158
Handmade. Instead of rapid growth, the Munich…

How to earn it Yvonne Döbler 150
Expansion strategy. In 18 years, Wolfgang Trier,…