The climate is getting frosty. 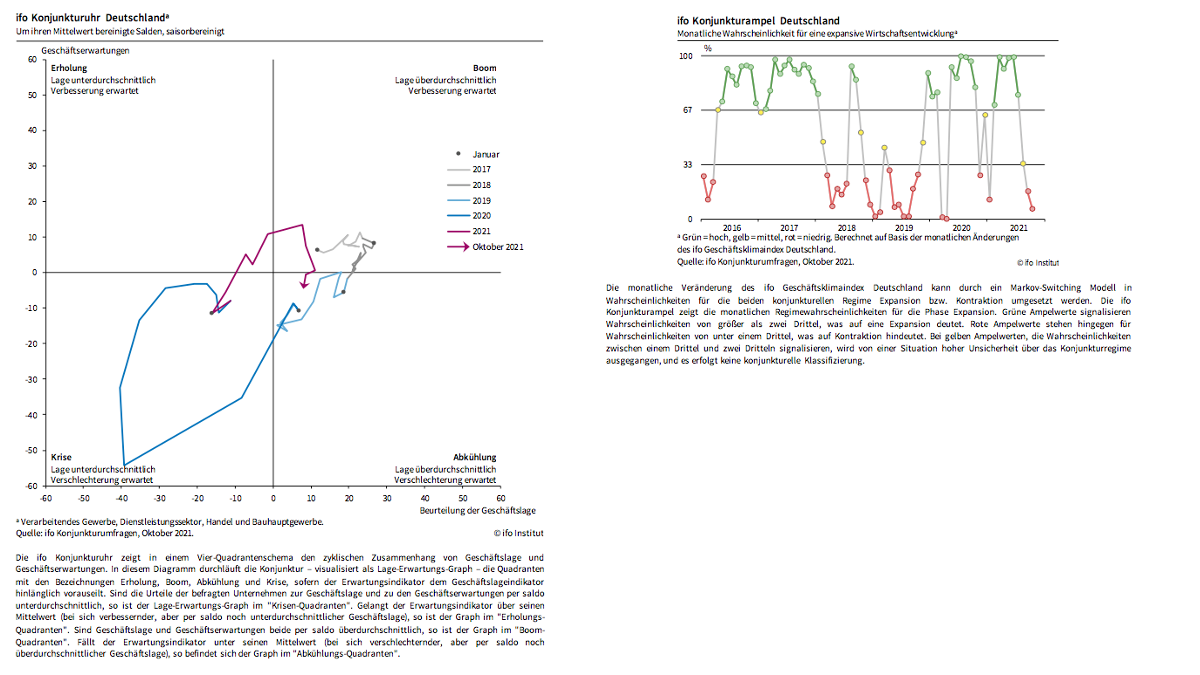 Our indicators suggest that there will be greater fluctuations on the stock markets in the coming weeks. This is why the private-wealth stock market indicator already reduced its suggested equity allocation three months ago.

The current data from German industry support this decision.

This does not look good. The ifo Business Cycle Clock (Chart 1) now places the German economy in the cooling quadrant. And the ifo economic traffic light (Chart 2), which turned around last month, is now at "deep red". In plain language: the ifo Institute now rates the probability of a cyclical phase of expansion at below ten percent. Supply problems are causing problems for companies, capacity utilization in industry is falling. According to the Munich-based economic researchers, sand in the gears of the German economy is now hampering the recovery.

We have already described the associated risk for equity investors in recent months. The fact that companies are unable to work off their orders is reducing sales. If, in addition, they are unable to pass on the higher input costs to sales prices, profit margins will also suffer. The result would be a significant revision of previous profit expectations.

There is a simple reason why the stock market is not reacting negatively to this. Market participants are looking past the expected trough. They are convinced that most of the production losses will be made up. Production, sales and profits would then be higher again later on.

This positive view of things is also reflected by the capital market seismograph. "The market obviously believes in the temporary nature of the supply bottlenecks," analyses Oliver Schlick, Managing Director of Secaro GmbH, who regularly calculates the seismograph and links it to investment recommendations. Therefore, the probability for a calm positive market development (green) and a positive turbulent market (yellow) remains cumulatively at more than 98 percent. So the probability of a turbulent negative market (Red) still doesn't matter. "The seismograph infers a positive environment," Schlick informs.

But the longer supply chain problems persist, the more challenging the stock market environment is likely to become. Expectations for corporate earnings in the fourth quarter of 2021 are still very high. Disappointments - as the current reporting season shows - are punished with drastic share price losses.

An interesting aspect on the side: when the ifo economic traffic light switched back to red in March 2018, as it has today, after a long period of green, this was followed by a prolonged period of "trendless volatility" in the DAX. Specifically, prices fluctuated wildly in a corridor of minus ten and plus ten percent. It is quite possible that we will see a similar scenario in the coming weeks.

The private-wealth stock market indicator combines an analysis of the long-term fair value of the DAX with an economic component derived from the ifo climate and the tactical positioning of the capital market seismograph. In concrete terms, this means that the negative economic component had already lowered the equity allocation three months ago into the corridor between 45 and 75 percent of the capital earmarked for equities. The very positive assessment of the seismograph ensures that the stock market indicator suggests an allocation at the upper end of the corridor at 75 percent.

After more than a year of overweighting equities, the private-wealth stock market indicator had taken its foot off the gas three months ago. That remains the case this month. The shaky economic situation increases the likelihood of a turbulent end to the year. We'd like to keep some powder dry for that eventuality.