The first step out of the economic slump. 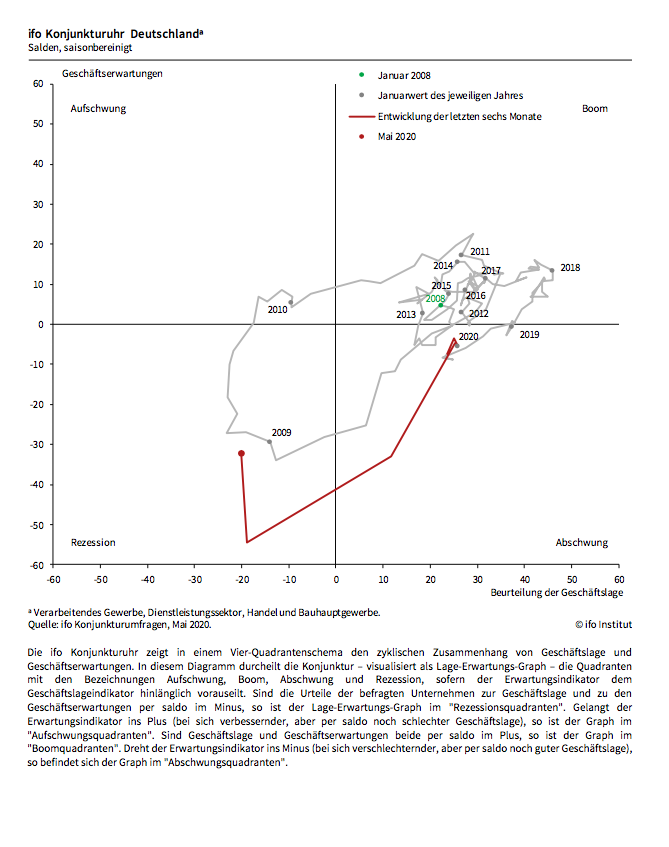 the mood among German companies has recovered somewhat after the catastrophic previous months. The ifo business climate index rose again in May. Although companies assessed the current situation as even worse than in April, expectations for the coming six months have improved. However, this was not to be expected any differently in view of the questions on the ifo Business Climate.

In May, the business situation had reached a new low in response to the lockdowns. In view of the expected initial easing measures, there was only one logical answer to this: expectations for the next six months had to be more favourable again. It took a great deal of pessimism to believe that the situation would change in six! six months from now, the situation would be even worse.

Thus, the ifo business cycle clock still shows a more pessimistic picture than at the low point of the financial crisis (chart). But still - every recovery begins with a first step. According to the diction of the ifo Institute, a three-fold improvement in business expectations in a row would signal a turnaround in the economy. This can be the case at the end of July at the earliest. In view of the incalculable economic second-round effects of the pandemic, it will be necessary to wait until then before the all-clear can be given for the economy

Sentiment indicators, which now ask whether the economic situation will be more favourable, stable or less favourable in six months, give an overly optimistic picture of the economy. For the private-wealth stock market indicator, this means that the recommended stock weighting, derived from the ifo indicator and a fair value calculation, remains in the corridor between 30 and 70 percent. An increase would be indicated at the end of July at the earliest, if business expectations continue to improve in the next two months.

Since the capital market seismograph is dominated by the probability of a positively turbulent market, 60 percent of the capital earmarked for equity investments should be invested. 40 per cent will remain in cash as liquidity in order to be prepared for possible setbacks.

Note: Despite careful selection of the sources, no liability can be assumed for the correctness of the content. The information provided in private wealth is for information purposes only and does not constitute an invitation to buy or sell securities.