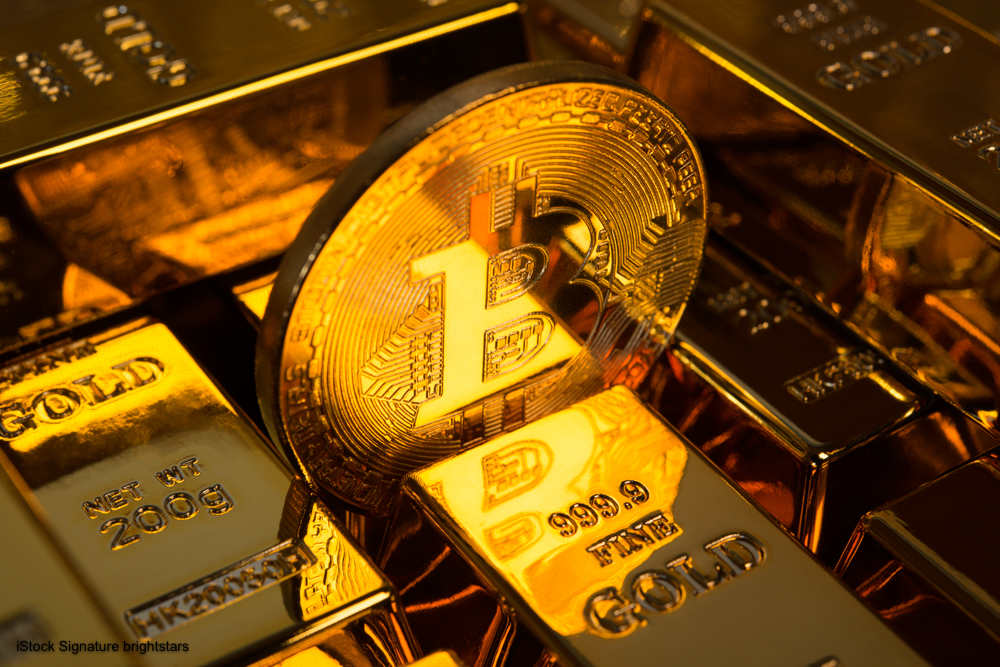 In times of monetary policy experiments, there is growing interest in "hard" investments, the supply of which cannot be expanded at will and which therefore serve particularly well as a store of value. Today, the most widely used classic alternative to paper currencies is gold. Manuel Andersch, Senior Currency Analyst of the Bayrische Landesbank, calculates in his study "Megatrend Digitalization - will Bitcoin Gold outpace Gold" that Bitcoin will soon be "harder" than gold. The possible conclusions from this work are breathtaking.

"In commodity analysis, we have always thought about how to grasp the quality of a monetary good, in other words, what makes an asset "hard". The so-called stock to flow ratio has proven to be a useful criterion. This can also be used to analyze Bitcoin", explains Manuel Andersch, Senior Currency Analyst at Bayrische Landesbank.

When calculating the ratio, it is not the limited stock of an asset that plays the dominant role, but the relationship between stock and current "production". In absolute terms, palladium, for example, is much smaller than gold - it accounts for only about five percent of gold holdings. But this would not make palladium a harder asset, as the new supply of palladium (flow) is not only relatively high, but in case of a price increase it can be easily expanded and dilutes the stock. "Many precious metals such as palladium, which are mainly used as industrial metals, therefore have a low stock to flow ratio," explains Andersch. 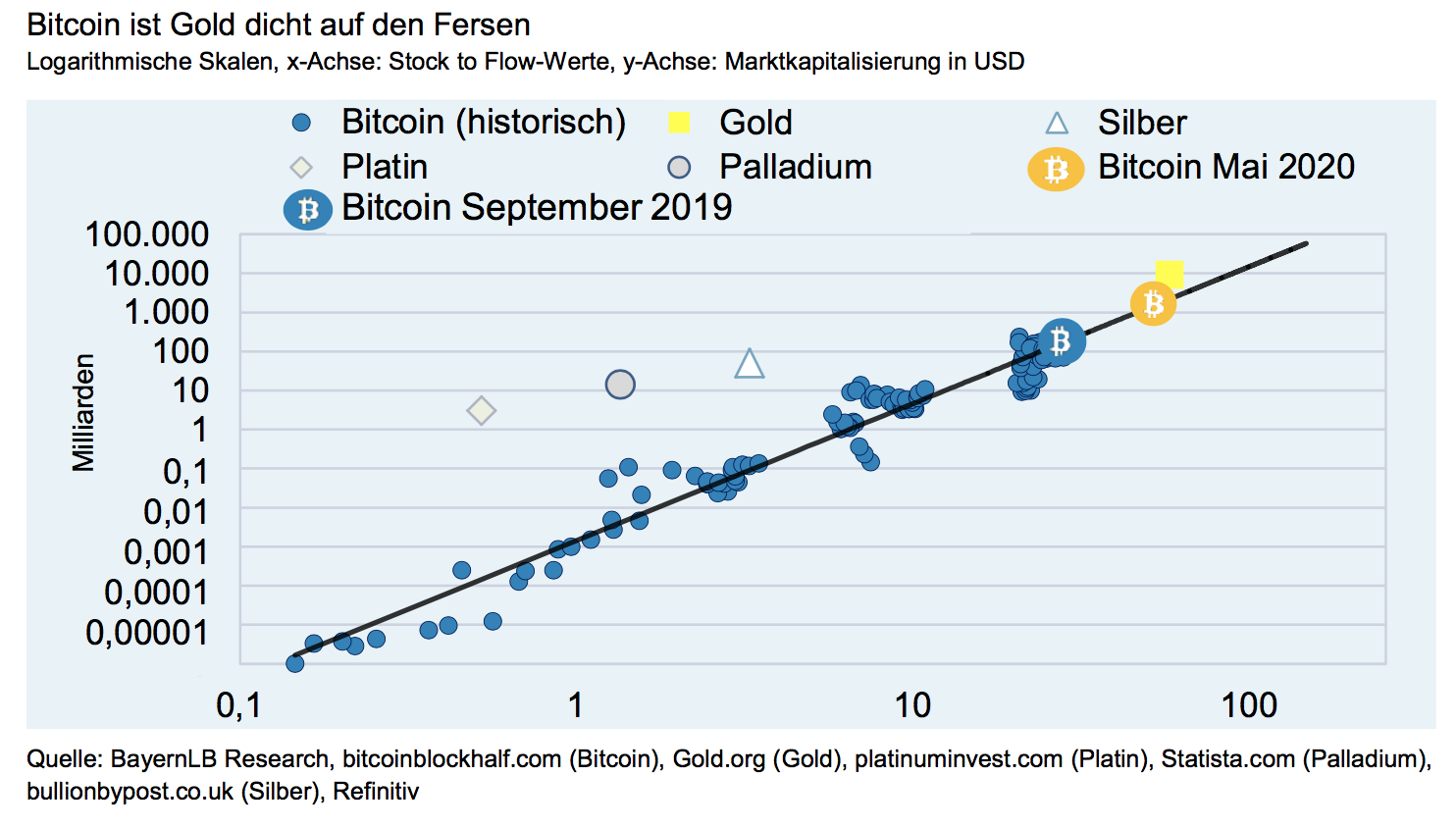 Instead, the attractiveness of gold lies in the fact that its supply cannot be expanded at will. In addition the limited annual growth (flow) of new gold meets an already very large stock (stock). Consequently, gold has a high stock to flow ratio. "Gold has had to 'work hard' for this status for thousands of years. Only due to the high production costs, a lot of time and the low industrial use a high stock was slowly built up. Bitcoin is now repeating precisely this development in fast motion, so to speak," explains Andersch.

What is fascinating about the Bitcoin experiment is that the maximum "money supply" was limited to just under 21 million Bitcoins. As a result, monetary growth also declines sharply at regular intervals. According to Andersch, 12.5 new Bitcoins are currently issued on average every 10 minutes. With the so-called "halving", the number of Bitcoins issued every 10 minutes will be halved to 6.25 in mid-May 2020.

Due to this "supply engineering" Bitcoin should be able to achieve a similarly high stock to flow value as gold next year - within only 11 years. This service profile is guaranteed by a global peer-to-peer network. To get this entire network to adopt a new service profile (i.e. software protocol), Andersch believes, is virtually impossible. "A more inflationary profile would be contrary to the interests of the network members. This would dilute the value of their Bitcoin. “

It is now particularly interesting that these considerations seem to allow conclusions to be drawn about the market value of Bitcoin. In a statistical model, Andersch compares the market value of all Bitcoins at certain points in time with the respective stock to flow data. A linear regression of the (logarithmic) data then provides a clear correlation ( graph below): "Bitcoin's market value increases linearly with increasing stock to flow value. The higher the hardness of Bitcoin, the more value is attributed to it. The (blue) points close to the regression line show that there is a very close correlation," explains Andersch

In order to check the plausibility of the estimated results, the analyst also entered the market capitalisations and stock to flow ratios of gold, silver, platinum and palladium in the chart. "It is striking that platinum, palladium and silver are all well above the regression line. This suggests that their market values are mainly based on their use as industrial metals. Gold, on the other hand, is quite close to the regression line, which is only logical. Here, demand as a store of value is the decisive factor."

The current model value of the Bitcoin is therefore 7500 US dollars. In May 2020, however, Bitcoin's stock to flow value will increase drastically after the next halving from currently around 25.8 to almost 53. It is then very close to the stock to flow value of gold - currently around 58th If the market value were to adjust accordingly, the model calculates a dizzying price of around 90000 US dollars per Bitcoin.

Is that realistic? And - why is Bitcoin only quoted at around 9000 US dollars when everyone knows that the halving will take place in May?

"As a forecaster, you know only too well that even the best statistical model can fail miserably in predicting the future," says Andersch, dampening expectations that are too high. "The big test for the stock flow model is certainly next year's halving. Then we'll see how the market reacts." The fact that there has not yet been a significant price increase is not surprising to the experts. "The price of the last two halvings (2012 and 2016) also rose only with a significant time lag. Apparently the complexity of the information is so extensive - after all, basics from computer science, network theory, cryptography, physics, economics, game theory and statistics are necessary - that it is not processed by a sufficient number of market participants. In a way, the market doesn't give any premature praise."

One thing, however, makes Andersch's analysis clear in any case. It would be negligent to ignore the Bitcoin as a potential store of value. Because Bitcoin was designed as ultra-hard money. "In 2024, when another halving is due, the degree of hardness will mercilessly increase further to a level above 100, the highest in human history," Manuel Andersch explains. Nobody really knows today what effects such a monetary standard would have. "The fact is that historically, the commodity with the highest stock to flow ratio has always been used as a store of value, and if Bitcoin is to become the money of the 21st century, it is because its properties (especially its high degree of hardness) are preferred to those of alternative forms of money.

The complete analysis can be found at: https://www.bayernlb.de/internet/media/ir/downloads_1/bayernlb_research/megatrend_publikationen/megatrend_bitcoins2f_20190930.pdf