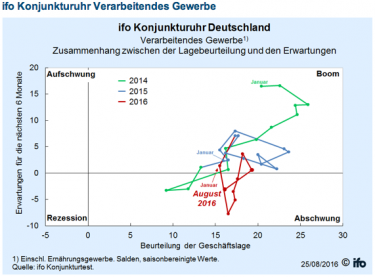 The Munich-based ifo Institute presented the August results of its survey on the business climate and business expectations. According to the report, the mood in the German economy has deteriorated noticeably recently. The important expectation component in the manufacturing industry has even fallen below its long-term average.

This puts the industry back in the downturn quadrant of the ifo watch. The ifo traffic light is now also "red" again (graphics below).

Obviously, German industry is currently moving on a very narrow scale between fear of recession and the hope of a further upswing. Fears are fuelled by a comparatively weak international economic environment, which has led to declining export expectations since the beginning of the year. 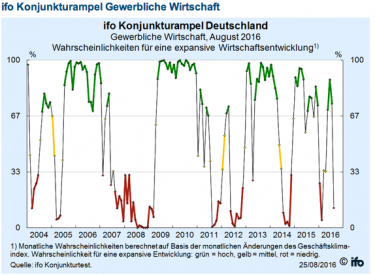 Hopes are linked to the still very expansionary monetary policy. It ensures that the business climate in the construction industry remains at an absolute record level. The construction boom is (still) supporting the German economy;

It is irritating that the direction of the economic signals of the ifo indicator has changed unusually quickly recently. As a reminder, in February 2016 the ifo index pointed to a significant downturn. In May, the leading indicator then provided an upswing signal again. And in September there could be another downturn signal - if the expectations in the industry then fall for the third time in a row;

In May, the positive economic development had led to the abandonment of the previously extremely defensive investment policy in the private wealth exchange model. The model raised the equity quota from 30 percent to 60 percent.

A further reduction in the proportion of equities would only be indicated in the event of a turnaround in the economy after three consecutive falls in ifo business expectations.

At the moment, therefore, there is no need for action. But the situation is getting worse.