Fulminant recovery in the Ifo climate. 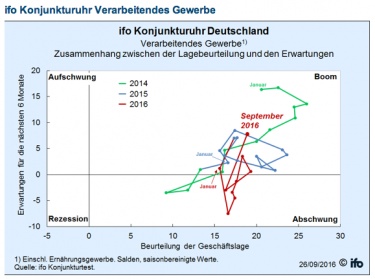 A month ago there was still reason to fear that the German economy would fall into a downturn scenario in the autumn. The current results of the Ifo business climate index have impressively wiped this fear aside.

The mood in the German economy improved massively again in September after the ifo indicator fell twice. According to the ifo Institute, a similarly strong increase in the important expectation component in the manufacturing industry was recently observed shortly after the financial and economic crisis. The comeback of export expectations, which rose noticeably in all important branches of industry, is particularly impressive. The Brexit shock seems to have digested. 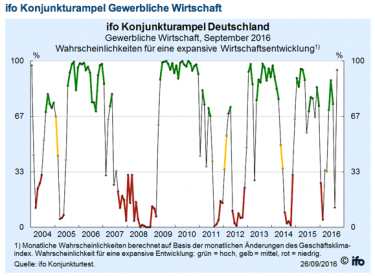 After a brief drift into the downturn quadrant of the ifo economic clock, the industry is now back in the boom zone. The ifo traffic light has also returned to "green".

The ifo Institute's economic indicator - actually a rather long-term barometer of sentiment - thus continues to fluctuate wildly back and forth. All alone this year there were four changes of direction. This is extremely unusual.

In May, the positive economic development had led to the abandonment of the previously extremely defensive investment policy in the private wealth exchange model. The model raised the equity quota from 30 percent to 60 percent at that time. An even higher equity ratio is prevented in the model by the valuation of German equities, which has meanwhile reached a very high level. Now that the trend reversal in the economy has failed to materialise, there is no need for action.