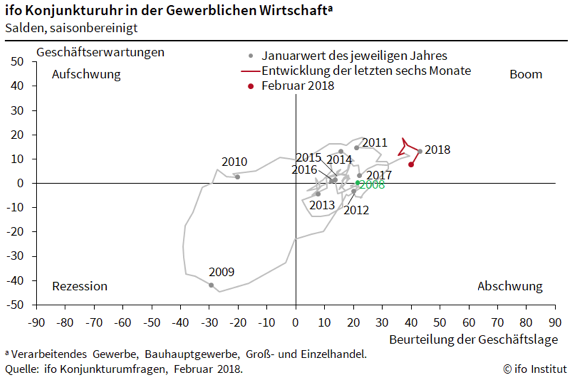 the private-wealth stock market indicator delivered at the end of February ein Verkaufssignal . As you know, this is not about forecasting  Trendwenden exactly on the stock markets. However, we are trying to find out when the relationship between opportunity and risk changes when investing in equities. The logic: Wenn stocks are valued low and the economic trend improves, the probability is high that the stock market will develop positively in the long term. If, on the other hand, equities are expensive and economic expectations are worsening, it is time to become more cautious.

The first question - is the market cheap or expensive? The model answers this question by means of a broad cross-section of economic data: national product, prices, exports, but also company-specific factors such as dividends or tax rates.

The fundamental train of thought was outlined by the great investor André Kostolany a long time ago. Er compared the interaction of economy and stock exchange with the walk of a dog and its owner. While the man - the economy - moves slowly and steadily forward, the dog - the stock exchange - sometimes runs ahead. Oder stays behind. But at some point he always comes back to his master.

The private-wealth trend model thus reflects a kind of "fair value" of the DAX in the light of long-term economic development. A comparison with the current quotes shows how far ahead the dog has run or lagged behind.

According to the logic of the model, the fair value of the DAX is currently around 10000 points. The German stock market barometer is therefore overvalued by around 25 percent. This is not unusual and not really a cause for concern. More problematic, however, is the situation in the area of small and medium-sized values. These have performed twice as well as the DAX since the beginning of 2012 and are now largely extremely highly valued.

However, an overvaluation alone does not initially indicate any higher risks on the stock markets. Initially, it only reduces the future price potential. It only becomes difficult when the very positive expectations regarding the economy and corporate earnings associated with such phases lose momentum.

That is why the answer to the second question about business expectations is so important. The Munich-based ifo Institute provides the answer. Every month, researchers ask 7000 entrepreneurs about their business expectations for the next six months. If expectations fell three times in a row after a previous increase, this (almost) always establishes a new trend. In the past, the major turning points in the economy could thus also be predicted well. After all, those at the helm know best where the wind blows from. 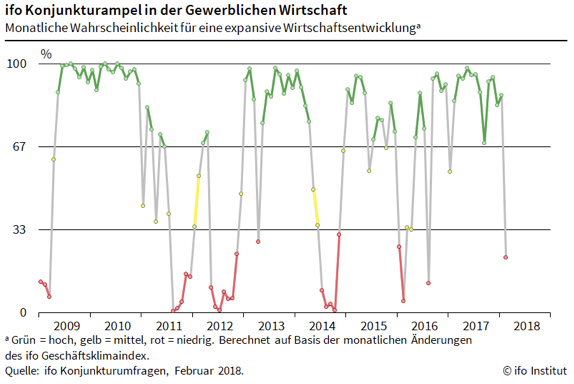 This is why the current result of the ifo survey is so significant. In February, business expectations in the industry declined for the third time in a row. On the ifo economic clock, the German economy is still in the boom quadrant. However, the trend is clearly downward. And the ifo traffic light also shows "red" again for the first time since 2016. (graphics below)

The private wealth exchange model reacts to this combination of high valuations and a possible turnaround in the economy with a sell signal. Interestingly, the economic indicator has become much more volatile in the recent past. In 2014 and 2016, for example, business expectations declined only briefly. So there was no real turnaround in the economy, which then led to a recession. Instead, the economy and the ifo indicator recovered relatively quickly. And the shares repelled as a result of the sale signal had to be bought back later - as in 2006 - at a higher price (table below).

This could of course happen again this time. The stock market indicator does not always predict trend reversals and does not exactly predict them. It is only intended to give an indication of the probability of a successful equity investment in a certain environment. And it is designed in such a way that it prefers to warn investors once too often. After all, the declared goal is to participate in the large, long-term upward movements on the stock markets, but above all to avoid the major downturns. The table below shows how this worked in the past.

The private-wealth stock market indicator now only suggests a stock quota of between zero and 30 percent of the equity component that each investor individually considers to be appropriate in the long term. This means that we are - so to speak - out of the market.

Those who now begin to reduce the equity quota should do so above all in the case of highly valued smaller companies and equities with low liquidity. Another criterion is debt. If there really were a downturn on the stock markets and in the economy, debt would be fatal.

If the economic trend soon reverses, new investments may have to be made at higher prices, as in 2006, 2015 and 2016. That's the price of a piece of security;