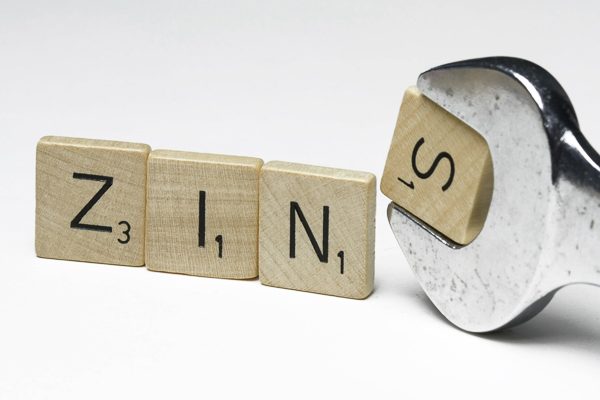 Interest rate trend. The decisive factor behind the declining interest rates of recent decades was a factor that was often hardly noticed - the ageing of society. If the so-called baby boomers retire from working life in the future, the glut of savings in recent years could turn into a savings squeeze. Then interest rates should tend to rise again - with considerable effects on capital investments.

"Time is money" - Benjamin Franklin's work was already called "Advice for young merchants". "Time also plays an important role in the development of interest rates. After all, investors want to be compensated for leaving their capital to others for a certain period of time," explains Timo Schwietering, Head of Capital Market Analysis at Metzler Private Banking.

With regard to the bond market, however, doubts have arisen about this thesis in recent years. In the meantime, investors there are hardly compensated any more for the temporary consumption renunciation. Im Gegenteil: They often even have to pay to be allowed to temporarily leave their money to debtors with strong credit ratings. The European Central Bank (ECB) is mainly held responsible for this situation. With its reaction to the financial and sovereign debt crisis, so the common thesis, it favours debtors and dispossesses the diligent saver. "But that's only half the truth," sagt Schwietering.

Of course, a massive influence of the central banks cannot be denied. Finally, after the financial crisis, the ECB lowered the interest rate at which it itself accepts money from banks to minus 0.4 percent. Since 2015, it has also acted as a major buyer of bonds. As a result, demand for government bonds, among other things, rose sharply. Because many euro states felt compelled to consolidate their budgets, the supply of public debt instruments increased only disproportionately at the same time. "Much more demand and only slightly more supply: Government bonds became scarce, prices rose, yields on the bond market fell massively," Schwietering said.

The thesis that central banks were the sole driver of interest rate development, however, could not be upheld in view of history. "The actual decline in yields began many years before the central banks began to use unconventional monetary policy instruments.

In the USA, the yield on government bonds with a ten-year maturity since 1983 has peaked at 13.9 percent, in Germany at 9.3 percent. Today it is only 3.0 and 0.6 percent. "The downward trend in interest rates has therefore been established for a very long time and has brought investors golden times", macht Schwietering clearly. It was not for nothing that the legendary US investor Warren Buffett once described interest rates as gravity on the capital markets. Theoretically, the value of a share or property is equal to the sum of all discounted payments made to the owner over the life of the investment. This present value increased with falling interest rates.

"Anyone investing capital today therefore needs an idea about the interest rate trend to be expected in the future. And the first step is to look into the reason for the long-term decline in interest rates. We assume that in addition to central banks and cyclical fluctuations, structural factors have also influenced interest rates," Schwietering analyses.

In order to identify these, a country comparison is appropriate. After all, it is primarily the industrialized countries that are affected by the low interest rate. In emerging markets, government bond yields are still significantly higher than in developed markets. "Of course, political imponderabilities, different growth prospects or credit, currency and inflation risks also play a role in the interest rate differences between the respective regions. Equally important, however, are the differences in demographic development. The higher the average age of a region, the lower the current yield on long-term government bonds appears to be - and vice versa. Statistically, around 60 per cent of the interest rate differentials between the countries studied can be explained by the age component alone".

That's impressive. How can this relationship between interest rates and demographics be explained?

"Both factors have contributed to the long-term decline in yields," explains Schwietering (chart below). Specifically, in both the US and the eurozone, about half of the decline in yields in the past is due to falling inflation rates. Die the other half is due to a falling real interest rate.

If there is indeed a significant influence of demographic development on the interest rate structure, the expert continues to consider that this must be reflected in at least one of the two components. It has therefore taken a closer look at these factors.

A study by the Bank of England concludes that a decline in global investment momentum cannot be dismissed. The bigger effect, however, had been a global glut of savings. "This increase in savings capital is closely linked to demographic change. After all, each individual's saving behaviour depends to a large extent on their age," Schwietering analyses with a view to the typical life cycle. 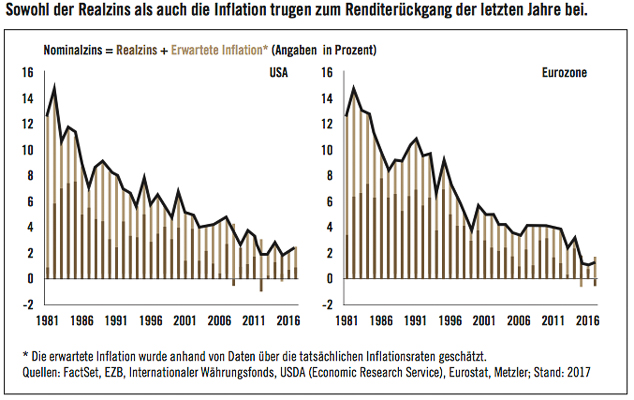 In childhood and adolescence, people are financially dependent on the support of their parents or others to meet their slowly growing consumption needs. At the start of working life, income rises sharply and reaches its peak, at least in the industrialised countries, when savers are between 45 and 55 years old. However, consumption needs change little compared to early adulthood. Because income during this period is significantly higher than consumer spending, individual savings increase markedly. Provision is made to maintain the standard of living in old age.

At the beginning of retirement, a person's income from gainful employment dries up. Consumer spending will, however, increase significantly once again in old age, especially due to higher demand for medical care. Now humans have to attack their reserves - they "save" them (see graph below). 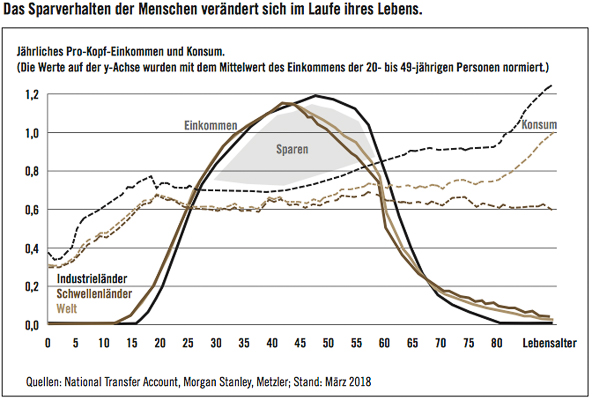 Since in the past relatively few children and pensioners had to be financed by the working population, the conditions for saving money in China were ideal for a long time, and the same applies to China, where the age structure looks similar due to the birth rate around 1965 and the one-child policy that began later. Because the social security systems there are less developed than in Germany, the incentive to save and to build up reserves for retirement was even more pronounced.

"On balance, the macroeconomic savings in these regions exceeded the investment opportunities. Some of the immense savings therefore flowed abroad. Diese Sparschwemme pushed the global real interest rate down," explains the expert.

In the meantime, however, the peak of this development should be behind us. "Looking ahead, the savings capital available worldwide will decrease." The population-rich age cohorts of the babyboomer generation are about to retire. Bald they themselves become economically dependent persons. Then they will begin to consume their savings successively. "Around the year 2015 there was a turning point - unnoticed by many - on the way from a 'flood of savings' to a 'savings clamp'", Schwietering analyses and concludes: "The historically favourable relationship between economically dependent persons and the working population will deteriorate in the future. This should also increase the upward pressure on the real interest rate." 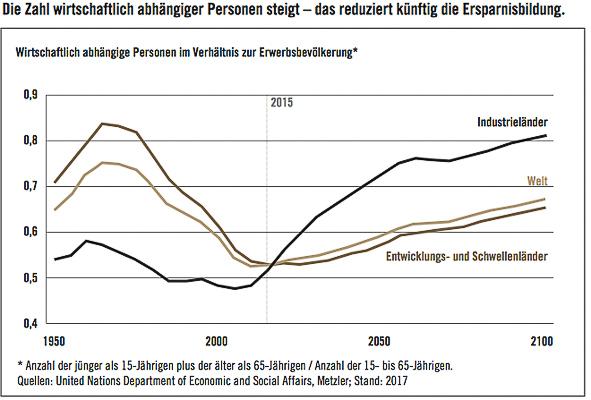 Whether nominal yields in the bond market will then also rise more markedly will also depend on the development of inflation. The rates of price increases in the industrialized countries have been declining since the mid-1970s and have contributed significantly to the decline in the general yield level. For example, the annual depreciation of money in developed economies has fallen from 16.0 percent at its peak in 1974 to 1.1 percent now.

The fact that prices in many countries are currently not rising any faster despite the very good situation on the labour markets is a mystery to economists. For in full employment, employees should theoretically be able to enforce higher wages and thus indirectly cause inflation. "It is possible that changes in the global economic environment will simply be underestimated", Schwietering thinks: "Globalisation, international value chains and the free movement of workers are the key words here".

At the latest since the opening of China, which was initiated in the 1980s under Deng Xiaoping, there has been a change from the local to the global labour market. "For demographic reasons alone, the labour supply in the industrialized countries has grown by around 300 million people from 1950 to today, even without the globalization effect. With China as an additional source of workers, there was a real labour supply shock," the analyst says. This is likely to have contributed significantly to the fact that real wages in the industrialised countries rose only very moderately after 1980.

The exciting question now is: Can this trend continue? "In the meantime, the globalization process seems to be well advanced. It is doubtful whether more is possible," Schwietering doubts. "On the one hand, almost all countries have now joined the World Trade Organization. Zum others, the political rhetoric in important regions, such as the USA, is once again clearly moving in the direction of protectionism. However, the fact is that the supply of labour in the developed economies will shrink in the long term. Demographic change is causing a natural decline in the working population both in the western world and in China. As a result, companies should be prepared to pay higher salaries again in the future. The development of the population is therefore likely to lead to higher prices due to a scarcer supply of labour and rising wages." The consequence: in the future, two structural factors that had long depressed interest rates will lose strength. The "de-saving" of baby boomers should lead to a rise in real interest rates, while higher wages will push inflation rates upwards. "However, it is difficult to estimate how strong the overall rise in interest rates will be. In an ageing society, the dynamics of economic growth and thus the demand for savings capital are also declining. In addition, the globally high level of debt and the triumphant advance of digitization are also having a dampening effect on interest rates," Schwietering points out.

Im Weltbild of Metzler Private Banking, the rise in interest rates will therefore not be dramatic. However, the important message for investors remains: "The decade-long decline in nominal yields on the bond market is history. From now on, the long-term interest rate trend is likely to be upwards," Timo Schwietering is convinced. "For investors, this is a turning point. The recipes for success of the past no longer work." In addition to coupons, bond investors were able to generate steady price gains in the past decades, but losses are now becoming apparent here. "The decades-old bull market for bonds is dying," Schwietering said. "In fact, this process is already in full swing. It still has less to do with demographics than with the gradual exit of the major central banks. The time of price gains in the bond market is definitely over."

This would also make the environment more challenging on the stock market. "But there will still be money to be made here in the future. The key to investment success, however, lies not in index investments, but above all in the selection of individual stocks - stock picking," Timo Schwietering is convinced: "Because the changing conditions will mean that the winners of yesterday will not be the winners of tomorrow. ®