The race to catch up continues. 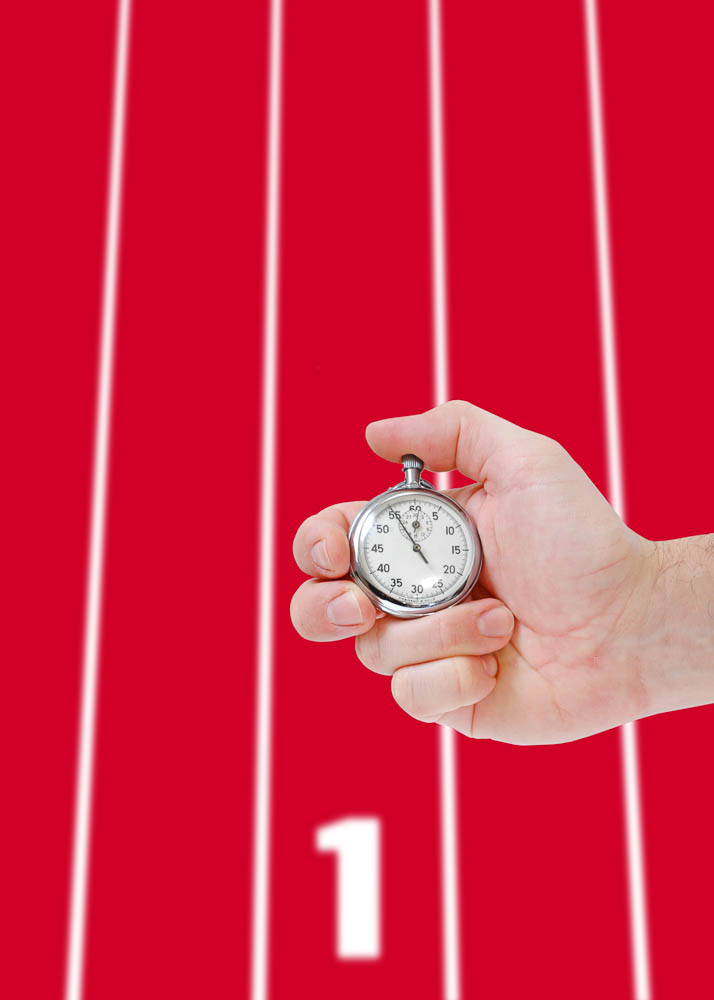 Investment strategy. Emerging market equities were already last year's winners. However, because the shares there are still relatively cheaply valued, it is interesting to further increase the positions.

"Have you ever taken a closer look at Czech stocks?" asks Michael Keppler, "Price-earnings ratio 13.8, dividend yield 6.6 percent, double-digit return on equity. That looks very lucrative. I can't understand why people always say that stocks are generally expensive at the moment. Of course, US stocks are very highly valued. But I don't have to invest in America. My playing field is the whole world. And there are still many promising places."

Michael Keppler has been in the investment business since the 1970s and is one of the most experienced German fund managers. The speciality of his investment boutique Keppler Asset Management is the comparison of individual markets. "We examine the substance and profitability of each company represented in the relevant share index. Then we aggregate the data and arrive at a country evaluation. Now we ask ourselves: How inexpensive is this absolute level in historical comparison? And what does it look like relative to other markets? This is how we arrive at a very objective assessment."

In principle, Keppler therefore assumes a return to long-term average values - for sales, profit margins, but also for valuations. The long-term trend gives an important indication of what a company should be worth. Deviations from this are purchase or sale opportunities. "They arise because market participants are not always rational, but sometimes too greedy and sometimes too anxious," explains the investment professional.

Keppler wants to make use of these differences. "I always ask myself, what do I get today in exchange for investing $100? Since we cannot foresee the future, I want to invest where I get the maximum dividends, profits, book values and annual surpluses."

Today, this analysis takes the expert primarily to the emerging markets. Despite the positive development last year - the MSCI Emerging Markets Index climbed by 27 percent between February 2017 and February 2018 - equities are still relatively cheap there. "The entire asset class - all 24 countries included in the MSCI EM - currently has a valuation discount of 17 percent on the world stock index and 34 percent on the US market," Keppler calculates. "Those who concentrate on the eleven cheapest markets - currently Brazil, Chile, China, Colombia, the Czech Republic, South Korea, Malaysia, Poland, Russia, Taiwan and Turkey - even have a valuation discount of 35 percent on the world index and almost 50 percent on the USA. That's huge. And actually a call to invest much more than before in emerging markets."

The fact that most investors shy away from such a step probably has a lot to do with the history of emerging markets. It is now 38 years since Antoine van Agtmael described a selection of emerging countries as emerging countries. 30 years ago, the index provider MSCI launched its Emerging Markets Index.

This time was a wild ride for investors. In the long term, they were able to achieve around two percentage points more return per year. However, they paid for this with significantly higher price fluctuations. "Since 1990, for example, S&P 500 prices have fallen only four times by more than 20 percent," inform Amit Bhartia and Mehak Dua of the US investment firm GMO, "while emerging markets have seen 22 such corrections. Investors' nerves were thus strained about five times more.

It almost seems as if investors and commentators in the perception of emerging market equities are therefore regularly switching between sky-high cheering and saddened to death. If these markets are just in vogue, the positive arguments come to the fore - population growth, favourable demographics with many young people hungry for success, the economic catch-up potential compared to the "rich" industrial nations, the dazzling long-term growth prospects.

When the wind turns, the focus is on political risks, the poor management of the economy, and the vulnerability of currency and credit markets to shocks. The positive long-term arguments then no longer count.

Depending on which view of things has the upper hand at the moment, there will be massive changes in the relative valuation of the stock markets there compared to those of the industrialized countries.

This can be shown particularly strikingly by comparing the MSCI Emerging Markets Index with the MSCI US Equity Index (see chart below).

At the turn of the millennium, for example, nobody wanted to know anything about emerging markets. The tequila crisis, the Asian crisis and the Russian crisis of the 90s were firmly anchored in the minds of investors. In addition, who needed the emerging markets when Swiss Post was just leaving the developed markets?

The price-earnings ratio (P/E ratio) in the USA rose to 45 - about twice as high as in the emerging markets. These - clearly - had really deserved a huge discount due to the higher risk.

Then the Internet bubble burst, and at some point in 2003 the arguments of investors also changed. The old world was in a recession, growth prospects were now desperately sought after. And were found in emerging markets.

In the next five years, the P/E ratio climbed from ten to almost 40, which means that a dollar profit was valued four times higher than in 2003. In the USA, the P/E ratio only increased from 20 to 25. Emerging markets - of course - had more than earned a 50% premium due to the much higher momentum.

After the major financial crisis, they initially stayed ahead in the favour of investors. No wonder - after all, the crisis originated in the industrial nations. Sometime in the middle of 2011, however, the confidence got a crack. Doubts about the reliability of Chinese data, the end of the commodity boom, recession in Brazil and Russia - didn't we always know that investing in emerging markets was highly risky? 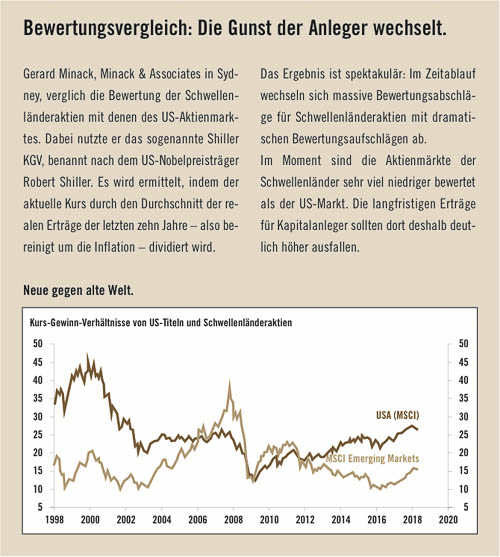 At the same time, the USA experienced a tremendous renaissance. The 50 per cent valuation premium of the emerging markets turned into a 60 per cent discount by the beginning of 2016. "In February 2016, the valuation of emerging market equities was even below the low point of the crisis year 2009," says Jeremy Grantham, GMO, "that was remarkable.

Since then, equity prices and valuations in emerging markets have been rising again. And those who point out the structural advantages of this region are slowly finding their ears again. OECD estimates suggest that in 2030 half of the 25-34 year olds with higher education will come from China and India. And only eight percent from the United States. The difference in the important MINT subjects will be particularly serious. At the same time, the number of medium-sized businesses with purchasing power continues to grow dramatically. An analysis by Bankhaus Merck Finck shows that it took ten years for one billion people there to rise to the middle class. For the next billion, the experts estimate only six or seven years.

And what about the risks? Bhartia and Dua of GMO have identified four triggers of crises from the past. A long-lasting, above-average growth that leads to over-investment and ultimately to a credit bubble. The massive appreciation of the currency through capital inflows from abroad, which later leads to a shock devaluation. As well as the political uncertainty.

Today, according to the experts, emerging market currencies are neither significantly overvalued nor undervalued. After the recessions in Brazil and Russia, growth is only slowly beginning to pick up again. And with one exception - China - credit bubbles are not discernible. Only the upcoming elections in Mexico (July) and Brazil (October) would give a little cause for concern.

"For me, it is particularly important that the emerging markets are not only rated relatively, but also absolutely favourably," Michael Keppler makes clear. "Who concentrates on the most favorable twelve markets, pays straight times the 1.55-fold of the book value and a price profit ratio of 13,8. With such characteristic numbers I earn nevertheless in the long term even money, if the entrepreneurial yields do not grow in the future at all significantly.

In fact, however, the consensus of securities analysts expects significantly higher earnings. In 2015 and 2016, companies in the emerging markets still had to contend with headwinds due to unfavorable economic developments and falling commodity prices. 2017 was a comeback year. And for 2018 and 2019, FactSet - a US research system that summarises investment analysts' forecasts - reports that professionals in almost all emerging markets are expecting double-digit growth in earnings.

When asked how much of the equity assets should be invested in this region, Jeremy Grantham responds with a single sentence: "I would advise you to be as courageous as possible". ®