The view over the valley. 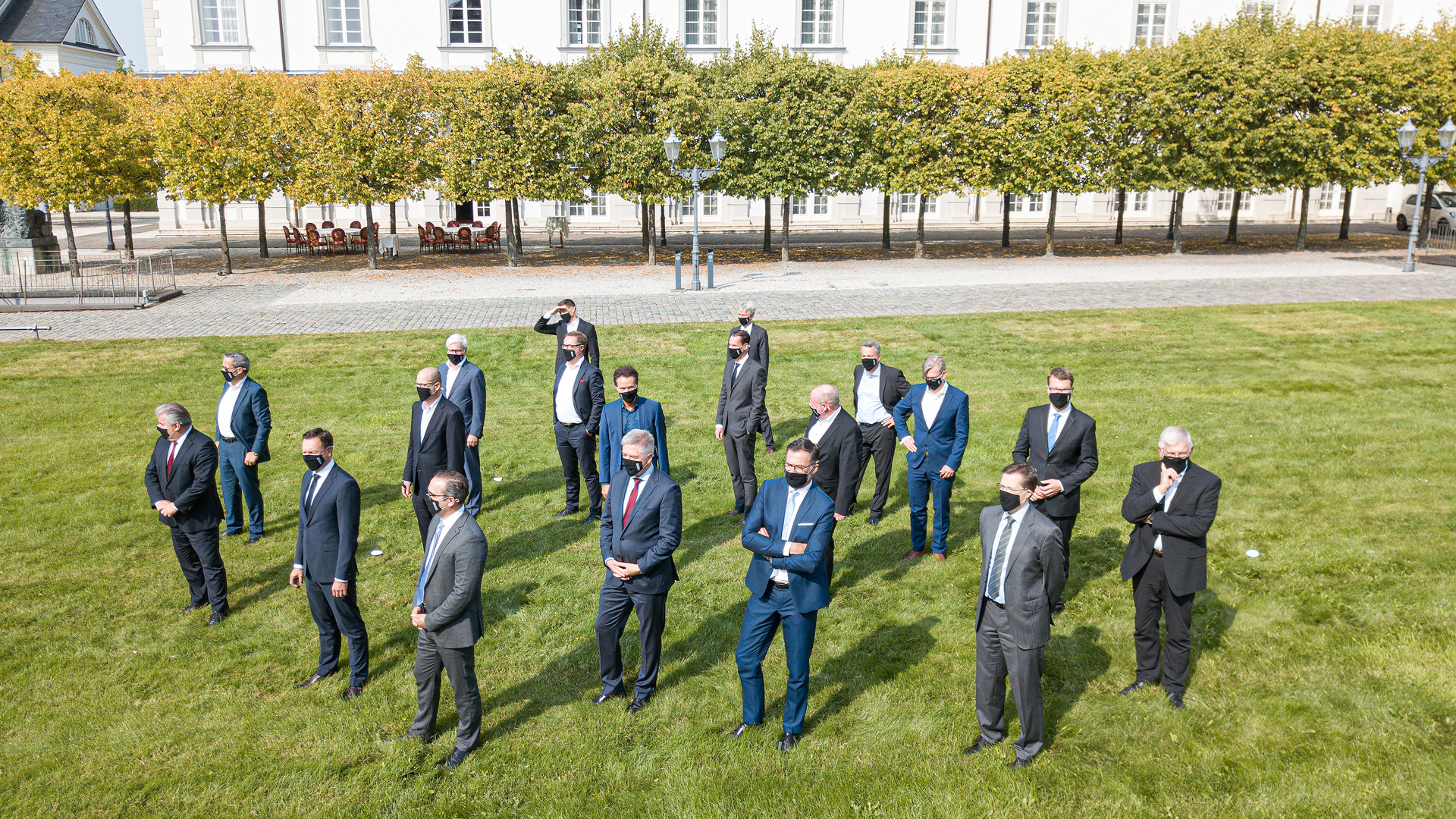 Lerbach round. Since 2010, bankers, asset managers and family officers have been meeting once a year to provide inspiration and guidance to wealthy investors. This year, the experts are not only analysing how the stock markets will react in the face of rising infection figures. Sie are also thinking about what will happen in the markets once we have learned to live with the virus. And in three workshops they discuss the most interesting topics from economic policy and capital investment.

If, if... "To be honest - I have never heard the word 'if' as often as this year at a Lerbach event. "When the number of cases is falling... "If a vaccine is available. When we have learned to live with the virus," says Kai Röhrl, Head of Wholesale Robeco Germany, and continues:  "Because then the answers to all investors' questions will fall like dominoes. Then the economy will recover, then corporate earnings will rise again, then share prices will climb. The difficulty is just: "What happens until then?"

Since 2010, family officers, bankers and asset managers have been meeting once a year at the invitation of von Robeco and private wealth for the Lerbach Round Table to offer readers of private wealth orientation. This year this is a truly Herculean task in view of the uncertainty surrounding weiteren Infektionsgeschehens. Will the second wave plunge the global economy into the next recession?

The professionals believe that at least the German economy will be able to avoid the current lockdown light. "It will delay the recovery, but not stop it," says Carsten Mumm, Donner & Reuschel. "After all, it mainly affects services related to tourism and leisure - that's about eight percent of gross value added. Border traffic is open, the movement of goods continues", Marc Vits, Metzler, encourages. "In addition - unlike im Frühjahr - we do not have a globally synchronized shutdown this time," argues Bernd Meyer, Berenberg. "Above all, the fact that China is recovering so strongly is creating a tailwind in the export economy", hebt Ulrich Voss, Tresono, points out. "Nothing is likely to change in this regard," assumes Timo Steinbusch, Deutsche Apotheker- und Ärztebank, "they seem to have the corona issue well in hand."

Accordingly, most of the professionals are relaxed about the coming year. "There will be catch-up effects. If no machines and cars have been ordered for a long time, there will always be a cyclical recovery," explains Jörg Rahn, Wirtgen Invest. "We should also not forget that a vaccine could now be approved at any time," adds Daniel Oyen, VPC Family Office, "this would increase the willingness to invest and give the economy a push. "And if things do get worse, the government is ready to take fiscal measures to cushion major damage," ist Johann Roßgoderer, MFI Asset Management, convinced.

But there are also sceptics among the experts. "Of course, business will remain open. Aber who buys if he doesn't have to? In the coming months, sales and company earnings will collapse. And the issues of the wave of insolvencies and unemployment will come to the fore again", warnt Michael Gollits, from Heydt & Co. AG. "We shouldn't underestimate this," nods Alexander Ruis, "if the infection figures are already so dramatically rising at the beginning of winter - where will we be then am Ende?

In fact, only about 50 million people in the world have been diagnosed with an infection so far. That is not even one percent of the population. "As an export nation, we would be massively burdened if the number of cases continued to rise around us. Even a foreign corona patient does not buy a new BMW. I don't rule out a further decline in the national product in 2021," Ruis continues.

"That is also the risk scenario for us", confirms Axel Angermann, FERI, "but we estimate die Wahrscheinlichkeit at only 20 percent. In the basic scenario, we still assume that the infection figures can be stabilized and that die Erholung will then only move backwards. What are the experts' concrete expectations?

"The recovery in the economy will of course stutter in the fourth quarter of 2020, especially in Europe, but everything that is lacking in demand then will be added next year," outlines Arne Sand, Sand & Schott. On average, the professionals expect - after the massive decline in real national product in 2020 - für the year 2021 to see an increase of four percent in Deutschland and 4.8 Prozent worldwide. In 2022 the increase is then expected to be more moderate at 2.1 percent and 3.3 percent. Erst in zweiten Halbjahr In 2022 the level of 2019 will be reached again. Remarkably, the forecast corridor for meisten Schätzungen is 1.5 to two percentage points. This reflects enormous uncertainty.

// 02 How will corporate earnings develop?

Because the economic recovery is delayed, corporate earnings are also likely to return to pre-pandemic levels later than previously expected. Im Jahr According to the Lerbach Round Table, the cumulative earnings of DAX companies should be between 700 and 790 points by 2021. Zum Vergleich: In 2019 the figure was still 830 Punkte. Beim US stock index S&P 500, the professionals expect profits between 140 and 160 in 2021 (2019: 162 points). This makes the round somewhat more cautious than the consensus among analysts worldwide. "In the zero interest rate world, however, it is not so decisive when this level will be reached again. More important is the confidence that it will be reached again. And we have that", says Axel Angermann. "We just have to bridge a longer valley now", schließt Thomas Buckard, Michael Pintarelli Financial Services.

"The central banks will continue to dominate die Börsen," Gottfried Urban, Urban & Kollegen, is convinced. FED Chairman Jerome Powell recently described the monetary policy stimulus as "very large", but at the same time predicted that "we may soon reach the point where we have to do more". "The ECB will also step on the gas in December due to the second wave, expanding bond purchases. Next year, new instruments are even conceivable", analysiert Ralf Bringmann, DZ Privatbank. Half of the bankers believe that the USNotenbank FED 2021 will start to control the interest rate structure like the Bank of Japan. Der ECB still trust 35 Prozent with derartigen Schritt. The previously unthinkable, that the market mechanisms bei Anleihen will be completely overridden, thus becomes more and more probable.

// 04 The investment strategy of the Lerbach round.

According to the professionals, it will be very difficult to make returns on the interest markets in 2021. Maximum diversification in a wide range of investments is the key zum Erfolg for all those who need regular income (page 52).

In the long term, the right positioning on the stock market is more important. Compared with the strategic plan, the round still has only a roughly neutral weighting there. "That's a statement in the middle of the second wave," says Angermann. From this level, the professionals plan to overweight stocks in the future. "If prices fall sharply because the infections continue to rise, we buy. And if share prices recover because the infection level is rising, we will also increase our holdings", explains Thomas Neukirch, HQ Trust. In ersten Fall the round considers levels of 11500 points for the DAX and 3000 points for the S&P 500 to be attractive.

The Lerbach round outlines an extremely exciting mixture situation. In the short term, equity investments bear high risks, in the long term there is no alternative. Selbst Alexander Ruis, who takes a very pessimistic view of the economy, holds 50 Prozent of liquid investments in Aktien. "Nominal values are the most expensive and riskiest. There is the threat of a loss of purchasing power due to inflation if the economy picks up, and complete losses if the recession returns and more companies become insolvent. A diversified equity portfolio, on the other hand, will always recover over time," he explains.

And letzten Endes will perhaps yield more returns than many can imagine today. "As soon as more confidence returns, there could be a flight from nominal assets to tangible assets in view of the extremely expansive monetary_ und fiscal policy", meint  Roßgoderer. "We are already seeing the first tendencies in this direction", bestätigt Gottfried Urban, "in the zero interest rate era we will probably have to value shares much higher than before. Das can lead to extreme bubbles in the markets." "We are already fully invested," concludes Marc Vits, "short-term fluctuations can hardly be predicted in this volatile environment. As long as the structural equity drivers are intact, we will maintain our high equity exposure." ®

"Joe Biden will be a cooperative partner in multilateral affairs. Trade conflicts will not disappear, but now we will negotiate, not punish. "Uncertainty will be reduced. And that is positive for the markets," Thomas Neukirch outlines. "Europe in particular is benefiting. Penalties for the car industry should be off the table. Und If Biden now initiates the energy turnaround, many European companies will have know-how advantages", meint Carsten Mumm.

However, the important race for the Senate is still open. "It would be positive for the stock markets if it remained in Republican hands", überlegt Timo Steinbusch, "then Biden could not so easily turn back the corporate tax reform. "Gridlock equals Goldilocks," Bernd Meyer sums it up. "But then the programmes for infrastructure and renewable energies would be smaller," Rahn points out.

"Should the Democrats take the Senate, we would have to reconsider the positions im Techsektor, überlegt Arne Sand, "Kamala Harris wants to smash the monopolies." "But this will definitely remain an issue," assumes Bernd Meyer, "Trump concentrated on trade policy because he could decide on his own there. If it's like Biden, he'll be pushing for regulation.

Half full - half empty: what equity investors should be looking for in the coming year.

The Lerbach round identified ten factors that could lead to a positive or negative development on the stock markets in the coming year. The professionals estimated the probability of occurrence and the expected influence on the stock markets on a scale of one to ten (in the table below, the respective events are sorted according to the presumed influence on the price development).

The chart shows how the Lerbach Round would structure the liquid assets of an average investor willing to take risks with a view to 2021 compared to the previous year. It is important to note that experts are currently still cautious in view of the rising number of infections. However, they would like to use the capital parked in their coffers to increase the equity ratio to over 50 percent.

"As far as regions and sectors are concerned, after the election von Joe Biden, I would now give Europe a higher weighting," advises Mumm. "There could also be a revaluation of all 'green' investments," adds Urban. "We plan to expand the internationalization strategy towards Asia," reveals Thomas Buckard. "China is particularly important," adds Gollits. "The country has presented an ehrgeizigen Fünf annual plan in which it will provide more than two trillion US dollars for modern, digital infrastructure. The tech stocks there are auf Augenhöhe with den Amerikanern and the middle class is growing rapidly. In an uncertain world, I want to be invested where growth is most likely." "But it's hard to value the companies there Investing only works through good funds," Ralf Bringmann makes clear.