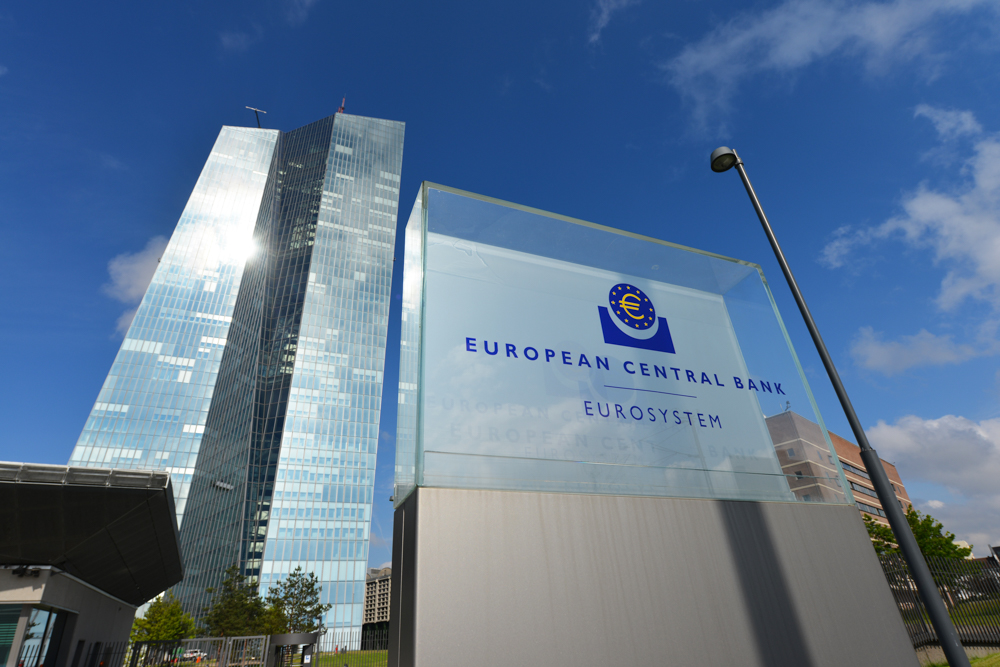 Ten years ago, on 26 July 2012, ECB President Mario Draghi promised in the face of the euro crisis at the time: "Within our mandate, the ECB stands ready to do whatever is necessary to preserve the euro. And believe me, it will be enough." It worked. Since then, "whatever it takes" has determined ECB policy. However, the first half-sentence "within the framework of our mandate" hardly matters any more.

In the ten years since then, the European central bank has massively expanded the money supply, bought government bonds on a huge scale, manipulated interest rates downwards and engaged in prohibited monetary state financing. Above all, it thus abolished the steering function of the interest rate and replaced it with the wisdom of the ECB Governing Council, which is convinced that it is smarter than the market.

Today it is clear that the central bankers hopelessly overestimated their abilities: When money costs nothing, speculative bubbles are created that eventually burst. And if the money supply grows faster than the quantity of goods, prices will eventually rise. Clearly, the central bankers do not have as good a grip on inflation as they have led us all to believe. And this is not only due to Putin's war. Already in January 2022, the inflation rate in the euro area was 5.1 percent!

For those who still believe in the legend of the unpredictability of the comeback of inflation, I recommend the Christmas lectures by former Ifo President Hans-Werner Sinn from 2020 and 2021. In them, Professor Sinn explains very precisely and crystal-clearly what is in store for us.

The key question for investors now is: What does this mean for the future of the euro? "Whatever it takes may have preserved the euro. That does not apply to its purchasing power. Against the US dollar, the European currency has lost at least about 20 percent of its purchasing power in the last ten years. So is the ECB making the euro a soft currency?

I just read an intelligent analysis by Dieter Wermuth. Wermuth, born in 1940, worked for the German Council of Economic Experts in the 1970s, then for several banks in Germany and abroad, and is a truly independent thinker. I hope you enjoy reading it.

The euro - a soft currency

Ten years ago, Euroland's nominal GDP per capita was 29,230 euros, that of the USA 40,190 euros. At present, it is 37,160 euros in the monetary union and 71,840 euros in America. Although Europe's per capita GDP has increased by 27 per cent in this period, America's, in euro terms, has increased by 79 per cent. In relative terms, Europe has become poorer, can buy less for its currency. For many Europeans, especially highly qualified and talented ones, the incentive to emigrate to the USA (or Switzerland) is now very strong; there is a so-called brain drain, which affects the international competitiveness of our continent. Imports have become much more expensive than exports. The main reason for both: the weak euro. 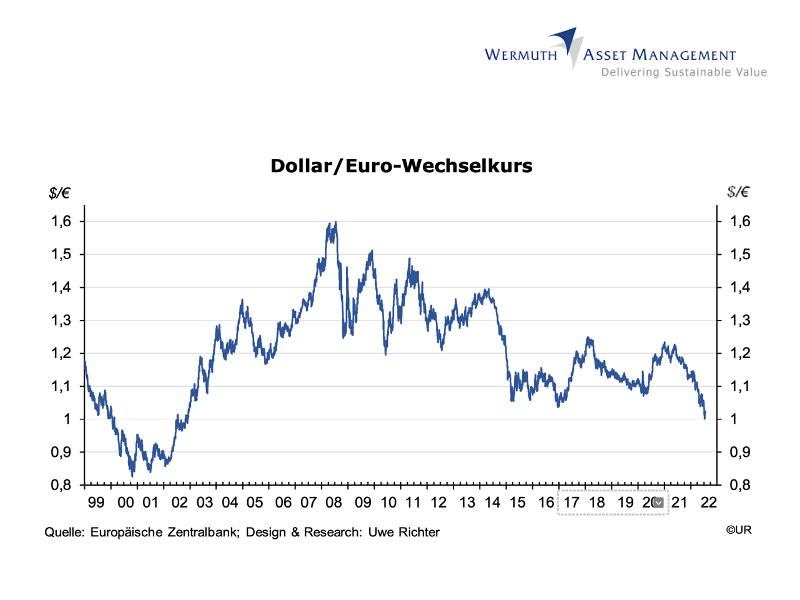 How could this come about? In the past, a currency tended to appreciate when the current account was in surplus, because that meant that the demand for the currency from that source was greater than the supply. The argument may still hold today, but it seems to have lost its force: Euroland has had a surplus for a long time, while the US has had a deficit for what seems like forever. Current account balances no longer play a role.

Ditto the situation with public finances. The larger the deficit, the higher the government debt, the less sound the fiscal policy. If a country is not so careful with debt, participants in the foreign exchange markets conclude that sooner or later it will try to devalue it through monetisation, i.e. at the expense of those who hold assets in that currency. This creates selling pressure, which leads to devaluation. No longer true either: on average, Euroland's aggregate government budget deficit since the beginning of the Corona crisis has been 5.2% of GDP, in the USA 10.6% (in each case including an estimate for 2022). According to calculations by the International Monetary Fund (IMF), general government debt in relation to GDP was - and is - also significantly higher in the USA than in Euroland: currently 126% to 95%. Nevertheless, even this does not impress the currency markets. Despite these figures, the euro area countries are more likely to have unsound public finances.

The problem is, of course, that the USA is a state with a uniform fiscal policy and a huge military apparatus, whereas the monetary union is only a group of states that are autonomous in their core competences. That they always stick together, through thick and thin, is by no means a foregone conclusion, as can be seen again in the new Italian election campaign, and also recently in France, or in the solo runs and blackmail attempts of Hungary and Poland. If things get serious, the USA will have to come to the rescue. Hardly any investors seem to expect Western Europe to be able to withstand a Russian attack on the Baltic states. They will therefore prefer to keep their money in dollars rather than euros, even though the inflation outlook is much worse in the USA than in Euroland in terms of wage development.

In addition, the US central bank is taking much more decisive action against inflation than the ECB, i.e. it has raised interest rates earlier and more sharply. This may end in a recession, but since the labour market continues to do extremely well, the Fed is only slightly daunted by this prospect. US key interest rates are likely to rise to around 3% before the end of the year, thus continuing to exceed European levels - and by more and more. There is more money to be made on the US money market, especially in nominal terms, less in real terms.

Moreover, the ECB's reputation is not particularly good: it does not behave in a market-neutral way, as one should expect, but on the side pursues structural policies that actually belong in the portfolio of other state institutions, for example by favouring "green" securities over others in "quantitative easing", recently directly influencing the yield spreads of bonds of different provenance (countries), or rewarding banks for increasing their lending above certain minimum levels. The fact that it has been announcing for many months that it will raise key interest rates by 25 basis points this July, but instead raises them by 50, has not exactly improved its reputation.

Should we seriously worry about the weak euro? In principle, a strong currency is something desirable because it improves purchasing power and changes the economic structure towards those products and services that can be sold despite high costs and prices, which in turn guarantees high incomes. In the long run, it does not pay to be a low-cost provider. After recessions or in the early stages of economic development, undervalued currencies are useful, as for example in Germany after the war. But when there is already a large capital stock and the labour force is well educated and motivated - and there is de facto full employment - it makes no sense to sell off one's products and services, so to speak. A fixed exchange rate means having to constantly improve its supply. Such a supply creates its own demand - it establishes trends and runs ahead of the market instead of panting after it with cheap products. In other words, in the long run, a weak euro does no good. This, as the reader will have noticed, is a plea for more rapidly rising European key interest rates and an appreciation of the euro.

Instinctif Partners // Lars Hofer E This email address is being protected from spambots. You need JavaScript enabled to view it.
T +49 162 562 8917

Wermuth Asset Management (WAM) is a family office that also operates as a BAFIN-regulated investment advisor.

The firm specialises in climate impact investing across all asset classes, with a focus on EU 'exponential organisations' as defined by Singularity University, i.e. companies that can profitably solve a major problem facing humanity and grow exponentially. The company invests in private equity, listed investments, infrastructure and real assets through its own and third-party funds. WAM adheres to the UN Principles of Responsible Investing (UNPRI) and the UN Compact and is a member of the Institutional Investor Group on Climate Change (IIGCC), the Global Impact Investing Network (GIIN) and the Divest Invest movement.

Jochen Wermuth founded WAM in 1999 and is a German climate impact investor who served on the steering committee of Europeans for Divest Invest. Since June 2017, he has also been a member of the Investment Committee for the €24 billion Nuclear Waste Management Fund (KENFO).

The information in this document is for informational purposes only and is not considered investment advice. The opinions and assessments contained in this document are subject to change and reflect the viewpoint of Wermuth Asset Management in the current economic environment. No liability is assumed for the accuracy and completeness of the information. Past performance is not a reliable indication of current or future developments. The financial instruments mentioned are for illustrative purposes only and should not be construed as a direct offer or investment recommendation or advice. The securities listed have been selected from the universe of securities covered by the portfolio managers to assist the reader in better understanding the issues presented and do not necessarily form part of any portfolio or constitute recommendations by the portfolio managers. There is no guarantee that forecasts will occur.

How to earn it Silke Lauenstein 456
"The best is yet to come," said Wolfgang Trier a…

How to earn it Silke Lauenstein 523
In the latest issue, private wealth told the…

Editorials Klaus Meitinger, Moritz Eckes 477
Dear readers, We are actually hesitant to use…

Opinionleader Prof. Jochem Marotzke 452
What are the scientific facts around climate…

How to earn it Klaus Meitinger 718
entrepreneurship. The couple Martine and…