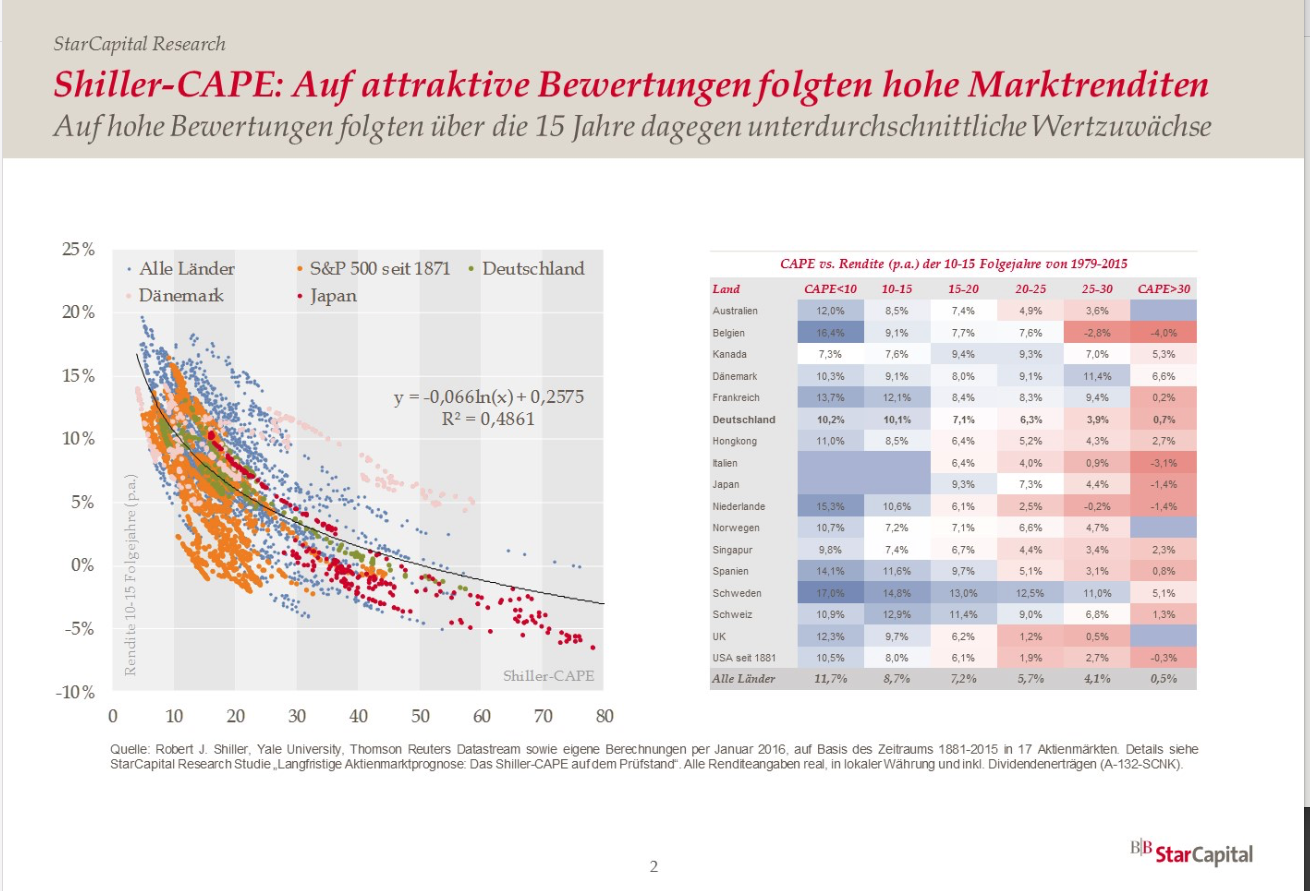 Investors are very interested in such information. First, the consensus in the financial industry is always positive. Therefore, major corrections in the past were never predicted by him. And secondly, the DAX estimates for the next 12 months since 2000 were on average 18 percent off target," Keimling informs, concluding: "So if the DAX closes 2,500 points above or below this 'target', investors should not be surprised.

According to the expert, stock market developments cannot be reliably predicted over the course of a year. This is because unforeseeable events have a short-term impact on share prices. "It is therefore much more interesting to look at probable long-term yield developments. Because statements can certainly be made about this," says Keimling.

The starting point for these considerations is that corporate earnings tend to rise at rates of between five and ten percent over the long term - i.e. over economic cycles. How this is then translated into price gains on the stock markets depends primarily on their valuation level on the starting date: "We have found that in the past there was a strong correlation between the current market valuation and the increases in value over the next 15 years," explains Keimling. "If a stock market is highly valued, future earnings will be low in the long term. In extreme cases, prices even stagnated. If, on the other hand, valuations were favourable, the stock markets experienced high increases in value over the next 15 years. The current valuation is therefore the most important determinant when it comes to assessing opportunities and risks on the stock markets.

Keimling identified the relationship between price and book value and the so-called Shiller price-earnings ratio, which relates current prices to long-term earnings adjusted for economic cycles, as the most important valuation criteria. "Investors who, for example, always invested in German shares when the Shiller-KGV was quoted below 10, achieved average annual increases in value of over 10 percent in the following 15 years. On the other hand, those who entered the markets with a Shiller CAPE of more than 30 could just receive the capital for the next 15 years. At 0.7 per cent, yields were very meagre," Keimling calculates.

According to the expert, this correlation has been valid for decades (the statement for the Shiller PTO underlines the graph below). If it is now assumed that this pattern will not change in the future, the current valuations of both indicators can be used to calculate what investors in the various markets can expect to earn in the long term with a high degree of probability (table below). These results help to identify attractive and less attractive investment targets.

The US stock market is particularly highly valued at present. "There the annual yield potential for the next 15 years is only 2.7 percent. Much more interesting, on the other hand, are the stock markets in Germany, Japan, the UK and especially the emerging markets. Long-term returns of between seven and eight percent are likely there," Keimling informs.

In the long run this makes a huge difference. With a return of 2.7 percent per annum, one million euros will become almost 1.5 million in 15 years. If, on the other hand, investors could generate 7.5 percent annual return, the profit would be four times as high - instead of 500,000 euros, it would be two million euros. So one million becomes three. "The US bad guys have been attracting more and more investors over the past decade, mainly thanks to technology stocks. This resulted in a higher rating than elsewhere," explains Keimling, and concludes: "I could well imagine that this will change in the next 15 years. They probably belong to the investment markets of Asia and Europe".

Shiller KGV: The Shiller KGV sets the market value of a public limited company in relation to its profits. In contrast to the conventional price-earnings ratio, profits are smoothed over ten years and at the same time adjusted for inflation. This indicator was developed by Nobel Prize winner Robert Shiller.

Book value: The book value describes the substance of a company - financial assets and tangible assets, such as machinery, warehouses or real estate The relationship between market value and book value gives an indication of the valuation of the company on the stock exchange.