Of chaff and wheat. 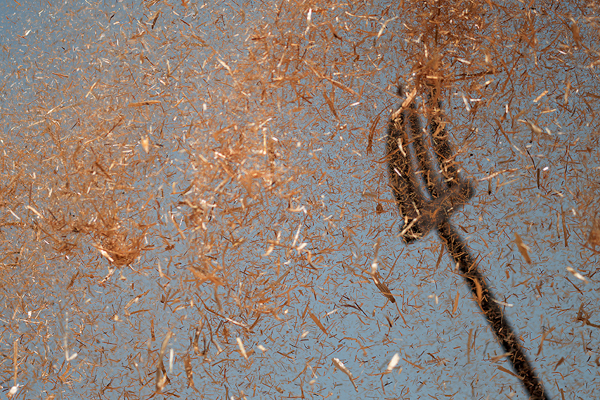 "Basically, the stock market environment does not look so bad at all," says Carolin Schulze Palstring, Head of Capital Market Analysis at Metzler Private Banking, "The tailwind is coming primarily from the more expansive monetary policy this year, which is not limited to the USA and the Eurozone. "Central banks around the world are back in easing mode."

An analysis by Bankhaus Metzler shows that while in the past the share of central banks in the interest rate cut mode was over 60 per cent, this was accompanied by average increases in value on the global stock markets of 8.1 per cent per year. 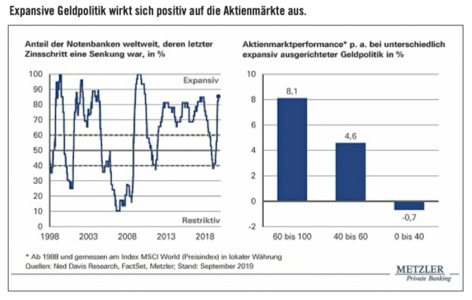 Even with a medium degree of expansion in global monetary policy - between 40 and 60 percent of the central banks lowered interest rates - the share price performance was still around 4.6 percent annually. If significantly more central banks raised interest rates than reduced them, im Schnitt saw price losses on the stock market.

"Currently, the share of central banks whose last interest rate step was a cut is again 85 percent. This is good news for companies, as falling interest rates generally also mean more favourable financing conditions, thus increasing their flexibility in this respect. And for investors this means that the expansionary monetary policy speaks for the attractiveness of equities - especially in comparison to the currently unprofitable asset class of bonds," explains Schulze Palstring.

However, this only applies to the stock market as a whole. "Not all that glitters is gold," warns the expert. The low interest rate environment of recent years has also been accompanied by side effects. "In principle, companies benefit from permanently more favourable financing conditions. At the same time, however, the lack of financial pressure reduces the incentive to manage companies efficiently."

In this context, the Bank for International Settlements (BIS) has examined whether the share of poorly economic and hardly viable enterprises has increased in recent years. The group of these companies is also referred to as "zombie companies".

According to the BIS definition, a zombie company is one in which a company is unable to cover its interest expenses through operating profit for three consecutive years. In addition, it should have been on the market for at least ten years. Very young companies usually need time to operate profitably and have therefore not been included in the BIS analysis.

"The investigation revealed that the share of zombie companies has increased sixfold since 1987 from around two to twelve percent. Particularly during periods of recession, the increase gained noticeably in momentum and never returned to its original level in the subsequent, better economic times," informs Schulze Palstring. In addition, it has been demonstrated that within the group of zombie companies, the reduction of debt since the 2000s has been noticeably reduced. "The incentive to initiate uncomfortable restructuring measures or to part with unprofitable business areas is apparently diminishing with an ever lower interest rate level."

If there is no enthusiasm for restructuring, however, there is a greater danger of never escaping the vicious circle of excessive indebtedness and a simultaneous lack of profitability. Accordingly, the probability of remaining in the group of zombie companies has risen from 60 to 85 percent over this period.

"From an economic point of view, it is problematic if an increasing number of unproductive companies remain in competition despite or precisely because of low financing costs. The group of zombies ties up resources, such as labour and capital, which could be used more efficiently in more efficient companies. In this respect, Schumpeter's process of 'creative destruction' no longer seems to work in the low-interest environment. This leads directly to a dilemma: an expansive central bank policy is intended on the one hand to stimulate the real economy, but on the other hand it artificially keeps unproductive companies alive longer, which in turn weakens the overall performance of the economy.

From the investors' point of view, it might therefore seem obvious to focus more on younger, innovative companies. In keeping with the spirit of the times, many investors are attracted to companies that, for example, occupy future fields related to digitization, automation or artificial intelligence. Particularly in a generally weaker growth environment in the developed economies, many players on the stock market are seeking their salvation in promising growth sectors. Often they also have the hope that they have already invested in the next multi-billion dollar company at an early stage.

"However, the fear of investors that they will miss out on something is the only reason why possible investment risks are relegated to the background - for example, that the majority of companies that are currently listed on the stock exchange in the USA show a loss instead of a profit", überlegt Schulze Palstring.

One of the companies newly listed this year had even expressly warned in the run-up to its own IPO that it might never be able to operate profitably. However, investors were not deterred by this and queued up to enter the trading floor. "Overall, the share of US companies that made no profit at the IPO last year was around 75 percent, the highest figure since the dotcom bubble. 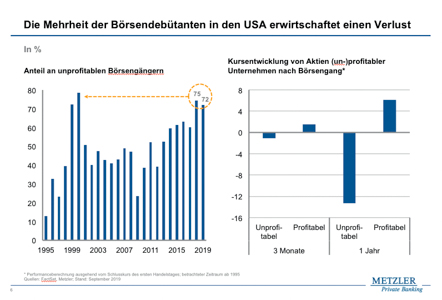 This year, with a share of 72 percent, things are hardly looking better. It's a warning signal. But many investors don't seem to care about that in a world of cheap money."

According to the expert, the current "popularity" of unprofitable newcomers to the stock market can at best be reconstructed with the prospect of an above-average price development. However, in view of the performance in three and twelve months after the IPO, the loss-making companies clearly appear to be at a disadvantage. 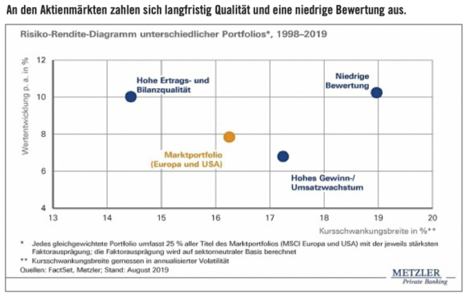 Over both periods, unprofitable companies recorded an average price loss, while the value of profitable companies rose. "The hunt for returns in the low-interest environment seems to drive not only bond investors but also equity investors into a higher risk appetite than before," concludes Schulze Palstring.

What should be the orientation of investors who neither want to run the risk of investing their money in a zombie company nor feel the enthusiasm to participate in loss-making stock market newcomers?

"If there is such a thing as legality in the stock market, then it is the certainty that the share price of a company will not develop better (or worse) than the underlying fundamental data in the long term," explains Schulze Palstring. This connection can be demonstrated by looking at the past 150 years on the US stock market. Over this long period, the trend in the stock index was determined by the development of corporate earnings. Phases of price exaggerations and extreme market pessimism alternated again and again. In the long run, however, the index has always followed the course of fundamental developments.

"This results in three basic criteria that influence the long-term development of the share price," concludes Schulze Palstring, listing: "In order to attach value to a company, it must first be able to generate earnings in the long term. Secondly, it is beneficial to the enterprise value if profits grow. And third, investors are still wondering what they are willing to pay for the combination of fundamentals and growth."

Bankhaus Metzler has therefore carefully analysed which of these three criteria - growth, solid fundamentals and valuation - was the historically strongest performance driver.

"Carolin Schulze Palstring explains: "The average increase in value of a global portfolio of European and US equities - measured over a period of around 20 years - was around eight percent per anno (chart below). We have now taken a look at how, in comparison, cheap stocks, quality stocks and growth stocks have performed."

Growth stocks are companies with an above-average profit or turnover dynamic. With an annual increase in value of around seven percent, this stock group achieved a worse long-term result than the market as a whole while at the same time fluctuating prices more widely.

At first glance, this may seem surprising, as growth stocks in particular have enjoyed a strong media presence in recent years and are already being celebrated as winners in the current stock market cycle. However, the perception seems to be distorted in this respect. The term "growth stocks" is associated primarily with large technology stocks from the USA, which have indeed performed above average in recent years.

If the entire pool of growth equities is considered across all sectors, then the growth criterion alone does not appear to be a harbinger of above-average long-term share price performance. "After all, high growth often goes hand in hand with even higher expectations of the future development of the respective company. The risk of disappointing investors is correspondingly high, which often results in price losses," explains Schulze Palstring and concludes: "Corporate growth alone does not seem to be the key to long-term success.

How did a portfolio consisting exclusively of quality stocks perform?

Quality stocks are defined as stocks with high earnings and balance sheet quality. These include companies with an above-average profit margin, a high return on equity and low debt. Historically, at ten percent per annum, this portfolio achieved significantly higher growth in value than the market as a whole, while at the same time fluctuating at a lower range. "Quality seems to pay off in equity investments as well."

The third portfolio comprises only stocks with favourable valuations and a low price relative to fundamental data. In addition to quality shares, this so-called value portfolio has achieved the best increase in value since 1998, averaging 10.2 percent per year, albeit with relatively high fluctuations. For investors with a long-term horizon, however, the price fluctuation margin should only play a subordinate role, as it loses importance with the length of the investment horizon.

"It is interesting to note that despite the historically respectable performance of value stocks, this group is under strong pressure in the current environment", informiert Carolin Schulze Palstring, "because in times of money glut and low interest rates investors are increasingly neglecting the valuation criterion and are relying on the fact that already expensive stocks are becoming even more expensive.

In the course of the year to date, exactly this pattern can be seen: The group of most expensive stocks performed best. "For a time, this constellation may endure. Allerdings we are sceptical that the logic behind it can last for a long time. On the contrary, in terms of wealth preservation, we are convinced that it cannot be wrong to avoid significantly overvalued stocks, even if this is not en vogue at the present time and among many market participants."

The carelessness of many investors when buying overvalued shares is by no means unique. The bursting of the Internet bubble at the beginning of the 2000s was also preceded by a pronounced phase of weakness in undervalued stocks.

The conclusion von Carolin Schulze Palstring: "In the current environment of high political economic risks and expansive monetary policy, we rely on a balanced equity portfolio with an investment ratio of 85 percent. We remain true to our investment style and avoid the long-term risks associated with buying significantly overvalued securities. Instead, we rely on companies with solid fundamental figures and a functioning business model." ® ®.

How to invest it Gerd Hübner 72
Blockchain. The digital representation of…

How to invest it Threadneedle Management Luxembourg S.A. 75
Small Caps. Shares of smaller companies, they…

How to earn it Mariella Bauer 69
Handmade. Instead of rapid growth, the Munich…

How to earn it Yvonne Döbler 66
Expansion strategy. In 18 years, Wolfgang Trier,…