Despite rising infection figures, the economic recovery in the German economy is continuing with increased momentum. The upswing scenario established since July 2020 has thus been further consolidated. This is underlined by the latest surveys of the ifo Institute on the business climate and export expectations. In March, these even rose to their highest level since January 2011!

Particularly impressive is the development in industry, whose expectations are an important indicator for the private-wealth stock market indicator. There, things are moving steeply upwards at a rapid pace. The ifo Institute reports that demand has picked up noticeably in all industrial sectors. Expectations are now as optimistic as they were last in November 2010.

That looks good. But the absolute highlight of the latest Ifo Business Climate report for us is that the Munich-based researchers have just recalibrated their economic clock. We have already presented this chart to you many times in this space. It shows at a glance which economic phase the German economy is in - recovery, boom, slowdown or crisis.

In the last few months, the message of the clock has been a little difficult to interpret. For example, the economic clock had already reached the boom sector again in September 2020, which was difficult to reconcile with the actual reports from companies at the time.

The reason can be found in the calculation method. To determine the balance of company reports on the business situation and business expectations, the percentage of negative responses is subtracted from the percentage of positive ones. If these balance out, the balance is zero. A balance of zero was therefore previously defined as the mathematical normal state of the economy and therefore corresponded to the crosshairs of the Ifo clock.

However, analyses by the Ifo Institute show that the long-term mean - i.e. the true normal state of the economy - was always reached in the past at balances well above zero. In order to be able to depict the true situation of the economy on the business cycle clock, the crosshairs had to be adjusted to the actual normal state and shifted accordingly. This is exactly what the ifo Institute has now done. You can see the difference in the figures below - on the left you see the "old" business cycle clock from February, on the right the "new" one from March. In fact, the crosshairs of the new business cycle indicator have been shifted upwards to the right by the respective mean values. 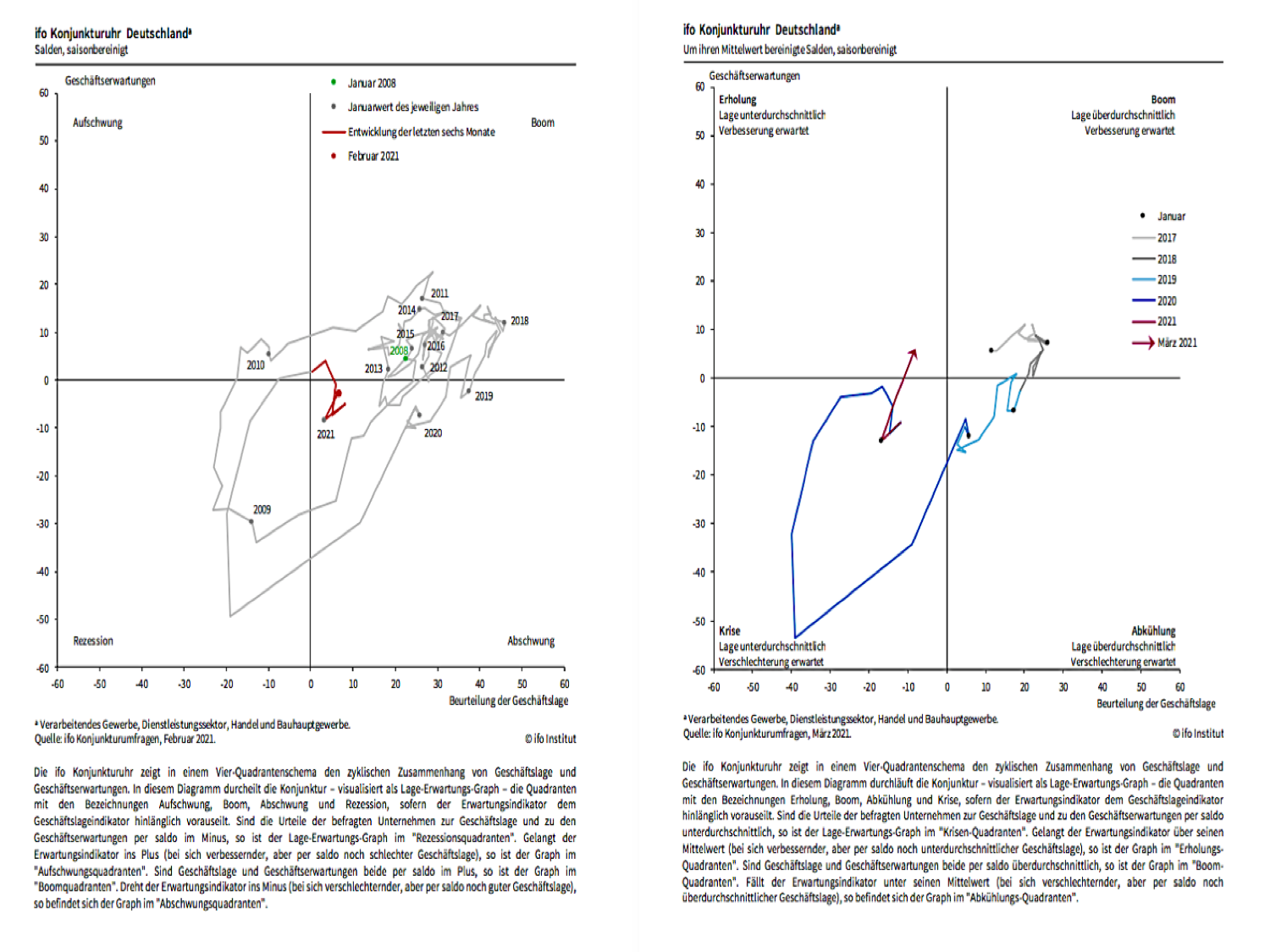 We think the new form of presentation - the basic data have not changed - shows better where the economy is. According to it, Germany has just left the crisis quadrant and is now in the recovery phase. It also makes it easier to understand the idea of the private-wealth stock market indicator. We want to be invested when the economy moves from the bottom left (crisis) to the recovery to the top right (boom) on the ifo clock. And we tend to want to be on the sidelines when it moves from top right (boom) through downturn to bottom left (crisis).

The current message for investors is that there is still a long way to go before the boom quadrant overheats. The economic component in the private-wealth stock market indicator, taken in isolation, could indicate a green light for equity investing for a long time to come.

As the Ifo economic indicator continues to be positive and the seismograph has also been unchanged for months, an overweighting of equities seems advisable. Currently, the "green" probability, which suggests a calm market with a positive trend, and the "yellow" probability of a turbulent market with a positive expectation roughly balance each other out. "Red" - turbulent market with negative expectation - continues to play no role. "Green" probability has actually gained share recently. This is positive and strengthens the recommendation that has been valid for a long time: clear overweighting," summarizes Oliver Schlick, who as managing director of Secaro GmbH calculates the probabilities and links them to investment recommendations.

A month ago, we pointed out that the concrete shape of the equity weighting depends on whether the narrative of an economic boom and significantly rising corporate earnings combined with persistently low interest rates remains valid.

In concrete terms, we therefore calculate two scenarios for you. In the first case, to which we ourselves currently attach greater probability, the assumption is that the "zero interest rate era" of the major central banks will continue for a long time (we assume ten years for the calculation). Nevertheless, corporate earnings are rising in line with the trend of recent years. Then the private-wealth stock market indicator would advise an equity allocation in the corridor between 90 and 120 percent of the capital earmarked for equity investments. And since the seismograph considers an overweight to be prudent, the specific equity allocation of the stock market indicator would be 110 percent.

Those who believe in the "old" world, where interest rates rise along with the economy, must be more cautious given the high valuation in the markets. In this case, an equity quota of 90 percent of the capital earmarked for equities is currently indicated.