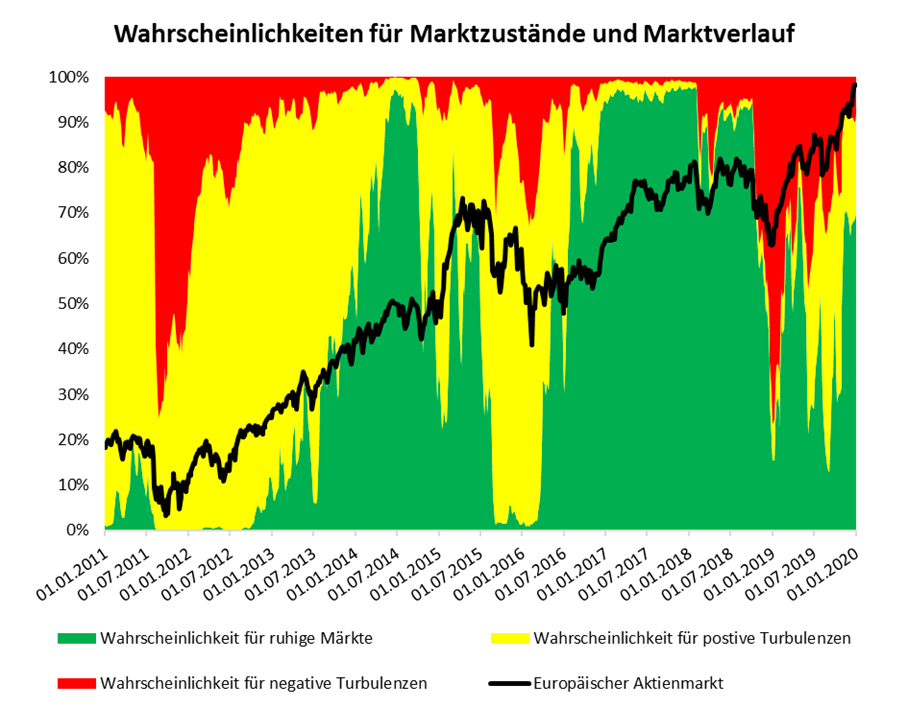 It's no easy task. This is because models that try to do this have problems, especially in so-called zigzag markets. If an upward trend is interrupted by sharp corrections, they sell after an initial drop in price in order to avoid a possible further fall at that moment. If the mood on the stock market changes again quickly, new investments must be made at significantly higher prices. If this happens more often, the performance will naturally be significantly worse, as if the investor had simply remained invested. This is the price of insurance against a stock market crash.

Was the seismograph convincing from this perspective in 2019?

"All in all, I can say that the approach has done very well in the past year despite a difficult environment," Schlick sums up. To make it more concrete, we carried out a small computing experiment in the editorial office of private wealth. On the one hand, there is a mixed portfolio of 50 percent European shares and 50 percent cash. In this portfolio - without any change in the allocation - around 14.5 percent income was generated last year. If an investor had changed the equity ratio between zero and 100 percent over the course of the year according to the seismograph signals, his total return would have been just over 16 percent. Particularly noteworthy: In all critical phases of the investment year - January, May and August - the actual equity ratio was very low. If a real downward trend had been established at that moment, major losses would have been avoided.

This result is all the more remarkable as the year 2019 did indeed present some major challenges for the seismograph. In view of the serious threat of recession, there was a risk, for example, that the stock market would continue to fall at the end of 2018. "At the time, the seismograph diagnosed massive thunderclouds and therefore advised a very defensive weighting," recalls Schlick. When the central banks then unexpectedly changed their monetary policy and massively stepped on the gas again, the stock markets immediately reacted very positively in January 2019, and the seismograph depot was initially not included. From February onwards, the seismograph data improved again and the indicator now gave the green light for a very high equity weighting. "Thus the backlog from January to the end of April could be turned into a lead".

The situation was similarly difficult in May and August 2019, when stock market prices also corrected sharply downwards in the short term. "The darkening perspective with regard to the trade conflict between the USA and China, as well as the risk of recession, as read by the market from the inversion of the yield curve, caused the probability of negatively turbulent markets to increase dynamically and again led to a strongly defensive orientation of the seismograph," explains Schlick.

Here, too, the situation on the stock markets eased very quickly. There was a V-shaped recovery. The seismograph reacted with a short delay and then again suggested an above-average offensive equity weighting. "Interestingly, this was also maintained in October, although the market dislocations in that month assumed similar proportions as in August. At the time, however, the probabilities at the seismograph by no means indicated the danger of a prolonged sharp decline", explains Schlick and almost together: "In the end, the management of the equity ratio, especially through the positioning between February and April and from September onwards in relation to the year as a whole, led to a very pleasing result in relative terms".

That's very encouraging. On the one hand, participation in upward phases was successful even in a difficult environment and, on the other hand, defensive weightings were not only established very quickly in the event of disruptions in the market environment, but also corrected again without long delays when the thunderclouds cleared.

We use the results of the capital market seismograph for short-term positioning within the corridor suggested by the private wealth stock market indicator. Since 18 December, the latter - derived from the economic outlook and the valuation of the German stock market relative to its fair value - has been advising a stock weighting of between 30 and 70 percent of the individually planned stock proportion.

As the seismograph currently provides for a significant overweighting, the specific equity weighting should be in the upper range of the proposed range.