No all-clear for the economy 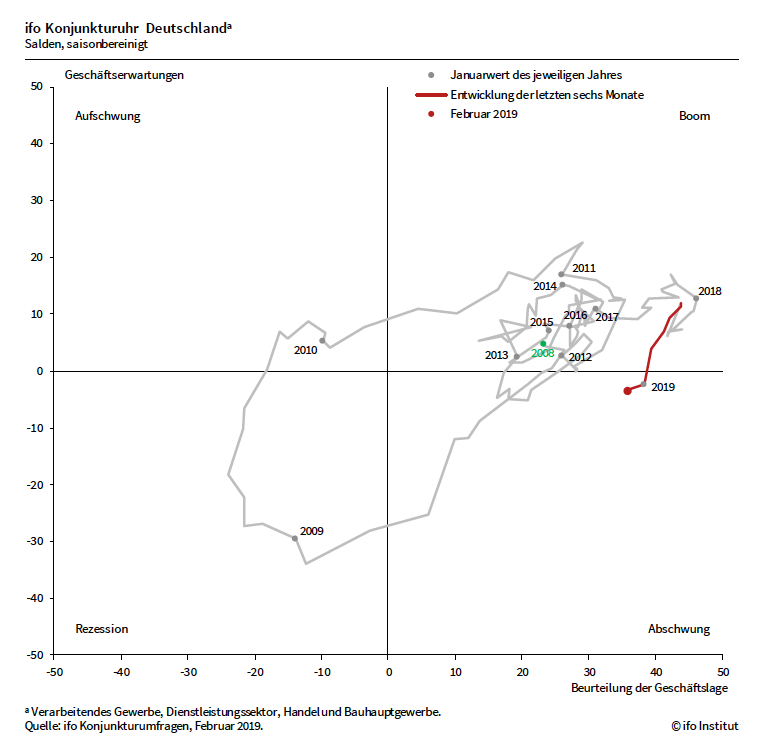 The ifo business climate continued to fall in February. The worries in the German executive floors are increasing, according to the Munich economic researchers. The results of the ifo survey and other indicators would point to economic growth of 0.2 percent in the first quarter of 2019. After a minus of 0.2 percent in the third quarter and a black zero in the fourth quarter of 2018, this means that the German economy is stagnating.

It can get even worse in the future. As you know, we are closely monitoring the expectations of the 9000 entrepreneurs surveyed by the ifo Institute. These point further down. Pessimism is increasing across the board. This is particularly pronounced in the industry, which is so important for Germany. According to the ifo economic clock, the German economy has thus established itself in the downturn quadrant. The ifo traffic light is still on "red" (attached graphs)

It is interesting to note that this no longer seems to worry investors on the stock markets. They assume that the global economic weakness will remove the issues of interest rate hikes and liquidity withdrawals by central banks from the agenda. This is positive for the stock markets.

At the same time, there is a broad consensus that the global economy will recover in the coming months. After all, China is giving more gas again via both monetary and fiscal policy. In the USA - and to some extent also in Europe - consumption is growing stably in view of record low unemployment rates. All over Europe, states are also planning to spend more money in the future. And last but not least, the expected end to US interest rate hikes and the appreciation phase of the US dollar have also improved growth prospects in the emerging markets. A solution in the trade dispute and/or in the Brexit drama - so the conviction - should improve also the tendency in the economy fast again.

That sounds plausible. Alone - why does the ifo indicator then fall further? Shouldn't this have long since been reflected in the expectations of entrepreneurs? As long as the ifo indicator does not indicate a turnaround, the downturn thesis continues to apply. In this environment, it is likely to be difficult for companies to meet analysts' still ambitious profit expectations.

For the short-term positioning within this corridor we use the results of the capital market seismograph. Since this improved on 11 February, the equity ratio in the model of the private-wealth stock market indicator is 20 percent.