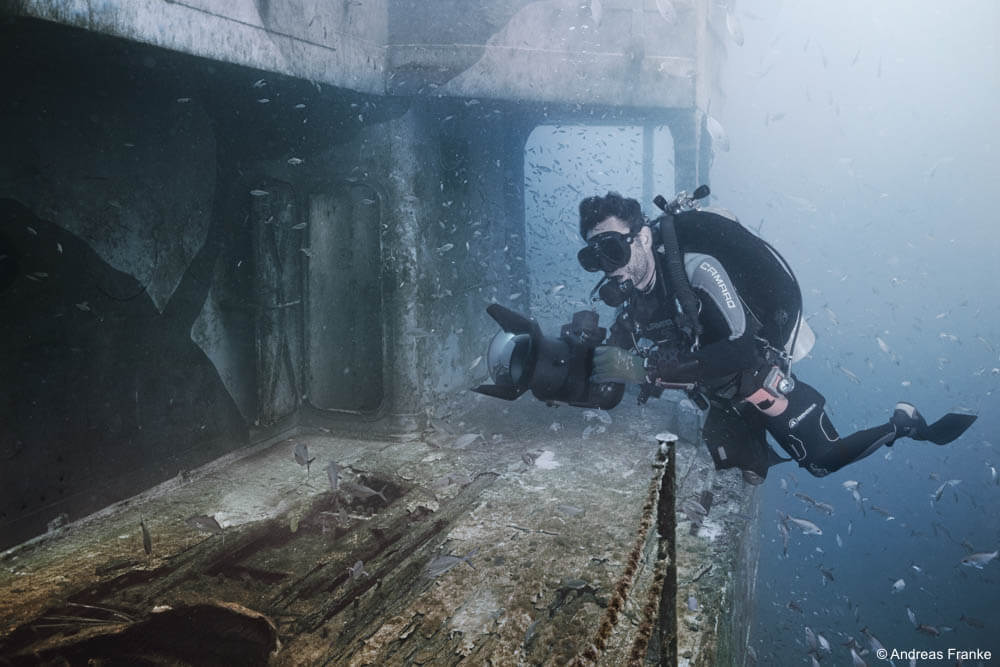 Sponsorship. The Viennese photographer and diver Andreas Franke (above) provides his photographic art with a political statement. Shipwrecks at the bottom of the bikini atoll form the backdrop for his anti-nuclear message. He is still looking for supporters for the implementation.

"We all still have this Cold War in our minds, the idea that tomorrow may simply be over," says Andreas Franke, born in 1967. Suddenly, at the beginning of 2017, this feeling was there again.

That the international political balance of power is out of balance, nuclear weapons suddenly represent a real danger again. The photo artist is obviously not alone with this uneasiness. It's even shared by the Norwegian Nobel Committee. This year's Nobel Peace Prize was awarded to the International Campaign for the Abolition of Nuclear Weapons (ICAN).

Frankes' anti-nuclear weapon is the camera. "I can't write, I can't paint, I can only protest as an artist with the means at my disposal," Franke explains. In June of this year he travelled for two weeks to the Bikini Atoll in the Pacific Ocean. The place where the U.S. conducted nuclear weapons tests between 1946 and 1958. To this day, the bikini atoll is uninhabitable for humans, but radioactivity has spread to the sea. At a depth of 60 metres lie the wrecks of the ships sunk to test their nuclear resistance - to this day contemporary witnesses of the belief in nuclear deterrence. Franke takes 6000 photos of six wrecks, including the Prince Eugene, one of the two large German military ships that were brought to the Bikini Atoll in 1946 and sunk during Operation Crossroad. He wants to mount everyday situations into these underwater photos. A woman with a shopping bag in her hand, for example, another with a child in her arms. His message: Anyone can be affected at any time. "We sit at the table, talk to each other, and right now it happens, we get wiped out."

The passionate diver developed the special way of composing his pictures at the beginning of the 1990s. "At that time, photo composing, a special technique in which different parts of a picture are digitally joined together, was still a special skill," recalls Franke. As a creative always on the lookout for new motifs, "for images that have not yet been seen", the photographer first dived on the reef, photographed fish and corals.

But "the much bigger kick" was given to him by shipwrecks, these silent protagonists of a bizarre underwater world. The Austrian Baron Gautsch, also known as the Titanic of the Adriatic, is the first underwater wreck he photographs. When he looks at the pictures at home, however, he thinks: "Quite well, but there is still something missing." He copied a person he had just taken in the studio into the photo.

On a diving trip to Egypt in 2009 Franke reads an article about the sinking of the Vandenberg in the Florida Keys National Park. And was immediately "turned on".

The Vandenberg is a US-American warship from the Second World War. Built in 1943, it is used both as a missile carrier and as a troop transporter. Now it's supposed to become some kind of artificial reef. To create new habitats for flora and fauna on the seabed with this special structure. "Several million dollars were invested in the costly purification of oils, asbestos and other harmful materials. That immediately interested me."

One year later, the Austrian visited the Vandenberg at a depth of 30 metres, equipped only with a camera and an oxygen cylinder. "The problem with underwater pictures is the very special light. Due to the density of the water and the suspended particles, there is only a certain foresight. It's a bit like a foggy day", erklärt Franke. It is also fascinating that the different colours depend on the sea. There is no need for additional light sources. Photographs can be taken at depths of up to 60 metres without any problems.

At this point he has the finished composition already in his head. The result is pictures of seesawing ballet dancers on the mossy railing, children riding tricycles with teddy bears in their hands on the foredeck, or men boxing in front of the huge satellite dish. "Every shipwreck is a stage that I can play on with my ideas."

On his return flight from Florida to Vienna, he thinks of exhibiting the finished pictures under water at the wreck of the Vandenberg. Why? "Unique selling point," answers the marketing firm Franke. "Where else is there a photo exhibition that's shown at a depth of 30 meters?" In addition, images change when they have spent three to four months in the sea. The sea water penetrates under the frames and leaves streaks on the photo. Different sea-dwellers like mussels or tube fan moss animals deposit themselves on the pictures.

Only magnets are used to attach the one metre by one metre fifty photos to the shipwreck. And they're getting a lot of media coverage.

At short intervals, Franke is now following up with two further projects. He photographed and edited the Stavronikita off Barbados and the Mohawk, also off Florida, a warship from the Second World War that, among other things, had radioed the weather data for D-Day. He summarized the three projects under the title "The Sinking World".

Franke now hopes for a similar echo in the photo project "The Nuclear Fleet". "Because this is a real matter of the heart to me." The pictures of "Sinking World" would not be offensive, would be rather lyrical. "The Nuclear Fleet", on the other hand, is supposed to make a difference, "something can rub there". On the one hand, he deliberately chose the Bikini Atoll as a "terrible victim of nuclear irresponsibility".

On the other hand, he hopes that these images will cause a stir and intensify his "silent artistic protest in the global struggle for nuclear disarmament".

So far, the artist has financed the preparations out of his own pocket. Now 24 images are to be created. In order to actually realize the project, he needs sponsors. "Only the production of the pictures will cost more than 100,000 euros. I can't do this alone anymore."

From mid-May 2018, the pictures will be hung on the Vandenberg, his "gallery ship with the perfect walls".

Franke should then be sure of media attention again. Through his American gallery owner Howard Rosenbaum, the photographer has already had contact with the organization Global Zero, the most important American association for a world free of nuclear weapons, supported by Hollywood greats such as Robert De Niro, Matt Damon and Michael Douglas. "Global Zero has shown interest in integrating the Nuclear Fleet project." The organisation is planning a series of conferences at the Vatican and will also be celebrating its tenth anniversary in December 2018.

Will Franke's future lie in art photography with political statements? He doesn't want to say it so absolutely. "But if the project really makes a difference, you get addicted to it." And there would still be so many explosive topics. Pollution with plastic in the sea, for example. "When I close my eyes, I have a lot of pictures in my head."

Art with statement - the Prix Pictet.

The Prix Pictet, which has been awarded every 18 months by the Swiss bank Pictet since 2008 and is endowed with 100,000 Swiss francs, is one of the most prestigious art prizes for photography and sustainability.

A group of international journalists, gallery owners and art connoisseurs propose works by photographic artists from all over the world for the prize. This approach creates a "broad spectrum of known and lesser-known artists," explains Loa Haagen Pictet, curator of the prize. An independent jury nominates a shortlist from the proposed works and then selects the winner.

The Prix Pictet was launched with the idea that "we all have a responsibility to society," says Danish-born Loa Haagen Pictet. Issues such as environmental pollution, child labour or migration and refugees therefore play a major role.

"Artists act like seismographs. They look at social conditions with critical and sensitive eyes," explains Loa Haagen Pictet: "We see our prize as encouragement, even for very established and successful photographers. Sie should thus be given a certain freedom, albeit limited in time, in order to be able to think completely freely and realise projects without financial pressure, the realisation of which would otherwise perhaps not have been possible."

It is important to the jury that they really carry a message when selecting images. It was about asking questions that were relevant right now. The respective topics are not narrowly defined, but rather associated with open terms such as "water", "growth" or "space".

The winning pictures of the past show that the jurors actually interpret the topics broadly. A picture by the Canadian photographer Benoit Aquin, which shows air pollution in China, was awarded for the term "water". The theme "Earth" won "Sunday Picnic" of the Israeli Nadav Kander, who shows a family at the Chinese Yangtze River under a motorway bridge in the megacity Chongqing.

The current prize winner of the leitmotif "Space" is the Irishman Richard Mosse with his series of pictures "Heat Maps", which can be translated as a map of body heat (top).

With a thermal imaging camera designed for military use, which can identify living creatures day and night from a height of 50 kilometres and is used for border security, Mosse has created images of refugee streams and camps. The winning picture shows the shooting camp in Berlin-Tempelhof. Mosse thus tries to initiate a discourse about the fact that millions of refugees and migrants set off to find themselves in a kind of limbo, excluded from social life.