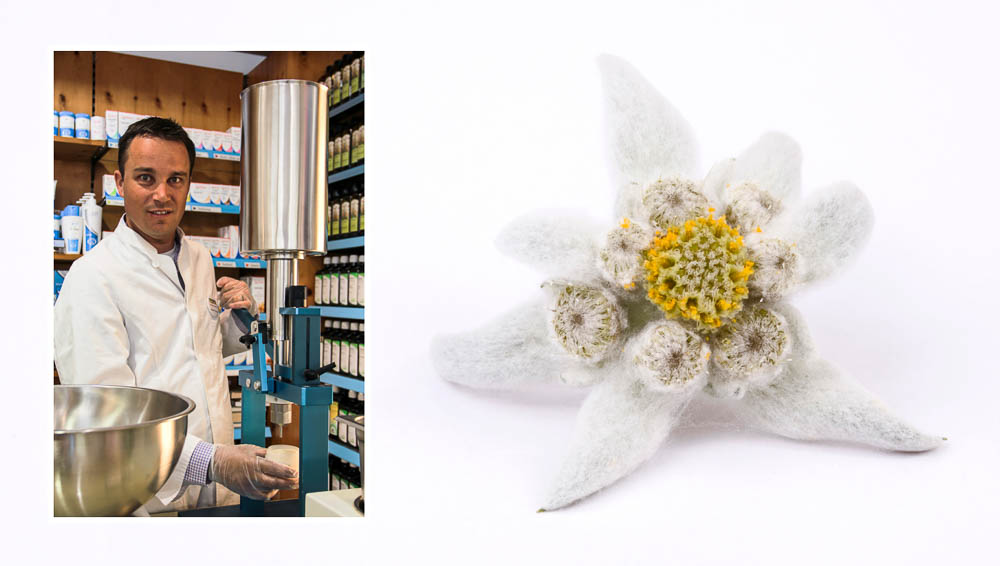 Natural products. A small company from Graubünden in Switzerland has found a lucrative niche with Edelweiss products. The family of herbalist Astrid Thurner produces natural cosmetics from the strictly protected Alpine flower.

The Snow Queen, a fairy-like figure, sits enthroned on the mountain tops and seduces men with her beauty to daring climbing tours. If they fall to their deaths, the Snow Queen sheds a tear on the rocks from which an edelweiss springs. Other traditions claim that edelweiss has magical powers and protects its wearer from evil spirits. "There are countless myths surrounding the edelweiss. I particularly like the one with the powers," smiles Patrick Thurner. 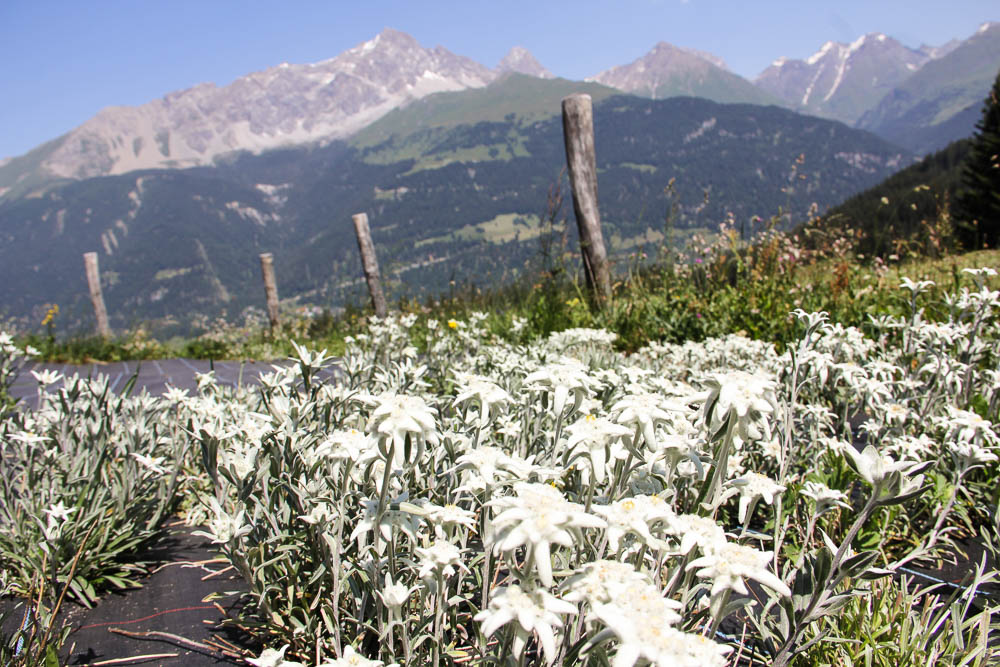 Because it grows high up on stony mountain slopes and is difficult to reach, Edelweiss has long been regarded as a symbol of heroic daring in romantically transfigured love poems, stories and songs. "Even in the USA, Latin America and Asia, everyone knows the Queen of Alpine Flowers thanks to the love film 'The Sound of Music' or 'My Songs - My Dreams' from 1965," Thurner says. "If a travel group from these regions was in the shop, the shelf is quickly bought empty." Thurner in the Surses drugstore in the Swiss Savognin region offers the powers of edelweiss in distilled form.

Since 2005, Astrid Thurner, 63, has been making use of the plant's valuable ingredients here. "Already in the 19th century the edelweiss was called 'Bauchwehbleaml' and used in folk medicine against diarrhoea, dysentery, cough and sore throat. But that's not all. With its habitat between 1600 and 3400 metres above sea level, Edelweiss has developed highly effective protective mechanisms to survive in intense sunlight and cold. That's why Edelweiss extracts are perfect for protecting and caring for our skin." The furry flower star contains around 60 ingredients. The tannins and vitamins A and E, for example, have an antioxidant effect. They can strengthen the skin and repair small damages.

"I wanted to do something with the Edelweiss much earlier, when I was still teaching cosmetics at the vocational school in Chur." All the conditions were met: Interest, knowledge and even a business. After all, Astrid's husband had been running the Surses drugstore since 1969.

However, one challenge could not be mastered: procurement. Because the "lion's foot", as the botanical name Leontopodium translates, was intensively imitated for so long, it was one of the first plants to be placed under strict protection. The use as a medicinal plant or as a basis for special cosmetics was out of the question.

It was not until the 1990s that the Swiss Agricultural Research Station Agroscope succeeded in cultivating edelweiss. The first edelweiss cultures are planted in the Valais mountains. "This cleared the way for our Edelweiss business model."

In 2008, Astrid Thurner will lay out her first own field with the white, heavily hairy plants at an altitude of 1600 metres. 1200 plants thrive there over Savognin on a calcareous southern slope. The second plantation, from which the Thurners now obtain Edelweiss, is three times the size. A farmer friend of mine has been farming it since 2005 in the Upper Engadine near Sankt Moritz at 2000 metres above sea level. "The higher the edelweiss is cultivated, the more substances the plants contain," explains the entrepreneur.

It's a nice business, but it's also a tedious one. Cultivation, care and harvesting - everything has to be done by hand. In very dry phases the plants need water, sometimes also a little lime fertilizer. If the weeds sprout in the plantations, they weed. "A useful plant can then only be harvested for between three and five years. That's why we have to replant in certain areas every year."

In midsummer, when the white flowers are fully ripe, they all help together. The Thurner family of four and the nine employees of the drugstore cut off the flowers individually. Then the plants are gently dried in the sun. Particularly large flower heads are pressed and offered individually as souvenirs. A total of between 100 and 150 kilograms can be harvested on both plantations. The yield is not the same every year. "Last year was a good year," says the son Patrick Thurner, who runs the drugstore today.

Edelweiss extract is made from dried flowers. "Water, alcohol and glycerine give the best results. For certain creams, we make an oily extract." In the meantime Patrick Thurner has developed a complete line of Edelweiss cosmetics - ranging from body, hand and foot creams, moisturising masks, hand lotions and shower gels to bath additives and massage oils. All without preservatives or chemical additives, of course: "That's part of our philosophy."

Drogaria Surses offers edelweiss schnapps and edelweiss herbal tea for "care" from the inside. 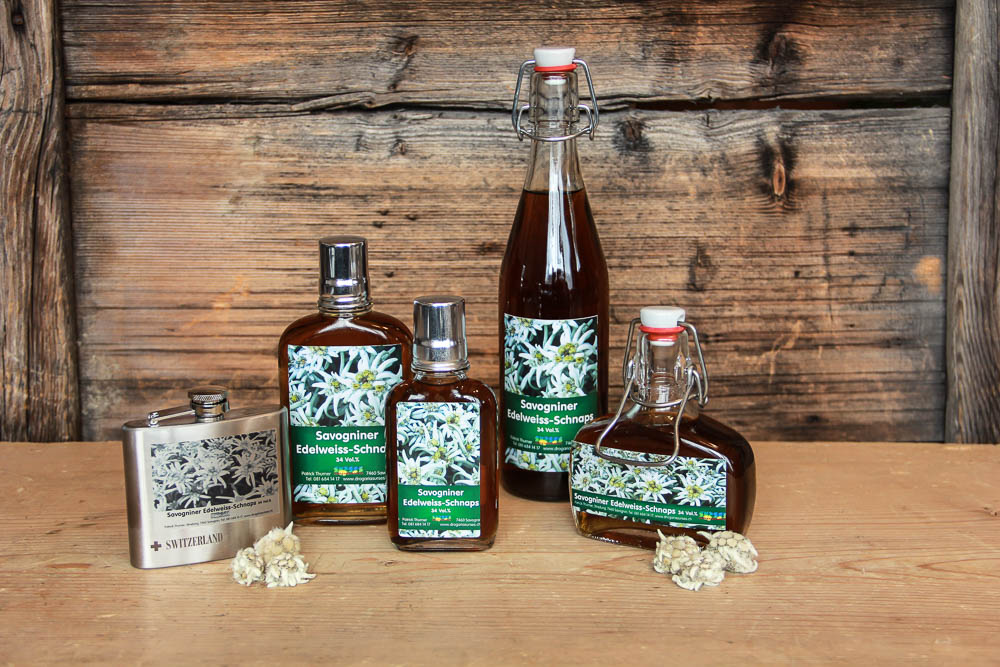 The products around the Edelweiss have today become an important pillar of the family business. "Without this, the company would not be able to employ nine people." Sales in the ski region are too dependent on the winter season for this. The Edelweiss business balances out the seasonality somewhat. In the weaker summer months everything revolves around the plantations, the harvest and the production of the cosmetics line. In the high season in winter every hand in the drugstore is used. 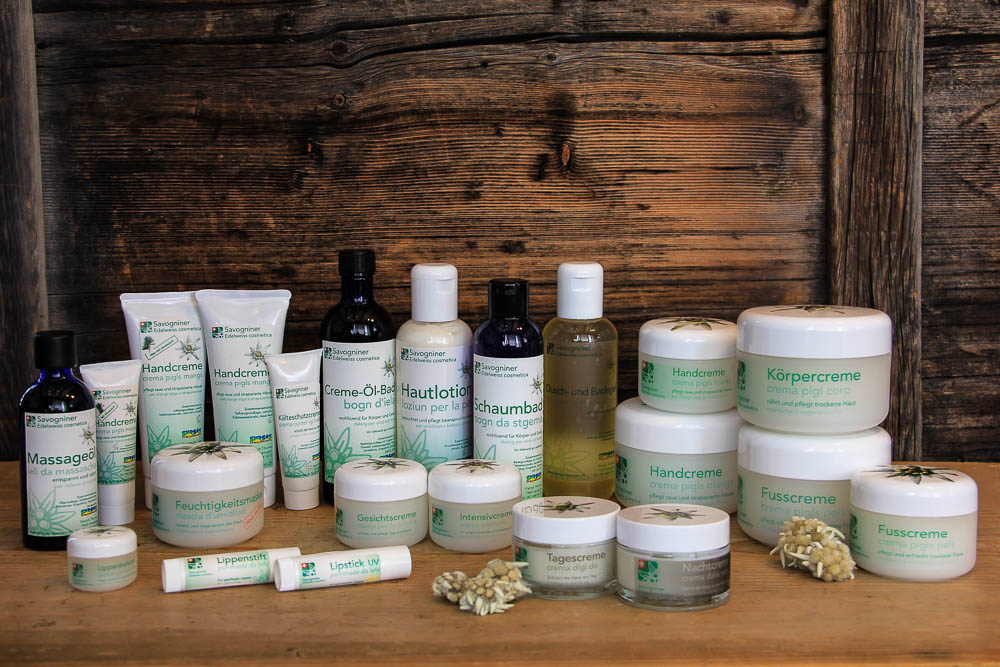 Patrick Thurner is not afraid of competition. If you want to enter the small market with edelweiss products, you first have to invest a lot: Areas under cultivation are scarce, rearing is laborious and production facilities are expensive. "I don't think that would be possible on an industrial scale," Thurner says. "Edelweiss products will always be something for small batches."

The natural cosmetics company Weleda is now planning a somewhat larger step. It had already failed once - in 2008 - with an edelweiss sun cream. The mineral UVA filter of natural cosmetics had no longer met the recently raised requirements of the European regulations. Now Weleda has developed a new formula and will launch it in February. "I don't see any competition in it," Thurner remains calm, "it's more of an advantage for us. Because it gives the edelweiss and cosmetics even more recognition, especially outside Switzerland."

In contrast to the European Union, edelweiss is even approved and very popular as a foodstuff in Switzerland. Edelweiss extracts can be found in yoghurt, beer or as tea and also as schnapps. With the latter, non-Swiss visitors from the Thurner family's Edelweiss range, which includes not only cosmetics but also Edelweiss herbal tea and Edelweiss schnapps, can stock up during their skiing holiday or order online at Drogaria Surses.

Astrid Thurner is now only in the shop once a week. After handing over the business to her son Patrick in 1999, she completed her training as a homeopath. In summer, it takes interested visitors through the flora of the Swiss mountains three or sometimes four times a week. In this way she passes on her extensive knowledge of the flowers and herbs of the Alps. ®

Professor Hermann Stuppner from the Institute of Pharmacy at the University of Innsbruck predicts that the potential of edelweiss is far from exhausted. Scientists have been researching the active ingredients of the Alpine flower for years. Approximately 60 ingredients were isolated and examined individually. The researchers extracted a derivative from the flowers and leaves of alpine edelweiss, which they call edelweiss acid. It is DNA-protective, binds free radicals in the body and also protects against harmful UV radiation.

From a medical point of view, however, the root of the plant has a much greater potential than the flower. The scientists found leoligin, a promising metabolic product, in it. It has an inhibitory effect on the molecules that transport harmful blood lipids and can lead to calcification of the blood vessels. The researchers tested the substance on mice by implanting a leoligin depot directly into a pathologically thickened carotid artery. Result: The vessel diameter decreased from an average of 43 micrometers for untreated animals to 15 micrometers for treated animals. Now there is hope that Leoligin could also achieve a similar effect in humans. Before clinical use, however, all potential dangers have to be clarified.

Science is still at the very beginning of its approach to using Leoligin in cancer therapy. Some researchers suspect that it might inhibit the cell division of cancer cells. First investigations with leukaemia cell cultures have yielded promising results.

On the initiative of Astrid Thurner, the Alpine Flora Experience Trail from Somtgant to Mot Laritg above Savognin was created in the region. The Savognin mountain railway takes tourists to Somtgant station. Therefore the Chrütliwanderung is also suitable for young and old. Without ascent it goes over Mot Laritg to Lai Lung to a small lake with seats and a grill place. The theme trail is almost five kilometres long and runs through a colourful, fragrant sea of flowers. Around 130 information boards with photos explain the flowers, herbs and medicinal plants that occur. Part of the route is also accessible for wheelchairs or prams.