Share bull market: Is the extension coming into effect? 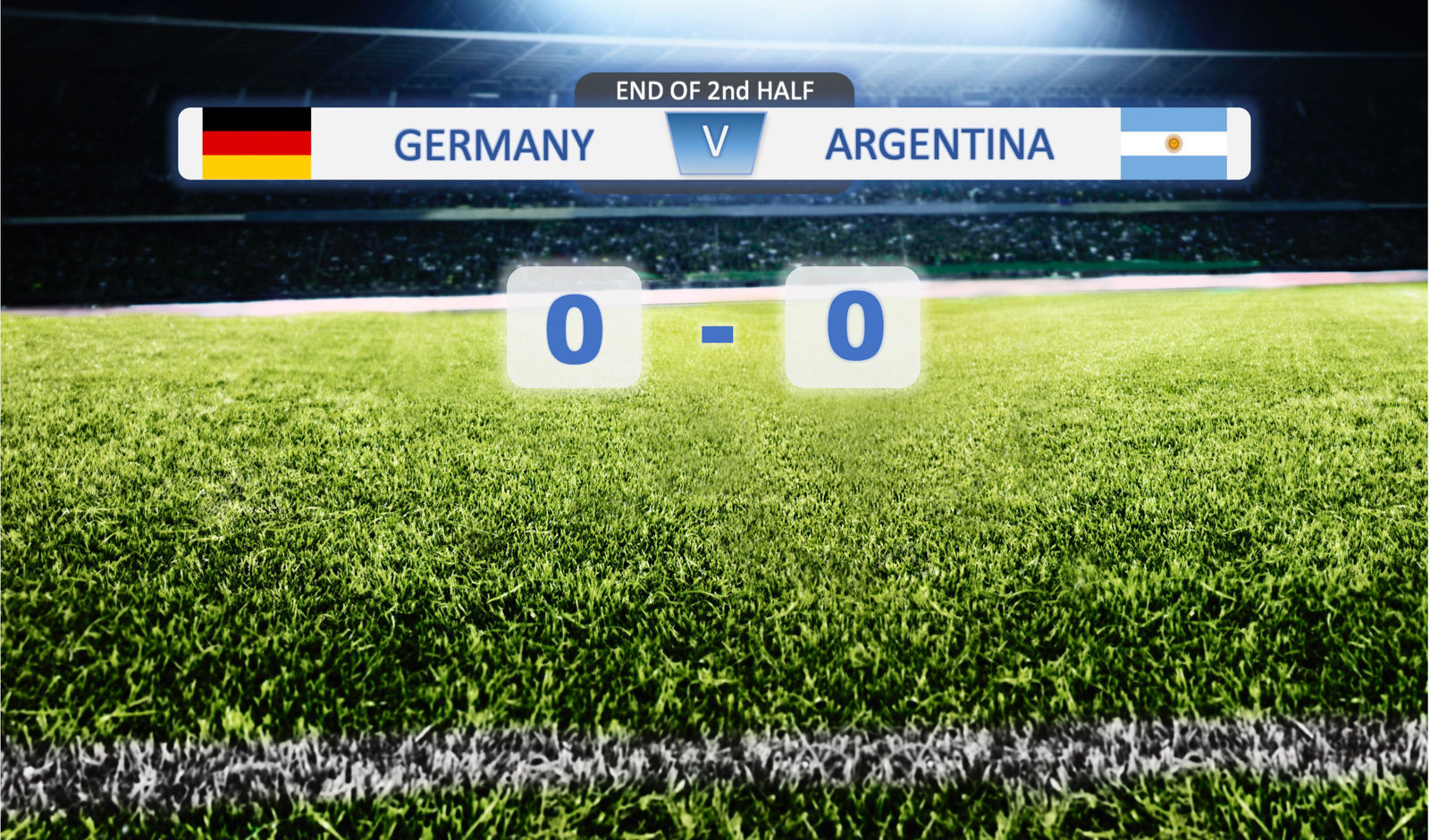 Stock trend. The current stock market boom has lasted almost ten years. Over the past five decades, there have been few bull markets with even better performance. Are the recent price declines signaling the beginning of the end of the stock market upswing? Timo Schwietering, capital market strategist in Private Banking at Bankhaus Metzler, has good reasons not to announce a turnaround yet.

Timo Schwietering has underlined this sentence in red. In 2007, shortly before the financial crisis, Citibank boss Chuck Prince caused a sensation by saying that investors had to dance as long as the music was playing.

"This statement perfectly illustrates how difficult the orderly withdrawal from the stock market is after a long bull market," explains the capital market strategist of Metzler Private Banking: "Either bulls end so abruptly that there is hardly any time to react, or investors say goodbye too early, and the bull runs much further than one would have thought possible.

Optimal timing, so Schwietering, is just an illusion. "Generations of investors learn again and again that it is simply not possible to get in 'below' and get out 'above'." The ideal exit time is always only recognizable ex post. "However, this frustrating realization should not be a reason to refrain from actively shaping the portfolio. Fortunately, even before the end of a bull market, it is possible to find indications of the degree of maturity of a stock market cycle." 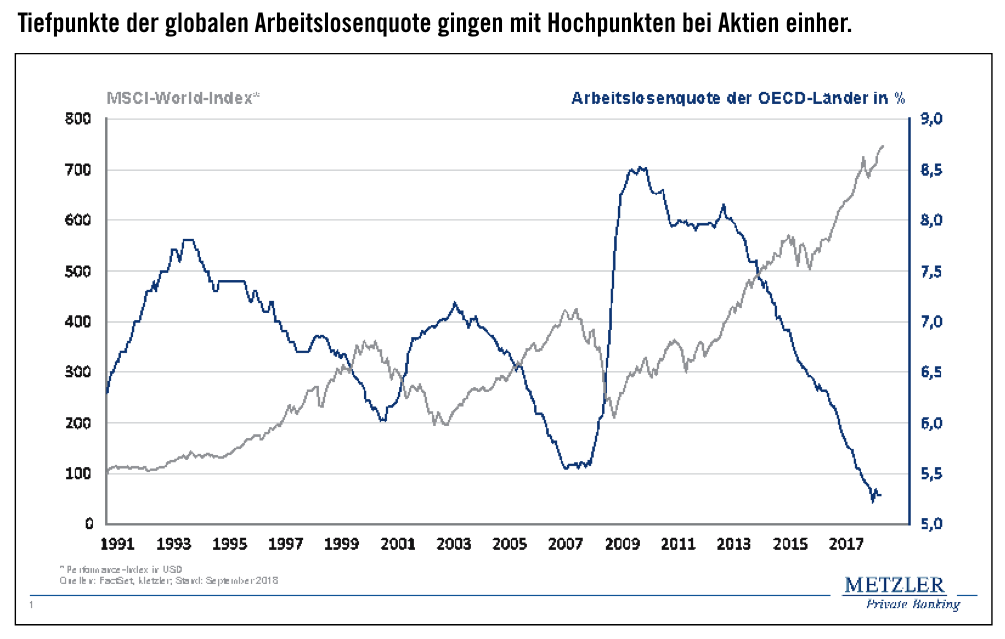 "The same is true today. And yet, of course, the current level makes you suspicious," explains the expert. The unemployment rate is currently only around 5.3 percent, even lower than its all-time low from 2007: "There is therefore much to suggest that the stock market cycle is at a very mature stage.

This does not rule out the possibility that share prices will recover and the unemployment rate will continue to fall. "At some point, however, the unemployment figures will be higher again - and by then at the latest the stock markets should also be in even more difficult waters."

After all, the unemployment rate is a function of the economic situation. If the general economic weather situation deteriorates, companies and thus also the stock markets will suffer. "This is why the most important question for us economists is always:  Wie Is it likely that the economy will deteriorate significantly in the coming months?

The USA still plays the most important role. As soon as the world's largest economy stumbles, Europe will feel the effects. As part of our economic and capital market analysis, we are therefore constantly asking ourselves whether there are any recession signals in the USA.

Schwietering, on the other hand, finds indications for and against this above all in five economic and capital market-related indicators, which in the past 50 years have demonstrably given the best indications of impending US recessions and local highs on the American stock market. 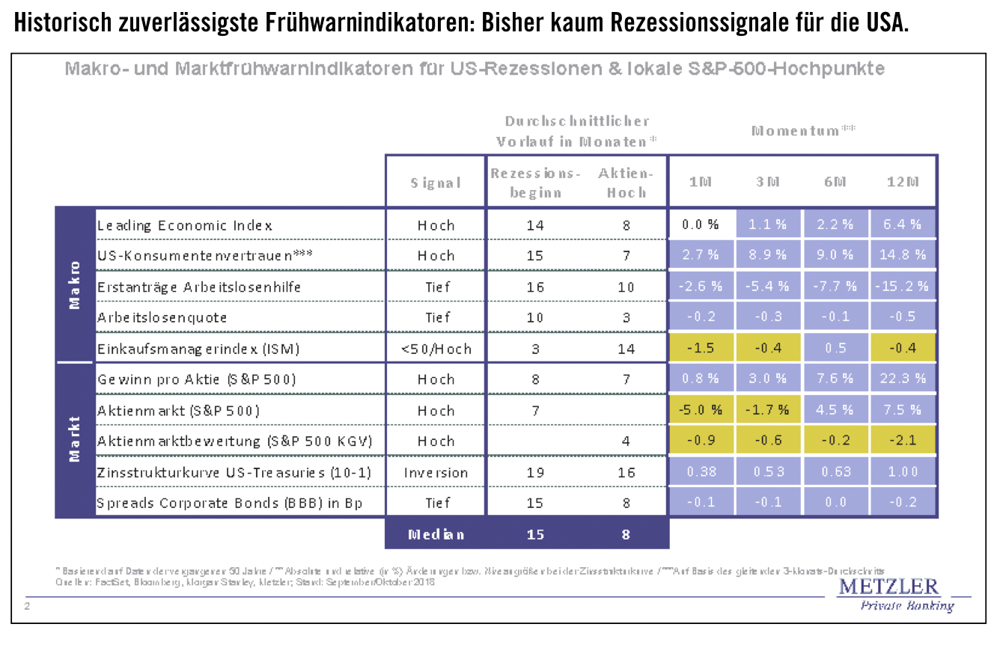 One of these indicators is the unemployment rate (fourth row), which sends a warning signal when it marks a low point. In the past 50 years, this low point was reached on average ten months before the start of the recession and three months before a peak on the stock market.

"However, as low points cannot be identified in advance, the current changes must always be observed. These are currently negative over a period of one, three, six and twelve months - so the unemployment rate is still falling continuously and there is no warning signal."

The other leading economic indicators are not yet sounding the alarm either: initial applications for unemployment benefits are falling; the Leading Economic Indicator - an index that summarizes variables such as new orders, delivery times and building permits - is rising. And consumer confidence, the result of a nationwide survey of 5000 representative households, is constantly improving. Only the purchasing managers' index - the result of a national survey of around 400 chief buyers in US industry - is showing a slight deterioration. The indicator is currently slightly below a 14-year high. "However, a serious warning signal would only be given if the index were to weaken significantly. Over the past five decades - with the exception of the 1973 oil price crisis - every US recession has been preceded by a decline in the purchasing managers' index to around 50 points. At the moment, however, the mood in the industry is still excellent." 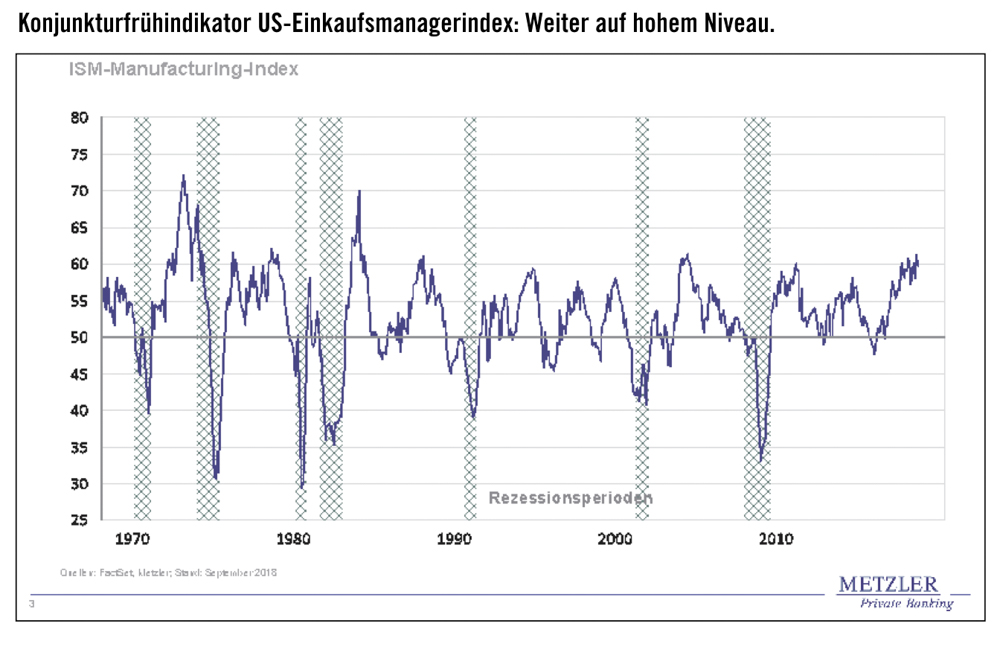 Capital market-related indicators, which also had good leading characteristics in the past, paint a similar picture. One of these indicators is the stock market itself. "The US stock index S&P 500 has also suffered significant losses in recent weeks. But I wouldn't overestimate that yet", meint Schwietering. Since the end of the Second World War, there has been an average stock market correction of at least five percent every two to three months in the USA. "And since the last period lasted seven months without a corresponding backstop, the latest sell-off didn't really come as a surprise."

Another warning signal would be a significant contraction in price-earnings ratios (P/E), as this could be a sign of falling investor confidence. "The P/Es of American stocks are falling. Before the recent price falls, however, this was mainly due to the fact that corporate profits rose faster than prices - and that is a more pleasant circumstance than a signal of recession."

Nevertheless, the steady decline in valuations could be a first indication of a high for US equities. "However, we believe it is premature to draw conclusions from this about an incipient bear market, as we lack confirmation from other indicators." And even if the fear were correct, a bear market would not be imminent. "US equities could also move sideways. This is supported by the fact that bear markets generally only occur in conjunction with recessions, but there is no fundamental evidence for the latter."

Even the credit markets, which typically react very sensitively to imminent trouble, do not yet send any warning signals. "It can therefore be said that almost all classic early warning indicators currently speak the same language: There is no threat of recession for the USA in the coming year", the expert from Bankhaus Metzler makes clear.

However, this does not mean that the task of investing in shares will be easy for investors. "On the contrary, the comfortable environment of recent years has led to the emergence of imbalances that now require increasing differentiation."

This was particularly evident in the area of corporate debt. Normally, in times of rising debt and credit risks, the shares of highly solvent companies are expected to perform better than those of less solvent companies. Quality counts.

In fact, this was usually the case in the past: both at the end of the 1990s and in the run-up to the 2008/2009 financial crisis, an increase in corporate debt was accompanied by an improvement in the price performance of first-class companies. "Since 2010, however, the relationship between relative solvency and leverage has hardly seemed to play a role," Schwietering explains.

Although the indebtedness of US corporations has more than doubled in the past eight years - measured by the ratio of net indebtedness to operating profit - there has been no sign of an improvement in the performance of highly solvent companies for a long time. It has only been about one and a half years since these companies have been able to make up ground against their less solvent counterparts.

"The long-standing decoupling between relative creditworthiness and indebtedness is probably primarily due to the fact that hardly any interest had to be paid on the high debts", the expert suspects. "If debt was incurred to buy back one's own shares with money, higher debt also directly stimulated prices."

With the Fed's turnaround on interest rates, this is now becoming increasingly difficult, and high debt levels are gradually having a negative impact again. "Equity investors should therefore - after eight very extraordinary years - pay more attention to the earnings and balance sheet quality of their investments. With the end of the liquidity glut, stock picking will once again come to the fore."

With regard to concrete portfolio construction, the question also arises as to which segments of the equity market currently appear to be particularly promising. 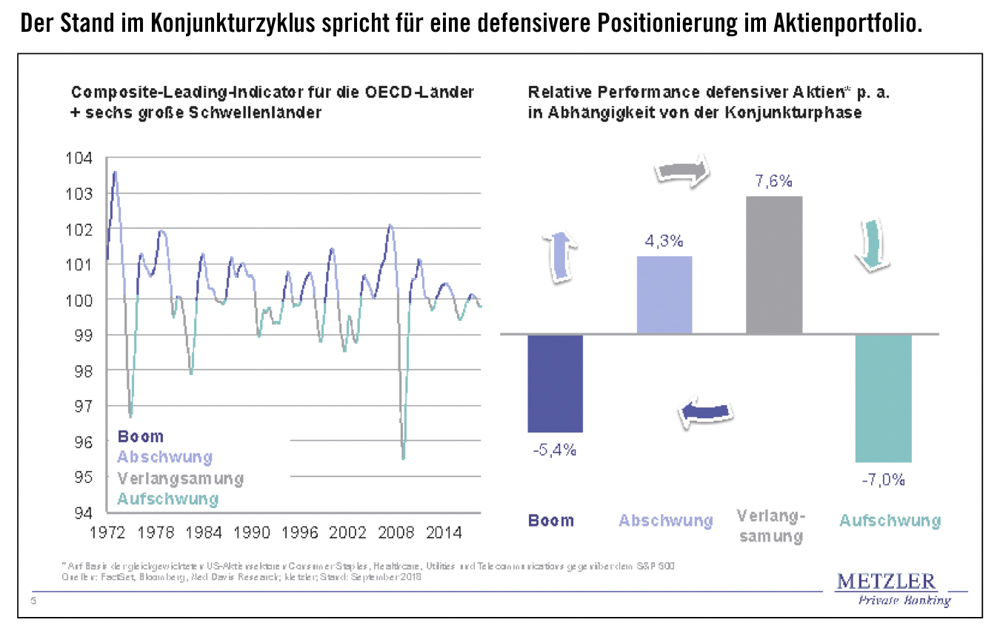 "Over the past two and a half years, investors have done quite well over long periods if their equity portfolios were overweighted in so-called cyclical sectors - i.e. in stocks from sectors such as industry, commodities, discretionary consumption and, of course, technology," explains the professional. Due to their economic dependency, these sectors benefited particularly strongly from the global upswing. Defensive sectors such as utilities, telecommunications and basic consumption, on the other hand, had a harder time. "This is typical of the phase that lies behind us." Finally, the global economic cycle goes through different stages, which last for different lengths of time, but are repeated over and over again. An economic boom must be followed at some point by a downturn, then by a slowdown in economic growth or a recession, and finally by an upturn.

In the past two and a half years, the upswing phases have dominated the global economy. "In the meantime, we've even barely reached the boom zone." In these phases - i.e. during the boom and upswing - it is generally advisable not to overweight defensive stocks. On average in all boom phases since 1972, defensive equities outperformed the overall market by an annualized 5.4 percent. During upswings, the underperformance was even greater at -7.0 per cent per annum.

In the downturn and the slowdown, on the other hand, the opposite is true: here, the less cyclical stocks stabilize the portfolio. As the global economy has recently lost some of its momentum and increasingly scarce capacities, rising interest rates and the ongoing Sino-American trade conflict all speak against a rapid acceleration of the global economy, Schwietering now considers it advisable to take a more cautious approach to investment policy. "In our equity portfolios, we have increased the weighting of defensive sectors at the expense of cyclical stocks in recent months. In addition, we have slightly reduced the investment ratio and - depending on the current market constellation - use classic hedging instruments. Overall, we are less optimistic than we were a year ago."

However, as 2019 is highly unlikely to be a recession year, Timo Schwietering does not currently see sufficient reasons to further reduce equity exposure. "Should opportunities present themselves through price declines, anticyclical purchases may even be indicated. So we keep dancing. Nur just with a little less speed. And much closer to the exit." ®

How to invest it Sonderveröffentlichung: Merck Finck Privatbankiers 28
Impact Investment. Investing money in a…

How to earn it Dr. Ludger Wess 26
Medical technology. People with donor organs must…

How to earn it Dr. Günter Kast 30
Start-up. The expansion of large wind turbines…

Opinionleader Prof. Maximilian Werkmüller 28
In the Corona crisis, the government has demanded…

How to earn it Cornelia Knust 28
Succession. The lighting designer Ingo Maurer…