Written by Klaus Meitinger on 30 September 2018. 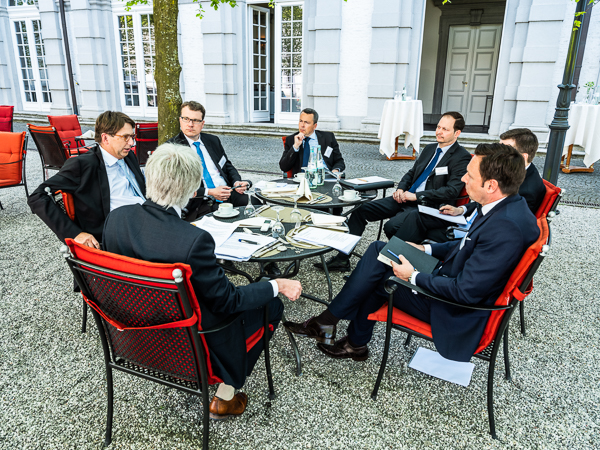 Business cycle. After the strong upswing of the past two years, global economic growth appears to have peaked. Is the crash following now? How likely is a recession? And how are the inflation rates, which are regarded as the decisive influencing factor for central bank policy, developing? The Lerbach Round takes a close look at the world of business from the investor's perspective.

"Even the most beautiful economic summer vent will come to an end at some point. Dann one must be prepared for the autumn." (Wolfgang Brüderle, politician of the FDP)

It's so easy to read in textbooks. The economic cycle describes a wave-like curve around langfristigen Wachstumstrend. During the economic boom there is an above-average demand for goods, the production capacities of the companies are fully utilised and there is full employment. Wages and salaries of employees are now rising. Inflation becomes an issue. And the interest is climbing. Entrepreneurs therefore earn less. They are becoming more pessimistic and are postponing investments. The downturn begins. Und ends in a recession.

In reality, this process is not so compelling. And above all, not so predictable.

"The last few years were characterized by a slow but tension-free upswing. The economic cycle seemed to be over," says Kai Röhrl, Head of Third Party Distribution at Robeco. Since the beginning of 2016, the global economy has experienced a significant acceleration in growth rates. Überall the world experienced an upswing. In some countries - zum Beispiel in Germany - economists then diagnosed a real boom in 2017. But for some months now a number of leading indicators have been pointing downwards. "This is why investors are getting nervous", erklärt Röhrl: "Is the classic economic cycle coming back now? Und is the next serious downturn threatening soon, including falling stock prices?"

In the past, the results of surveys conducted by the Munich-based ifo Institute on business expectations in German industry had proven to be particularly meaningful. Due to the companies' heavy reliance on exports, they are also regarded as a sensitive barometer for changes in the global economy. From December 2017 to April 2018, this indicator fell five times in a row. Such a series has existed in statistics since 1969 - as long as the ifo Institute conducts this survey - only 13 times. This was followed nine times by a more or less severe recession, i.e. several quarters of negative growth or zero growth. Growth slowed down three times. Only in autumn 2014 did the ifo indicator quickly reverse its upward trend and the economy continued to grow. Does the ifo indicator signal disaster again? Oder is everything different this time?

// 01. Does the crash of ifo business expectations indicate a serious risk of recession?

"The four words, this time everything is andersʻ are among the most expensive stock market wisdoms. For me, the survey results of the ifo Institute are a serious warning signal", macht Helmut Neumaier, FOCUS Asset Management, clear: "If expectations continue to deteriorate, entrepreneurs will obviously become more cautious. And then probably postpone investments. This in turn would have consequences that could amplify themselves. Business cycle is just 50 percent psychology. Something happened - and people who saw everything positive yesterday are now turning negative."

"There are more than enough potential triggers for this today," adds Daniel Oyen from Family Office Plettenberg, Conradt & Cie. "The trade dispute, the US withdrawal from the nuclear agreement with Iran, the conflicts in the Middle East, the fact that the US upturn has been going on for an extremely long time, a high level of indebtedness, which is now meeting with rising interest rates ... - a lot can happen there."

"Of course, there is always the risk of a downturn", reflects Reinhard Pfingsten, Bethmann Bank, "but that is not our baseline scenario. That's still positive." "Marc Vits, Bankhaus Metzler: "The ifo Institute asks, do you estimate the business expectation to be six months more favourable, constant or unfavourable? At the end of last year there were extremely high figures. A great many entrepreneurs had reported that things were getting better. Now, if a few of them say: It stays great, it can hardly get any better', then this indicator falls. It's pure mathematics. I don't see why global growth should not remain solid next year."

"Carsten Mumm, Donner & Reuschel, continues: "Donald Trump knows perfectly well that in a trade war everyone loses - including his voters. I therefore assume that there will be a negotiated solution." "In this case, we immediately see a counter-movement in the ifo index," assumes Reinhard Pfingsten, "because the order books are full and the underlying growth forces intact. The emerging markets have overcome their weak phase from 2014 to 2016 - by the way, the upswing there is still young. China is growing steadily. Japan's economy is accelerating again. And in Europe an acceleration bei Kreditvergabe and investment is visible. It won't stop that fast."

The experts are more worried - always assuming that geopolitical tensions dissolve - about a completely different point. "Classically, the current cycle still lacks the euphoria phase. Nun Donald Trump is once again really stepping on the gas with his tax reform, although growth in the USA is already so far above the long-term trend as it has not been for a long time. This is actually economic madness. I'm curious to see if this doesn't turn into a real overheating. Which will then lead 2019 or 2020 into the next recession", überlegt Daniel Oyen.

"In my view, the biggest risk factor is an increase in inflation expectations, combined with a surge in interest rates on bonds with longer maturities," explains Mumm. "In fact, the indebtedness of im Unternehmenssektor has risen significantly in the last one to two years, especially in the USA", confirms Neumaier, "this could then cause problems with refinancing". After the extremely long low-interest phase, many zombie companies are now on the move - companies that would no longer exist in a normal interest rate environment. "With every basis point that goes up on the bond market, one of these companies will drop out," predicts Mumm. "If interest rates rise faster, more companies will have to close in less time. If this happens too quickly, it would be quite a problem for the economy and the capital markets."

The Lerbach Round Table therefore discusses a second aspect at least as hotly as the question of the global growth perspective. What actually happens in the coming months with regard to inflation?

// 02. Wie Is the danger of inflation really great?

"The word danger implies that inflation is evil. When I review the discussion of the last four or five years, I had the feeling that moderate price increases were longed for in the face of deflation fears. The fact that the disinflationary tendencies have now subsided is positive," says Marc Vits.

The Lerbach Round currently sees a continuing trend towards higher prices in both the USA and Europe. Commodity prices are climbing and in many industrial nations - above all the USA and Germany - there are now massive shortages on the labour market. Das drives the wages. "In addition, consumption in China has now also picked up. Everyone can imagine what it means for raw material and goods prices when all 1.3 billion people there are also part of global growth", meint Röhrl: "For decades hat China exported as a cheap supplier for the world deflation. Künftig it will export inflation."

The exciting question remains: Wie prices are rising fast - and in their wake bond rates are rising? "A significantly higher interest rate level - say, three to five percent for US bonds with a ten-year maturity - would turn a lot of things upside down," meint Mumm, "then the valuations of equities and real estate would be just as questionable as refinancing in the corporate sector. The fact that US interest rates are currently already quoted at three percent underscores the explosive nature of the situation. "Not much can come there anymore", sagt Neumaier.

"Marc Vits reassures us that "the many opposing forces - digitalization, robotization, globalization - will continue to weigh on inflation. Although the good situation on the labor market in many industrialized countries is likely to lead to wage increases sooner or later, an excessively strong or rapid rise in inflation rates is nevertheless not to be expected." "Wage increases are not included in the inflation rate at zu eins," explains Pfingsten, "but this can also be absorbed by productivity. Or at the expense of margins."

// 03. Is inflation good or bad for company earnings?

"Ultimately, it is always decisive whether companies have scope for price increases," explains Helmut Neumaier: "Moderate inflation should initially have a positive effect on earnings. Only when the input costs climb too high and therefore investments are reduced will it become counterproductive." "The extent to which companies are exposed to international competition must also be taken into account," adds Pfingsten. "US companies with their large consumer-oriented domestic market behind them probably have it easier than Europeans - especially if protectionist tendencies are added now", meint Mumm. "And of course there are also positive and negative effects on the raw materials side," adds Daniel Oyen, "companies that extract raw materials win. Wer needs many raw materials, loses."

On balance, however, the round sees this aspect as relaxed. "It depends on the temporal component. If these changes are moderate and predictable, firms can react," Vits concludes, "then the overall effect on corporate profits is not bad.

The conclusion of the Lerbach Round: the current economic weakness is mostly regarded as a dent in the upward trend. Next year, real growth will probably be a little weaker. Because prices are rising more strongly, nominal rates should then remain roughly the same. Experts estimate the danger of recession to be between ten and 15 percent. Helmut Neumaier points out, however, that every downturn begins with a dent.

// 04. What does this real economic world view mean for the investment strategy of wealthy private individuals?

"Kai Röhrl sums it up as follows: "More cash, fewer bonds, continuing to focus on equities and building a few 'alternatives'. "However, investors should always bear in mind that we are in the late phase of the economic and stock market cycle," adds Helmut Neumaier. "It is important to monitor early indicators, geopolitics and protectionism closely and keep a finger on the trigger. Should the situation there deteriorate further, I would downshift several gears relatively quickly."

Daniel Oyen points to another indicator that has served investors well in the past: "The development of the interest rate structure - the ratio of bond yields with a residual maturity of zwei Jahren im Vergleich to ten-year securities. If the short-runners pay higher, we speak of an inverse interest rate structure, a recession usually follows with a delay of six to twelve months. At the moment, the interest rate structure is not inverted yet, but we are taking big steps in this direction." According to Oyen, it is therefore important to remain flexible in order to be able to act quickly if the worst comes to the worst. "When it comes to illiquid investments that are difficult to sell, I'm increasingly cautious."

"This is one of the reasons why the following still applies at present: "Equities are the most attractive asset class", Carsten Mumm makes it clear, "this is particularly important for risk-sensitive investors. Only with shares do investors have the chance to generate a positive real return. Im Interest rate range the mit Sicherheit turns out negative."

"I advise investors to double their thinking", schließt Reinhard Pfingsten: "First: Slightly rising interest rates - which we will definitely see - are not bad, but good for equities. And secondly, volatility is not a risk, but an opportunity. Next year, the markets are likely to oscillate between the extremes of fear of recession and fear of inflation. That can be used." ® 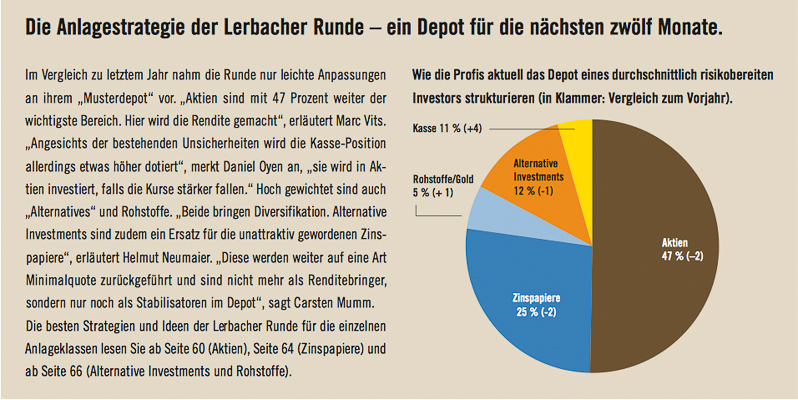