Written by Klaus Meitinger on 30 September 2018.

Dangers? Where are the dangers? 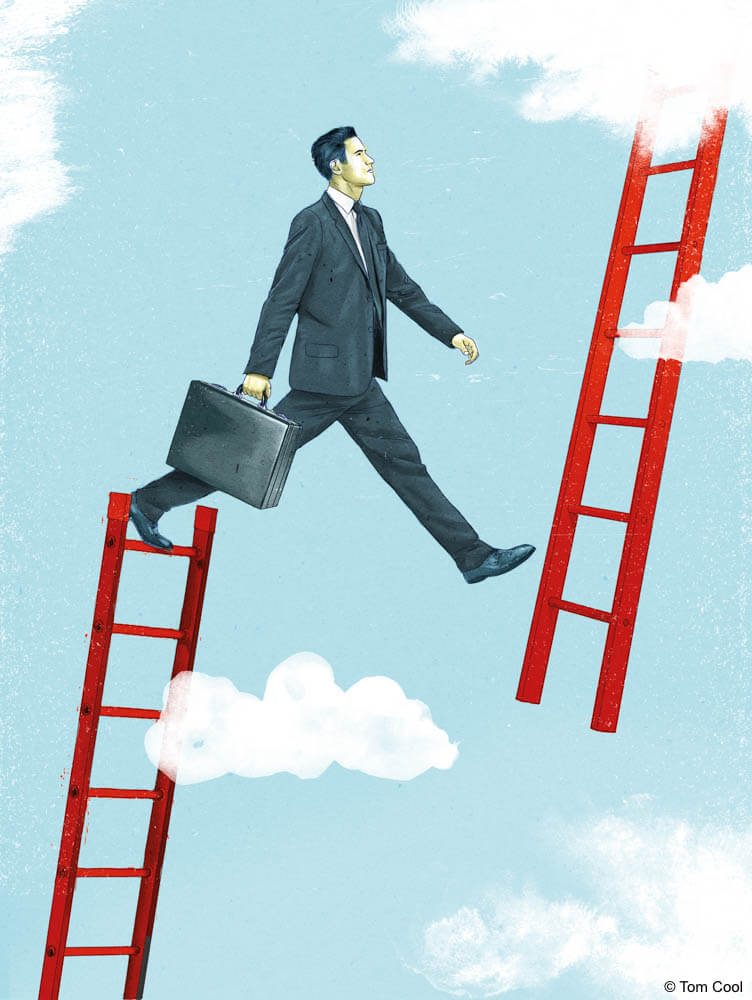 Stock markets. The world economy is booming. Corporate profits are bubbling up. Interest rates are low. And the stock markets are celebrating records. Investors currently obviously live in the best of all worlds. Can it stay that way? Or are there hidden dangers? Experience shows that when superlatives are the order of the day, it is high time to talk about the risks.

Summer fairy tale. In 2007, the mood was better than ever. From 2003 to 2006, the world's social product rose by an average of 4.9 percent per year. And in its outlook, the International Monetary Fund (IMF) promised a brilliant continuation. In 2007 and 2008, real growth of 4.9 percent should again be possible. Six growth years in a row with rates of five percent. And still no inflation. It's never been done before. The central banks had obviously defeated the economic cycle. Stock price gains in the three-digit range seemed quite appropriate. After all, investors lived in the best of all worlds. Half a year later the fairy tale was over.

A little more than ten years after the legendary summer of 2007, the superlative reigns again.

The climate for the world economy calculated by the Munich-based ifo Institute recently rose to its highest level since the second quarter of 2011. In the USA, the economy has been running for nine years now. Only once in the past 100 years has an upswing there lasted longer. Sentiment in the euro zone as a whole is improving significantly. And the ifo economic climate in Germany is even reaching a new all-time high. There has only been such a synchronous upward movement at auf Quartalsbasis four times since 1980, writes the banking house M.M. Warburg, for example. It's boom time.

At the same time, inflation rates remain below the two percent mark set by the central banks. Sie therefore see no reason to end their expansive monetary policy. Once again, investors in the stock markets live in the best of all worlds, for which there is even an appropriate acronym: NICE - Non-Inflationary Continuous Expansion.

Correspondingly "nice" was the income to den Aktienmärkten. In the long term, they should actually generate an average of between seven and eight percent per annum, because earnings and dividends will also increase at this rate in the long term. However, the balance sheet since the end of the financial crisis in spring 2009 shows gains of between 250 and 530 percent, depending on the index. Investors have thus earned many times what they would actually be entitled to, measured against the long-term average.

Now the comparison with the lows may be somewhat unfair. It is therefore also interesting to compare them with the high prices of 2007, which a short time later were described as an exaggeration.

Today, the DAX is 75 percent above this level, the S&P 500 already 85 percent, the MDAX 170 percent, the TecDAX and the US technology index Nasdaq 100 even a proud 200 Prozent above it. A "normal" stock return of seven percent per year would push the indices in zehn Jahren up by 95 percent. The DAX and S&P 500 are therefore almost as "expensive" today as they were in the boom ten years ago. And the other indices have meanwhile left the exaggerated level of 2007 far behind.

"We are experiencing a classic stock market cycle - upswing, boom, euphoria," concludes Hans-Peter Schupp, CEO of the Fidecum fund manufactory, "and after eight years of bull market, we are definitely in its final phase."

The legendary economic historian Charles P. Kindleberger described how this cycle runs ideally before 40 Jahren. It all starts with a turnaround, which suddenly improves expectations at von Investoren . This could be the end of a war or an economic and financial crisis. In the next phase a rethinking begins, promoted by technologies, innovations or simply more liquidity. Money is now being earned again on the stock market. In the third phase, the boom, gets a convincing story very broad approval - "the Internet changed everything", "real estate prices can not fall", "shares are alternative", "the future of the world economy ist NICE".

Rising prices confirm the plausibility of the idea. If everyone is convinced of this, the euphoria phase begins. Now we act with higher risk and auf Kredit. merkt Kindleberger states that there is nothing that disturbs well-being and judgment more than seeing a friend get rich. Everybody wants to be there. Der collective madness begins.

Phase four, the crisis, begins when a critical number of investors have doubts about the valuations they have achieved and start selling. Despite good news, share prices are no longer rising. Fear replaces greed, suddenly ever more investors push into Richtung Ausgang. Doch it's gonna be damn tight. Die courses fall. Der Einsatz von Fremdkapital breaks to some the neck and brings creditors - usually banks - into emergency. The number of bankruptcies increases, scapegoats are sought and found, fraudsters exposed. The quotations overshoot downward. Ein new cycle begins. "So it will go out also this time again , ist Schupp convinced. "For me, therefore, the crucial question is where exactly we are at the moment."

In any case, the basic story is already widespread. Because there is no alternative to equities, many investors have now restructured their portfolios. And the fact that NICE, the sustained upswing combined with low inflation and very low interest rates, justifies a higher valuation of equities is also in line with the majority opinion.

In the coming months, this narrative could receive further confirmation. "Especially in Europe, corporate earnings are only now beginning to rise more strongly," analyses Schupp, "at the same time we do not yet see any significant rise in inflation rates. That's why the central banks are taking Fuß off the gas very, very slowly, if at all."

In the meantime, however, behavioural patterns can also be recognized that characterized earlier phases of euphoria. Investors kaufen Bitcoin, just because the price rises - without knowing how the whole thing works in detail. Shares of companies that add the terms Blockchain or Bitcoin to their business purpose rise significantly. Ähnliches had happened in 1999 with the abbreviation ".net". "On balance I would say: We are somewhere between boom and euphoria", Schupp concludes.

This was often the most exciting phase for investors. Often the prices in the closing chapter of the cycle are once again catapulted massively upwards. This demands a lot from the adviser. "The scope for mistakes in the assessment of the markets is now getting smaller and smaller," Schupp weighs up: "But selling everything now is not a good idea either."

Schupp advises to observe closely whether anything changes in the overriding narrative. The economy is currently the least of our concerns. Sämtliche traditional leading indicators signal an acceleration of the upswing.

It could therefore become more critical in terms of inflation. "The labour markets in the USA and Germany are already strained. In terms of capacity utilization worldwide, we are now entering regions where wage and price increases were expected in the past," says Schupp.

Doing what? "At the end of a stock market cycle, it was always right to slowly reduce the stock position at an early stage. After all, we have earned far more than average - why not reduce our equity quotas now and then gradually reduce them further as prices rise," advises the expert. The ersten Kandidaten are the defensive, high-dividend stocks whose valuations have risen extremely." "Seemingly secure papers are the most risky. Many investors are invested there who actually don't want any shares at all. You'll be the first to get cold feet."

Reasonable or crazy? Warum the stock markets are so highly valued today.

Isra Vision is a very successful company. Thanks to innovative technologies in the field of surface inspection of web materials and 3D applications, sales and earnings per share have risen by around 70 percent since 2012. What about the stock price? In the last fünf Jahren, it not only climbed by a similar percentage - but from 22 to 158 euros. An increase of 618 percent.

Of course, this is a particularly spectacular example. Es illustrates very well why the stock markets in letzten Jahren have risen so much - investors have accepted a much higher valuation (in the case of Isra Vision, the price-earnings ratio has even quadrupled). Besonders, this trend was pronounced in the USA, im Technologiesektor and also in defensive shares with high dividends, which were discovered as bond replacements.

Why is it that yields are paid once with the ninefold and a short time later with the 36-fold?

Theoretically, share prices correspond to the present value of expected future income streams. This, in turn, depends primarily on the discount factor used. With falling interest rates, the present value rises dramatically. And this is expressed in higher price-earnings ratios.

In practice, Jeremy Grantham analyses vom US-Investmenthaus GMO, the level of price-earnings ratios is also dependent on how well investors feel at the moment. Diesen "Feelgood factor" determines three variables: the profit margin, the inflation rate and the stability of economic growth (not its absolute level). The higher the margins, the lower and more stable the inflation rate and the less volatile the economic growth, the higher the price-earnings ratio.

In fact, Grantham calculates, the development of P/Es on the US equity market over the past 92 years has correlated very strongly with the "feelgood factor". This explains the high current valuation in the USA. Die Margins are at record levels in the USA, the inflation rate is low and stable. Und the fluctuations beim Wirtschaftswachstum are as small as seldom. According to Grantham, high P/Es and high share prices are therefore no surprise. Ein Rückgang can only be expected in the event of a sustained reduction in margins and/or a sustained rise in inflation rates.

The analysis by Terry Riley, chief strategist of the investment boutique F&V Capital Management (chart below), also shows a strong correlation between the P/E ratio and the inflation trend. "Many investors believe that equities offer protection against inflation. In fact, stock markets hate inflation. The lower the rate of price increase, the higher the P/E ratio," explains the US analyst, "which is why the S&P 500 US share index is not too high today, but fairly valued. This also applies to all other stock exchanges.

Consequence: Die high rating is quite understandable in view of the current economic situation. Everything is fine as long as the economy continues to run, inflation is under control and interest rates therefore remain low. If this changes at some point, investors will have a problem. "But I don't see any risk for it in 2018," says Terry Riley, "but maybe in 2019 the cards will be shuffled again."