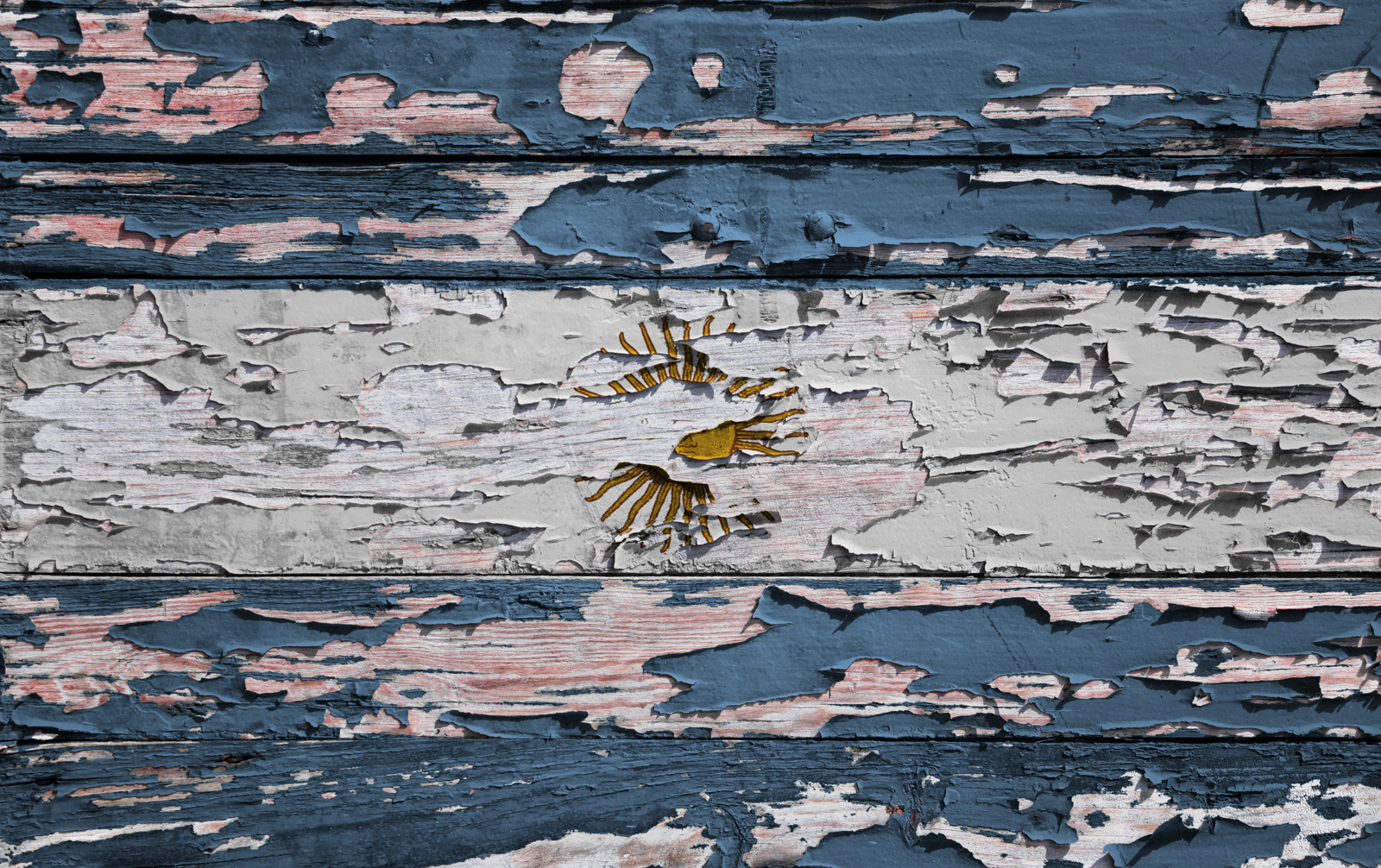 Investment strategy. The stock market is an indicator of the value of an economy. If this is halved within a year, something serious must have happened. For the third time since the year 2000, Argentina is on the verge of bankruptcy. This was followed twice by a brilliant upswing with price gains for investors of between 300 and 600 percent. Can what worked twice work a third time?

When blood flows through the streets, Baron Rothschild is said to have once said that it is necessary to invest in the future.

Today, the Baron might be interested in Argentina. The country at the bottom left of the world map is in a deep recession. According to a forecast by the International Monetary Fund, the economy is expected to shrink by 2.6 percent this year. Next year by another 1.6 percent. The inflation rate is 45 percent. And the peso has lost 50 percent against the US dollar since the beginning of the year. All those who have taken out dollar loans now have a serious problem. You'll have to pay back twice as much in peso.

The situation seems hopeless. Accordingly, Argentina's share index has more than halved in dollar terms. Today, all companies together are worth only half as much as at the beginning of the year. An Occasion? "Argentina experienced two similar crises after the turn of the millennium - and overcame them. In a short time, the stock market brought European investors between 300 and 500 percent profit," says André Kunze of asset manager Prometheus Asset Management. Can this be repeated?

At the beginning of this millennium, Argentina experienced one of its worst crises. The country's economy shrank by 4.4 percent in 2001, and in the following year the decline was as high as almost eleven percent. In December 2001, the newly elected President Eduardo Duhalde had to announce national bankruptcy. He also cancelled the Argentine peso's one-to-one peg to the US dollar.

The currency markets reacted relentlessly. The peso immediately lost two thirds of its value. "In an economy, currencies act like a pressure valve through which accumulated imbalances are discharged and reduced," explains Matthias Siller, emerging market expert at investment house Barings. The Argentinean stock index fell from over 200 to 77.5 points in dollar terms.

President Duhalde reacted with tough restructuring measures and gradually got the country's economy back on track. In 2003, growth was already at almost nine percent again. At the end of 2003, the share index in dollars was already trading at 435 points again. This corresponds to an increase by a factor of 5.6.

In 2012, the country went downhill again. The global economy cooled down and Argentina plunged into recession in the following year after growth of 8.4 percent in 2011. Again, investors fled the country in droves. The peso collapsed and the inflation rate rose to around 30 percent. And the stock index halved. 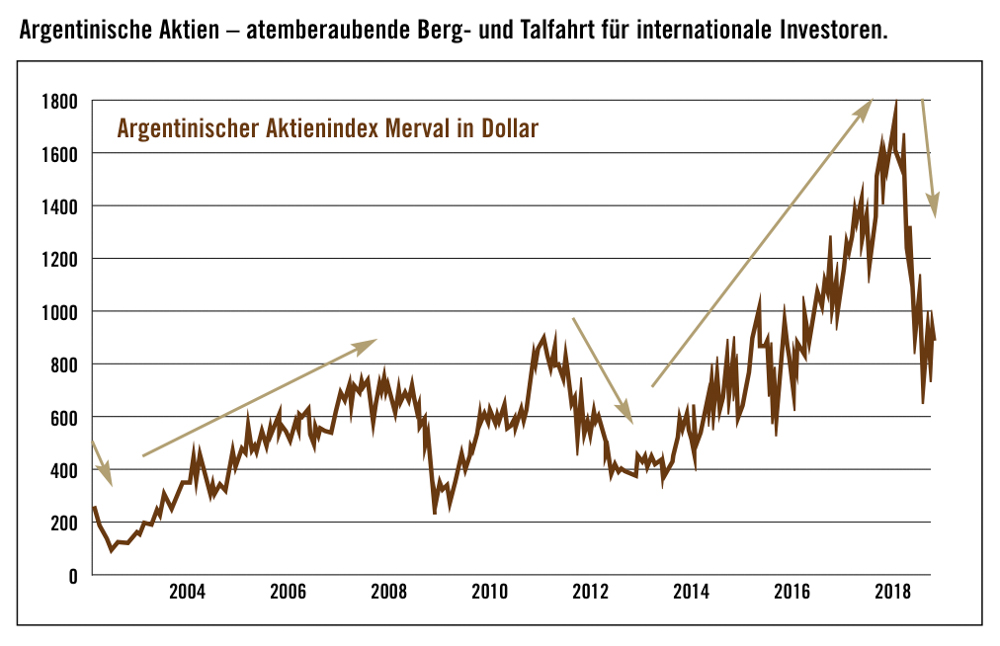 This time the government concentrated on boosting the domestic economy through subsidies, high export taxes and exchange controls. This succeeded - in 2015 the economy grew again by 2.7 percent. In particular, the election of Mauricio Macri as new president at the end of 2015 strengthened investor confidence in the country. Between 2013 and early 2018, the share index climbed in dollar terms from 400 to 1800 points - international investors were again able to realize enormous gains, this time 350 percent.

"Such roller coaster rides are not so untypical for emerging markets," makes Ilan Furman, emerging market expert at Columbia Threadneedle, clear. "The starting point is usually an excessive government borrowing in foreign currency to finance fiscal programs with simultaneously low foreign exchange reserves and a high current account or budget deficit. The mountain of debt is growing, inflation rates are rising and at some point the markets become nervous and doubt that the country can still finance these debts." As a result, international capital is fleeing, which is reflected in a massive devaluation of the currency.

But such a development does not continue indefinitely. On the one hand, politicians are forced to take countermeasures at a certain point. "If the population is too badly off, if unemployment rises and prosperity falls, this is also a danger for the political leadership. That's why politicians will always try to improve the situation at some point with appropriate measures," says Siller. It could adopt an austerity course, promote investment through tax incentives or combat inflation through a tight and disciplined monetary policy.

On the other hand, the drastic devaluation also often acts as a self-healing mechanism. Imports become more expensive and decline, exports become cheaper and increase, since the own products become much more competitive on the world market. "This helps combat current account deficits," explains Siller. "After some time, the economy and the currency stabilize, the earnings prospects of companies improve because they profit from the still cheap currency, confidence is restored and investors return. At this moment, stock prices are starting to rise.

Could history repeat itself in Argentina for the third time? "Basically, I think this could be possible," Furman makes clear. "However, there are hardly any interesting export companies in Argentina. That's why this classic mechanism doesn't work so well," says Kunze. "Rather, the investment universe there consists primarily of banks, utilities and other companies that are focused on the domestic market. For this reason, it is extremely important for the domestic economy to get going again."

It's not that simple, though. President Macri took office in 2015 to make Argentina a normal country. His agenda included liberalisation and the opening of the economy. But structural problems such as high government spending remained. They were apparently against influential interest groups not to lower.

It also turned out to be a Pyrrhic victory that under the new president Argentina became viable again on the international capital markets and was even able to place a hundred-year bond. The debt increased as a result. When, in an environment of rising US interest rates, foreign investors began to lose confidence again, the peso collapsed again. The prices of imported goods climbed dramatically, the inflation rate shot above 40 percent. For the third time Argentina is facing the abyss.

This time the Latin Americans are seeking help from the International Monetary Fund. In fact, the IMF has now agreed to a $50 billion aid package. However, this is subject to conditions.

"The government must deliver a balanced budget next year," explains Furman. But more is needed to restore investor confidence. "On the one hand, political continuity is needed. Presidential elections are scheduled for October 2019 in Argentina. If Macri gains and the economic situation stabilizes until then, the upside potential in the Argentine market can be quite substantial," Furman said. "Finally, you have to bear in mind that for many years there has been little investment in Argentina because of the many crises we have seen there since the turn of the millennium. There's a lot of catching up to do." ®

The last will be the first.

André Kunze of asset manager Prometheus Asset Management pursues an exceptional investment approach. At the end of each year, he designs the Recovery Opportunities Index, or ROX for short (private wealth reported in issue 04/2015), in which he combines the 15 equity indices that performed worst in the past year with an equal weighting. The long-term development was very promising. Since 2000, the index has risen by 300 percent, while the MSCI World has only increased by about 100 percent over the same period.

Turkey could currently be an interesting candidate from emerging countries for this approach. The MSCI Turkey, calculated in dollars, has been minus 45 percent since the beginning of the year. The main reason for this - similar to Argentina - was a collapse of the domestic currency. "However, the Turkish stock market will not really gain momentum until the earnings prospects of companies improve noticeably," says Matthias Siller von Barings.

The expert went on to say that a number of prerequisites had to be fulfilled for this. "The central bank must maintain its restrictive monetary policy in order to bring inflation under control. At the same time, the government must provide the right incentives, for example through tax cuts, so that more investment can again come from the private sector. If this is the case, I see a good chance that the central bank will be able to cut interest rates again in the course of next year". This would be a good time to take a closer look at the Turkish stock market again. "If, due to lower interest rates, consumption were to increase as well, we would have an ideal environment for companies," concludes Siller.

In fact, Turkey is currently also part of the ROX, the composition of which is being reviewed on an ongoing and systematic basis. From the emerging markets, the index currently also includes Brazil, Mexico, Poland, Russia, the Czech Republic and Hungary as well as Bangladesh, China, Indonesia, Malaysia and Pakistan from Asia. "The fact that Argentina is not included is due to the systematics of the selection process," explains Kunze. "Here the downward trend only began in the course of this year, while the share index has still performed very well in recent years. It is therefore possible that the Merval will become a candidate for the ROX next year.