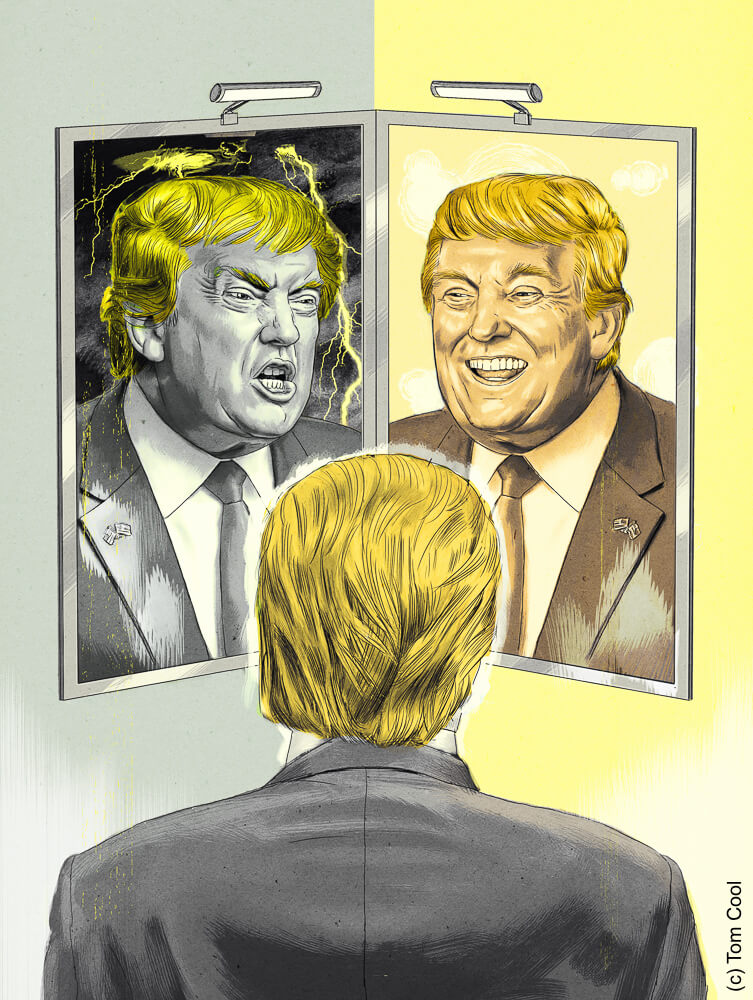 What will really change in the World Concert under a US President Donald J. Trump? Seit of the election, countless scientists, economists, analysts and political scientists have commented - private wealth summarizes their opinions.

In the Anglo-Saxon world, there is a hübschen Spruch if a person is to concretize their position or reveal their true character: "Will the real Donald Trump please stand up."

Before the US election, commentators outbid each other with negative forecasts in case Trump won. After the election - also under the impression of rising share prices - everything doesn't seem quite so bad anymore. This is of course associated with the expectation that the true Donald Trump would differ significantly vom Wahlkämpfer Trump. Or at least be slowed down by his republican party friends in Congress. "This, however, is pure hope", meint Markus Kaim, Stiftung Wissenschaft und Politik: "In view of the majorities in Congress, Trump will be able to govern in the next two years. That he can be restrained in the process is reine Spekulation."

Donald Trump has formulated the goal crystal clear: "America first", America first. The domestic economy is to be strengthened and foreign competition weakened.

// Economic policy: At the heart of the plan to make America great again is a massive fiscal policy programme. Infrastructure investments of 550 Milliarden Dollar and higher defense spending - 40 billion annually - are on the agenda. The reduction of the top tax rate from 39.6 to 33 percent is intended to boost consumption. The reduction in corporate taxes from 35 to 15 percent is intended to stimulate investment and provide an incentive for US multinationals to bring their capital back to the USA from abroad. Zusätzliche The dismantling of regulation should provide impetus. Economists estimate the growth effect to be between 0.5 and 1 percentage point over the next two years.

That sounds good, but it's got several hooks. If the tax plans are implemented, tax revenues in relation to economic output will fall to their lowest level since the Second World War. A simultaneous increase in government spending can then only have one consequence: The already high national debt will continue to rise. Can you do that?

It is also critical that fiscal policy is stepping on the gas at a time when the US economy is picking up anyway. The unemployment rate is low at 4.9 percent, hourly wages are already rising at an annual rate of 2.8 percent. This increases the likelihood of higher inflation rates. Investors reacted accordingly on the capital markets. Die Prices von US bonds have fallen, interest rates have risen.

According to the augurs, the reaction of the US Federal Reserve will now be interesting. More growth and higher inflation are also demanding higher key interest rates at im Verlauf in 2017. According to commentators, they could reach a level between 1.5 and 2.25 percent by the end of 2018.

This combination of loose fiscal policy and tighter monetary policy has always led to a stronger currency - a plus for the dollar.

A tug-of-war between the negative effect of higher interest rates and the positive effect of rising earnings can then be expected on the US equity market. Als Favorites are financial stocks, cyclical industrial companies, commodity sensitive sectors and construction. The losers would be the defensive sectors, which have experienced a massive valuation premium in recent years thanks to their steadily rising dividends - difficult times for the Nestlés and Co. A special situation arises at im Gesundheitssektor. Je further Trump the health reform Obamas turns back, the more difficult it becomes for shares of Gesundheitsdienstleistern, medicine equipment manufacturers and hospitals.

// Trade policy: Im Wahlkampf Donald Trump has clearly positioned himself against free trade. He promised to renegotiate the North American Free Trade Agreement NAFTA from the transpacific partnership TPP zurückzuziehen and to brand China as a "currency manipulator". If China does not stop its illegal activities, it wants to introduce import duties. TTIP will also not exist in its current form. Thus, the commentators conclude, the entire free trade policy achievements of the last 25 years would be destroyed. The effects on growth would be clearly negative. The extent depends on whether and to what extent affected countries - especially China - take trade retaliatory measures.

To implement this program therefore sounds absurd at first. From the point of view of America First, however, it is not completely absurd. Denn The USA generates only 13 percent of its national product from exports. It is interesting to note that the US inflation rate will then continue to rise as import prices climb. On the capital markets, the fear issue of stagflation - stagnation and inflation - would emerge. The prices von Aktien and bonds would fall, the FED would initially raise the key interest rate more strongly. The biggest losers would be export-oriented emerging markets, especially Mexico, Taiwan and Korea.

Conclusion: All experts agree on one point. Uncertainty will remain high in the coming months. On balance, however, the majority is hoping for a kind of "trump light" - a president who courageously boosts the economy, but who acts with prudence and caution in trade policy.

The fact that the new US president has always presented himself as a tough doer speaks against this. At first, no one expected Donald Trump to become a candidate for dass Then no one believed they could win the election. Und now no one expects that he will implement his plans. But the real Donald Trump is probably Donald Trump.