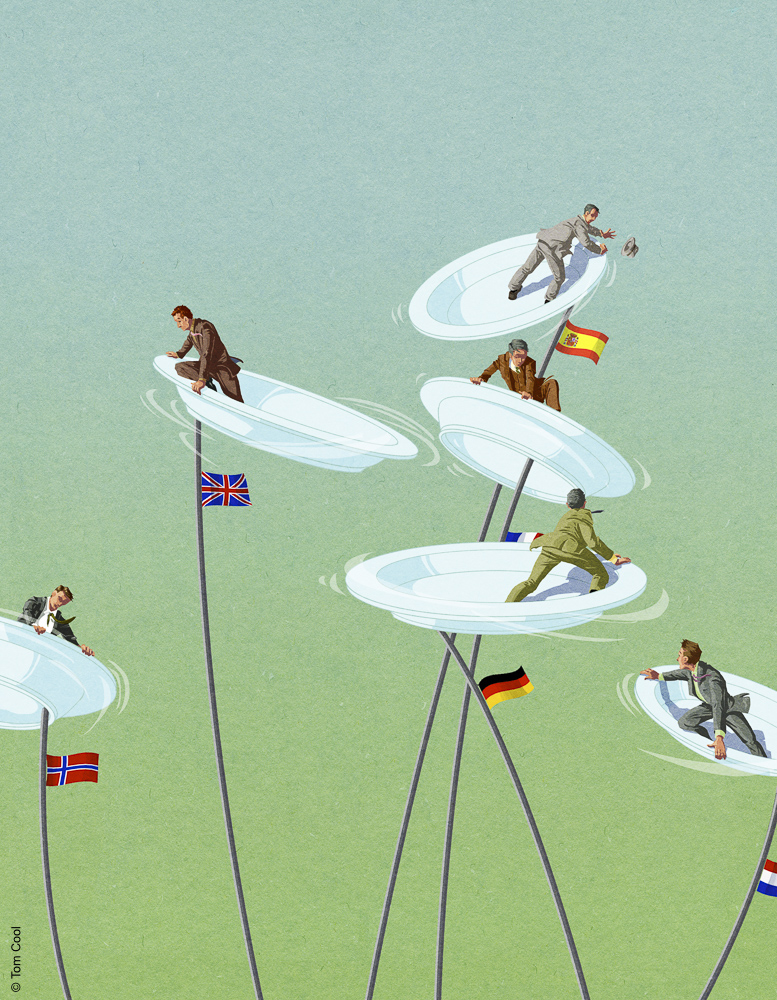 Refugee crisis, IS, Ukraine, Brexit - we are living in a time of crisis in geopolitics. Markus Kaim, Stiftung Wissenschaft und Politik, explains why this will continue to be the case in the future.

Even earlier generations did not live on the island of the blessed. And yet there is a remarkable difference between yesterday and today. The established orders with which we were politically socialized have become fragile. Above all, however, these introduced orders have not (yet) been replaced by new order systems. So we're living in some kind of interim.

{mprestriction ids="*"} Ten years ago we all still thought that the unilateral world order with the undisputed leading position of the USA would be replaced by a multipolar system. Um the USA, Russia, China and Europe would all group together. Today it is clear that we are on the way to a non-polar order in which there are no dominant powers. If, however, no one ensures order any more, a strategic vacuum is created that other players fill. We should be prepared for seven lines of development:

// 01. withdrawal of the USA aus of the global leadership role.

President Obama has changed the priorities of the United States. It is now about "nation building at home" - about rebuilding the nation. US foreign policy emphasises what the USA no longer wants - war in Iraq or Afghanistan. Die is primarily directed towards Asia in response to China's rise to power. This goes hand in hand with less involvement in Europe and other parts of the world. This picture will not change even after the US presidential elections. None of the candidates pursue an internationally activist agenda. On the contrary.

The Euro-Atlantic security order is based on the Paris Consensus. All European states and all OSCE countries have committed themselves to certain principles of interstate relations - territorial integrity, no use of force, protection of human rights, democracy. With the Russian annexation of the Crimea, it is questionable whether this order still applies at all. What is important for us is that Germany is not a military power. Only im Rahmen can influence a functioning international order. The more this order is questioned, the weaker Germany's position becomes.

// 03. The boundaries of international organizations.

Der Einfluss of NATO, EU or the UN is decreasing in view of changed priorities of its members. However, because there are still crises and conflicts, informal formats are formed. Examples are the G5+1 group in which the agreement on the Iran programme was negotiated. Or the "four star" Germany, Frankreich, Ukraine and Russia, which tried to solve the Ukrainian crisis. This has not yet foreseeable consequences for the established international security policy organizations.

// 04 The crisis in the European integration process.

The European narrative with which we all grew up - the EU as a question of war and peace - no longer convinces anyone today. There have been attempts to place here the importance and role of the EU in a globalised world. But that doesn't have any effect yet. On the other hand, the perseverance of the nation state is greater than expected. We assumed that the further deepening of European integration would eventually create a kind of European identity. That at the end of the day German or French politics would be replaced by European demos. But in the current crisis of accumulation, people seek their salvation in the nation state. The basic trend in Europe at the moment is anti-integrationist and anti-globalist. If you want to lose an election in a smashing way, plead for a deepening of the EU.

Today we are further away than ever from political union. Not all EU countries are in the euro zone. Not everyone participates in the common foreign and security policy. This tendency will accelerate and intensify - with or without the Brexit.

In future, we will talk about a completely different model of European integration. The minimum consensus of all 28 EU member states will lie in the free trade area and the free movement of persons. Depending on the political field, there will be various, different clubs. The best that the EU can achieve is to maintain its level of development. And of course the future of the euro will then be open.

// 05. The emergence of new destabilizing conflicts.

The topic IS wird will be of even greater interest to us in the coming years than in the past. The IS is a hybrid. It is a quasi-state - with state territory, state territory, state government. Er performs quasi-governmental functions, supplies electricity, collects taxes. But he's also a terrorist organization. The IS is thus questioning the order in the Middle East that has been in force for 100 years. We do not know what form Syria or Iraq will take. And what consequences this will have for the entire geopolitical structure in the Middle East. The only thing we know is that these problems cannot be solved quickly.

// 06. The renaissance of nuclear weapons.

The nuclear arsenals will no longer be disarmed, but modernized. The calmness with which the representatives of the Russian government recently threatened the use of nuclear weapons has already taken on a new quality.

A crisis of disarmament is threatening above all from two regions - Iran and North Korea. Iran's nuclear programme is only suspended for ten to 15 years. The agreement is based on the fact that we have achieved a complete transformation of Iranian society during this period. Danach, the idea was that Iran itself would no longer be interested in nuclear weapons. What happens if this bet doesn't work? North Korea is completely uncontrollable. How will other actors react - South Korea, for example? Donald Trump recommends that South Korea should arm itself with nuclear weapons. South Korea and Japan have also repeatedly addressed this issue. In the Gulf this applies to Saudi Arabia and Turkey. In the case of Saudi Arabia, this would exacerbate the bilateral conflict with Iran.

Almost 60 million people around the world are on the run. This is the highest figure since 1945, but the vast majority of these refugees will never reach Europe. So we will not drown in a flood of refugees. Nevertheless, this challenge remains even after the closure of the Balkan route. There is no such thing as unique causality for migration. And she's hard to influence. We always say that causes of flight should be combated where they arise. But if this is political repression in Eritrea or a lack of economic prospects in Nigeria - what should the Federal Government do about it? The migratory pressure will continue. As long as there are different asylum and procedural standards and a different understanding of migration in the EU, migration is also very difficult to manage.

// Conclusion: Uncertainty is the new normality.

More and more often, simultaneous, different types of crises will emerge in parallel. This makes reaction times very short, because crisis prevention is actually lacking. My observation is that Berlin's political scene can only deal with one crisis at a time. The Syrian civil war has now been going on for five years. Has he been in politics for five years? The answer is no, because other crises overlaid it - euro, debt crisis, Greece crisis, Ukraine crisis. When the next crisis comes, another one will fall out of the public eye. But keep smoldering.

Globalisation is perceived as a threat in many European countries. Anti-integrationalist forces have enormous impetus. They are also the core elements of populist political currents. When in autumn 2015 the federal government was no longer able to give the impression that it had the refugee problem under control, the voters moved away. Whether she can win them back is doubtful. For some time now, sections of the population have been united by their dissatisfaction with the state. The migration debate only opened the floodgates. This will entail protectionist and isolationalist tendencies.

We must be prepared to rely less and less on traditional powers of order. Anyone who seriously plans security policy in the coming years will have to rely above all on themselves.

Is that bad? I think it's as bad as we do it. Of course, the world is terribly complex. The decisive factor will be whether we succeed in creating the necessary tools for dealing with the challenges. If you want to shape the world, you have to turn to the problems, perceive them and be interested in them. ® {/mprestriction}