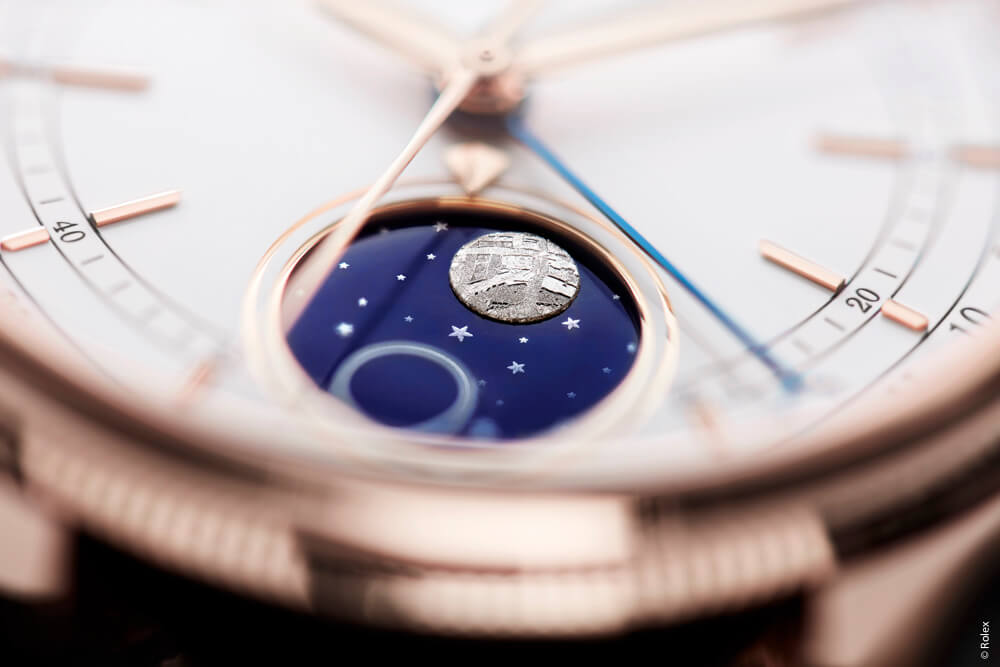 Style. Who likes to live every second? More and more manufacturers are leaving the temporal small and small to electronic systems and recalling their tradition as the "slow food" of the watch industry. They concentrate on dealing with the long periods of time - days, weeks, years - and the big picture. With the greatest precision, of course.

The boy sits motionless on top of the scaffolding, his hands folded, his gaze lowered. "The Wait" is the name of the sculpture by Michael Emgreen and Ingar Dragset that is currently on view at the Hamburger Kunsthalle as part of an exhibition on the subject of "Waiting".

As visitors stream through the rooms, the rigidity of the lifelike figure irritates. Here, as with other exhibits, it becomes apparent how little sovereignty we have in our perception of time. That we feel rushed by an increasing fast pace is a commonplace. Especially since we all want more time. But the fact that man is no longer familiar with the great periods of time, that slowness disturbs him, is a new development. "Time must obviously not be long," explains the author Friederike Gräff during a walking reading through the exhibition.

Watch manufacturers have always made a living from making time measurable and manageable - and so far they have followed the dictate of cutting it into ever smaller sections. On the threshold to modernity, technical development made it possible and absolutely necessary to produce watches that were accurate to the second. New production conditions and the worldwide movement of goods demanded that captains, artillerymen and railway engineers use exactly the same timepieces, while factory workers were helped by Wecker to arrive on time for their shifts. In addition, the blossoming competitive sport needed a more and more accurate time determination. Among the watch manufacturers, it became clear who could reliably stop fractions of a second, enlightened and modern decimal: tenths and hundredths of a second.

Just a few years ago, companies such as TAG Heuer and Montblanc were still competing in sports to mechanically determine the shortest period of time with hands that rotated invisibly fast to the human eye - even though quartz watches have long since mastered this more confidently.

Now, however, more and more manufacturers are abandoning the temporal small details to electronic systems and recalling their tradition of dealing with long times;

The decisive antithesis to short-time measurement are clocks that rely on the display of astronomical processes. As early as the Middle Ages, resourceful craftsmen began to rebuild the complicated celestial mechanics and soon developed the most complicated movements with numerous calendar displays. They weren't very accurate in our estimation. But that was irrelevant; no one lived at minute or even second intervals. In the 20th century, the company even succeeded in designing perpetual calendars for small wristwatch cases. The fact that they can only take leap years into account up to 2100 may now and then direct their owners' attention beyond their own lifespan.

Of course, it's not just about practical information, but about a special view of the world and its structure. Rolex, not exactly known for poetry, makes astronomy an authentic experience with its new Cellini: 29 days, 12 hours, 44 minutes and 2.9 seconds are needed for the moon to orbit the earth. Simple moon phase displays, on the other hand, round off this event with their gear train to 29.5 days - so eight hours per year are wrong after all. Sie must therefore be corrected by one day after only three years. With the Cellini Moon this is only necessary after 122 years. The picture of the earth satellite consists of meteorite, quite obvious.

The Métiers d'Art Copernicus celestial spheres by Vacheron Constantin leave out the little seconds. Moreover, hours and minutes only take place on the fringes. At the centre is the orbit of the earth around the sun and through the signs of the zodiac - not too fast for the human eye, but very, very slow and therefore particularly attractive.

The so-called comb, a tiny, vaguely pretzel-shaped component visible in front of the tourbillon cage of the Breguet Marine Équation Marchante, is also carefully scanned: it controls a second pointer that indicates the "true solar time" throughout the year. Because of the elliptical shape of the Earth's orbit, our days are of different lengths; our conventional time measurement assumes an average length of day. The true solar time therefore differs up to 14 minutes after sunset in February and 16 minutes before sunrise from the "mean solar time". The micromechanical marvel is a tribute to the merits of the company founder Abraham Louis Breguet for ship chronometry.

The nautical topic leads other manufacturers to further complicated time intervals - those of ebb and flow. Sinn offers a pragmatic implementation with the inner rotating ring of the 240 St GZ. The mechanical recording of the tides and their strength is technically more complex with the Admiral 45 Tides by Corum - and most poetically with the Real Moon Tides by Christian van der Klaauw, whose model "Planetarium" has the longest rotation of all precision watchmaking: the 29 years Saturn needs to orbit the sun.

In addition, today there are also quite profane, but important time units, which so far have only been displayed by a few wristwatches: Calendar weeks, in which mainly building craftsmen, logisticians and merchants plan. You can read them since this spring on the Artelier Calibre 113 by Oris and on the enamel sheet of the Villeret Semainier Grande Date 8 Jours by Blancpain. A German company has recently made a name for itself with watches that completely dispense with the second and indicate the time to the nearest five minutes with a single, long hour hand. Manfred Brassler, founder and designer of MeisterSinger, takes his inspiration from medieval tower clocks as well as from technical measuring instruments when designing his products. "I'm not interested in nostalgia or escapism at all, but in a far-reaching simplification of the display," he explains.

But it also gives rise to sovereignty. The wearer of a single-hand watch is not shy of seconds, but keeps track of the course of the day. Brassler likes to admit that single-handed watches are a niche subject. Technically, however, like Oris and Blancpain, it is in line with the long-term trend: the movement he had developed for his flagship model, the Circularis, stores the energy for 120 hours of precise running in two barrels. The usual time so far has been a good 40 hours. It takes a little longer to wind the circularis by hand. But the owner can also take up to five days until the next energy boost.

The author Friederike Gräff also explains at the Hamburg exhibition that "waiting" also has positive aspects: "Those who voluntarily wait radiate great confidence.

For Hermès, watch designer Jean-Marc Wiederrecht has horologically transposed the theme of waiting and turned it into a positive one. On the L'heure impatiente there is a retrograde countdown over one hour to a chosen time, which is then announced with a bright bell tone. "The idea came from Hermès, the first sketch was made very quickly - but the construction took years", Wiederrecht explains his own experience with the long times.

The Impatiente is not Hermès' first work, in which Wiederrecht reinterprets time perception and representation; in Le temps suspendu, time seems to stop at the push of a button. "I was also interested in the philosophical," explains the constructor, "but with the impatient, the subject is quite simple - anticipation."

As is customary in economically uncertain times, the watch industry is currently remembering its greatest successes of past decades and relaunching them.

Never before has there been so much, but also so carefully made, authentic retro design as this year. For customers, it draws a wide bow back to the zeitgeist of long gone, but seemingly familiar epochs. Omega has scanned three jubilarians in its own museum and reproduced them true to the original (picture below and top right). The Speedmaster Professional, Railmaster and Seamaster 300, all released in 1957, are also available as a trio in a limited collector's box. The fact that she is lined with bright broad cord makes the illusion of having excellently preserved heirlooms in front of her almost perfect.

The Big Crown 1917 by Oris points further back, its centennial model was not quoted, but largely copied, up to the elaborate hand position via crown and pusher at 2 o'clock. The "Banana" watch of Tissot (picture left) is driven by a quartz movement, but embodies the theme of the long time in two ways: In 1917 the original, owned by a Russian diplomat, was revised after a long journey from Petersburg to Switzerland. The way back remained blocked in the turmoil of the revolution.

The convincing comeback of such classics is helped by the fact that the trend towards ever larger watches has now been broken. The new editions are enlarged by only a few millimetres, if at all, in order to be contemporary; the reduced design of the 1950s and 1960s is also retained. The TAG Heuer Autavia Calibre Heuer 02 (centre right) is the same as the Calibre Heuer 02, despite 42 millimetres of

The diameter of its model from 1966 (38 millimetres) is almost on its hair. The Breitling Superocean Heritage II comes in the 42 millimetre version just as factual as its 60 year old ancestor, created at a time when diving was a serious business and the word fun sport had not yet been invented.

It is hardly noticeable that the new edition of the first Grand Seiko from 1960 with 38 discreet millimetres is a little bigger than the original from 1960. It looks entirely like a well-preserved, in the best sense unspectacular Sunday watch from a completely healthy, bourgeois world - and is therefore probably one of the most discreet variants of wearing the latest horological technology. At the Zenith Heritage 146 (picture below) the 38 millimetres are the authentic measure. With the fine play of the hands and the graphic elements reduced to the essentials, it draws on the aesthetic ideals of a long past epoch - and carries them into the future.

How to invest it Threadneedle Management Luxembourg S.A. 122
Small Caps. Shares of smaller companies, they…