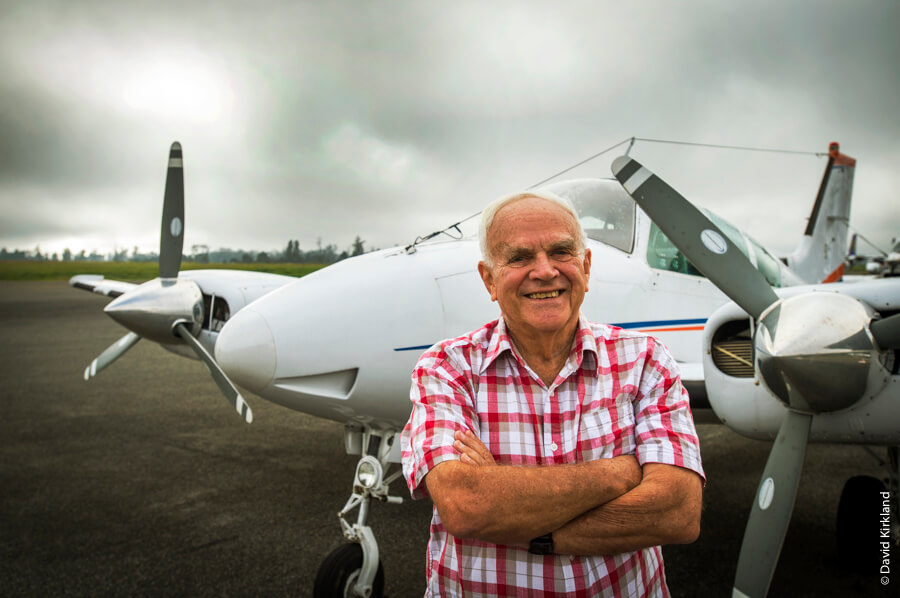 Adventure. Bob Bates came from Australia to Papua New Guinea in the mid-1960s as a young engineer. He fell in love with the inaccessible and wild country and set about opening up the rainforest with airfields and lodges. Today Bates is the largest and most famous tour operator there. Even at 77 he still climbs into the cockpit of his bush pilots himself.

Bob Bates stands on the terrace of Rondon Ridge Lodge, one of the youngest of his hostels, and looks down on Mount Hagen in the highlands of Papua New Guinea. The provincial capital of the Western Highlands takes its name from the German colonial official Curt von Hagen. Between 1884 and 1914 the Wilhelmine Empire had finally given a colonial intermezzo in the north-eastern part of the third largest island on earth. "The highlands were still an almost completely white spot on the map," explains Bates. And then he adds with a smile: "Well, in principle, it still was when I hit the ground here in the mid-1960s."

Born in Newcastle, New South Wales, north of Sydney, Bates came as an engineer to the eastern part of the island, which was administered by Australia as a trust territory. The western part, the former Dutch India, was annexed by Indonesia in 1962 and today forms its provinces Papua and Papua Barat. There allegedly had happened the most famous case of cannibalism at that time, for which the whole island was then infamous for a long time. Michael Rockefeller, offspring of what was then the second richest family in the United States, had disappeared without a trace during an expedition to the south coast in 1961. Some suspect that he fell into the hands of the Asmat tribe, who were feared for their headhunting. But life was also dangerous in the eastern part. Again and again stories about human sacrifices appear in the media. Women accused of witchcraft are cruelly tortured and murdered. Deadly battles between rival clans are the order of the day. Port Moresby, the capital of Papua New Guinea, is still considered one of the most dangerous cities on the planet today.

How on earth does the idea of founding a travel company here arise? "At first I only planned roads, bridges and bush clinics on behalf of the Australian government," says Bates. But soon he was fascinated by this colourful country with its 1000 tribes who speak 800 different languages. They meet in colourful costumes and war paint for meetings and dances, so-called Sing-Sings. They wear a headdress from the feathers of birds of paradise, which are native only in Papua New Guinea. "The country is one of the last natural paradises: with untouched rainforests where rare orchids grow and hundreds of species of butterflies live, a real treasure trove.

What he liked, he thought, could inspire others. In the early 1970s, he quits his permanent position with the Australians and buys his first plane, a Cessna 182. "The roads, if they existed at all, were soaked muddy runways in the rainy season. It took days to cover a few hundred kilometers."

With his four-seater Bates continues to fly for the "Aussies" over the island, because everywhere now rustic runways were created, sometimes on grass, sometimes on clay soil. At the same time, he sets up a travel agency. With all-wheel drive vehicles he offers adventurous tours through the highlands, rents simple hotels. "I soon realized, however, that this would not work. There was practically no infrastructure. The so-called hotels were rather barracks. I needed my own quarters first."

Shortly after the Australians released the country into independence in 1975, Bates built his first lodge, the Karawari, on the Sepik River. There is no road within a radius of several hundred kilometres. The umbilical cord to the outside world is the river itself. Or the airstrip in the middle of the jungle that Bates has cleared for it. Those who travel here with themselves or one of their pilots from Mount Hagen will rattle with the small propeller plane over dense, steaming rainforest from which limestone mountains protrude like the teeth of primeval giants. In between, brown rivers meandering through the green carpet like fat snakes. "For a pilot with passion, there is no more beautiful country in the world," Bates is convinced, who now has more than 10000 flying hours on his back.

At first he flies here without GPS. Air traffic control works sloppily, the charts are inaccurate, thunderclouds piling up high are the norm. Nevertheless, he is spared major accidents. Once an engine breaks down, but fortunately it is on the way with a twin-engine machine. When a few months later the engine of his single engine stops, he is just damn lucky. In the middle of the dense jungle he finds a tree-free grass area and can make an emergency landing there. "I could easily do without that kind of thrill. After all, I'm more of a control freak than a daredevil. On a scale of 1 to 10, I'd rate my risk appetite 2, 3 at most."

Tourists appreciate its character and reliability, as well as the comfort that Bates' Trans Niugini Tours (TNT) offers. They willingly come to the end of the world: Americans are now the largest customer group ahead of Germans, followed by Britons and other Europeans. "Autonomy is the key," explains Bates. "You must never be dependent on anyone here. We have three of our own planes, our own boats, our own buses and all-wheel-drive cars." In 1985 he had the Ambua Lodge built in the province of Hela, which is considered to be the Wild West of the already rough country. The British filmmaker David Attenborough will later shoot his outstanding bird of paradise documentary "Attenborough in Paradise" here. In the meantime, the lodge has been awarded several times as one of the best addresses worldwide for ornithologists.

In 1989 he even dared to offer river cruises on the Sepik with the "Sepik Spirit", built exactly according to his wishes - in a region where headhunting had been an everyday occurrence 30 years before. In 1991 he buys and renovates the Malolo Plantation Lodge on the coast near Madang. Bensbach Lodge near the border to Indonesia has been supplementing its portfolio since 2003. In 2006 he had the Rondon Ridge Lodge built above Mount Hagen, in 2013 the one at Lake Murray. "But now it's over, I don't have any more plans," sums up Bates, who himself lives in a puristically designed flat-roofed house in the woods above Rondon Ridge Lodge.

Despite all his expansion efforts, the entrepreneur never forgets that he is operating in a high-risk environment. However, this has less to do with cannibalism than with exploitation and predatory capitalism. A gigantic ExxonMobil liquid gas project is currently causing trouble in Hela province. Corrupt regional politicians are trying to cut a fat piece out of the cake. And ordinary people are afraid of going out empty again. They flock together in demonstrations that often sink into chaos and violence.

It is therefore essential for Bob Bates to demonstrate a sure instinct. He knows very well that he has to pull the local population to his side by giving them jobs in the lodges, buying their crops, supporting municipal facilities such as schools or health stations, and selling the carvings of the tribes as souvenirs to tourists.

Today, between 3000 and 4000 guests per year travel through the country with TNT alone. That's a lot, since only 21000 visitors come here every year. From all over the world, mind you. Bates' customers stay an average of five to ten nights. This brings him ten million US dollars in annual sales and makes him the largest tourist operator in PNG, as the Papuan people call their country. Depending on the season, he has 200 to 250 employees, including as many locals as possible. He doesn't need to hope for support from the state: "The Ministry of Tourism doesn't help, but it doesn't interfere either."

As ambassador of his nation, for example at the International Tourism Exchange in Berlin, Bates has to appear himself. He then patiently explains that the tribal conflicts are generally harmless to visitors, but of course damage their image. That crime is only a problem in the cities, but in the Western media, especially in Australia, it is exaggerated and reported one-sidedly. That the clear-cutting of the rainforests is depriving tourism of the future of its foundation, because not a single national park has been designated in the entire country to date and mining companies and lumberjacks would therefore have an easy job. That prices in the country are so high because almost everything has to be imported.

By openly addressing the problems, the clever entrepreneur steers his audience step by step towards his "Unique Selling Point". Travelling with him is expensive - the rather simple Bates accommodations are as expensive as safari lodges in Africa with daily prices between 700 and 800 US dollars per person - but also safe. He has never leased aircraft from other companies, but has always bought them himself.

The planes are well maintained and are flown by professionals, mostly experienced Australian bush pilots. He negotiated contracts with the tribes: They perform in their traditional costumes for a fee that Bates pays. But his guests are not approached for every single photo for money and can take their pictures in peace.

Now, at 77, Bob Bates, the airline boss, tour operator and tourism ambassador in personal union, is proud of his life's work. He never let himself be defeated: not by the difficult political conditions, not by the malaria that afflicted him several times, not by the burglars who stole the television and a valuable pilot's watch from his house. The only thing he obviously didn't manage was the succession. His two sons live in Australia and have no interest in coming to PNG permanently. Bates therefore wants to transfer TNT to a foundation he wants to set up in good time.

Then, the adventurer hopes, he will have even more leisure for flying, still his great passion. Bob Bates has been flying for 45 years. And doesn't intend to stop.

In front of him stands a large globe, decorated with red lines. They show the routes of the flying safaris that he has already undertaken with his Cessna 180 (range: 1200 kilometers): the entire South Pacific, around the world, South America, Zimbabwe, Croatia. In Russia he had run out of gas, near the Marquesas he once got into heavy thunderstorms.

Soon he wants to leave again - two months South America with one of his "Mates", as the Australians say. "Let's see who has time." And if nobody comes along, he stays at home: "I prefer to fly in the highlands of PNG."

Opinionleader Christian Klein 130
With its rules on taxonomy, the EU will initiate…

How to earn it Cornelia Knust 178
Expansion. The Thannhuber family of entrepreneurs…

How to earn it Klaus Meitinger 136
Innovation. The only effective climate protection…