The most beautiful triviality of the clock. 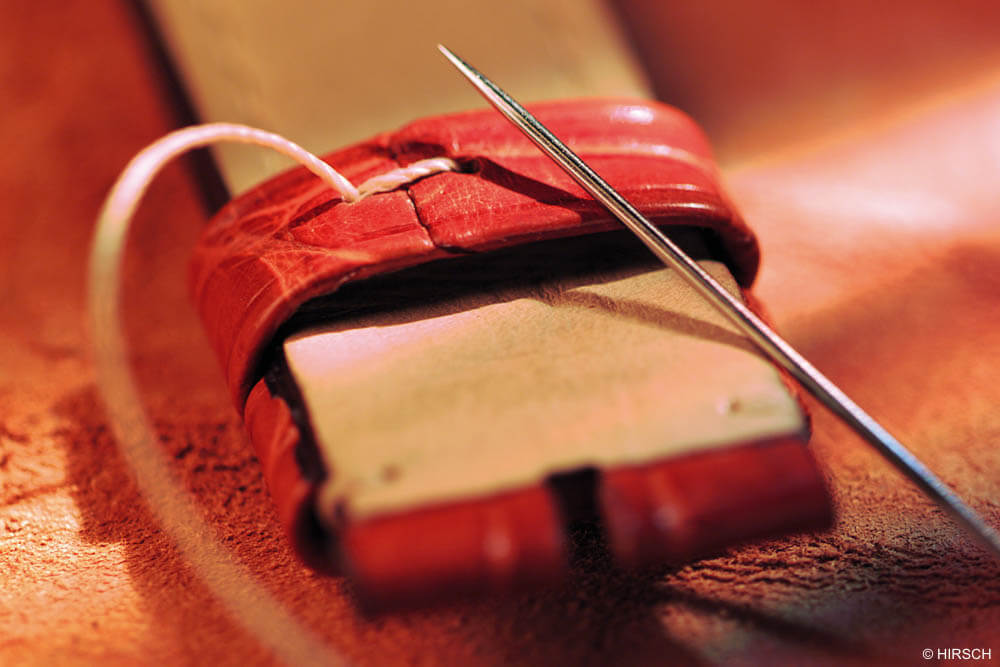 Watch straps. Whether crocodile, rubber or velour: the bracelet essentially determines the character and effect of a watch - and also says something about the owner. It is a welcome opportunity for manufacturers to differentiate themselves from the competition and demonstrate their craftsmanship.

Customers prefer to wear the leather of beasts on their arms. Croco, for example. It's a bit like they have a trophy with them." Robert Hirsch grew up with leather. His family has been manufacturing high-quality watch straps from it for generations and supplies many major brands. The "bad leather" has always played a special role. "Products from the skin of peace-loving herbivores never exert a similar stimulus. Calfskin is probably just too harmless."

At first glance it sounds astonishing that watch straps should be charged with so much archaic symbolism. After all, we have only been wearing our timepieces on our wrists for about 100 years and no longer in our vest pockets. Only ladies, in the absence of a vest, had something like wristwatches in the past: dainty pieces of jewellery, mostly created as precious one-off items.

It was only on the battlefields of the First World War that more and more men strapped their watches to their wrists with leather straps out of pure survival instinct. Those who erected themselves to laboriously pull out a pocket watch made themselves the target for the machinized gunfire. Thus the wristwatch always has a warlike background, which fits quite well to Hirsch's considerations.

Today, however, it is more important that the wristband of the watch determines its optical effect as well as its wearing comfort. In times when the watch industry has to think about the qualities that will convince the next generation, things are changing in the wristband sector as well. Leather as well as new materials are all about handcrafted traditions, high-tech and giving the customer something that not everyone has.

Hermès, for example, uses its extensive saddler experience and employs 13 specialists to produce straps for its own watch brand at great expense. "50 steps are needed on average to complete a handmade tape," says Laurent Dordet, CEO of La Montre Hermès, "and that takes at least 75 minutes per tape." Large quantities are of course not produced in this way. Hermès supplies only the friendly brand Parmigiani with the coveted ribbons - and Apple also gets the iconic double tour ribbons for small special series. 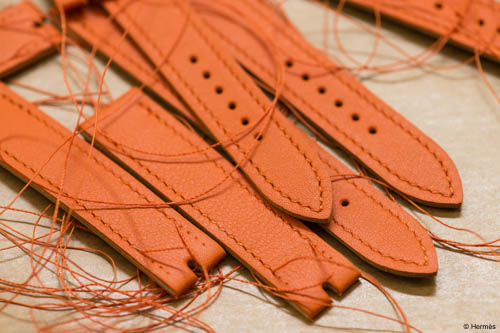 The Klagenfurt watchmaker is not allowed to say to which brands Hirsch supplies; mounted on the watches, the straps do not bear his name, but that of the manufacturer. "But, well, of course it also says 'made in Austria' next to it", Robert Hirsch at least gives a hint.

Together with his customers, he develops new series of bands that fully correspond to the character of a new collection and the much-quoted creative "DNA" of the manufacturer. The company has a development department with chemists, material scientists, technicians and designers. And, of course, it also maintains close contact with the tanneries. After all, new colours and surfaces must not only be abrasion-resistant and lightfast. "They must also retain their shine without being polished like footwear," explains Hirsch. The comparison with the shoes is not by chance. There are connections to the products of renowned manufacturers in particular. IWC, for example, purchases many of its leather straps from Santoni, a shoe manufactory founded in 1975. And perhaps the fashion of suede shoes that are fully suitable for the office, imported from Italy, has also led to an increase in velour bands on men's watches. The Longines Heritage 1945 presented this year is just one example. Her ribbon also features a few strong, light-coloured decorative stitches, as well as a patina-like strap and a detail that makes every watch look much more casual.

But Hirsch also sees other trends around the watch band. Improved changing systems make it easy to replace the belts. New materials replace leather or can be combined with it.

For a long time, the industry had not actively promoted the possibility of simple belt changes. She suspected that for many customers the problem-free separability of case and holder was a threatening rather than a comfortable idea: What could be easily detached could possibly be detached unnoticed and then cause damage to the watch or even its loss.

But this concern now seems to have subsided. The Jaeger-LeCoultre Reverso, for example, has been equipped with a quick-change system since 2016. "The bracelet can be easily changed at home in just a few simple steps. In this way, the wearer can adapt his watch to his outfit every day," explains Jürgen Bestian, General Manager Jaeger-LeCoultre Northern Europe. The Villeret Women from Blancpain will be delivered with five different coloured ribbons for this purpose. 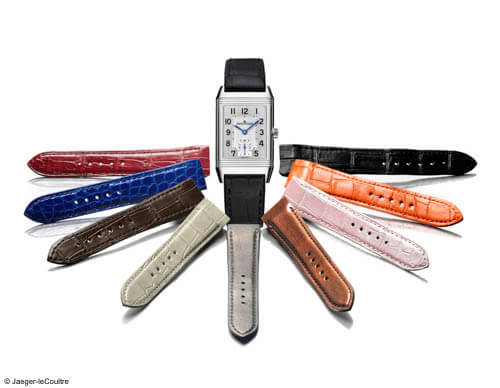 The Mido Multifort Escape Horween with its two leather straps, which can be changed according to clothing and mood, is still the exception for men's watches. Only striking watches are increasingly being supplied with two bands of different materials: One is particularly resilient under harsh conditions, the other is better suited for the civilian environment.

Rubber tapes were established years ago for use on and in water, but also generally as an indicator of sportiness, and their development is also constantly progressing. This year Roger Dubuis and Richard Mille showed what can be done with rubber bands: The one integrates tire particles from Formula 1 vehicles and makes the tapes also look like worn tires. The other uses the belts as high-tech carriers mixed with novel nanoparticles. 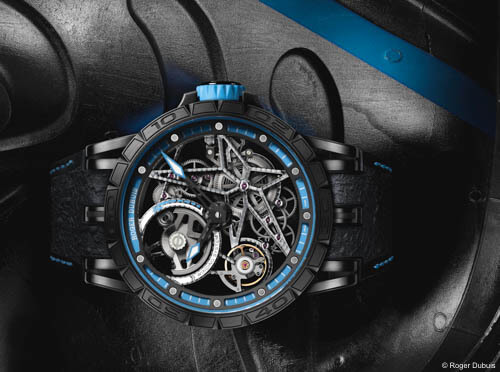 However, the horror in the watch community was great when Rolex, a specialist in the manufacture of functional metal straps, equipped its new Yacht Master - supposedly - with profane rubber. But the excitement quickly subsided again. The Oysterflex is in fact an elaborate metal construction, made water and weatherproof by an elastomer coating.

Obviously, the new band has now been well received in the Rolex community: The legendary Daytona chronograph is also available today in an Oysterflex version. Breitling, on the other hand, has given the plastic the structure of metallic Milanese ribbons for those who like the material but not its smooth surface.

One of the rubber pioneers is the Swiss watch brand Hublot. There this material was already used in the 80s for gold cases - and in some variants it was even permanently flavoured. Hublot still adheres to his "fusion" concept today, always trying out new material combinations.

The fact that watches were recently produced with dials and straps covered with classic fabrics from Rubinacci fits in well with the increasing importance of textile straps. These were in former times really only a woman topic, as tender silk satin ribbon at jewelry watches for the large appearance. The decisive impulse then came from the collector scene, where a few years ago it became chic to wear valuable vintage pieces casually on coloured nylon drawstrings, the Nato or Zulu straps. 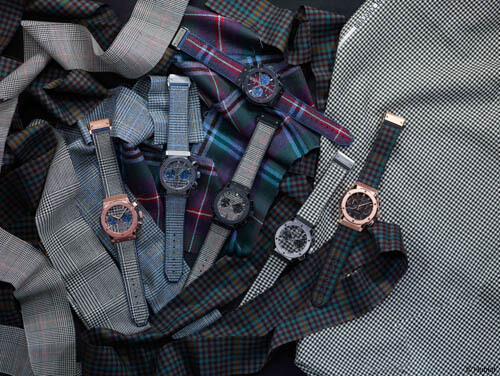 At the latest, the James Bond films turned the colored striped variants into cult objects. Omega therefore added its own Natos to its range. The new Railmaster, however, is equipped with a slightly thicker textile tape. Because a larger watch not only has to be attached to the wrist somehow, it also has to be stabilized. If the tape is too thin, the construction becomes top-heavy, especially with a high-rise housing. She then wears herself unbalanced.

So the perfect weaving fabrics for the watch are not ready-made. Tudor includes a second volume in his Black Bay Heritage Chrono, which is made on 19th century Jacquard looms. Nomos, whose name is associated with many leather straps made of special horse leather - the Shell Cordovan by Horween - also looked for the right fabric for a long time. "The first ribbons on the Ahoi, in the style of the swimming-pool locker keys, did not seem entirely appropriate to some, a little too cheap", remembers Nomos managing director Judith Borowski, "in the meantime we have weaved stronger ribbons especially for us in France".

During the intensive study of the right material ("Rubber is not a problem for our designers."), the aesthetics of the clasps were also examined more thoroughly: "Although this is a comparatively large piece of metal, it sometimes leads a shadowy existence. We also bought off the peg for a long time." In the meantime, Nomos has incorporated the clasps into the overall design of the watch. The gold watches and the neomatic series wear the in-house wing clasps.

The company has also learned more about its suede leather tapes and is looking for a supplier who does without the usual chrome tanning. This is finally suspected to cause skin irritations in some people. In general, the question of how much chemistry there is in which - very close - product is being questioned much more precisely today.

The growing environmental awareness of customers can also be seen elsewhere: "The question of species protection plays a role for many customers," observed Judith Borowski. "Water sports enthusiasts in particular are highly sensitive to environmental issues," adds Rico Steiner, Regional Manager at Oris: "Our conversations with professional divers always focus on plastic waste in the oceans. With the algae-based watch box, which we deliver with our Staghorn Restoration, we cannot save the world, but we can react to a problem. And of course we're also considering what we can do with the bracelet material in the future." Steiner may not reveal anything more about it yet, but a diver's watch made of quasi-aquatic material would certainly be a next talking piece.

Robert Hirsch has always been committed to sustainability in his family business: "For us, this means above all avoiding waste as much as possible. Although only the best parts of a hide can be used for the leather straps, the rest is finely ground and serves as a filling for the thickly quilted products - "whereby here and there even a quantum of crocodile can get into the calf strap," the entrepreneur smiles.

And what's not working anymore? Lizard, stag comes in, more and more out of fashion. So are pearl ray bracelets. For a few years the striking material could be seen on numerous noble timepieces. But even before Carl F. Bucherer became involved in ray protection and the tapes became ethically doubtful, customers had lost interest. Rays aren't really that bad either.®

Opinionleader Christian Klein 48
With its rules on taxonomy, the EU will initiate…

How to earn it Cornelia Knust 70
Expansion. The Thannhuber family of entrepreneurs…

How to earn it Klaus Meitinger 49
Innovation. The only effective climate protection…