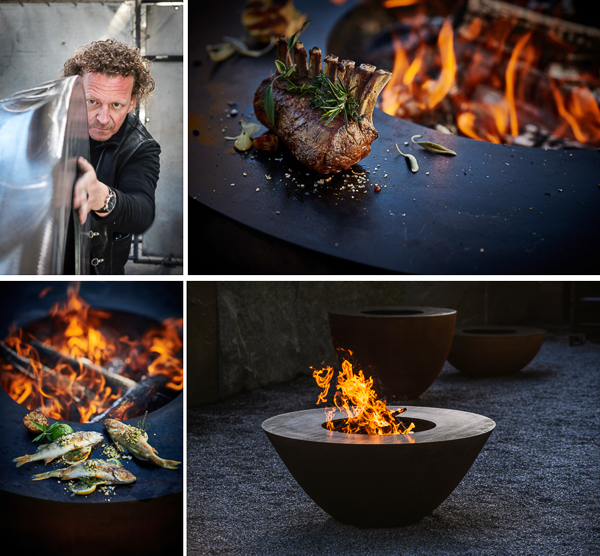 The Swiss sculptor Andreas Reichlin got stomach pains from meat that had been grilled on a normal grill. So he invented the fire ring - a sculpture that makes barbecue evenings very special.

If my father hadn't challenged me and my brothers over and over again, I might never have had the idea of the fire ring.

As young people, we should occasionally help our father, a successful entrepreneur with over 40 employees, to solve problems. He called the three of us together, explained the situation, and a few days later each of us was to present a proposed solution. This was of course difficult for adolescents. But most of the time we had an idea. This attitude - it doesn't work, it doesn't exist - has shaped me very much.

I love barbecuing. I had wonderful barbecue evenings with my friends, but then long, not so nice nights with my stomach. Because the smoke that settles on the meat caused me extreme stomach problems. Was it possible to grill in a completely different way? I began to think about it intensively.

I am a trained wood sculptor, have worked with stone, bronze, terracotta and then mainly with steel. At the age of 23 I opened my first sculptor's studio. In Paris I studied nude drawing at the Académie de la Grande Chaumière. Nude drawing is essential to get a feeling for proportions. I could always live off my art, so I had no economic interests when I tried to develop an alternative fireplace. As a designer, I know that an object doesn't work if it's just beautiful. And if it's not durable and sustainable, it certainly doesn't work. So I wanted a coherent object that combined function, aesthetics, statics, materiality and ecology in one form. I also wanted to use resources from our region. And the product should be made entirely of steel. Those were my guidelines.

It then took a few trials to find the ideal shape, thickness and processing of the steel. In 2004 the first sketches with angular forms were made, later they became round. For five years I continued to tinker with the fireplace while working as an artist. The biggest problem was: Since the temperature inside the ring is very high, the ring was deformed after a certain time. So I developed a technique that allows the ring and bowl to be connected in such a way that no deformation of the fire ring occurs during grilling. This special construction could then even be patented throughout Europe.

That was actually my job. In 2009 my girlfriend Beate Hoyer came up to me with the idea to found a company. Believe me, I never wanted to have a company with emphasis on never. I had everything I wanted with art. Free work, livelihood, an incredible luxury. At some point, however, Beate Hoyer convinced me with the argument that we could pass on to others the pleasure we had in the device.

The fire ring was something completely new at that time. Heute it is available in 15 designs and different sizes. We must have sold hundreds. Worldwide. And our small company today has a total of six employees.

The fire ring costs between 4100 and 11000 Swiss francs. The objects weigh between 100 and 260 kilos. If it were a cube, it could almost not be moved. But since the shape is round, it can be easily moved by rolling. The fire ring is delivered in a wooden box. After unpacking, the customer can disassemble them and has the first firewood.

With the success came of course also the imitators. I'm being honest with you - you're hurting my soul. These are people who have no ideas of their own and want to earn money on the backs of others. We, on the other hand, have won the most prestigious design prizes with the Feuerring: the Red Dot Award Best of the Best in 2016 and the German Design Award in 2018. For this reason I also have a vision: I am convinced that the fire ring will last, because it has something archaic, reduced to the essentials. And who knows? Perhaps it will also become a design classic. ®

How to earn it Silke Lauenstein 219
"The best is yet to come," said Wolfgang Trier a…

How to earn it Silke Lauenstein 284
In the latest issue, private wealth told the…

Editorials Klaus Meitinger, Moritz Eckes 245
Dear readers, We are actually hesitant to use…

Opinionleader Prof. Jochem Marotzke 253
What are the scientific facts around climate…

How to earn it Klaus Meitinger 378
entrepreneurship. The couple Martine and…