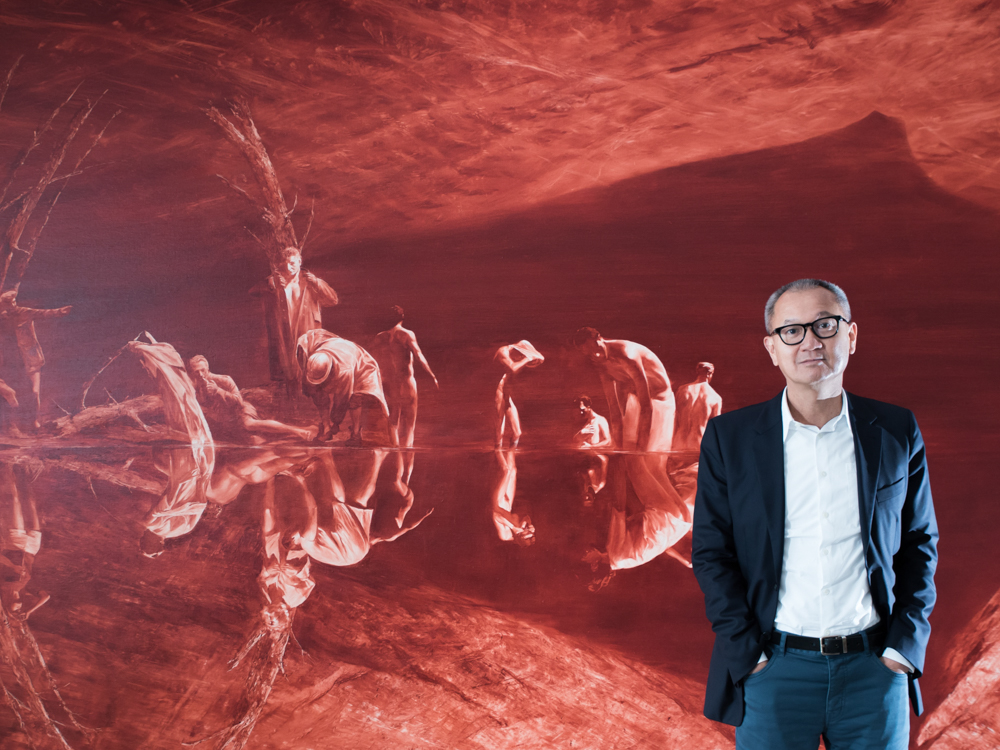 Collector. Pierre Chen earned his billion-dollar fortune with the multinational electronics company he founded in 1977, Yageo Corporation. He is a prime example of how the good intuition of a successful entrepreneur also works in the field of art. With the collection he has amassed over the years, he is one of the most influential and successful collectors in the art world.

There is a very stressful lifestyle in the high-tech industry. Art helps me balance my life, it calms my mind and slows my pace. Art has the incredible power to be unobtrusive yet therapeutic," says Pierre Chen.

For 27 years, there has been a close connection between the two careers of Chen the collector and Chen the entrepreneur. In that time, he has turned the once-local electronics company Yageo into a global market leader with a current stock market value of ten billion dollars, and built one of the most important art collections in the world.

The story of art collector Pierre Chen begins in a 140-square-meter apartment in the working-class district of Kaohsiung, a former port center in Taiwan. Here Chen grows up with seven family members. His mother, who taught clothing design, gave him his first exposure to aesthetics. "Then, when I had time to go out, I always went to two places: a bookstore and a gallery," he recalls in an interview with Forbes magazine. Both are still sources of inspiration for him today. "Since he was young, my father has been interested in beautiful things. He bought his first piece of art in his college days with savings accumulated from a year and a half of working part-time as a software programmer: a sculpture by Taiwanese artist Cheung Yee, which he discovered in one of Taipei's first galleries. It still adorns his office," says 32-year-old Jasmine Chen, who now heads the Yageo Foundation and manages her father's collection as well as the foundation's initiatives and projects.

Increasing profits from Yageo soon enabled Pierre Chen to invest in more artworks, which he bought from Asian auction houses at the outset. "In Asia, and especially in Taiwan, there was no sophisticated art scene with galleries and art fairs at that time," Jasmine says, explaining her father's focus on auctions. It was there that Chen built his first relationships and contacts. And just as the Yageo company was initially locally based, he began by acquiring the modern Asian art he was familiar with.

When Taiwan opted for capitalism in the 1980s and paved the way for democracy, Yageo also oriented itself towards the West. Chen made new connections and contacts. The more he traveled, the more he came to appreciate Western art and culture. "I was like a fish swimming from a pond to the ocean," Chen says in an interview with Christie's auction house.

"At the same time, my father always immersed himself in the subject with love and passion. He rarely participated in the noisy social life of the art world. Because of his work, he rarely made it to auctions and museums in person. He just didn't have the time," Jasmine recalls. Instead, in his spare time he devoured the books and catalogues that galleries and museums from all over the world sent him, constantly expanding his knowledge, forming his own tastes, and training his eye for the essential. Over time, he shifted his focus to works from the Classical Modern and Post-War periods. By the 1990s, Chen had acquired paintings by Pablo Picasso, Francis Bacon, Cy Twombly, Andy Warhol, Mark Rothko, and Gerhard Richter.

When Pierre Chen chooses a work, it is because it fits into a particular space in his environment. He has, spread around the world, several homes. His main residence is amidst the verdant mountain heights of Yangmingshan, with panoramic views of the energetic, vibrant city of Taipei. The art that surrounds him here and elsewhere must touch him emotionally. If, after intensive research and a few days of thought, a work of art still triggers the same effect in him as when he first saw it, he buys it. He tries to avoid the word collector. The emphasis is on "I live with art."

That's why daily engagement with the works is so important to him, outweighing any investment thoughts. Intuitively, he chooses the best works by each artist when he makes his purchases. Bluechip becomes the key concept of his collection and makes him himself one of the most respected figures in the global art scene. Today his collection also includes works by Salvador Dalí, Francis Picabia, Henry Moore, Aristide Maillol, Willem de Kooning, Donald Judd, Richard Serra, Louise Bourgeois, Yayoi Kusama, Alexander Calder, Georg Baselitz, Peter Doig, David Hockney ... - the list could go on. That he can indeed rely on his trained eye is illustrated by his purchases and their performance.

If Pierre Chen sells a work again, it's because he has an upgrade in mind for the collection. Jasmine calls it an upgrade.

Unlike her brother and twin sister from Chen's first marriage, Jasmine follows in her father's footsteps when it comes to art. As a child, she dreamed of riding horses, just like her sister. In 2002, her parents sent her to train with renowned German show jumper Paul Schockemöhle in Mühlen. From then until university, Jasmine trained during school holidays and competed in Europe. "The idea of competition was mainly awakened and inspired by my father, who is extremely competitive. He's an all-or-nothing kind of guy who gives 120 percent effort every second."

At the age of 17, Jasmine won the silver medal at the 2006 Asian Games in Doha, Qatar, and last August she finally fulfilled her dream of competing in the Olympics by representing Taiwan in Tokyo.

In fact, however, riding and jumping competitions have always been a hobby or so-called side job for her.

In college, her father advised Jasmine to study art history. No doubt he had in mind that this degree could open up many opportunities for his daughter in the future within the art collection. After graduating in 2011, Jasmine finally made the decision to pursue a career in the art world and put riding on hold. She started as a specialist at Sotheby's auction house and moved to New York, where she worked in the impressionist and modern art department for two years and later in the contemporary art department for two years. Her father's keen sense of the market and the quality of a work of art helped her in many ways, especially when it came to determining the caliber of works by the same artist. "Lucio Fontana's paintings with the slits, yes, look very similar at first glance. But an expert like my father immediately recognizes the work of higher quality."

His objectivity is her guide - learning from him a great honor. In 2017, she moved to Hong Kong, where she began advising wealthy collectors in Asia on Western art and how to build their collections.

She also bought for her father at auctions from time to time. Looking back, she remembers one story: for a drawing by Picasso, he gave her a limit of 3.5 million US dollars. The initial bid was very low, but a multitude of bidders drove the price way up. Jasmine was aware of the importance of the work, responded in her father's spirit and won the bid at nine million US dollars. "My father almost went crazy, but he never regretted the purchase," she laughs.

Today, Jasmine runs the Yageo Foundation with her father. Established in 1999 as the cultural arm of the company, it lends a curatorial framework to her father's collection. It not only houses the collection, but also promotes both the local art scene through the sponsorship of exhibitions, research and educational programs, and the artistic dialogue between East to West.

The Foundation is also committed to the creation, publication, and sale of printed materials on art and culture, including scholarly texts, artist monographs, and catalogues raisonnés. And so, although Jasmine Chen "lives art" herself in this environment and has also acquired some works for her home, she would not describe herself as a collector by analogy with her father. Her equally trained eye, she says with a laugh, would simply tend toward works she couldn't afford.

Hunting fever - how Asia's collectors are changing the art market.

The importation of Western art into Asia through Art Basel in 2013 fundamentally changed the art world. Since then, financially strong competitors from Asia have been a force to be reckoned with. China's economic dynamism, in particular, is leaving a deep mark on the art industry. The number of self-made billionaires is rising, and new private museums are being founded almost daily. The motto is: the bigger, the better. The necessary small change to buy art doesn't seem to be a problem.

The younger generation in China is strongly community-driven. Material wealth is shared on social media. Works by artists that decorate the homes of friends shape their own taste in art. Buying art becomes a social event, serving to build prestige. Collectors from Taiwan and Japan are more reserved in comparison. In art circles, they are among the more discerning collector communities in Asia.

The hunt for the best works naturally drives up prices. The globalization of the art market has in the meantime led to a situation in which it is almost impossible to buy masterpieces at reasonable prices. At the same time, however, the market is now becoming more differentiated. "Works of art from the middle class are more difficult to sell today than a Picasso that is in the double-digit million range," explains Jasmine Chen. But it is precisely for the top works that what "The Times" wrote back in 1987 is even more true: "The art market is a 'market without a roof' - open to any upside surprise."

After graduating with a degree in engineering from National Cheng Kung University in Taiwan, Pierre Chen founded Yageo Corporation in 1994. In a few short years, he turns the company into one of the world's largest suppliers of electronic components, with 2020 sales of $2.4 billion. Currently, he is about to move into a whole new dimension. To bolster his own capacitor business, Chen acquired Taiwanese rival Chilisin Electronics for $1 billion this summer, preparing for a merger with Hon Hai Technology Group. Its subsidiary Foxconn is known as Apple's most important supplier. The new joint company will be called XSemi and will revolutionize the semiconductor industry. The plan is to be able to offer chips at significantly lower prices.