Going with the flow. 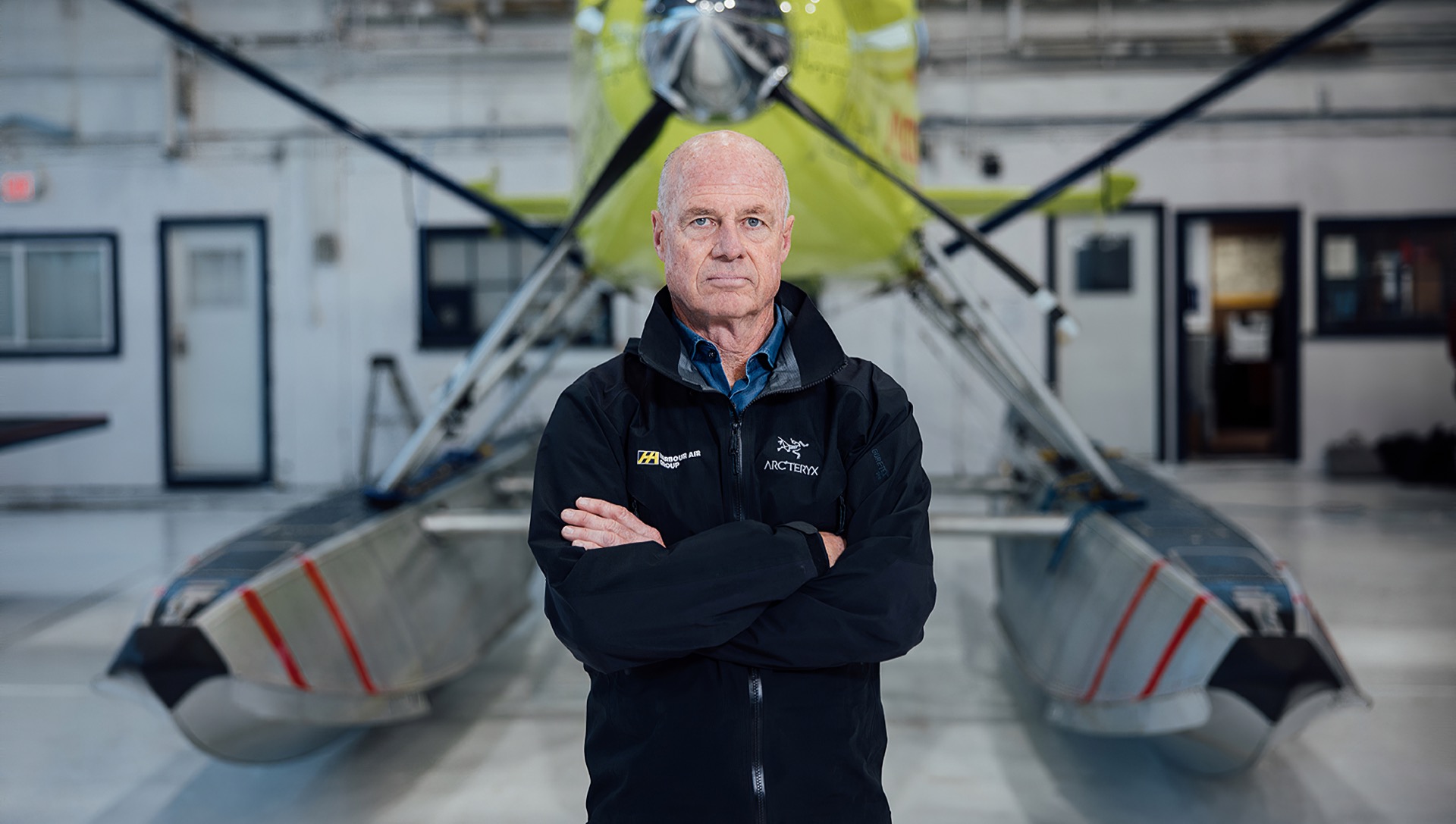 Innovation. Greg McDougall is the founder and CEO of Harbour Air, North America's largest seaplane fleet. He managed to make the world's first flight in an all-electric commercial aircraft. He won't save the world with it, but it's a start.

Greg McDougall doesn't usually lose his cool that easily. In his younger days, he piloted seaplanes through fog banks, thunderclouds and veritable storms. But on the morning of Dec. 10, 2019, he's actually a little nervous as he drives to the Harbour Air Seaplanes terminal in Richmond near Vancouver.

Although the air is damp and cold, hundreds of onlookers and members of the media have gathered on the banks of the Fraser River. "I was really surprised at how many people suddenly showed interest in our maiden flight. That built up tremendous pressure."

What the public sees next is, at first glance, less than spectacular: a 63-year-old man climbing into an equally old DHC-2 de Havilland Beaver at the dock, a rugged old-school bush plane that can carry up to six passengers. In Canada's watery western province of British Columbia, it's a common sight. This squeaky yellow Beaver, however, looks a little different, and it behaves differently, too: on its "nose" is a technical drawing, with the words "Powered By MagniX" written behind it. And when McDougall takes the machine into the air, the audience only hears the propeller. The 750 hp magni500 drive system itself makes almost no noise - it's a pure electric motor.

The flight lasts only a few minutes, then fog forces an early landing. As McDougall touches down on the water, applause erupts. "It was overwhelming, I felt a bit like an explorer from the old days." Indeed, the head of Harbour Air has achieved something special, outpacing industry giants such as Airbus, Boeing and Rolls-Royce. They had not managed to get an e-airplane for passengers into the air until then. Granted: It was only a seven-seater. But still. McDougall may not have made history, but he did provide an important impetus.

The pioneering feat, however, does not come as a surprise. In Canada's aircraft industry, Greg McDougall has long been a force to be reckoned with. Earlier in 2019, the airline chief was even inducted into Canada's Aviation Hall of Fame for lifetime achievement.

"The first time I sat in an airplane when I was six, I was fascinated," says McDougall, who grew up with his Canadian parents in southern California. "I knew flying - that's what I wanted to do when I grew up." Right out of high school, he gets his pilot's license and hires out as a bush pilot in Canada's far north. Disillusionment follows promptly. "I had bosses for whom safety was a foreign word. We flew with overloaded machines and in all weathers. That was just the mentality back then." In retrospect, it is a stroke of luck that he loses his job during the recession in the early 1980s and decides to start his own airline out of necessity. With a partner, he leases two Beaver seaplanes. "We didn't really have a plan. But I knew that safety should be our number one priority. We wanted an airline that people would trust with their kids, too."

Initially, Harbour Air offered charter flights to the timber industry. Later, his partner having already left by then, McDougall focuses on scheduled regional flights for business travellers in the Vancouver-Victoria-Seattle triangle. From the airports on the water, customers can reach the city centers very quickly. The fleet is growing strongly: in 2019, before the outbreak of the pandemic, Harbour Air transports more than 500000 passengers on just over 30000 flights and has the largest seaplane fleet in all of North America with more than 40 aircraft. At its peak, 450 employees work for the company.

In his scarce free time, the entrepreneur himself flies to the cabin on the lonely coast of British Columbia, where he had spent summers since he was a teenager. "That's why I live in this province, after all. We have the greatest nature on the planet here, endless forests and huge glaciers. It's important to preserve that for future generations. That's ingrained in my DNA." McDougall is doing what he can: He's buying an electric car. Makes his airline carbon-neutral. Has the roof of his terminal in Victoria greened. Put up 50 solar panels. Buys four beehives.

But most of all, he's reading a lot of books about the electrification of transportation. "In the process, I got the impression that the aviation industry has been stagnant for decades. The first e-airplanes already existed in the 1970s, but they were too expensive. And there was no climate crisis yet to make the issue seem urgent." The head of Harbour Air doesn't quite understand whether the big players in the industry are cutting their teeth on the subject of e-mobility because it's too technically complex, or whether they simply have no real interest in it.

Then, in February 2019, MagniX CEO Roei Ganzarski stumbles into his office and tells us about his magni500, a new electric drive system with high power density. Cleaner and more efficient than anything on the market by then, he says, it's supposed to be. Ganzarski wants to unveil the e-motor at the Paris Air Show in June 2019. The two are quick to agree: they want to have a Beaver from McDougall's fleet up and running with it by the end of 2019. Their motto: Someone has to do it eventually.

21 days before the self-imposed deadline, the maiden flight actually succeeds. McDougall is well aware that this is only the beginning. Test flights are now taking place almost weekly, with the aim of further improving the technology. In 2022, the certification and approval process for the propulsion system and retrofit should be completed. As soon as possible, he plans to electrify his entire fleet. "My airline is more predestined for this than any other. We primarily fly short routes and use very light aircraft to do so. So we don't need particularly large and heavy batteries. Most of our routes can be covered with existing battery technology."

However, the batteries currently on the market cannot yet compete with aviation gasoline. The latter has a power density of twelve kilowatt-hours per kilogram, while rechargeable batteries come to just 0.2 KWh. It doesn't help that electric motors are generally very efficient. Refueling takes a long time, and in remote regions of the province there are still no charging stations at all.

McDougall is confident, however, that the battery issue will be solved quickly: "Before Tesla started, nobody invested in batteries for cars - because there were no vehicles in which they could be used. Now I see a lot of innovation. It's going to be the same in aviation." In addition, he said, the MagniX engine is not dependent on any particular storage technology: "We are in contact with several developers and will decide on the best technology at the moment when we go into series production. At the moment, lithium batteries are still the first choice for short flights - but for a 30-minute flight, the Beaver has to be plugged in for just as long. For longer distances, hydrogen fuel cells could also become an issue in the medium term."

McDougall never tires of persuasion. For regulators, for example, e-planes are a whole new challenge. "They are much more familiar with mechanical systems and currently trust them even more. After all, safety is the most important point in flying. You can't restart an aircraft's engine at will once it's in the air, like a computer." That's another reason, he says, why it made sense to retrofit a well-known model that has been certified for decades.

Now he hopes the Federal Aviation Agency and Transport Canada will give their blessing soon. "They're very co-operative and help us over hurdles rather than put new ones in our way." But he has no illusions, he said. Canada hasn't always been particularly innovative, he says, and the aviation sector in particular is highly regulated.

McDougall knows that e-cars are currently still significantly more expensive than those with combustion engines. He doesn't even see this problem with electric aircraft: "The initial investment is roughly the same. And we can even save costs during operation. A conventional Beaver costs one million Canadian dollars in maintenance for 10,000 hours of operation, compared to zero dollars for an electric engine. We want to pass those savings on to customers in the form of lower ticket prices." Currently, all of its passengers pay a fee to offset CO2 emissions - after the conversion to an E-fleet, this could be eliminated. However, the e-pioneer is aware that electrifying all of his 40-odd planes is a very expensive and ambitious project: especially in pandemic times when cash is scarce.

Greg McDougall is well aware that he will not be able to save the world even if everything goes according to plan. After all, a study by the Energy Institute of University College London concludes that aircraft for two to twelve passengers produce only a fraction of the CO2 emissions of all air traffic. Even if larger planes are added and the radius is extended to 500 miles, the share is less than ten percent. That's less than 0.24 percent of all CO2 emissions worldwide. "But we can change the public perception of e-mobility. If we succeed in turning a prototype into a production model, we cause more people to become interested in the topic, even in completely different areas."

The more companies that get involved, the better it is for the world, he said. "But of course we want to be ahead of the game and lead the way," McDougall makes clear: "In less than two years, the first paying customers will already be flying in an E-Beaver."®

// Of new planes and an uncertain future.

The dream of flying is currently more of a nightmare. Passenger planes are rotting in permanent parking lots in the desert. Many airlines had to be rescued with state aid. Aircraft manufacturers are running tough cost-cutting programs.

The only thing that is certain at the moment is that aviation is facing far-reaching changes after decades of "business as usual". Even if air traffic should normalize at some point, the climate issue is guaranteed to return to the agenda. At the present time, however, it is not yet possible to board an e-airplane as a passenger. And there are no offers in the private jet sector either. So far, no manufacturer is mass-producing electric aircraft.

After all, according to the consultancy Roland Berger, there were 170 airborne e-ventures in February 2020, just before the pandemic, about 50 percent more than in April 2018. By now, there are probably more than 200. But most startups only have plans for futuristic air taxis and e-drones for parcel delivery services in the pipeline. Others are experimenting with e-motors for ultralights or solar panels, but this requires wings so large that such planes cannot carry passengers.

Airbus had put a program for e-planes on hold in 2017, but is currently tinkering again with hybrid-electric drives for regional jets despite the pressure to save money, and also wants to build hydrogen jets in the long term. Industry insiders confirm that a "workhorse" like the A320 would be suitable for this. However, there does not seem to be enough money for rapid progress at the moment. The Airbus prototype E-Fan X Hybrid was originally scheduled for its maiden flight in 2021, but the cooperation project with Siemens and Rolls-Royce has been postponed indefinitely. In addition, only one of the four engines is to receive an e-motor, the other three would still run on fossil fuel.