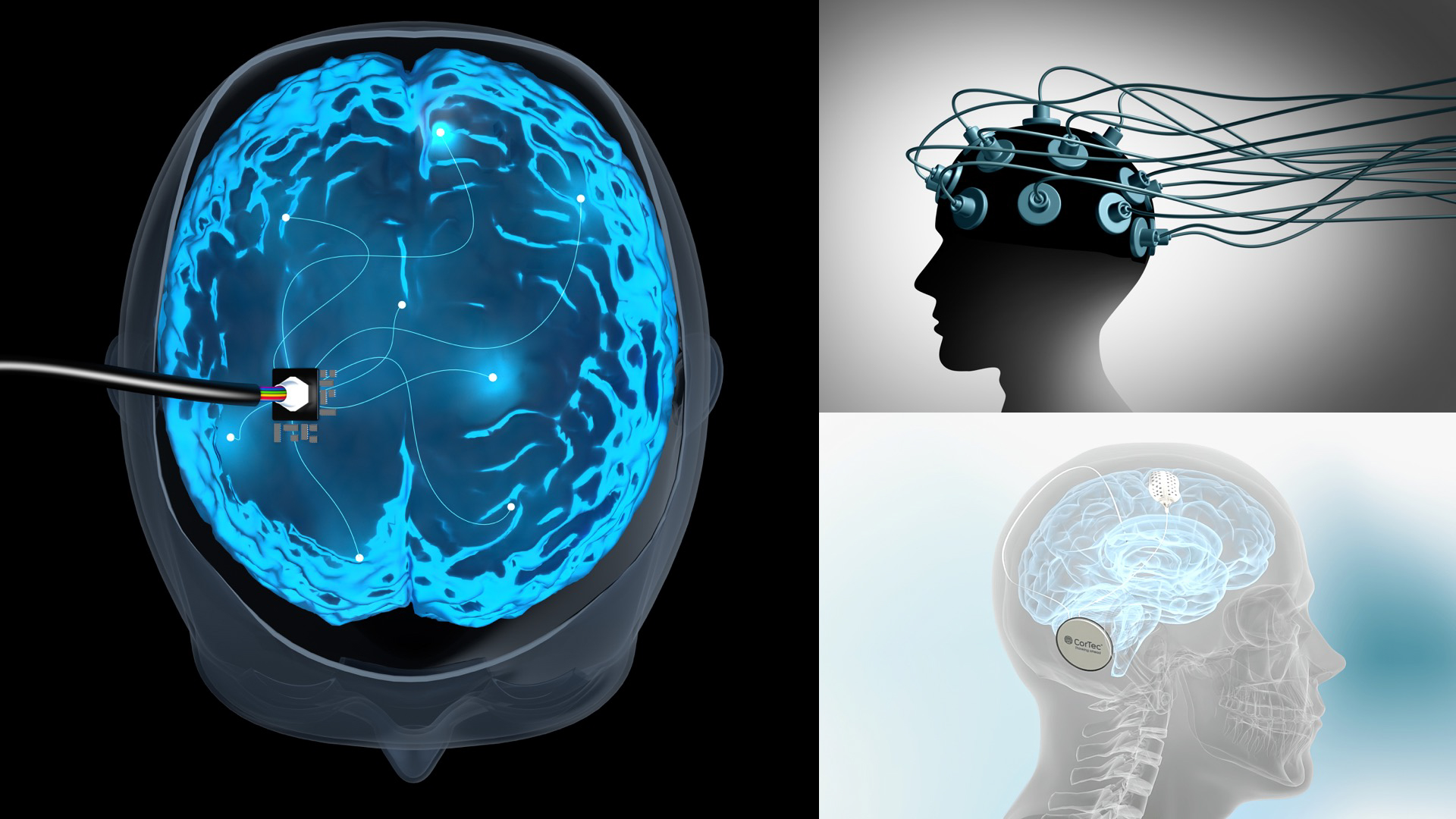 Innovation. Brain-computer interfaces send information directly from a living brain to the electrical circuits of computers. In this way, people today can control machines simply by thinking. And this is only the beginning.

Gertrude is transmitting. The chip, implanted under the skull of the pig, measures just 23 millimetres in diameter. It records the weak nerve signals from 1024 electrode-equipped cables, digitizes them and sends them via Bluetooth to a computer. The computer reconstructs what happens in Gertrude's brain when she walks, stands or lies down.

When the multi-billionaire Elon Musk presents his brain-computer connection Neuralink on YouTube at the end of August 2020, a hint of what might be possible in the future wafts across the globe. Will we be able to control machines with our thoughts in the future, even if they are located on other continents, thanks to Brain-Computer-Interfaces (BCI)? Direct swarms of drones over enemy territory with the power of thought alone? Read our thoughts into computers? And finally transfer the knowledge of artificial intelligence into our brain via a computer?

"Actually, what Musk did is more or less state-of-the-art today," explains Thomas Stieglitz, Professor of Biomedical Microtechnology at the Institute for Microsystems Technology (IMTEK) at the University of Freiburg, the largest university microtechnology institute in Europe, and one of the most important German experts in the development of BCI technologies.

However, the researcher is suspicious of record hunts à la Musk that require PR. "Today, BCIs are not necessarily about higher, faster, further, the maximum number of cables in the brain," the neurotechnologist believes. "Sometimes it is enough to have intelligent control systems that are able to support the brain in only a few places at the right time and in the right way so that it can recover after a stroke, for example.

Stieglitz's mission is to provide people with disabilities or neurological diseases with a better quality of life. "If 16 contacts in the right places in the brain are sufficient to improve the quality of life of patients with sentient arm or leg prostheses, then ultimately this makes more sense than laying hundreds of cables and connections in the body and brain."

In numerous experiments, test persons have already successfully controlled robotic arms, wheelchairs and exoskeletons by mental concentration alone. A groundbreaking aspect is that these people can now feel their arms and legs. Touch a cup of coffee and feel that it is hot. Or they grab a cotton ball and their fingers report back, so you only need to apply a little pressure.

In a person with a prosthetic leg, the impulse goes back and forth. The brain commands, "Leg, go forward." And the leg replies "I'm going forward, but there's a bumpy surface."

Facebook, which has been researching an implantable technology that allows users to enter text via thought transfer, is also thinking in the direction of writing by thought. The distant vision is that one day users will be able to communicate via thought transfer, perhaps even store their memories in the computer and replay them on demand - or sell them?

This no longer has much to do with the methods of the past. Since the late 1920s, medicine has been using the knowledge that the electrical signal currents of the nerves can be measured. This led to the development of electroencephalography (EEG), today the standard in medical brain diagnostics.

Patients are fitted with a hood with numerous electrodes that measure the extremely weak voltage fluctuations that penetrate the skull bone. Neurologists can then use the measurement curves recorded to monitor brain functions and, if unusual signal curves are detected, draw conclusions about diseases.

Variants of this technology are now also marketed by companies from the entertainment, fitness and wellness sectors. They warn of stress, fatigue or lack of concentration, and help with relaxation and meditation exercises. They are also intended to make learning and physical training more efficient.

Even the computer games industry wants to use brain waves in this way to adapt game play, characters and environments to the current mental state of a player, for example to get him out of a depression.

So while the long established EEG only works in one direction, from the brain to the computer, the new invasive BCI techniques can also trigger reactions in the brain the other way round with electrical impulses.

"In the treatment of Parkinson's disease, for example, an external impulse can be given to the brain to tell it not to tremble," explains Stieglitz. Hereditary muscle tremor, epilepsy or even psychologically caused obsessive-compulsive disorders can also be treated in this way. This can only be done by means of implanted chips whose electronics can react to impulses from the brain.

So although research has come a long way, it is still at the beginning of a long road. If neuroscientists want to measure the actions of a brain region, they still do not know from the outset exactly where they have to place the cable ends with the electrodes. That is why they prefer to place more electrodes in the brain and then see which of the connections provide useful signals. That can be ten or 15 out of 100 electrodes.

"If you go there now with 100 or 1000 electrodes into the brain, you will get better and better. Then you have between ten and 50 information channels for evaluation instead of maybe only two options. Of course, over time you get closer and closer to something like mind reading," explains Pascal Fries, Professor of Systems Neuroscience at Radboud University, Nijmegen, Netherlands, and Director at the Max Planck Institute for Neurobiology in Martinsried near Munich.

In order to provide the researchers with chip implants and wafer-thin brain cables, a research group led by Stieglitz spun off CorTec GmbH in Freiburg ten years ago. With their expertise, Stieglitz and Fries are still part of the scientific and technical advisory board.

The company's flagship is the fully implantable so-called Brain Interchange System. It can both measure and stimulate brain activity in long-term use. The electrical impulses from 32 electrode cables are digitized in the chip under the skullcap and then transmitted wirelessly to a computer. The computer's software is programmed in such a way that the system can control itself by reacting to a certain brain activity with a precisely dosed, adapted stimulation.

A year ago, the company, which is now also active in the USA, concluded a financing round in which it was able to raise an impressive 13 million euros. The investors included the Strüngmann family's family office, founders of the pharmaceutical company Hexal and the Ernst Strüngmann Institute, of which Fries is also director.

Deep brain stimulation, in which the electrode cables penetrate through the cerebral cortex into regions located far away from the brain, is a particular challenge. Parkinson's disease is already being successfully treated in this way. Experiments have now also succeeded in relieving obsessive-compulsive disorders and thoughts or severe depression. It is not far to the control of emotions, which are located in the amygdala, the almond kernel complex in the brain, which plays an essential role in the regulation of emotions and the sensation of feelings. Fries suspects "that this could certainly be a target site for future interventions".

Then it wouldn't be too far away from reading out thoughts. "If impulses are derived from suitable locations in the brain, it is already possible to say very precisely today whether a person imagines one or the other of two images," Fries informs. This means that researchers are of course still a long way from being able to "see" the colors associated with the image or the associated memories from brain waves. "But of course we would come closer to this if we could transport impulses from more locations in the brain with more channels," says Fries. "This is basically the way to read the brain."

Of course, all this also raises ethical questions, for example about the protection of brain data, but also about data that provide clues about a disease or a state of mind. Stieglitz is quite clear on this point: "We should see that there are good framework guidelines that are not dependent on the will and financial needs of individuals, including patients," he emphasizes. "Not that we get into trouble, that somebody sells his data because he has some advantage from it."

There is still plenty of time for that. Stieglitz is convinced that "several generations of researchers will have to do research before machine reading can take place. To illustrate how difficult the path to knowledge is, he uses an example: "If I throw a car unscrewed in front of your feet, you won't be able to drive anywhere with it. So the research question for the future is: How do I get the data together and what knowledge do I need to make sense of it? Ultimately, it's not a matter of 1000 individual parts to stay in the picture, but rather of measuring about 100 trillion communication connections that are active in a human brain" ®

This is how our brain works.

The human brain consists of about 86 billion neurons, the nerve cells. Brazilian neuroscientist Suzana Herculano-Houzel counted this number fairly accurately in 2008 for the first time in the history of brain research. 16 billion of them are located in the cortex, the thick bark that surrounds the cerebrum and cerebellum and looks like a walnut with its furrows and folds. This is where consciousness and the ability to think logically and abstractly lie.

However, none of these regions is solely responsible for a specific ability. Each of the brain cells in turn has up to 10,000 connections - synapses that cooperate with both neighbouring and distant cells. In total, there are probably about 100 trillion networked connections that control human thinking in addition to bodily functions.

Although this incredibly complicated organ accounts for only two percent of the body's volume, it consumes - in order to function smoothly - 25 percent of all the energy that the body burns every day. That is around 500 kilocalories per day. Expressed in electrical power: just 25 watts. By way of comparison, supercomputers would require 50 to 5,000 times as much electrical power, depending on the model, for as many computing operations as are performed in parallel in the brain at any given time.

The technique of neuroscience.

In their interventions in the brain, neuroscientists work with cables that are about 0.02 millimetres thick - that is one sixth of the diameter of a human hair. Several conductor strands are combined as flat cables in a thin, particularly flexible foil, which can be four to five centimetres wide, depending on the number of conductor strands. "But we also stack strips two millimeters wide on top of each other. This is thinner and can be passed more easily through the cranial bone," explains Thomas Stieglitz.

More cables are often laid in the brain than are ultimately needed. The superfluous cables remain in the brain of the test person. "None of the materials are toxic," says Stieglitz. "Once the body has completed the foreign body reaction, the healing, the wires and chip remain stable."

The electrical signals from the brain are transmitted via a watertight connection to sensitive microelectronics in a chip that lies in a very flat, watertight housing under the roof of the skull. There, the received impulses are digitized and then transmitted either via a cable through the skull bone or, increasingly today, via a Bluetooth radio connection to the outside and to a computer.

Because of the now extremely miniaturized electrodes, the brain does not seem to react actively to such an implant. If cables and electrodes exceed a certain flexibility, the brain apparently can no longer feel them.

Opinionleader Christian Klein 99
With its rules on taxonomy, the EU will initiate…

How to earn it Cornelia Knust 148
Expansion. The Thannhuber family of entrepreneurs…

How to earn it Klaus Meitinger 104
Innovation. The only effective climate protection…