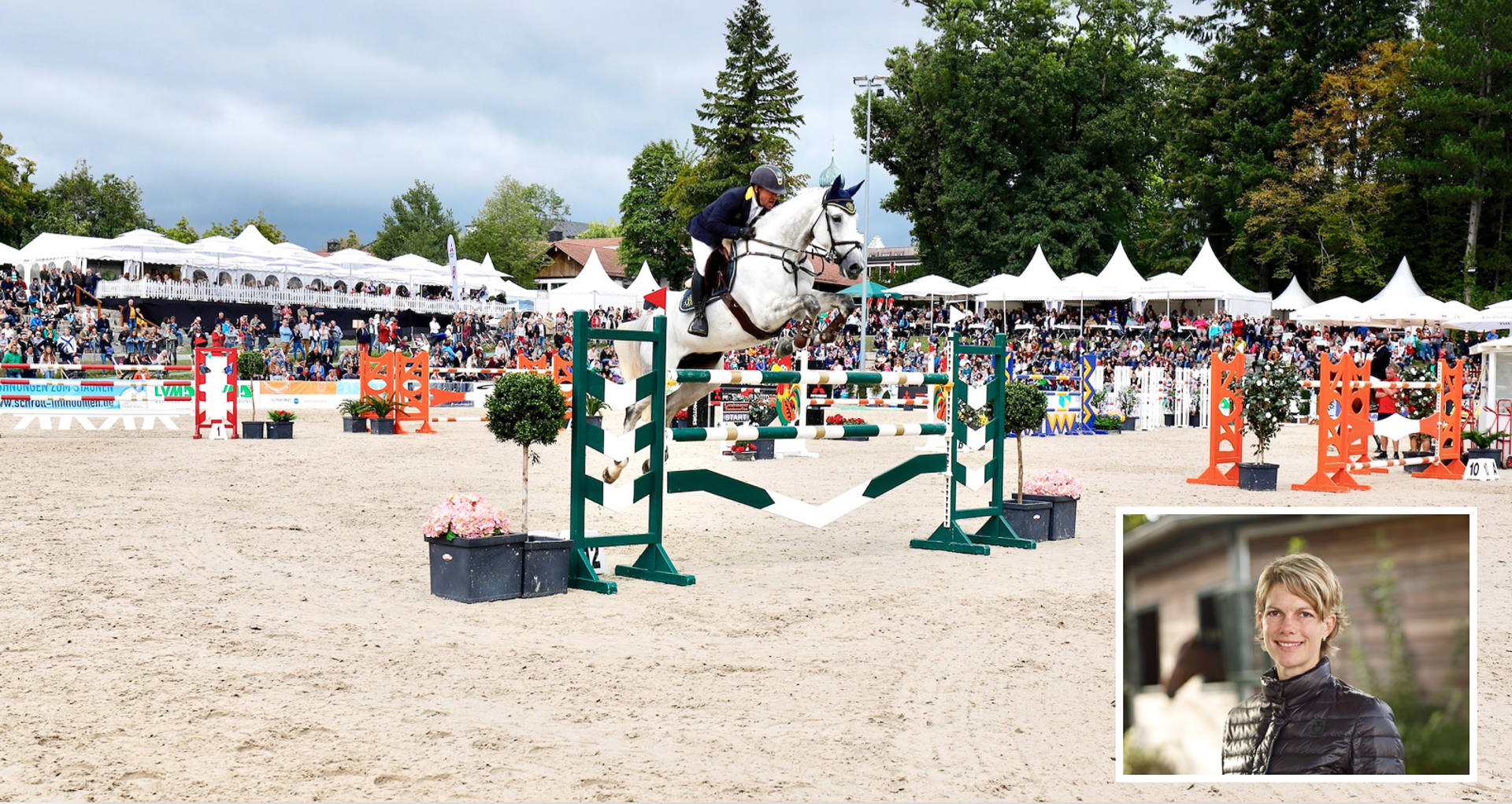 Equestrian sports. The equestrian gene is in the blood of the Magalow family. Konstantin Magalow's father founded the equestrian farm Ising at the Chiemsee, and Magalow himself made it famous. Daughter Sylvia and her husband Dietmar Gugler are now setting new standards: expanded riding facilities, a first-class training concept and tournaments for leisure riders to top athletes.

"It was always clear that I would come back here," smiles Sylvia Gugler with a view over the dressage arena and the Chiemsee, shining in the sunlight. She spent large parts of her childhood here, in the village-like Upper Bavarian idyll of Gut Ising, which the Celts once founded and which the Romans continued to settle along their army road.

Since 1934 the fate of the estate has been in the hands of the Witt-Magalow industrialist family. In the future Sylvia, the elder daughter of the 79-year-old landlord Konstantin Magalow, will manage it. In recent years, the trained hotel manageress and master of horse management has successively taken over, together with her husband Dietmar Gugler, a former national trainer of young people and a great figure in equestrian sports, the complete responsibility for the riding school of the estate.

A brief look back must be taken to understand the unique location of Gut Ising. "My life in the mid-1980s mainly took place within this radius: a few steps forward to the neighbouring grammar school and boarding school Schloss Ising, a few steps back to the riding stable," recalls the now 43-year-old successful show jumping and dressage rider. "Otherwise I moved freely over the grounds, to the lake or through the woods. If not one of the ever-present building sites of my construction-mad father stopped me." But it was only in this way that on the 170 hectare large area with seven manor houses next to the old manor house, what today's life at Gut Ising is all about: a harmony of nature, sport, culture and enjoyment.

It wasn't an easy road. When his brother Alexander, who ran the estate until then, died unexpectedly, Konstantin Magalow was faced with a big decision in 1984. "We lived in Munich until then," says Sylvia Gugler. "My father was in the management of our family business Witt, the mail order company in Weiden, and was ambitious as a national show jumper. He travelled a lot and was successful internationally. Nevertheless, there was no doubt in his mind: the estate had to go on. As a 44-year-old, he completely changed his saddle. We moved to Chiemsee, and my father became a hotelier." Thanks to his tournament experience, the new lord of the manor knew renowned studs, racecourses and riding schools at home and abroad. So it was obvious to establish all branches of equestrian sport at Gut Ising. "At the same time it was also important to my father to provide variety and to preserve our traditional hospitality. Because riders like to celebrate well and with pleasure."

Following this maxim, the entrepreneur developed the picturesque place into a hotel with 105 rooms, suites and apartments in a stylish mix of modern, rustic, antique and romantic elements. In addition to the large riding facility and the existing stables, over the years Konstantin Magalow created a golf course with driving range, indoor tennis courts, numerous banqueting halls and event rooms for all kinds of occasions on the grounds, by the lake and in the forest.

In 2011, an eighth house was added to the ensemble with a spacious spa and wellness area. The most recent addition is the Italian restaurant with sun terrace, which opened in 2018. It is integrated into the highlight for equestrian fans: a new 27 by 69 meter, fully glazed hall with a wide view over Lake Chiemsee. The success proves the concept of successive expansion right. "Over the past ten years, our annual sales growth has been 6.5 percent."

This continuity in the company's development is also due to the successful succession process. "Overall, the question of succession was a very natural, harmonious development process for us. Our father talked about this with my sister Nicola and me, who was the most difficult one, at a very early age," Sylvia Gugler remembers. "We were 16, 18 years old. The fact that Nicola suffered from a massive allergy to horse hair unfortunately made a future on the estate impossible for her. But for me, from then on, the prospect was clear."

Of course, the father is still in charge, but he is withdrawing step by step from the operative tasks. "This began ten years ago when he placed the management of the hotel in the hands of our hotel manager, and found its conclusion in 2018 when he handed over the management of the riding school to us. He now has more time to enjoy the relaxing aspects of the estate himself - and to continue planning," explains Sylvia Gugler. Her husband Dietmar Gugler is the ideal sparring partner for him. He was the national coach of the juniors and the Young Riders for ten years from 2001. And his company "Gugler Sport Horses" is in demand internationally when it comes to training, education, buying and selling show horses. "He has visions and is as keen on building as my father. The times of change should never end like this on the estate."

Much of the facility, says gugler, has already been redesigned, overhauled and expanded according to their ideas in the past few years until the handover. Thus, there is now a training ground for every equestrian: Three indoor riding arenas are equipped with completely new grounds of the highest standards, an eventing course with a canter racecourse is available, four spacious grass and sand jumping arenas as well as miles of avenues and extensive pastures and paddocks are ideal for endurance training sessions or a leisurely dry ride after the dressage lesson. "In order to offer the youngest leisure riders even more, we have also added more ponies for schooling," she underlines her commitment to the youngsters.

"My father no longer rides himself, but the weekly theory lessons with the children he holds with enthusiasm. The next big step would then be to integrate riding as an integral part of the school lessons in the neighbouring Schullandheim Schloss Ising. A sports grammar school with a variety of sports activities would be great! This way, prospective young professional riders would also be well provided for by the boarding school, the school and our intensive training". This is still a dream of the future, because the discussions for this are only in the early stages and the official hurdles and processes cannot be estimated.

The passionate rider emphasizes that it is not always just about titles and trophies. "Everyone who attends the riding school should first and foremost have fun with the horses and should be able to develop their skills individually according to their needs. With her team of three additional riding instructors and four riders, she focuses on a relaxed, friendly atmosphere and state-of-the-art training techniques. "We lay the foundation for dressage work as well as for skill riding or take care of balance and rhythm in show jumping." Top athletes train and therefore sometimes live on the estate for months on end. Recreational riders and students from the surrounding area travel to the estate for special training weeks with top national trainers, for tournaments or simply for holidays with their own horses. "It's ideal that everyone gets their money's worth," says the future landlady, describing a classic family constellation: "The mother rides her own horse and relaxes in the spa, the father plays golf or goes sailing, the children play tennis or keep busy with the ponies and go swimming by the lake - and for dinner they meet in one of our restaurants."

// Heinshof, equestrian farm in the Lüneburg Heath outside the gates of Hamburg in Egestorf, Lower Saxony

// Gut Hohenkamp in the middle of the Lippeauen von Dorsten nature reserve in Münsterland, North Rhine-Westphalia

// Reit und Sporthotel Eibenstock, in the heart of the nature park Erzgebirge/Vogtland, Saxony

How to invest it Gerd Hübner 205
Blockchain. The digital representation of…

How to invest it Threadneedle Management Luxembourg S.A. 198
Small Caps. Shares of smaller companies, they…

How to earn it Mariella Bauer 190
Handmade. Instead of rapid growth, the Munich…

How to earn it Yvonne Döbler 181
Expansion strategy. In 18 years, Wolfgang Trier,…