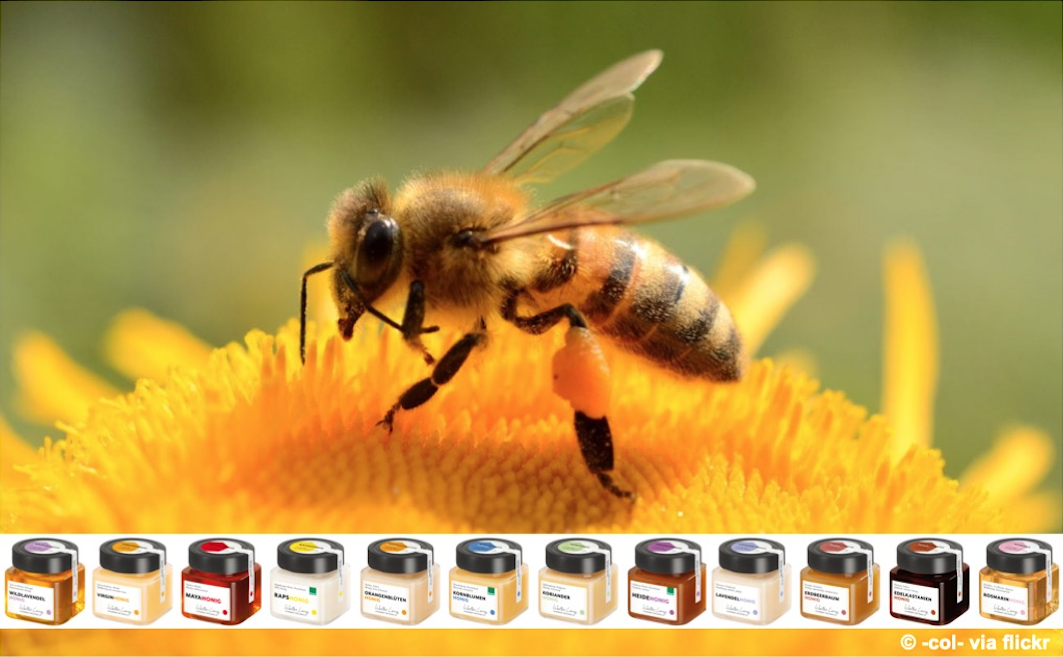 Pleasure. In the 1970s, Walter Lang decided to become self-sufficient. He soon became one of the pioneers of the organic movement in Germany. What about today? Today, Walter Lang GmbH is the market leader among Europe's organic honey importers.

"I'm stuck with honey," laughs Karin Lang, a trained food technician. "And not just there," she adds with a smile. The 50-year-old company and family spokeswoman is married to Gerrit, the son of the founder of Walter Lang GmbH. Together with him and his sister Theresia Lang, she now runs one of the largest organic bee farms in Germany, Sonnentracht GmbH. "We are indeed a wonderful little family of bees."

The history of the Lang family business begins in 1973, when Walter Lang, the then 30-year-old father of the family, is concerned about the origins and quality of the most common foods. The industrialisation of agriculture, with all the associated fertilisation, seed modification and pesticides, is just picking up speed.

The trained chemical engineer from Bremen does not like what he sees. "He wanted genuine, natural, better food," is how Karin Lang sums up her father-in-law's motivation. "Above all, he was interested in a healthy diet for his little son Gerrit. Soon it became clear to him: "This is only possible as a self-sufficient person."

It's not that simple, though. Self-sufficiency costs time, makes a lot of work. And where's the money gonna come from to make a living? Walter Lang finds the key to this in his favourite holiday region, Provence. There he gets to know lavender honey and is fascinated. "The taste alone enchanted him, but above all he liked the work with the bees that create this natural product."

Walter Lang learns everything he needs to know about beekeeping and starts a small beekeeping business in his French holiday home. At the same time, he founded a self-sufficient idyll, also with bees, on an old farm in Lower Saxony. The business plan: Long lives and works with his family on the farm, in the sideline he distributes the first products from his own production. "My father-in-law experimented and laboriously handcrafted his first fruit slices from honey and dried fruit in a specially constructed press. Later he added nuts and developed muesli, biscuits and pastries."

Walter Lang hits the nerve of time. The followers of the newly emerging natural food movement are enthusiastic. The Allos trademark is the result of a sideline acquisition. It sells organic honey and organic products. "Walter Lang did some pioneering work for thirty years with Allo. On the one hand, he was significantly involved when it came to establishing the term 'organic' in Germany and to defining the guidelines for species-appropriate beekeeping, which today apply throughout Europe. On the other hand, on his travels to beekeepers all over the world, he repeatedly demonstrated a flair for successful products".

Amaranth, the South American miracle grain of the Incas, and an alternative sweetener, the agave syrup, have long been discovered. "It's hard to imagine the shelves of German health food stores without these two ingredients today." Allos is developing accordingly successfully. Nevertheless, Walter Lang sold the trademark in 1998. "He wanted to go back to his roots, to honey. That's where his passion lies."

Together with his children Gerrit, Theresia and Jakob, who gradually join the family business after completing their training, he develops a plan for the future. "The enthusiasm for honey is in the genes of all Langs." Thus Walter Lang starts again in the year 2001 anew. He founds his honey import company, Walter Lang GmbH, as well as Sonnentracht GmbH, an organic beekeeping company operating in Germany.

The environment is favourable. The demand for organic honey has been growing steadily since the turn of the millennium. "Today, the share is around ten percent. That is 10000 out of a total of 100000 tons that the German market needs of honey. Germany's beekeepers cover only 20 percent of this." After all, 400 tons of organic honey come from the 6000 peoples of the Sonnentracht-Imkerei, which generates sales of 1.5 million euros with it - around ten percent of the company's gesamten Absatzes

In order to meet demand, Lang needs trustworthy import sources. He uses his contacts from Allos times and expands them continuously. "In quantitative terms, Romania, Brazil, Chile and Mexico are the most important of our twelve partner countries," says Karin Lang, describing the business area of Walter Lang GmbH, whose management remains with Walter Lang. "In the meantime he is also supported by his son Jakob as honey master and his wife Cigdem Ercan in purchasing.

Today, an average of 8000 tons of organic honey are imported to Bremen every year, more than any other specialist importer in Europe. In total, the import trade and the beekeeping of Walter Lang cover the largest part of the German organic honey demand and generate around 50 million euros annually.

For the honey family, however, business is not the first priority. It's about the big picture - bees, honey, people and the environment.

"Every country has a different tradition and relationship to beekeeping. Our mission is to implement species-appropriate beekeeping according to Bioland guidelines at all local partners. Bees are not only essential for pollination, they also contribute to the preservation of plant diversity in the respective region. Beekeeping therefore stands for active environmental protection worldwide", Karin Lang outlines the importance of beekeeping.

It is also a unique opportunity for local people and society to join this vision. "Without prior training, anyone can learn beekeeping and secure their livelihood in unique regions, some of which are inaccessible to intensive agriculture. The rural exodus can be prevented by the income from honey in some places."

Thanks to the importers from Germany, 36 independent professional beekeepers with a total of 4600 bee colonies now have their income in Romania. In Brazil it is a family business, which keeps 1400 bee colonies in the third generation. From the Mexican Yukatan Peninsula, the land of the Mayas, a cooperative consisting of 120 indigenous beekeeper families from 17 regions supplies the honey of 5500 bee colonies.

"We are regularly on site, inspect and support, but also mediate between farmers and beekeepers, especially when pollination is the order. And last but not least, several comprehensive laboratory analyses are required in order to determine the quality of each individual harvest and exclude unwanted ingredients - because there is always a residual risk."

It is not for nothing that the motto "Honey is Money" applies in the worldwide honey industry. Because the margins are comparatively high, honey has generally been one of the ten most counterfeit foods for years. It is a cat-and-mouse game between counterfeiters and controllers: bees are fed with sugar water, honey is taken too early and unripe, honey is dried by machine, heated strongly, stretched with various sweeteners or extremely filtered.

The bitter result is that honey at the sales counter is often no longer a natural product. "To exclude this is a clear added value, which we achieve in comparison to conventional, industrially produced honey with our organic honey", emphasizes Karin Lang. "In the further processing up to the filling we handle the honey carefully without heat or filter, so that it remains as natural as possible.

Customers who buy organic goods are often very conscious connoisseurs who appreciate specialities such as honey varieties and accept that organic honeys cost between 20 and 30 percent more than industrial competitors. Only with the in-house brands "Walter Lang" and "Serapis Culinar" the honey lover has the choice between more than forty different honeys. From Maya the Bee to Mayan honey. From sweet to bitter. From mild to bitter. From light to dark. From liquid to creamy or sandy-crystalline. "With natural honeys, it is possible to taste not only the variety and the regions, but even different vintages."

Their challenge, explains Lang, is now to make this palatable to a broader demand layer. "Because the gratifyingly increasing interest in bees and insects is not yet directly reflected at the breakfast table. The total consumption of honey is even tending to fall."

This is why the experts at Walter Lang work together with their customers to put together the right honey assortment. Acacia or multi-flower honey as an introduction are complemented by fruity, rich, exotic flower honey cuvées.

"The combination possibilities are almost inexhaustible and definitely depend on the regional seasons and harvests per season. So it stays exciting every year. Honey is one of mankind's oldest, purest and most valuable foods. If we work with nature instead of against nature, it will stay that way." ®

The game of supply and demand in New Zealand is a very special one. This is where the Manuka honey, which is considered to be extremely healthy, is produced from a tea tree plant that only exists here.

"Every year anew, as soon as harvest quantities and quality are foreseeable, there is a real hype. Then the hunt starts among the traders - who gets how much at what price?" says Karin Lang. Half a container filled with 300 kilo barrels of the finest Manuka honey could then bind half a million euros. "A 275-gram glass for the customer then costs 35 euros or more to sell. A borderline development," she analyses critically. After all, every honey is beneficial to health in its own way and should remain an affordable food for everyone. "A domestic multi-flower honey of the same quantity costs about six euros, for example."

"Only healthy and strong peoples, with whom the honey may ripen in the combs, supply a product with high quality , outlines Gerrit Lang the wichtigsten Aspekt with the production of bio honey. However, since it cannot be prescribed that bees fly only to organic farmers and not to the fields of conventional farmers, it is impossible to exclude 100 percent of pollutants. Therefore, very restrictive thresholds apply for organic honey. Laboratory analyses ensure that these are not exceeded. In order to obtain the "Bio" label, the beekeeper's method of operation and his species-appropriate keeping of the bees are therefore measured above all. The following seven principles apply:

// 02: Respectful treatment of bees and their queen

// 04: Use of natural and food-safe materials and equipment

// 05: Only use of biological bee medicines

// 06: High demands on quality, taste and naturalness of honey

How to invest it Gerd Hübner 127
Blockchain. The digital representation of…

How to invest it Threadneedle Management Luxembourg S.A. 126
Small Caps. Shares of smaller companies, they…

How to earn it Mariella Bauer 114
Handmade. Instead of rapid growth, the Munich…

How to earn it Yvonne Döbler 110
Expansion strategy. In 18 years, Wolfgang Trier,…