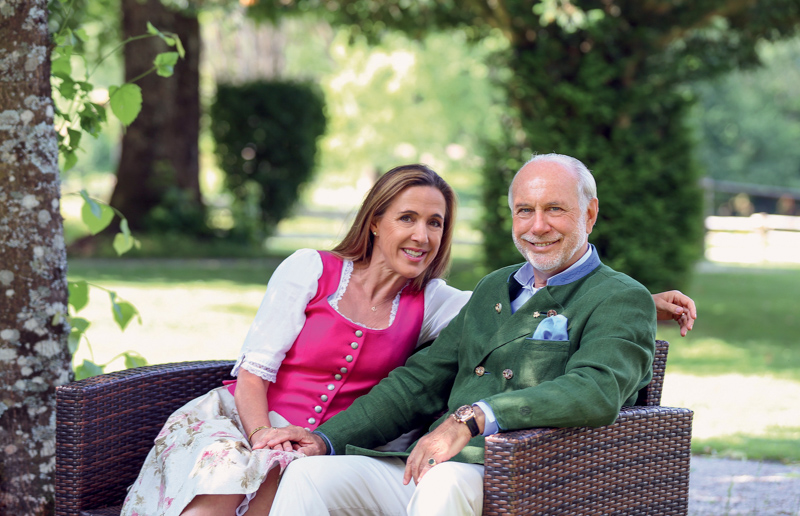 "To be allowed to host is something wonderful", says Susanne Gräfin von Moltke, "you can invite the whole world at any time, day or night".

Together with her husband Klaus-Dieter, the entrepreneur runs the Park-Hotel Egerner Höfe am Tegernsee and the Gut Steinbach in Reit im Winkl. The couple employs 200 people and generates an annual turnover of around 15 million euros. Countess von Moltke says that the only effort is that it is an all-round job. "365 days a year, even on holidays like Christmas, we're never off."

Until the beginning of the 1990s this was different. Klaus-Dieter von Moltke worked as a management consultant. But then, since his family owned various clinics, he wanted to build a children's rehabilitation clinic on a plot of land in Rottach-Egern on Lake Tegernsee. The congregation refused. However, he pointed out that Moltke could build a hotel instead of a clinic.

As a consultant he spends 200 days a year in the hotel, Moltke thought, he already had one or the other idea. Looking back, this was the birth of the Park-Hotel Egerner Höfe, which over the years has developed into a top destination on Lake Tegernsee.

Since 2013, Countess von Moltke has been responsible for communication and marketing. As Managing Director of a Frankfurt advertising agency, she has been responsible for clients such as Procter & Gamble. She can benefit from her professional experience. "There are some similarities between the advertising industry and the hotel industry." In advertising, consultants, copywriters and graphic designers have to be brought together under one roof - in the hotel business they are cooks, receptionists and chambermaids. "Nothing can be achieved alone, only together."

Since 2011, the Steinbach estate near Reit im Winkl has also belonged to the group of companies. The couple has invested more than 20 million euros, including 50 hectares of land and forest with 60,000 square metres of arable land, to purchase this property. For this to be worthwhile, it is clear to the Moltkes early on, they must become known beyond the German borders. "It's about reach," says the marketing expert, "and membership in an association such as Leading Hotels or Relais & Châteaux is indispensable."

The Park-Hotel Egerner Höfe has therefore been a member of Relais & Châteaux since 2013 and the Steinbach estate since 2019. Growth from Germany is all very well, but it gives us access to the whole world," explains Countess von Moltke. The recording functions according to strict selection criteria. Inspectors and gourmet testers, some of whom also work for the Restaurant Bible Guide Michelin, take a close look at the hotel and the restaurant. "Over 300 criteria are queried." The not inconsiderable membership fee is then determined by the number of rooms. Membership in the association is worthwhile, says Moltke, and points to an increase in the annual occupancy rate of the Park-Hotel Egerner Höfe by five percent since it joined Relais & Châteaux.

The hotel association and the German middle class seem to have a good connection anyway. Around 30 percent of the 22 German Relais & Châteaux member companies belong to medium-sized companies or entrepreneurs from other sectors. Burg Wernberg is owned by the electronics family Conrad, and Grand Village Resort & Spa on the Baltic Sea is owned by Jan Henric Buettner, former head of AOL Europe and risk fund manager. Hollywood celebrities can also be found here. Richard Geres Bedford Post is located one hour from New York, surrounded by forests.

As Philippe Gombert, president of the exclusive association, points out, one of the most important criteria for being accepted into the Relais & Chateau circle, along with regional ties, is that travellers feel as if they are being received by a family in the hotels. With their philosophy, the von Moltkes Relais & Châteaux are therefore the perfect Relais & Châteaux hosts. ®

Founded in 1954, the Relais & Châteaux hotel association today consists of 580 individually run family hotels and restaurants in 60 countries worldwide. There are 22 Relais & Châteaux members in Germany and 13 in Austria. In 2017, Relais & Châteaux generated a total of 23 billion euros, divided equally between overnight stays and gourmet restaurants. The membership fee depends on the number of rooms. According to the association, for example, a house with 20 rooms and nine suites will cost around 18,000 euros a year and a gourmet restaurant with a turnover of more than two million euros a flat rate of around 7,000 euros.

The members of Relais & Châteaux commit themselves to a manifesto presented to Unesco in 2014 with the aim of protecting the local heritage and the environment. The individual family businesses are supported by the association in finding staff and rotating them within the group. When the season comes to an end at one end of the world, the employees find employment at the other end. The association is structured in country delegations, which can control the actions market-specifically in each case.

Countess von Moltke has been the association's representative in Germany since 2017. According to Moltke, one of the most important distinguishing criteria from other hotel associations such as Leading Hotels is the regional anchoring and individual management of the member hotels. In addition, since its foundation, value has been placed on excellent cuisine.

The association registers a total of 368 Michelin stars worldwide - including the three-star chef Claus-Peter Lump from Restaurant Bareiss in Baiersbronn. In March of this year, member Juan Amador was also awarded the third star in Spain. Star chef Thomas Kellermann has been cooking in the Dichterstub'n of the Egerner Höfe since mid-2018. "The star cuisine is not only luxury for the guest", laughs Countess von Moltke, "but also for the entrepreneur".