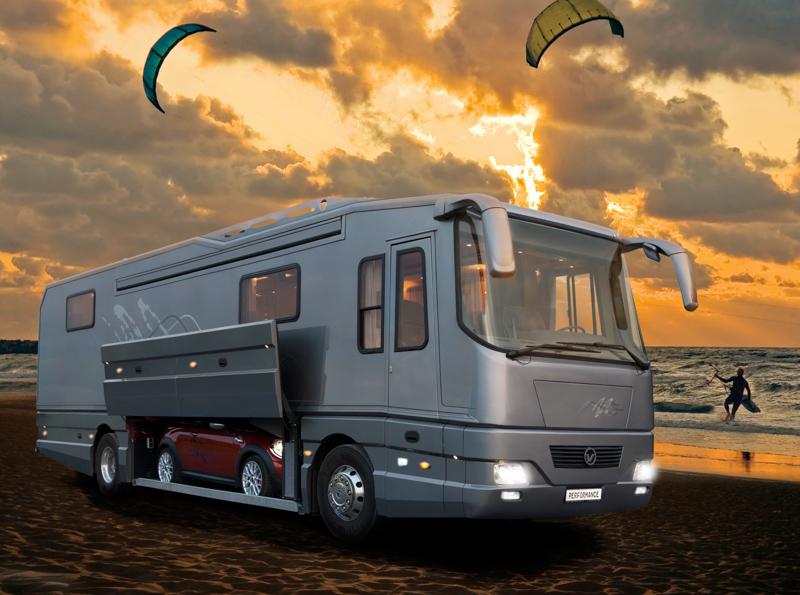 Travel. More and more entrepreneurs enjoy the feeling of freedom and independence in a tailor-made motorhome. Beim Trendthema Land-Yachting are the imagination (almost) no limits set.

The middle garage opens with a slight buzz. There, in the belly of the truck-sized luxury liner, a mini is parked, which is now hydraulically extended standing on a plateau, ready for an excursion along the Spanish Mediterranean coast. When the second car is on its way, the garage platform becomes a covered terrace.

The motor homes of the youngest generation no longer have much in common with their forefathers. They are dream houses on wheels, built for a demanding clientele.

Most of his customers, says Jochen Reimann, managing director of the motorhome manufacturer Morelo in Schlüsselfeld near Bamberg in Upper Franconia, are over 55 years old, many of them private individuals, former entrepreneurs or business executives. "It's like real estate: there's no interest, so many people use their capital and treat themselves to something special."

A glance at the delivery times provides an indication of how well the industry is doing at the moment. Who wants to call such a vehicle his own, needs patience. At Morelo, for example, it currently takes between six months and one year for the dream lock on wheels to be completed. Other manufacturers of luxury liners have the same picture: moving houses are in demand, waiting times are often long. And because it is not to be expected that this leisure trend will slow down, investments will be made in the industry. "We are currently building a new service and maintenance center for three million euros," says Reimann.

Jochen Reimann knows his way around diesem Segment like hardly anyone else.

Father Helmut is considered a caravan pioneer. He had founded a company in 1981 that produced parts for folding caravans. Helmut Reimann bought a factory from the caravan manufacturer Knaus Tabbert in Schlüsselfeld. Two years later he started building motorhomes, which he called Concorde. When plant manager Johannes Schell leaves Concorde in 1997 to found his own motorhome company Phoenix, he can convince many Concorde colleagues to come along. In 2003 the Reimann family sold the company, the youngest son Jochen remained managing director until 2009. But then the chemistry with the new Kühn family is no longer right.

Concorde and Jochen Reimann split up - and he founds a new Reimann motorhome company in 2010. He calls Morelo his start-up, an artificial word from Mobile, Reimann and Reinhard Loehner, his co-managing director and colleagues from Concorde times. "We were close to the customer, we had the knowledge and we knew: We can do it," says Jochen Reimann.

Nevertheless, Reimann does not remain the owner for long. Right at the beginning he has to look for an investor because the banks do not give sufficient loans. In 2011, the Dutch private equity company HTP, which had also taken Tabbert under its wing two years earlier, will participate. "This is why today Concorde, Morelo and Phoenix together produce around 70 percent of luxury motorhomes throughout Europe. And all three are sitting in Schlüsselfeld," smiles Reimann.

It is not for nothing that the liner manufacturers call themselves manufactories. You can't do it without a lot of manual work. Morelo, for example, processes more than 700 parts from its own joinery for the vehicles, of which the team produces two a day. On average, the same number of working hours are spent in a Morelo mobile. "Customers expect a very high standard," explains Reimann. A genuine glass shower as spacious as at home, modern seating, comfortable beds, ample water supply, solar panels, satellite antenna and at least one large LED smart TV. The Morelo managing director calls his concept "luxury in series".

Other providers are placing even more emphasis on individuality. At Vario Mobil, the design team develops a new type of furniture construction if required. And if desired, the wooden elements can even be made from a single trunk so that no inappropriate transitions occur and the grain merges into one another. A high-end mobile, tailor-made, every detail individually adapted to the customer's wishes, every vehicle unique.

Above all, storage space is in demand. After all, motorhome office radios often spend half a year on the road. Who then up to 30 square meters of living space is not enough: At the touch of a button, the interior can be enlarged within a few seconds. Wall-outs, i.e. retractable wall elements, provide an additional five square metres of space. You can also order electrically adjustable leather armchairs, queen-size beds, automatically retractable and extendable kitchen counters, ovens, freezers or washing machines. The bathroom is reminiscent of a wellness temple with a rain shower, high-quality imitation marble and towel heating.

The Mobilista do not want to do without the comfort at home. Land-Yachting is the mobile part of the phenomenon known for a long time under the name Glamping: Glamour and camping, adventure holidays in nature, without renouncing the usual amenities. Softly splashing waves behind palm trees, an orange-red sunset, every day a new place, a new adventure, individual, self-determined.

The land yachts are between seven and twelve metres long. Because they are difficult to move through narrow inner cities, they usually also have a garage - usually at the rear. "Lamborghini, Ferrari, Porsche - we have already built garages for all these vehicles," Reimann explains.

As much as the manufacturers strive for individuality in the details, there are not so many possibilities for the basic components to stand out from the competition. The basic vehicles come with Daily or Eurocargo either from Iveco, with Atego from Mercedes-Benz or with TKL from MAN. The situation is similar with refrigerators, toilets, windows or heating. This means that customer advice and design remain the key to differentiation. The latter is a matter of taste. Even if Reimann does not hide his joy about the latest award with the German Design Award 2018 for the Morelo Empire.

Because most customers had their driving license before 1999, they are allowed to drive colossuses up to 7.5 tons with their normal car license. For the heavier liners with a total weight of ten tonnes, however, a truck driving licence is then required. Several drivers still bring it with them from their time in the Bundeswehr. "Women at the wheel are extremely rare," says Reimann.

Many owners of luxury liners are real motorhome professionals. According to Reimann's experience, 95 percent of them already owned a motorhome in a similar price and size class. You swear by this way of traveling. And they are happy to share their experiences with other enthusiasts at joint meetings. Legendary is the "Morelo open". Once a year, 450 vehicles of all brands are parked on the company premises. Factory tours are offered, experiences are exchanged, friendships are made. There is even a joint meeting of the Morelo- and Concorde-friends.

There the details of the equipment are discussed - the must-haves and the nice-to-haves. Underfloor heating, for example, is usually standard equipment, but a special wine refrigerator often has to be ordered separately. The subject of talking shop is the electrics and the advantages of Japanese hobs. The tinted panes, which protect against overly curious glances, are also an issue.

Equipment that not only Reimann's customers appreciate. Of course, the entrepreneur is also regularly on the road in one of his vehicles. Sometimes it turns into a very long, very special test drive. "At minus 36 degrees Celsius at the Arctic Circle, the adventurer must be able to rely on his equipment. Of course I tried that myself there." ®

// Bliss Mobil: The motorhomes of the Dutch manufacturer are container-based expedition vehicles. The superstructures are adapted to common container dimensions for worldwide shipment. They can be operated standing on supports, separated from the chassis and self-sufficient. Each mobile is equipped with solar cells. All systems are doubly protected by redundant construction. There is even a bulletproof version available on request.

// Concorde: The company is now the European market leader in the luxury motorhome segment. The flagship is the Centurion, which is twelve metres long and weighs 26 tonnes, equipped with 476 hp and six cylinders. Many technical installations can be controlled via app.

// Morelo: The Morelo mobiles cost between 150000 and more than 600000 Euros. Consulting is as detailed as when building a house. The concept is called "luxury in series". Es means that you can choose between different variants.

// Phoenix: Like Morelo and Concorde, Der Anbieter is one of the big three in the premium segment. Phoenix is the first manufacturer to be audited by MAN. The chassis conversions are carried out with original MAN parts. The company is one of the few manufacturers to also offer mobile units with alcoves.

// Vario Mobil: The company promises one hundred percent individuality. Therefore there is no vehicle configurator. If you like, you can enlarge your living space with up to three extendable slide-out oriels. An additional car garage is adapted to the desired second vehicle with centimetre precision. The range also includes Volvo chassis as a substructure.

// Volkner Mobil: With the "Performance", the patented lateral central garage is a real eye-catcher. Here the owner's sports car disappears discreetly. When extended, the platform can be used as a sun terrace. The specially developed system control monitors all aggregates. The interior fittings are individually adapted to the customer's wishes (price of the flagship Performance model: around one million euros).