Civil courage. The activist Jody Williams succeeded, which the United Nations was unable to do, in persuading the international community to renounce landmines. For this she received the Nobel Peace Prize almost 20 years ago. She's been touring the world ever since, shaking people up. Because what she can do, others can do.

"Hi, I'm Jody!" The American has a firm handshake. It goes from chair to chair, from row to row. Greet each individual in the auditorium, listener by listener. "Hi, I'm Jody!"

But everyone who has travelled to her lecture knows who she is. Jody Williams. For to hear them, men have come. A foundation from Northern Italy and the "Center for Peace" have invited to this event.

Jody Williams is an icon. She, a simple teacher from Vermont, New England, USA, received the Nobel Peace Prize in 1997. Together with the organization "International Campaign to Ban Landmines" she founded, she made a significant contribution to the fact that landmines are no longer used in many parts of the world today.

"I started from scratch," she says, "when I started in 1992, I had zero employees and hardly any resources. Five years later I ran a worldwide campaign and the landmines were outlawed worldwide." To date, 164 states have signed and ratified the agreement. 32 countries have not signed yet. These are Asian countries such as China, Bangladesh, Pakistan and Russia. Individual countries from North Africa such as Egypt or Libya are among them. And the United States.

"Why are you here?" asks Jody Williams again, and the heels of her red cowboy boots clatter on the parquet floor.

A man is here who is eager to see his home community produce tanks that have been sold to Russia and used in Syria to support Bashir Al-Assad's troops. Teachers are there who later want to tell their students about the encounter with a Nobel Peace Prize laureate. Lawyers have come to learn more about how international campaigns work. Isolated housewives. And three nuns who do not want to place earthly peace exclusively in God's hands.

This is Jody Williams' audience. The Nobel Prize was awarded almost 20 years ago, but Williams did not sit back and rest on his laurels. She's been touring the world for 20 years, shaking people up. To give them courage. To tell them, "What I did, you can do."

Jody Williams' central message is: Are you dissatisfied? Are you worried? Don't you agree with the way things are going? Well, do something. Get up. Unite. Say it's enough. You have the power to change things.

As soon as a critical mass of people gather together, change can take place. But there's always someone who has to start. An individual or a handful of brave people who others can then join.

"Do you remember the Google story?" asks Jody Williams in the round. Google, whose motto for years was "Don't be evil" and then turn it into "Do the right thing".

US-American reconnaissance and combat drones should have been able to identify and destroy targets such as people, buildings or cars by means of automated image recognition for quite some time. But the error rate was 40 percent. So the Department of Defense brought Google on board. Artificial intelligence should be used to improve the results. In the summer of 2017, Google signed a deal with the US Department of Defense. Project name: Maeven. After all, the Silicon Valley company had a lot of experience with artificial intelligence. His algorithms - and his scientists - should now work for the American military. In internal mails, Google demanded strict secrecy. Nevertheless, the deal went public - thanks to courageous employees. Twelve employees then resigned in protest. Another 4000 employees petitioned Google not to participate in the war business. 830 international scientists and ethicists criticized the leadership of Google in an open letter.

In the end, Google gave in. A few people had stood up and said: No. Not with us. Thousands more people had joined. In the end, a multi-billion-dollar corporation had given in.

As a result, the CEOs of 236 American tech companies undertook not to work for military purposes now and in the future. Thousands of scientists did the same to them. "That," says Jody Williams, "is activism. And that's something anyone can do, regardless of wealth, education, status or race. It just takes courage."

US football player Colin Kaepernick also showed courage when he knelt down about two years ago while his team sang the American national anthem before a match. The coloured player wanted to demonstrate against racism and police violence in the USA. Other footballers followed his example, kneeling down during the national anthem or raising their fists as a sign of protest. Suddenly racism in the USA was no longer a taboo, but an issue that moved society and against which it was prepared to fight.

Colin Kaepernick then received death threats from angry white fans and he lost his job. No club wanted to hire him anymore. But then Nike stood behind him. The US sporting goods manufacturer engaged Kaepernick for a two-minute commercial that was broadcast on time for the start of the new football season. And made a statement with it. That's another variation of activism.

For a long time now, power has not only been in the hands of politicians and heads of state. The real string pullers are the international, the global corporations. And - and this is the crucial point - they can be persuaded by the power of consumers to take a stand, to take responsibility and to influence politics. They can thus become a decisive factor. National interests are making it increasingly difficult for political actors to cope with the major global challenges. An example of this is the problem of global warming. In the past, the climate conferences of the United Nations have clearly shown where the limits of this institution lie.

"The influence of the five veto powers has now become far too strong," says Jody Williams. If Russia, the USA, China, Great Britain or France do not agree with a decision of the United Nations, they can prevent its realization - with a single vote. Russia and the USA in particular made extensive use of this right.

Just as the United Nations did not succeed in outlawing the use of landmines at the time, the fight against the climate crisis today requires action and initiative at other levels.

A good example of this is the Climate Action Summit, a non-institutional climate summit held in San Francisco in September 2018. Here it was not states that committed themselves to reducing CO2 emissions, but smaller, local players. The RE100 initiative, to which more than 150 globally active companies belong, has a similar goal. By 2020, they want to cover 100 percent of their energy requirements exclusively with renewable energies. Ikea will be there, as well as Coca-Cola, H&M and BMW. Or the "Under2Coalition", to which more than 200 local governments have joined and which was formed at the instigation of the governments of Baden-Württemberg and California. Or the "Global Covenant of Mayors", which includes more than 9000 mayors.

All these initiatives have made a commitment to voluntarily reduce CO2 emissions. From now on. In sum, they can achieve more than the cumbersome bodies of international institutions.

Capital - and its power - is also used today as a means and instrument. In 2012 the environmental activist Bill McKibben founded the so-called Divestment Movement. His concern: To persuade investors, shareholders, state and pension funds and even the churches to stop investing in companies that make their living from fossil fuels.

With success. According to McKibben, more than 7000 billion dollars have been withdrawn from fossil companies since the beginning of his campaign. The Rockefeller Foundation has transferred a billion dollar fortune, as has the Norwegian sovereign wealth fund. Many British and American universities have joined the movement, in Germany the University of Göttingen. The city of New York is on board, and Ireland is the first country in the world to have spoken out in favour of a complete withdrawal from fossil investments. Individual companies are also participating in the campaign. Allianz has not insured coal companies since May 2018.

The trend towards sustainable investments is also heading in this direction. In the meantime, more than 25 trillion US dollars have already been invested worldwide according to criteria that take environmental protection, social and societal concerns and good corporate governance into account. And the volume of financial products in which the classic criteria of yield, security and availability are supplemented by ecological and social aspects is growing at double-digit rates every year. In particular, the commitment - the dialogue with companies on sustainability issues - is gaining in importance.

Investors can achieve a lot if they pull together. The withdrawal of capital not only weakens the share price. Raising outside capital is also becoming more difficult. And social acceptance is dwindling. This reduces political and economic influence. The pressure to change behavior is growing.

The campaign "Who made my clothes?" is also about undermining social acceptance. While the divestment movement diverts capital from individual large investors, many small people want to make a big difference in this campaign. After the Rana Plaza in Bangladesh collapsed on 24 April 2013 and 1135 people - mainly textile seamstresses - were killed, fashion designers Cary Somers and Orsola de Castro founded the "Fashion Revolution" movement.

With the question "Who made my clothes?", they want to create awareness for the insecure and exploitative working conditions in the fashion industry and oblige manufacturers to be more transparent.

The campaign has now expanded worldwide. April 24 became "Fashion Revolution Day". Millions of people from almost 70 countries participate with events, flash mobs and posts. On this day they wear their clothes on the left to draw attention to the label "Made in ...".

It all began with two women worrying about who had sewn their clothes - who and, above all, under what conditions. Five years later, millions of consumers are asking themselves this question, forcing manufacturers to rethink their production chains.

"Change," says Jody Williams, "always begins with a problem or grievance being made visible and society beginning to develop an awareness of it."

Together with five other women who were also awarded the Nobel Peace Prize, Jody Williams founded the "Nobel Women's Initiative" in 2006. Their aim is to support women's groups around the world in their campaigns for humanity, peace, equality and justice through their knowledge and networks. 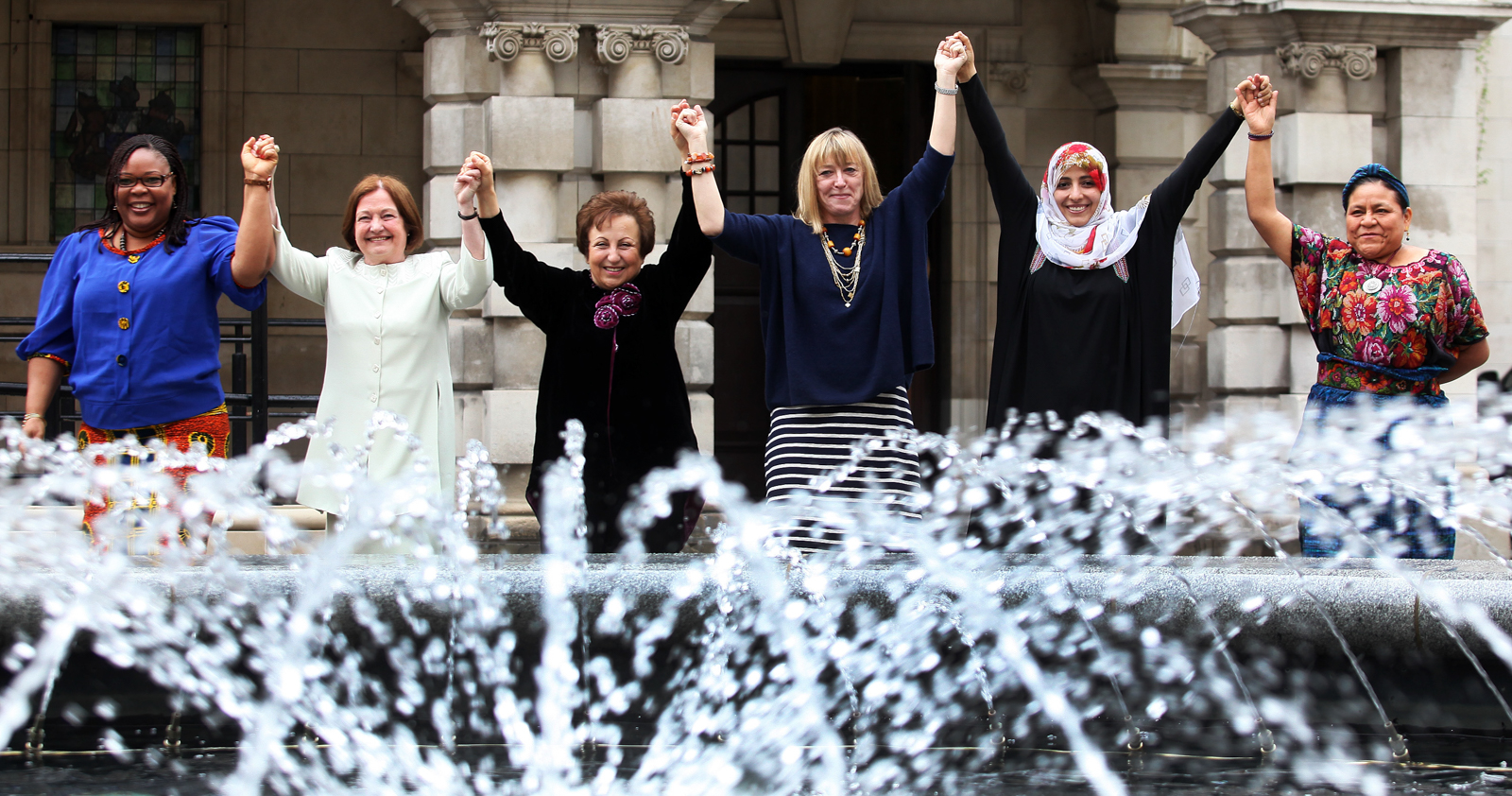 "We travel," says Jody Williams, "to the Democratic Republic of Congo, where rape is systematically used as a weapon against women. We tour Mexico and Latin America, the region where women are killed the most in the world. We visited the Rohingya in the refugee camps in Bangladesh." Jody Williams is certain that women are the key to peace. Supporting women and their movements worldwide means strengthening peace worldwide.

"Each one of you," says Jody Williams, "is part of a group that stands for a larger whole. Each of you can decide to continue as before. Or to use his influence in the group of voters, consumers, employees, employers, taxpayers, shareholders to steer things that are important to you in another direction."

The lecture is over. Jody Williams, just a moment ago bursting with energy, suddenly seems tired. I'm worn out. Once again the heels clatter their red cowboy boots on the floor. "Be brave," she says at the end. "Remember, you all have the opportunity to change the world." ®

How to invest it Threadneedle Management Luxembourg S.A. 122
Small Caps. Shares of smaller companies, they…