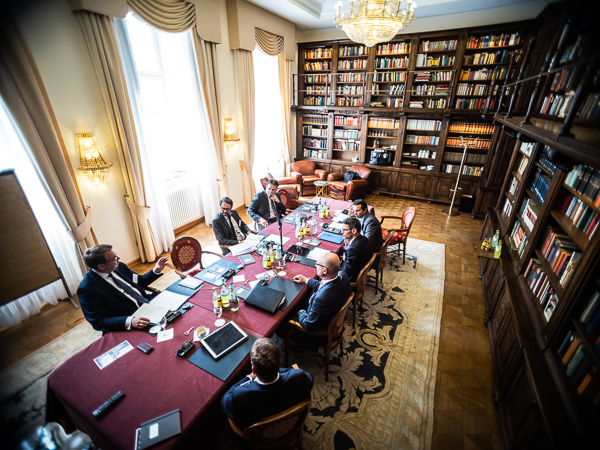 Monetary policy. With flows of liquidity and zero interest rates, the central banks have stimulated the economy and capital markets. Now they pull the reins slowly, but surely again. What impact will this have on the prices of the various assets?

"When the tide goes down, it'll show who went into the water without their swimming trunks." (US investor Warren Buffett)

The big monetary policy experiment goes into the next round. First, the central banks in the industrial nations had set their key interest rates at or below zero. Then bought bonds worth more than $12,000 billion. This corresponds to about 3.5 times the German national product. Der Effekt: Bond prices rose, yields declined. Debt capital became cheaper than ever, the prices of all values that could be paid with credit exploded formally. Und, the share prices also climbed.

Now the central banks have inserted den Rückwärtsgang . In the USA, key interest rates have risen since the end of 2015 from zero to currently 1.5 to 1.75 percent. And the central bank, the FED, has begun to slowly reduce the stock of bonds in its balance sheet. "This is a real game changer," says Max Schott from asset manager Sand und Schott.

On average, the round expects the US key interest rate to reach 2.75 percent at the end of 2019. That would be two further rate hikes each this year and in the coming year. In detail, however, opinions differ. Jakob Trefz, MLP Banking, can imagine a key interest rate of 3.25 percent by the end of 2019. "If the US economy doesn't lose some of its momentum, the FED will have some room to maneuver upwards." Martin Klein, Heidelberger Vermögensmanagement, opposes this. "We see less inflation growth and we are currently experiencing a slight slowdown in economic activity. The FED will take this into account by slowing down its pace. Ich sees the key interest rate at the end of 2019 at only 2.375 percent."

"Stephan Jäggle, Münster Stegmaier Rombach Family Office, explains: "At the moment, the FED is concerned with two things: "It wants to acquire the ability to act for the next crisis and slowly normalise monetary policy again. These headings also include the strategy of reselling bonds acquired under the Quantitative Leasing programme. "But with ten billion dollars a month, the FED is still very homeopathic," Schott reflects. "She would need two and a half to three years to halve the balance," calculates Achim Siller, Pictet. She does not have to sell everything: "But she will expand the volume in the next few months."

On balance, the US Federal Reserve received quite good marks from the Lerbach Round. "At least it has managed to get into the exit phase without causing turbulence in the markets," concludes Oliver Borgis, Weberbank.

// 06. What does the forecasted FED policy mean for the interest rate and equity markets in the USA?

The situation on the am US bond market in particular is explosive. Donald Trump will incur more debts in the future to finance his tax reform. This increases the supply of bonds. If the central bank reduces its holdings, if the relationship between supply and demand changes - won't bond yields have to rise significantly?

"Based on historical data, yields of four to 4.5 percent for ten-year US government bonds would be in line with current growth and inflation data," Jäggle calculates. "However, since the US inflation rate will peak at just over two percent, we should perhaps end up in the 3.5 to 4 percent range by the end of 2019," Siller suspects. "In this region," adds Jäggle, "US government bonds would again be very interesting for private investors worldwide. Then there will be enough demand to absorb the higher supply."

Although massive interest rate hikes are not to be expected, this means that yields will tend to rise and prices will fall in all areas of the US bond market in the future. "We have to take a close look at the segment in which opportunity and risk still stand in an attractive relationship to each other", erläutert Klein.

However, the round sees a real risk in Donald Trump's tax reform. "Imagine that this is once again driving the US economy, which is already doing well, massively. If this leads to overheating, the FED would have to raise key interest rates faster and more strongly than is now anticipated. Then we'd have a problem," Borgis reflects;

"The ECB's measures are about three years behind the FED," Trefz points out. "It will not set its bond purchase program to zero until the end of 2018," adds Siller. But it will still be a long time before the ECB - like the FED today - sells bonds. "We won't see that until the end of 2020 at the earliest," says Martin Klein. The Lerbach Round considers June 2019 to be the realistic date for the first interest rate step. "But only if the economy continues to run," notes Klein, "the first leading indicators are currently crumbling. If this continues, we can forget to raise interest rates in 2019."

Has the ECB perhaps already missed the moment to withdraw from its crisis monetary policy? "At least an adjustment of the negative deposit rate for banks from currently minus 0.4 percent to zero percent should be possible," criticizes Jäggle. In the assessment of the experts, the ECB therefore clearly comes off worse than the FED. "The high national debt is always cited behind closed doors as an argument for the fact that interest rates cannot be increased," Trefz reflects, "but is that true at all?

"Look," explains Siller, "the average coupon on Italian government bonds is 3.30 percent. Ten-year government bonds, however, are currently yielding 1.80 percent. Even if the yield rises by one percentage point, Italy's > state would still be relieved." In other words, the ECB would have long since had the leeway to raise interest rates.

Will ECB policy change if Jens Weidmann replaces Mario Draghi as ECB President in autumn 2019?" "His election would at least be a sign of solidity," says Borgis, "but Weidmann does not decide alone, but together with a committee. The question will therefore be whether he shapes the office or rather the office him." Jakob Trefz starts from the latter: "I think he will continue along the ECB's path, no more and no less. He doesn't really have much leeway."

// 08. What does ECB policy mean for the capital markets?

According to the professionals, monetary policy in Europe is almost a non-event for investors. "The ECB has already reduced its purchasing program from 80 to 60 to 30 billion euros per month without much happening," explains Schott. "Even if it doesn't buy anything any more soon, there is great demand worldwide for government bonds with first-class credit ratings. Die will absorb every newly issued paper," says Siller, "so I can't imagine more than one percent of ten-year federal bonds." "And for the stock market this represents kein Problem, since it might come further to a widening of the valuation", ergänzt Jäggle. 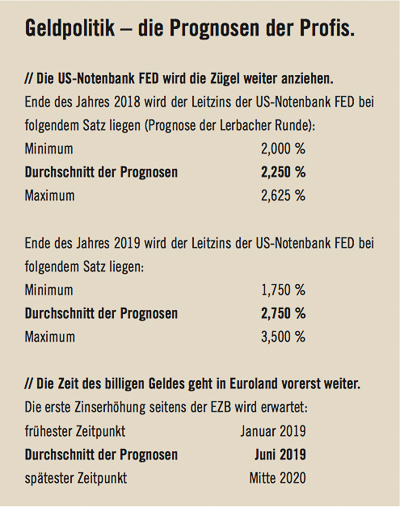 More than the concern about rising yields, the Lerbach Round is pushing another question. Ist Does the ECB still have any capacity to act in the event of a renewed downturn? "The ECB has a real problem," Jäggle says, "somehow it has to get water under its keel again."

// 09. What else can the ECB do at nächsten Abschwung?

"She can't actually buy any more government bonds due to the rule that she can only purchase ein Drittel of a state's outstanding bonds," Siller reflects. Remaining stock purchases to pump money into the system. "As absurd as this may sound, I can imagine it," says Borgis. "The question is whether this would be politically enforceable here," asks Siller. "Actually," Max Schott says, "then a policy mix is called for. Higher government spending would be financed by new bonds, which would then be bought back by the central bank. And if that's not in line with existing rules, they'll be changed." In the long run, according to the experts, it will therefore be almost impossible to abandon unconventional monetary policy;

The conclusion of the Lerbach Round Table: "Next year the bond markets will regain some of their freedom. Investors now have to assess for themselves what is expensive and what is cheap", erklärt Klein. "So far it has made sense to buy what the ECB acquires tomorrow," Borgis adds. "In the future, it will be important to avoid what she sells." "And these are primarily European government and corporate bonds with long maturities," warns Schott.

Buying tangible assets still makes sense. But it is important to take a close look. "With real estate, many properties come onto the market that no longer pay off from the investor's point of view," says Jäggle. "The overvaluation of classic cars and art will also be reduced again with the withdrawal of the central banks," Borgis is certain. "The bottom line," says Trefz, "is that equities are the most attractive asset class. They are no longer very cheap, but moderately higher interest rates should be bearable." "This requires Selektion," Klein sums up: "In recent years, the flood of liquidity has lifted all boats. This will also be a thing of the past on the stock market in the future."       ®