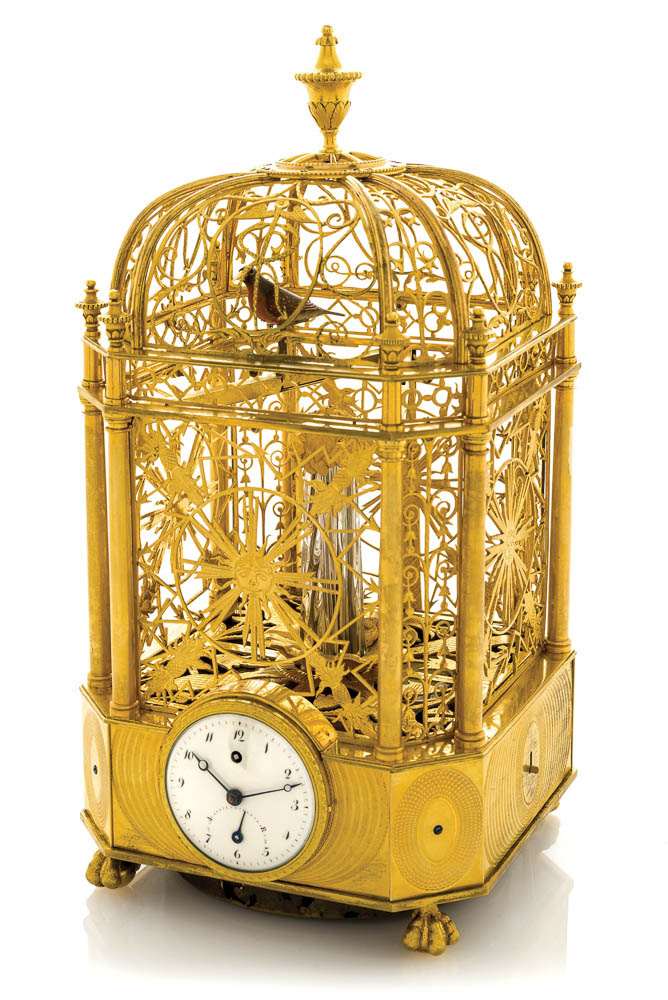 Automaton. More than 150 years ago, talented mechanics began to recreate living beings in artistic automatons. These songbirds, humans and dogs master the most complicated movements and patterns. However, their performance only knows one direction - upwards.

The bird is tiny - but flutters around in its golden cage. He twirls loudly and cheerfully - just as if he were alive. In fact, however, he is a machine. His touching singing arises from a complicated interplay of bellows and flutes, controlled by a delicate wheel-and-lever movement that invented a technical genius more than 150 years ago: Pierre Jaquet-Droz.

Jaquet-Droz, born in 1720 in the Swiss Jura, first studied philosophy before turning to watchmaking and vending machine construction. Since the late Middle Ages, movements had not only moved hands, but also figures. Round and round. Or back and forth to the beat of escapement.

Pierre Jaquet-Droz perfected the so-called "Automaton" with scientific and meticulous attention to detail. Now mechanical marvels were created, which seemed to move irregularly and therefore seemed to be alive. Birds the size of a hummingbird, housed in a golden snuffbox, jumped out when opening and sang. Shepherds played melodies on the flute. Constructors and craftsmen created dancing animals, glistening waterfalls and perfectly synchronized string quartets.

At the courts of Europe and in its capitals the vending machine builders demonstrated their most difficult creations for a fee. Jaquet-Droz himself, for example, built three androids - 70-centimeter-high human replicas - that can write, draw and even play an organ. They can still be seen today in the Kunsthistorisches Museum in Neuchâtel.

"However, it was mainly smaller works such as the songbird cages and music boxes with moving scenes that were sold," says Stefan Muser, owner of the auction house Dr. Crott, who also looks after this niche in addition to historical timepieces. The collectors of such pieces are not only pleased with the technical finesse and the elaborate decoration. They also value them as testimonies of intellectual history. And as a lucrative investment.

The chirping little bird - Jaquet-Droz built a few of them - achieved about 300,000 dollars at an auction at Antiquorum a few years ago.

A pair of pistols made around 1820 by the Rochat brothers, from which not bullets but miniature singing birds shoot out, went to a collector from China for six million dollars at a Christie's auction in 2011. 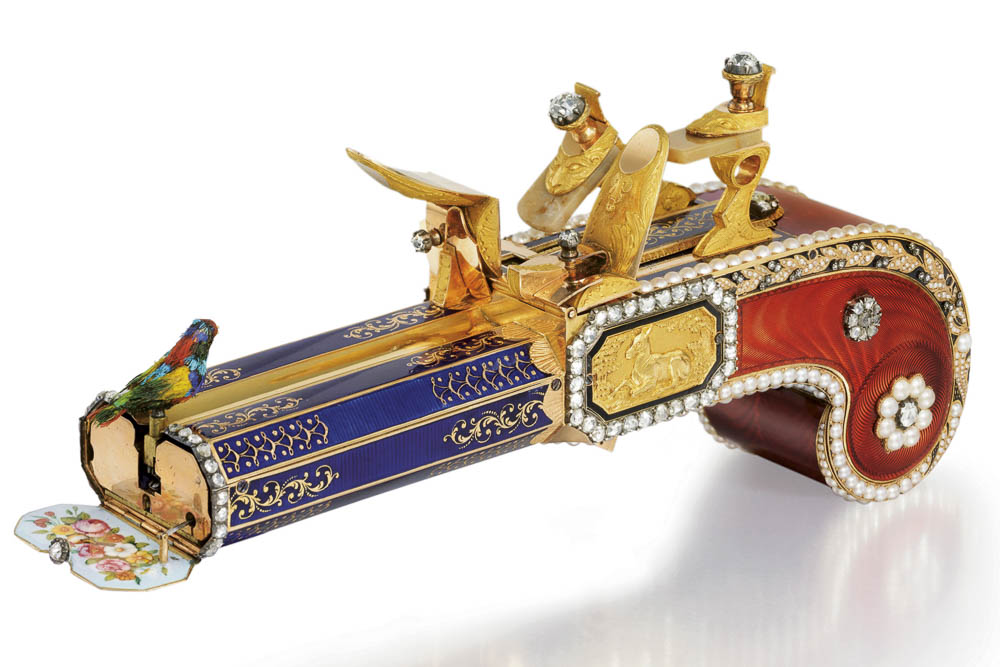 Stefan Muser himself auctioned a singing bird box in 2013, also by Frères Rochat, which was made around 1815 for the Chinese market. She brought 475,000 euros. "Of course, it's hard to give averages. But the fact that the value of the can has doubled within 15 years is already representative of this genre," explains the expert.

The price increases of recent years are mainly due to two circumstances. "First, the stock of first-class pieces from the 18th and 19th centuries is very small," Muser informs, "even attic finds or flea market bargains are very unlikely in this area." And secondly, the scarcity of supply over the past 20 years has met with increasing demand from solvent collectors, especially Chinese collectors. A penchant for mechanical marvels has a long tradition in the land of the centre. Since the end of the 18th century, they have been among the most valuable export goods in Europe. Andersen's fairy tale of the emperor's mechanical nightingale may have an echo on it.

"Today, Chinese collectors again dominate the market," explains Muser, "they don't enclose the treasures in safes either - like German collectors do - but proudly display them in glass showcases of their clubs." It is said that in some of these exclusive meetings, permanent watchmakers took care of the perfect condition of the delicate antiques.

Those who search intensively for it will still find interesting pieces even from the early days of vending machines for five-digit amounts. "These were at first, in the Renaissance, an ancient German speciality", explains Muser, "they came from Augsburg, Nuremberg or Prague, the scientific centres of their time".

The fire-gilded table clock, for example, which Dr. Crott bought last spring for 45500 euros, comes from southern Germany. "On the hour, the man in the centre moves his head, the strange bestiary of dog, panther and three rabbits runs in circles, jumps up and down," the expert says. "Such pieces were offered by the designers to an exclusive clientele and have a corresponding provenance history: cardinals, princely houses, grand merchants." 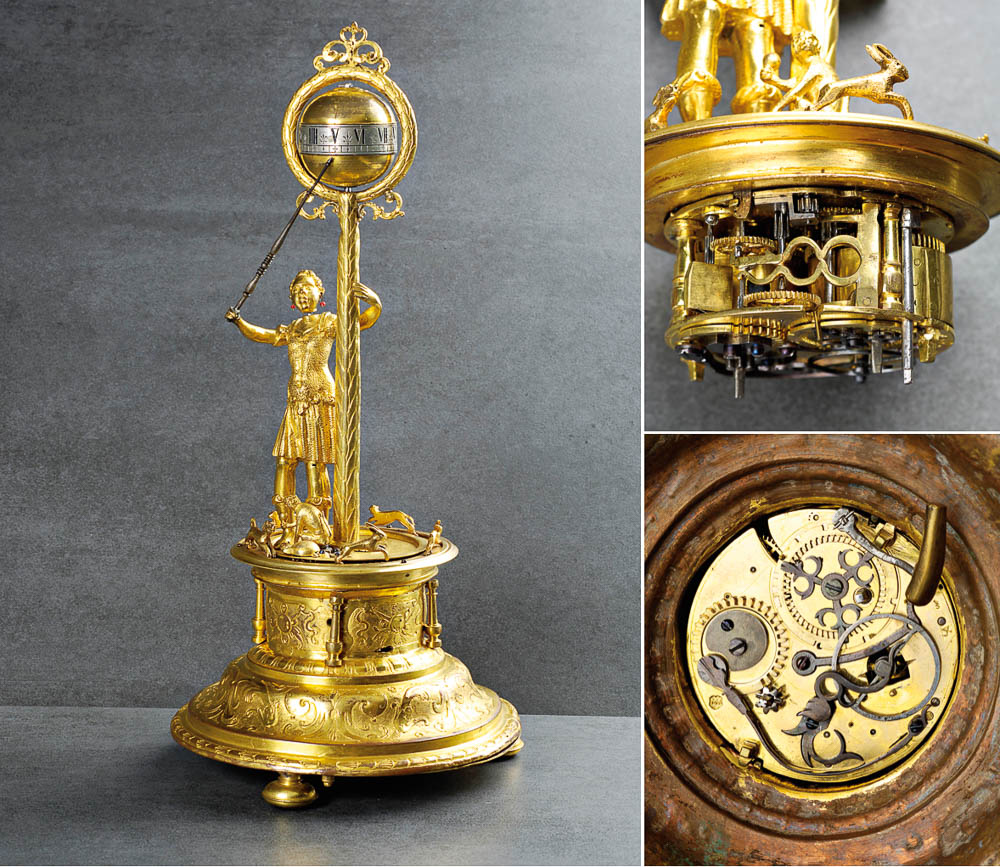 The mechanical and energetic basis for these amazing feats is provided in many cases by movements. The moving scenes, however, are far more than just an accessory to time measurement, they are the astonishing main theme of such a piece.

"Collectors therefore need a much higher level of expertise than when purchasing historical watches," explains Stefan Muser, "after all, the buyer must be able to accurately assess the entire complexity of the construction and its condition. For if there were problems with ancient mechanics, there might be "a handful or two specialists" in the world who could restore such things.

They buy for quality and prominent authorship. However, this is often difficult to clarify. Many vending machines of the 18th and early 19th centuries are not or only unclearly signed. "Sometimes we have to be almost detective in order to determine the exact position," explains Muser's colleague Susanne Benz. Before the last Dr. Crott auction, she had analysed a can with a mythical motif that could have come from Jean Abraham Lissignol, a master enamel painter. Only - at first it was not possible to prove his authorship. "We finally discovered his signature," recalls Susanne Benz, "which was finely inscribed microscopically into the hem of a red cape."

A new generation of vending machine manufacturers is now making sure that the offer for lovers does not dry up completely. At this year's SIHH, the Geneva Salon for Fine Watchmaking, a completely watchless product from the collaboration of MB&F, Reuge and Nicolas Court was one of the talking pieces: "Kelys & Chirp" is the name of the unequal pair of a slow waddling mechanical turtle and a tiny bird jumping out of its shell - fluttering and fluttering. The 72 copies of the limited series cost 49900 Euro each - possibly an investment in the collector's future.

And somehow there is still hope for a great discovery. Because not all of the documented important Automaton's whereabouts are known. The "forefather" of mechanical songbirds, Pierre Jaquet-Droz, for example, is said to have performed not only his androids at the courts of Europe, but also a "grotto" that seems lost: a miniature landscape full of amusements, musicians, waterfalls and of course singing, fluttering birds.

Should parts of this miracle still lie unrecognized in a castle depot, they would be a sensation. And worth several fortunes;

Automata - the world as mechanical theatre.

The French revolutionary Jean Paul Marat leafs comfortably through a pile of manuscripts, naturally in the bathtub. A sheep family lives in the middle-class penthouse idyll. A butcher cuts lamb chops underneath with an axe.

The automata with which their creators gloss world history and literature - Marat was actually murdered in the bathtub - are distant relatives of the Automaton, just as amazing and entertaining.

Art historian Schnuppe von Gwinner has been dealing with this niche in the art world since the turn of the millennium and also knows the early, mostly British protagonists of the scene. "Paul Spooner was inspired in the 1980s by his wife's mechanical looms, and then developed increasingly complex scenes from mythology and (art) history on the basis of the wooden gears, levers and cam disks. Or he could come up with his very own gameplay, often with a very sarcastic sense of humour."

Around Spooner soon arose a whole scene of Automata artists. "These are all real nerds," smiles von Gwinner: "Many were actually teachers, as can be seen not only from the educational material quoted, but also from the educational intention. And even if many artists took tin toys from the 1920s as a model or satirize the mechanical wonders of the 18th century like Pierre Mayer (a little boy is hidden in his genre-typical oriental chess player) - the automata are not driven by a mainspring like the historical pieces, but by a hand crank.

The observer thus immediately enlivens them, experiences the transformation of the simple circular movement into a multitude of different actions. That's why automata are not - like their predecessors - high-tech of their time, but decidedly low-tech. And the designers don't make a secret of their construction plans either, but show them on YouTube.

Highly complex individual pieces can cost around 20000 Euros and are sold worldwide. But an active collector's scene competing for the best works at auctions has not yet emerged, says Schnuppe von Gwinner: "Probably hardly any of the artists has ever achieved a comfortable living with their work.

In her online gallery Craft2eu, von Gwinner herself offers works by Robert Race, among others, who works very minimalist with flotsam and jetsam. The London Cabaret Mechanical Theatre also sells the works of various Automata builders, with prices starting at 40 or 50 pounds.

Some artists have also sought out niche markets. Keith Newstead, for example, is known for his Donation Machines, which are located in the foyers of British museums and collect donations. The insertion of a coin unlocks the crank, which then animates grandiose scenes. When Mary Stuart's executioner needs several attempts to separate the head from the torso, the surrounding court ladies whisper more excitedly from stroke to stroke. Such works are far less cruel than funny because they present the backgrounds of all too familiar narratives.

In addition to a very lively Automata scene in the USA, there are also young talents here and there in Germany. In Hamburg, Birgit Borstelmann creates small spaceships and maritime scenes made of driftwood.

Unlike the historical Automaton, the young Automata are not yet suitable as an investment object. But since their basic principles include a construction that is as simple and solid as possible, they are likely to retain both their function and their artistic added value for many years to come.

How to earn it Dr. Ludger Wess 152
Medical technology. People with donor organs must…