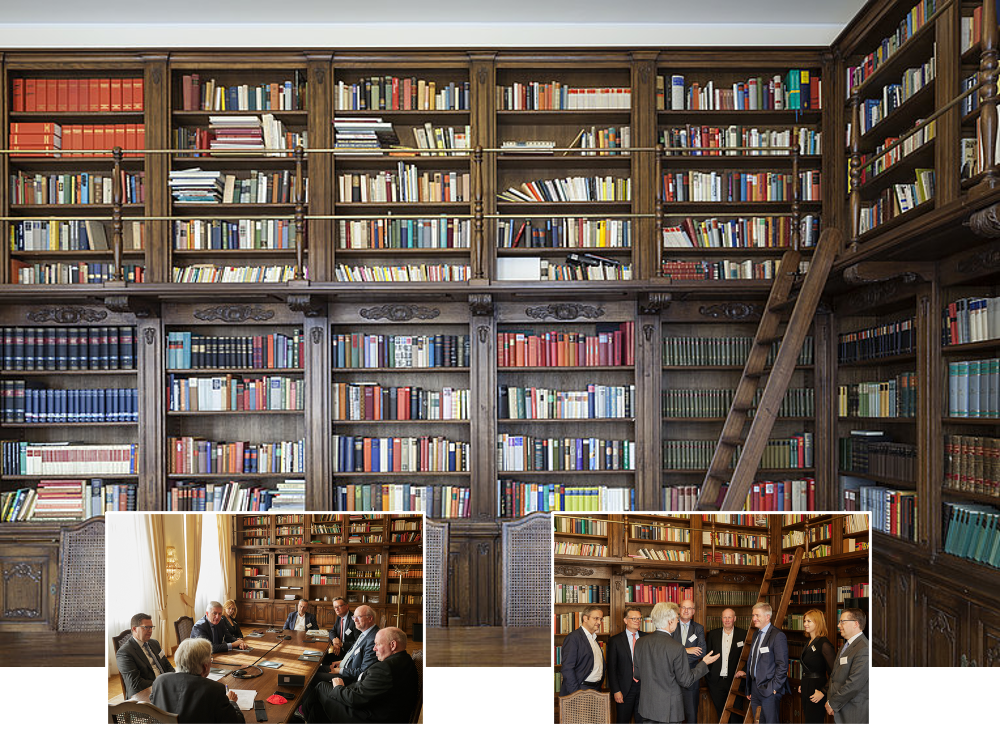 Inflation. Prices are rising faster than they have in 30 years. Is this really just a temporary phenomenon? Or is the genie of inflation now out of the bottle? And above all: how will the central banks react? The Lerbacher Runde analyses.

If the Lerbach Round is to define the question that will decide the investment trend in 2022, the answer is clear: Is the rise in inflation really just temporary, or will prices continue to rise and a real turnaround in interest rates occur? "After all, the current valuations in the equity and real estate markets are hinged on one variable alone - low interest rates," explains Lutz Welge, Bank Julius Baer.

"First of all, we should not overestimate the current figures," classifies Thomas Neukirch, HQ Trust, "twelve months ago, prices were very low due to the pandemic. Now they have recovered again. And that leads to high rates of change in a year-on-year comparison. If we were to look at the last 24 months, inflation would only be around two per cent on average."

To get a handle on the issue, experts advise separating the short- and medium-term outlooks. "Looking at the next six months, the picture is pretty clear: Inflation rates are likely to peak in December and then decline again," Welge analyzes. "At the moment, after all, we are seeing a lot of special effects. In Germany, for example, these are the VAT increase, the CO2 tax and higher levies. Globally, these include the tensions caused by the supply chain problems and too little supply in many areas following the Corona restrictions," Thomas Neukirch lists and concludes: "This could subside again in the next six to twelve months, provided that not too many additional effects take effect - such as rising energy prices in the longer term."

After that, however, it will be exciting. "The crucial thing, after all, is when short-term inflation turns into long-term inflation. That has a lot to do with the formation of expectations and with the contracts that are concluded on the basis of these expectations," explains Karsten Tripp, HSBC Germany. The key question is: What will happen in terms of inflation in the second half of 2022?

Karsten Tripp is not at all pessimistic about this. "The price-dampening effects of globalisation, digitalisation and labour market liberalisation will continue to have an impact. If the supply chain problem eases and the supply of goods increases, they will once again come more to the fore."

"However, I already perceive a clear change," disagrees Bernd Meyer, Berenberg, "China in particular has caught up enormously in terms of labor costs. Most of the stabilising effects of globalisation are therefore behind us. And digitalization is also wearing thin." "In addition, there is now the risk of demographics. We will get a dramatic supply shortage in the labor market, especially in Europe. This can lead to a wage-price spiral - especially because the political environment also favours higher wages," adds Axel Angermann, FERI Trust. "At the moment, this is not yet visible in the wage settlements. But that could change quickly if inflation rates stay this high for much longer. And let's not forget: the climate-friendly restructuring of the economy will also push prices up," nods Daniel Oyen, von Plettenberg, Conradt & Cie. Family Office. But Karsten Tripp is not prepared to admit defeat so quickly: "Yes, China is expensive, but India and Indonesia are not. In the physical world, globalisation may be on the decline. But the big, growing sectors of the economy like IT are still going to the lowest-cost locations." And Europe, the panel said, also has a long-term opportunity to dampen the wage problem via smart migration policies.

"We can perhaps agree on the following formula," Daniel Oyen summarized: "In the last ten to 20 years, we have had an inflation rate in Germany of two per cent minus x. In the next ten to 20 years we will have two percent plus x."

In this environment, central banks will slowly tighten their ultra-expansionary monetary policies. "The US Federal Reserve is now starting to reduce its bond purchases. It will be through with that by the middle of next year. And then in the second half of 2022 there will be the first rate hike," Bernd Meyer outlines the roadmap. "The ECB will take a look at that and then carefully follow suit - first with a curtailment of bond purchases, then in 2023 with the first rate hike," adds Neukirch. "It's also high time," Daniel Oyen makes clear, "the next recession is bound to come. The central banks will then need room to manoeuvre again. Coming up with new measures every time to provide stimulus is not a good idea."

Getting this done sounds easier than it is likely to be. So far, central banks are suggesting they have the situation under control. "But we have to remember that for a long time their only objective was to maintain price stability. Now that goal system is greatly expanded - secure sovereign financing, provide for growth, full employment, green transformation," Tripp explains, "there's a risk of policy mistakes even for the best central bankers."

Things could get more turbulent as early as the summer of 2022: "Inflation rates come down first. And everyone is happy. But then they will rise again. That will then be the real surprise," Meyer outlines. "And depending on how big X turns out to be, the more difficult the balancing act then becomes for monetary policymakers," Oyen predicts. "Should central banks act, it will be wilder in the markets," Angermann clarifies, "but if they do too little - and it looks like they will - this can lead to a loss of confidence in our monetary system. That can build up. And whether we then find a relaxed equilibrium between two and three percent inflation, I think is very questionable."

// What does the new inflation regime mean for investors?

"We are now, of course, already seeing a cautious turnaround in interest rates. But as long as inflation stays within the range we expect, it poses little threat to the investment markets," Neukirch is convinced. "A certain amount of inflation is good, after all," adds Welge: "For capital investors in particular, one to three percent has always been a kind of sweet spot - the best of all worlds." "This time, there is the added factor that real interest rates would probably remain permanently clearly negative. That would be ideal for the economy and businesses - high nominal growth with extremely favorable financing conditions," Tripp says. "The pressure on investors to get out of nominal assets and into real assets will then probably be even greater," Welge adds.

"If inflation rates stayed above three percent for longer, however, it would become critical at some point," Angermann makes clear, "yields on bonds with longer maturities would rise and valuations on the markets would fall. The stock market environment could then become noticeably gloomier." "So the real interest rate is actually the crucial variable that investors need to pay attention to," Meyer sums up: "If it remains strongly negative, everything is fine. If the central banks make sure it goes back towards zero, all assets will suffer."

But what if it comes?

Inflation rates that are well above three percent in the medium term are not the base scenario of the Lerbach Round. But for the majority of experts, this still represents a risk that cannot be ignored. Which investments are a protection in the portfolio, if the inflation comes nevertheless more strongly than expected?

According to the panel, those who expect higher inflation rates should focus on equities of companies with unique selling propositions and high pricing power. Gold and commodities, especially industrial metals, would then also be interesting. In this case, Daniel Oyen advises inflation-indexed bonds and strategies that profit when volatility increases. "Betting on falling prices in government bonds is also a hedge," adds Bernd Meyer. Karsten Tripp favors bank stocks and reminds us that there are countries that are less inflation-prone and whose currencies should therefore hold up better - he cites the yen as an example.

How to earn it Silke Lauenstein 526
In the latest issue, private wealth told the…