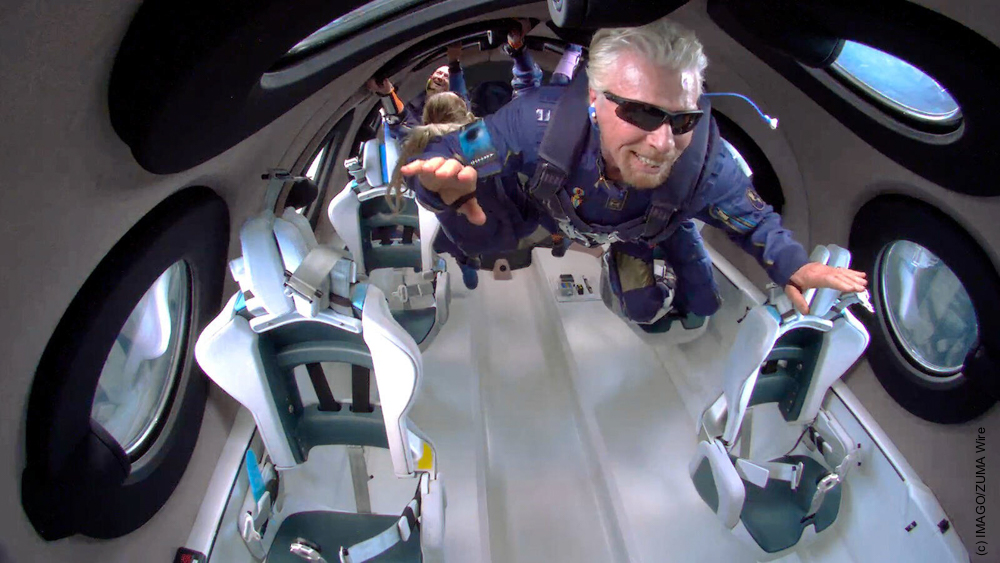 Space stocks. The first tourist flights into space have aroused interest in the investment theme of New Space. But there is much more to it than that: navigation and communication possibilities based on satellites, the observation of climate data from space or the exploitation of new sources of raw materials are fascinating development opportunities. There is enormous potential for the companies involved.

Space, endless expanses. The year is 2021, and these are the adventures of private spaceship captains who are giving tourists a glimpse of the Blue Planet and exploring whole new business opportunities.

This July, Virgin Galactic, the company owned by British billionaire Richard Branson, launched into space. On board: the founder himself and first tourists. However, the rocket only reached an altitude of 85 kilometers. And even though the passengers were thrilled, strictly speaking this does not yet count as space travel. This is because the so-called Kármán line, which separates aeronautics from space travel, is at an altitude of 100 kilometres.

A few days later, Amazon founder Jeff Bezos' Blue Origin did it better: its "New Shepard" launch vehicle flew beyond the Kármán Line with the founder, his brother and tourists on board.

Wealthy individuals are willing to pay a lot of money for such an experience. At an auction in June this year, one bidder bought participation in the Blue Origin flight for $28 million. At Virgin Galactic, an hour-and-a-half flight is said to cost around $250000 on average. According to media reports, the company already had about 600 bookings earlier this year. So for the providers of such flights, the effort can actually pay off.

Nevertheless, according to a UBS study, space tourism accounts for only about five percent of the total turnover in the New Space sector. The analysts currently put the current volume at around 450 billion dollars. By 2030, it is expected to be twice as much - around $900 billion. "In a broader context, New Space today is primarily about civil and military navigation and communication possibilities based on satellites," explains Jürgen Brückner of FV Frankfurter Vermögen AG: "But if we look further into the future, the use of other celestial bodies to develop raw materials will also be added."

Then there are hardly any limits to the imagination. "The value of the asteroid belt between the orbits of Mars and Jupiter is estimated at 700 quintillion dollars," explains Rolando Grandi of French asset manager LFDE. A quintillion is equal to a billion trillions, or a 1 with 30 zeros after it. Asteroid mining is therefore the stuff of future dreams.

Experts at the German private space company OHB have worked out theoretically how this potential could be exploited. At some point, they write, a small unmanned spacecraft with a few robots will fly to a near-Earth asteroid. There, the robots will mine resources needed on Earth. Because there are also metals, water and other materials, the robots can build a larger spaceship on the asteroid, extract fuel and eventually return to Earth with the raw materials.

Assembling the spaceship on the asteroid is a crucial aspect. After all, leaving the Earth's atmosphere with a cargo spaceship would be almost inconceivable.

Of course, this is still science fiction. But already today there are very real reasons to bet on a massive expansion of space travel. According to the LFDE, some 1200 satellites were launched into space in 2020 alone, with another 850 added by the end of May this year.

And according to the United Nations Office for Outer Space Affairs, 7389 satellites were orbiting the Earth at the end of April. "With them, it will be possible, for example, to close the last gaps on Earth that still exist in Internet services and communications," informs OHB's Carsten Borowy. Around 1800 of the satellites currently in orbit are already being used for communications.

Korus concludes that satellites and their performance have therefore become an indispensable part of our daily lives. By 2030, according to scientific estimates, some 100,000 satellites will be orbiting the earth. The beneficiaries will be the operators of the satellite networks. SpaceX, for example, wants to equip airplanes or ships with Internet connections in this way - a first business model.

What is particularly interesting for investors is that the entire field of space travel is moving away from purely public-sector clients towards the private sector. This commercialization ultimately reduces costs. For example, if used rockets are partially reused, the next rocket launch is cheaper.

Twenty years ago, it cost about $25000 to launch a kilogram of weight into space; today, it's only about $2500. And according to Hélène Huby, CEO of The Exploration Company, the price should drop to $250 in the next five years. That would give the industry another boost. A doubling of sales, as UBS expects, therefore does not seem unlikely.

In this case, there would be enormous growth potential for companies in the new-space environment. The fact that investors are rewarding this is shown by the example of SpaceX. Tesla founder Elon Musk's space company is investing heavily in the space tourism sector, but is also working on complete communications coverage on Earth with its Starlink satellite network. As CNBC recently reported, SpaceX shares of the unlisted company changed hands for $560. That pushed the space company's value up to more than $100 billion.

SpaceX, Virgin Galactic and Blue Origin are only the most spectacular and well-known examples. Overall, entire ecosystems are being created around each of the New Space sectors. French asset manager LFDE has identified four potential investment themes that investors can roughly follow.

The first area comprises those companies whose activities are carried out from space. They explore space and monitor certain developments on Earth. Here, for example, we are talking about ever-improving satellite imaging techniques using artificial intelligence and machine learning. "In this way, environmental changes can be analyzed to better predict natural disasters," Grandi says. Companies offering such technology include Maxar Technologies and Spire Global.

The second area concerns companies that create a link between the earth and space. The main focus is on telecommunication systems or transport into space, although this is currently limited to sending satellites. An example of the latter is the US company Astra, a manufacturer of launch vehicles, which, according to LFDE, is developing a revolutionary technology that can send objects from any point on Earth to space stations, for example.

Another is Rocket Lab, another pioneer among small launch vehicle manufacturers. The company, which has launched a total of more than 100 satellites into space this year, has grown by more than 200 percent since the beginning of 2021.

LFDE estimates annual industry revenue for this entire sector at around $62 billion in 2019. It is expected to grow by an average of almost ten percent per year until 2027.

The experts summarize another segment under the topic of transversal technologies. In the future, things needed in space will be manufactured directly on site, i.e. in space itself. At the end of last year, ceramic parts were produced for the first time on the ISS space station using a 3D printer, which saves costs because they did not have to be transported there from Earth. Groups such as Unity and 3D Systems now offer printers that can be used to produce space-specific equipment in space. These technologies also include cloud computing or industrial design software.

Finally, there are the profiteers on Earth. One example is John Deere, manufacturer of agricultural machinery. It uses satellite data for precision agriculture. This enables better weather forecasts, optimisation of water management or more efficient farming - for example, through autonomously driving tractors. GPS company Garmin should also benefit from these innovations.

While this still sounds "down to earth", many other developments still seem far away. Investors who want to bet on them therefore need a lot of staying power - and a lot of imagination. But it can be worthwhile to be there when innovative companies advance many light years away from Earth into galaxies that no human being has ever seen before.

As always with brand new, innovative topics with earnings prospects far in the future, it is difficult to estimate their valuation. Volatility in such areas is correspondingly high. Take Virgin Galactic, for example: its share price climbed from around $16 to $55 between mid-May and June of this year. Now, however, it has recently slumped sharply to below $20 because the company says the start of commercial operations will be delayed from the third quarter to the fourth quarter of 2022.

"One shortcoming is that there are otherwise only a few pure new-space companies on the stock market," says Jürgen Brückner of FV Frankfurter Vermögen AG. Accordingly, the key analysis task is to determine how much of a company's revenue is in this space. "Among the few companies that are exclusively active there are the German firms OHB and Mynaric, a manufacturer of laser communications equipment for airborne and space-based communications networks," the expert adds.

A fundamental problem, however, is that in a rapidly evolving and changing field, technology changes rapidly. No one knows today who future winners will be and who will ultimately prevail. Accordingly, diversification is the key to success. Exchange traded funds on the market can therefore be an interesting investment alternative: For example, LFDE's Echiquier Space (ISIN: FR0014002VF5), which takes ESG criteria into account when selecting stocks and excludes manufacturers of controversial defence equipment, or ARK Space Exploration and Innovation (US00214Q8078), which basically covers the same topics as the LFDE fund, but also invests in defence companies such as Lockheed Martin, where space accounts for less than 20 per cent of sales.

Pure plays, companies that are entirely focused on space, are what the HAN ETF Procure Space (IE00BLH3CV30) aims for. That includes satellite and space technology or rocket makers. However, as all three were only launched during the course of this year, they do not yet have a meaningful history.