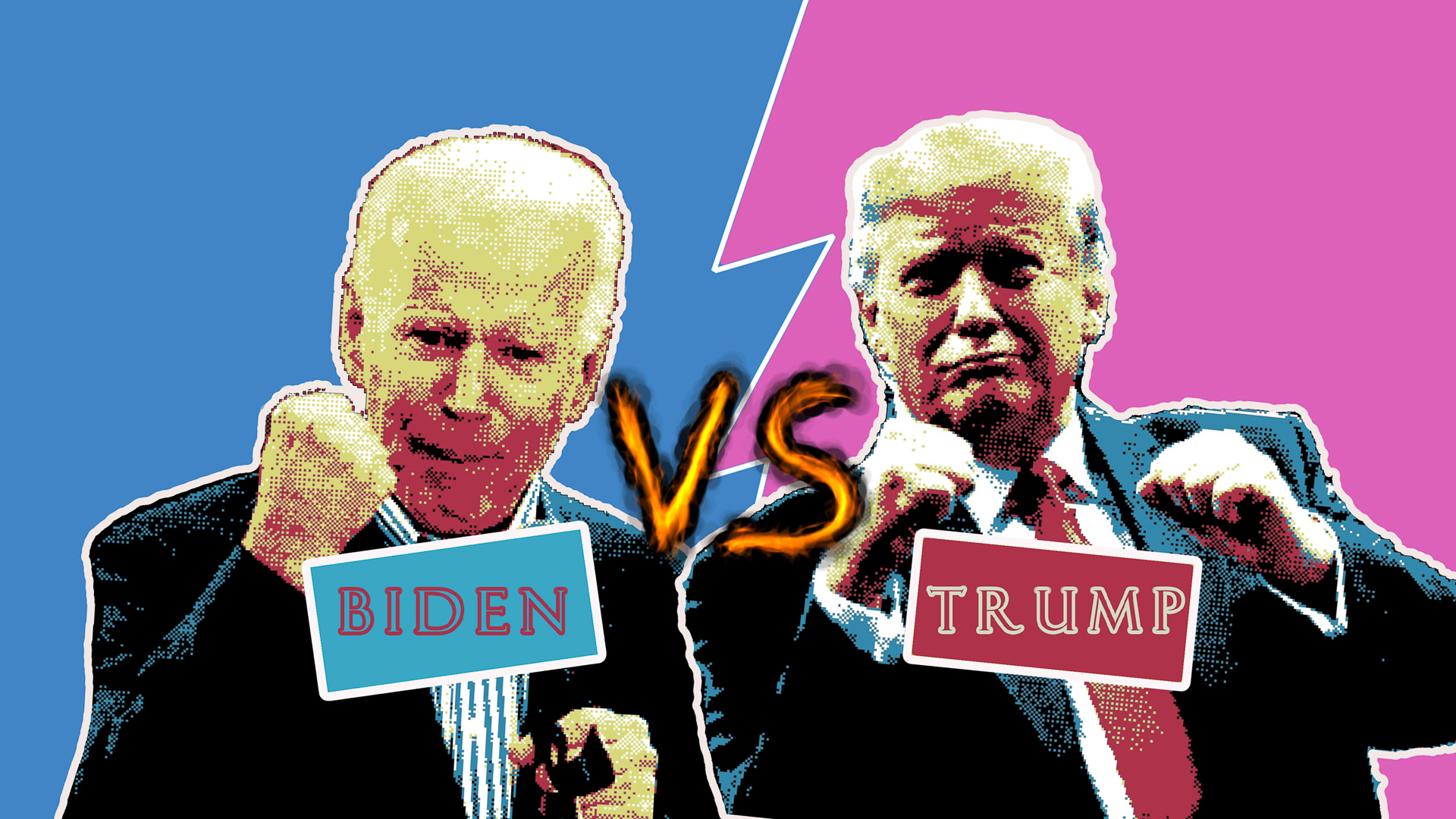 US elections. Presidential elections will be held in the USA in autumn. Carolin Schulze Palstring, Head of Capital Market Analysis Metzler Private Banking, examines the candidates' election chances as well as possible effects on economic and monetary policy.

Only a few months ago, a re-election of Donald Trump seemed almost certain. After all, US citizens tend to re-elect incumbents - at least as long as the economic situation is good. "Of the twelve presidents who have run for a second term since World War II, nine have been confirmed in office," informs Carolin Schulze Palstring, Head of Capital Market Analysis at Metzler Private Banking.

The three candidates who were not re-elected were Gerald Ford, Jimmy Carter and George H. W. Bush. Under Ford, the famous stagflation had occurred, a combination of sluggish economic growth and high inflation. During Carter's term of office, the aftermath of Volcker's interest rate hikes was felt. And in the Bush era, the American savings system collapsed. So every time the economy was in trouble.

Ray Fair, Professor of Economics at Yale University, has been analysing US data since 1916 and has found that the economic situation and inflation trends in particular are decisive for the majority situation in Washington. "Based on his model, we therefore simulated various scenarios for the outcome of the elections this year," explains Schulze Palstring. The result: If gross domestic product and prices had developed in 2020 at the average level of Donald Trump's previous term of office, a second legislative period would have been as good as certain for him. With the outbreak of Covid-19, however, this is no longer realistic. "If the US economy falls into a deep recession - as most observers currently expect - and inflation temporarily eases somewhat, his chances of re-election will drop dramatically."

There is, however, a glimmer of hope for the Republicans: if the economy were to recover quickly in a V-shape following the recession, the President would still have a realistic chance - according to Fair's model. "The reelection of Donald Trump is directly linked to economic developments. It is therefore likely that the current government will continue to do everything it can to support the economy and avoid turbulence in the financial sector and waves of corporate insolvencies," Schulze Palstring is convinced.

After all, there is much more at stake in these elections - and many observers are not even aware of this - than just the next legislative period. "It's about staying in power in the next decade."

It's already apparent that Democrats are benefiting more from demographic change than Republicans. Liberal-oriented strata of the population, which generally also includes ethnic minorities and young people, are growing steadily, while the classic Republican Party electorate is shrinking proportionately. The latter include mainly white and elderly people. 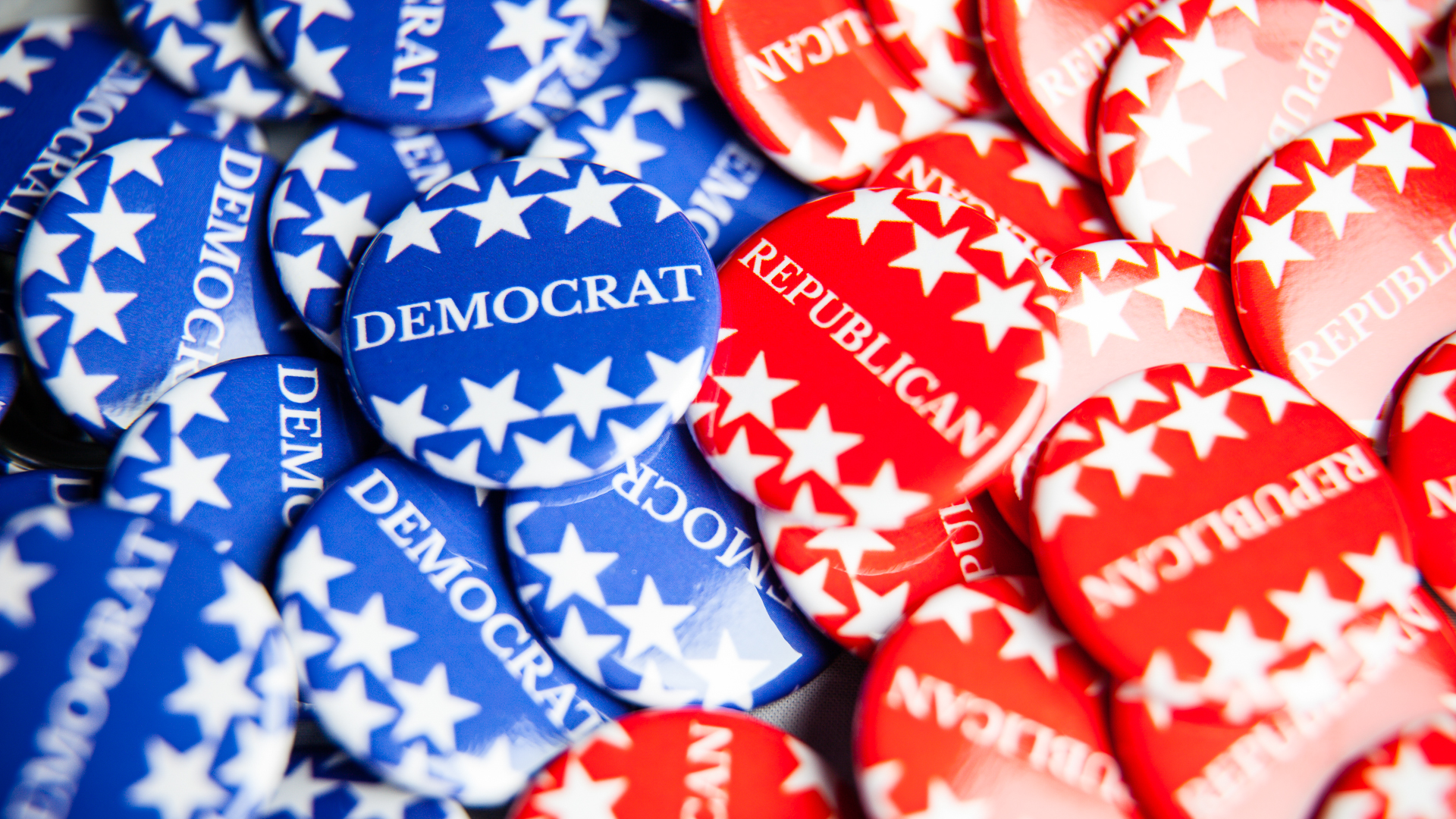 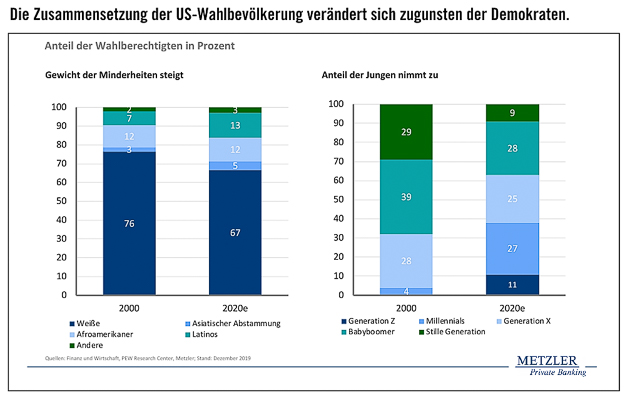 Nevertheless, the "Grand Old Party" (GOP) could, by means of a political trick, succeed in securing political majorities in the long term - contrary to the population trend. In the USA, the relative majority voting system, also known as the "Winner takes it all" principle, prevails. The principle is that the candidate who has received the most votes in his or her constituency is elected. All votes that were not cast for the winner are lost. Depending on how the voters of the parties are distributed regionally, the election results can therefore differ greatly from the actual proportional representation in the population as a whole.

This is why the major parties try to gain advantages by skilfully tailoring constituencies. This is possible because in many states the ruling party is allowed to determine the constituencies more or less arbitrarily every ten years on the basis of a new census. They only have to have the same number of inhabitants and no discrimination against ethnic minorities is allowed. The results of the next census will be available in December 2020. The privilege of redefining the constituencies therefore falls to the winner of this year's elections.

An evaluation by the Center for American Progress shows that the Republicans in particular have recently benefited from constituency redefinition. In the last three Congressional elections in 2012, 2014 and 2016, an average of 59 seats were redistributed based on constituency cuts alone. Of these, 39 went to the Republicans and 20 to the Democrats. So "net" means the GOP gained 19 seats.

At first glance, that doesn't seem like much. But these 19 seats represent about 14.3 million Americans and are representative of the population of the 13 smallest US states. "The conclusion is that a Republican election victory this year will also increase their chances of remaining in power in the next decade, even against the demographic trend," says the expert.

Of course, this connection has not gone unnoticed by the opposing Democrats. According to an analysis by the University of California, Irvine, they have therefore recently filed more lawsuits against allegedly repressive election laws and constituency cuts than at any time since the evaluation began in 1996. Their problem: fundamental decisions in the USA are usually made by the Supreme Court, which is currently rather Republican in character. Five of the nine judges in office belong to the conservative camp.

In the future this balance of power could even shift further. The Supreme Court judges are appointed for life. Resignations are therefore often only made for health reasons. Two of the four incumbents appointed by the Democrats are over 80 years old. If there are any vacancies in the coming legislative period, the new president may, with the approval of the Senate, fill these positions. So a Trump election victory could mean an enormous gain in power for the Republicans.

The same applies to the US Federal Reserve. The Federal Reserve's governing body consists of seven people. In the past three years Donald Trump has appointed three new members and made Jerome Powell chairman. Since two positions on the board are currently vacant, of the current Fed members only Lael Brainard was not nominated by Trump.

In the next legislative period, the new President may reassign the posts of Chairman and Vice-Chairmen. And appoint successors for Michelle Bowman, Richard Clarida as well as for the two vacant positions with a term of office of 14 (!) years each. In short: Should Donald Trump be re-elected, he would have the opportunity to leave his mark on the Fed for the entire decade.

"The consequence would probably be a long-lasting tendency towards a low interest rate policy," Carolin Schulze Palstring makes clear, "in the short term this may be right and important to stabilize the economy in times of corona. In the long term, however, this will lay the foundation for the next crisis, as macroeconomic imbalances, for example in the form of debt or property price excesses, will grow."

In view of the massive institutional scope for action, it is to be feared that the two parties will be more open in their election campaigns than ever before. A constructive cooperation after the elections is therefore unlikely. "For the medium-term economic outlook it is therefore less decisive which party wins the elections. ...but rather whether the winner of the election will also control Congress."

While the president has prerogatives in foreign policy and in the nomination of officials (Fed, Supreme Court), he depends on Congress for domestic policy and budgetary legislation.

If the President used to control the entire Congress, he implemented more than half of his plans in his first year in office. In a power-sharing situation, the implementation rate dropped to as low as 25 percent. "If the next president does not have a majority in Congress, only a minimum consensus can be achieved on domestic policy. "The United States would be paralyzed. And the president would have no choice but to concentrate on foreign policy - as in the past two years - and govern by decree," Schulze Palstring makes clear.

How likely is it that the previously divided power relations in Congress can be resolved?

In addition to the US President, all 435 members of the House of Representatives and a third of the Senate (33 of 100 seats) will be up for election in the November 3 polls.

In the first chamber of Congress, the House of Representatives, the Democrats have a comfortable majority with 232 seats. The Republicans would have to win 18 seats (plus the four positions that have become vacant) in addition to their existing 196 seats in order to win the election. According to the Cook Political Report of early 2020, 18 Democratic constituencies are currently in a neck-and-neck race, while only five Republican constituencies are in the process of doing so. The GOP would thus have to win all constituencies with Democratic "wobbly candidates" and at the same time not lose any of its own seats. "Although not impossible in theory, the hurdles to a Republican takeover in the House of Representatives seem very high," the expert concludes.

Conversely, Democrats in the Senate would have to win all four seats with "wobbly Republican candidates" without losing any of their own seats in order to regain the majority there. "That, too, seems unlikely at this time. There is therefore a lot to be said for a further division of power in the coming legislative period," says Schulze Palstring.

What does this mean for the politics to be expected in the future? "Although both parties have different priorities in the areas of health care, immigration, taxation and environmental protection, one thing should be clear: Public debt will continue to rise sharply," says the analyst. "In the coming quarters, a rise in unemployment and corporate bankruptcies will lead to lower tax revenues. This alone will tear a big hole in the public purse if spending behaviour remains unchanged," analyses Schulze Palstring. Moreover, it is to be expected that the economy will require impulses from the state even after the acute phase of the corona epidemic has been overcome.

However, the design of these measures may vary depending on the ruling party: For example, the Republicans are known for their pro-business fiscal policy, which focuses primarily on the revenue side - i.e. tax breaks. Many market participants therefore expect Trump's election victory to provide positive impulses for the economy and the stock market.

What is overlooked here is that the Democrats, too, have economic stimulus packages on the agenda. However, their focus is clearly on the expenditure side of the national budget. Discussions are underway, for example, on infrastructure programs or aid for private households. "A Democratic victory does not therefore necessarily have to have a dampening effect on economic activity in the US," explains Schulze Palstring. Studies by the Congressional Budget Office would even show that higher direct government spending has a much stronger effect on the economy than tax cuts.

The two parties' agendas are also similar on another point: protectionism. According to a survey by the PEW Research Center, more than two-thirds of Republicans, but also well over half of Democrats, view China's business practices critically. 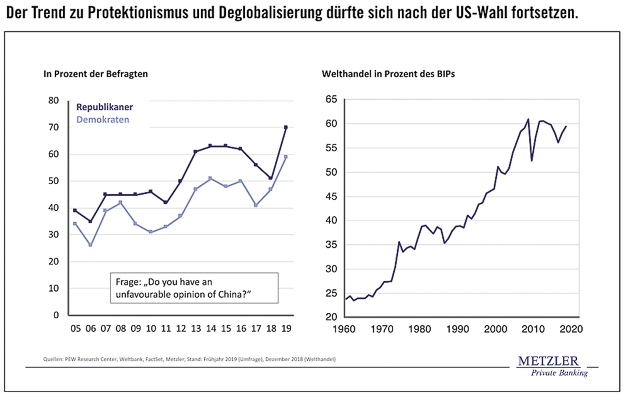 "Even in a scenario of divided power, it can therefore be assumed that the USA will continue its strategy of constant pinpricks and threatening gestures in order to contain China's influence," Schulze Palstring is convinced and concludes: "In our opinion, the hope for a lasting settlement of the trade conflict is therefore unfounded. Rather, it must be expected that the protectionist trade policy of the USA will continue after the elections in November. The trend towards deglobalization is therefore likely to continue."   ®